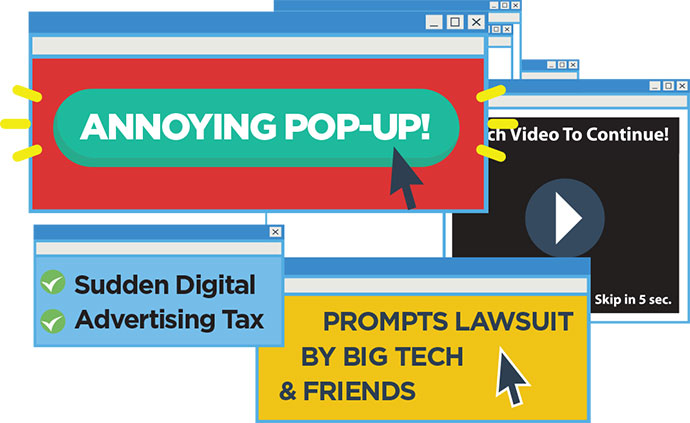 Maryland legislators on February 12 overrode a veto by Governor Larry Hogan to enact a digital advertising gross revenues tax — the nation’s first digital advertising tax. The ambiguously worded law, projected to raise as much as $250 million annually, may be hard to enforce and hard to get past upcoming legal challenges from some deep pockets. But one message is clear as crystal: They want big tech to pay and pay big.

Internet Association (IA) is a 40-plus-member lobbying group for big tech whose members include such firms as Microsoft, Google, Facebook, Twitter, PayPal and Amazon. Six days after the legislative action, IA joined the U.S. Chamber of Commerce, NetChoice and the Computer & Communications Industry Association (CCIA) in filing a lawsuit challenging the new law’s validity.

“It’s unfortunate that the Maryland General Assembly has decided to penalize a handful of out-of-state companies with this discriminatory law,” said IA Senior Vice President and General Counsel Jon Berroya. “This is a case of legislative overreach, punishing an industry that supports over 100,000 jobs in Maryland and contributes tens of billions of dollars to its economy each year.”

The standoff marks a deviation from the state’s standing in tech’s eyes. A 2017 study by IA found Maryland ranked No. 4 in the nation in ease of doing internet business, based on 62 indicators grouped within four theoretical areas: internet business environment, internet accessibility, innovation financing and general business governance. Colorado was No. 1. The study pointed out that Maryland and its fellow runners-up finished out of the top spot “because of less friendly general business governance, which is marked by higher regulatory burdens, and/or by weaker internet business environments.”

Site Selection’s projects database of facility investments by corporate end users shows no major facility investments in the past five years from 42 of the Internet Association’s members such as Microsoft, Google, Uber, Facebook and Paypal, but half a dozen from one prominent member company: Amazon. The projects include 1,000-job fulfillment centers in Hagerstown, North East and Aberdeen, and a site at the refurbished Sparrows Point site in Baltimore that last year welcomed a new 500-job facility expansion after an initial 1,500-job investment in 2017.

Will the new DAT color future decision-making by Amazon in job-creating facilities?

A spokesperson for Amazon demurred on whether the DAT might color future facility investment decisions, referring to the statements by the plaintiffs in the legal complaint. Those statements did not mince words.

“This law is like a toll booth that collects only from new cars and no one else, so any state following Maryland’s awful example will have to refund all those tolls when a court rules that it’s illegal discrimination,” said Steve DelBianco, president and CEO of NetChoice. Among the chief arrows in the plaintiffs’ quiver is the federal Internet Tax Freedom Act, which prohibits discriminatory taxes on internet services and transactions. Maryland’s new law “is facially discriminatory since it imposes this new tax only on digital advertising,” said a CCIA analysis earlier this year, “and not on other forms of advertising such as billboards, magazines, newspapers, radio, and television.” 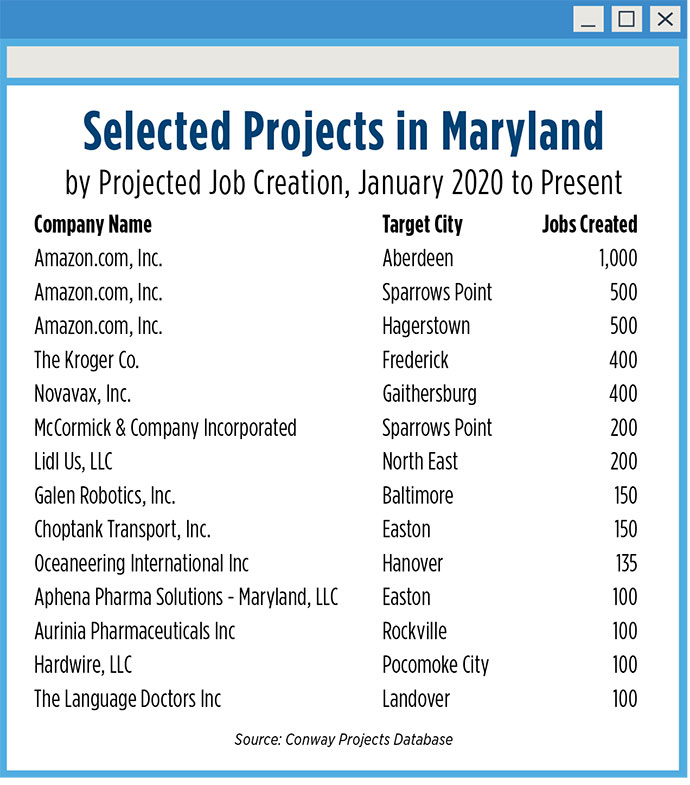 The law’s claim to taxing global revenues vs. revenues earned in the state is another major bone of contention.

“The Maryland state tax aimed narrowly at a few companies but broadly taxing global revenues is concerning both in scope and precedent,” said CCIA President Matt Schruers. Noting the law’s “constitutional infirmities,” he added, “Policymakers looking to fill budget gaps with punitive measures of this nature are setting state budgets up for failure. Digital services make a critical contribution to local economies by providing tools to keep businesses functioning and people connected to school, work and family.”

The 20-page lawsuit cites as the foundation for Maryland’s legislation tax proposals by economist Paul Romer, who has called big tech “too big to trust” and “a haven for dangerous misinformation and hate speech.” However, Gov. Hogan, in his veto of what he and others see as an overreach, called the new measure “misguided” and “unconscionable.”

What Are We — France?

“Although the Act is styled as a tax, several features confirm its punitive character, including its severity (up to 10% of gross revenues), its focus on extraterritorial conduct, the segregation of its proceeds from the State’s general fund, and the legislative history leading to its enactment,” says the lawsuit. “Among other things, the legislative history shows that lawmakers believe that the charge cannot be passed to consumers, and that the targets of the law, and they alone, will bear the burden of the assessment.”

That burden was summed up neatly via an example showing what would happen if the law’s upper limit of 10% of gross revenues were applied:

“The Maryland digital advertising charge applies in addition to Maryland’s standard corporate income tax,” the document continues. “If all of the revenues of the company described in the immediately prior paragraph were derived from digital advertising, the company would be liable for an additional $30 million under the Act — 10% of 2% of $15 billion. That is nearly 20 times the rate of the corporate income tax. And it would more than wipe out the $20 million in profits attributable to the company’s economic activity in Maryland.”

Finally, the complaint noted how several European countries — including the UK, France, Hungary, Italy, Spain, and Turkey — “have proposed or implemented digital services charges (albeit at much lower rates) targeted at American digital platforms. The federal government has opposed these digital advertising charges as both protectionist and a form of double taxation at odds with sound principles of taxation across multiple jurisdictions. For example, federal authorities have objected to France’s digital advertising charge because it, like the Act, has high revenue thresholds that effectively exclude French companies from the charge. The U.S. Trade Representative recently concluded that the French law, which bears close resemblance to the Act at issue here, was ‘highly unusual’ as a tax, ‘unfair,’ ‘unusually burdensome,’ extraterritorial in scope, and discriminatory — together justifying imposing retaliatory tariffs.”

Could such a standoff put in jeopardy workforce development programs in Maryland backed by Amazon and its tech brethren to support such major projects as Amazon’s HQ2 just over the state line in Virginia?

In Maryland, according to IA, some 6,700 companies tied to the internet sector account for 116,000 jobs, and the state’s digital export volume is valued at $980 million. That means a central role for continuing tech skills training, workforce development and STEM skills programming at the K-12 level. Amazon has worked with the Maryland Chamber Foundation and George Mason University on one such program, Amazon Future Engineer, which funds externships for teachers in Maryland, D.C. and Virginia. 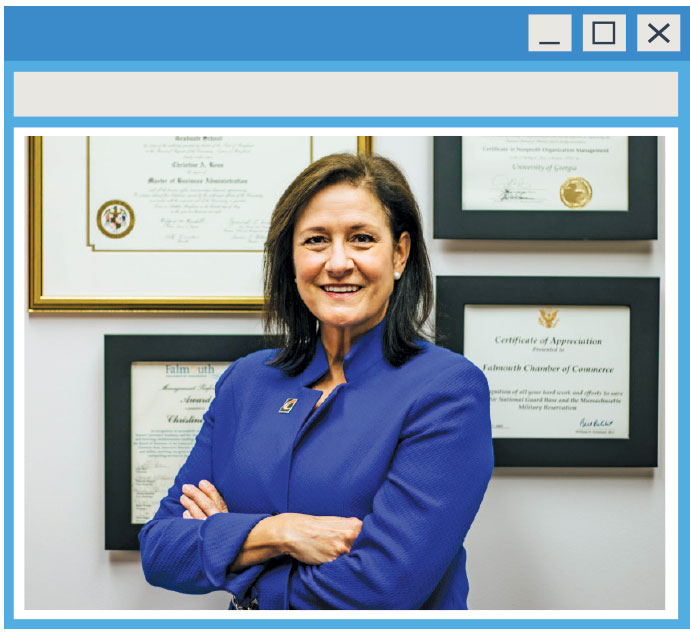 “Amazon Future Engineer will be a much needed and welcomed addition for the students in our County schools,” said Prince George’s County Executive Angela Alsobrooks. “When this pandemic hit our community in March, closing our schools, my concern was and remains the achievement gap that can widen without intervention. This STEM and computer science education will undoubtedly keep our young people on track to continue their education virtually.”

“We strive to make Maryland work better for all Marylanders,” says Maryland Chamber of Commerce President and CEO Christine Ross in response to an inquiry from Site Selection. “Through the Maryland Chamber Foundation, our Teacher Externship Program aims to ultimately give students equal opportunity to earn a living wage while creating pipelines for industries experiencing talent shortages.”

The Maryland Chamber Foundation’s Teacher Externship Program was established in 2019. “Over the last two years, teachers have benefited from externship placements at Stanley Black and Decker, BGE, KCI Technologies, Volvo, Toroid, and Leidos,” says Ross. “This year, we have a list of 21 teachers — and growing — that will be part of this unique and rewarding experience. Participating businesses this year include Amazon, BGE, Cards Technology, DAP, Inc., Freestate Electrical, KCI Technologies, Potomac Edison, UnitedHealthcare Mid-Atlantic and Whiting-Turner.”

How will it all end? Internet Association Senior Vice President of State Government Affairs Robert Callahan said this just after the veto override vote:

“Maryland now has the dubious honor of being the only state in the country to have ever passed such a flawed tax, and the added distinction of doing so in the middle of a pandemic and economic crisis. At least Maryland businesses and consumers can rest easier knowing that the courts will have the last say on this matter, and that the law, not politics, will decide the outcome.”

“We are very concerned about the negative impact that the newly passed digital ad tax will have on small businesses and on economic development in the cyber and tech space in Maryland,” says Christine Ross. “In particular, we worked diligently last session to secure a tax incentive for data centers to locate to our state, and we are concerned over how the new digital ad tax might factor into the decision-making of some of those companies that might have previously been looking to bring their business to us. The long-term ramifications of this bill could be very damaging.”