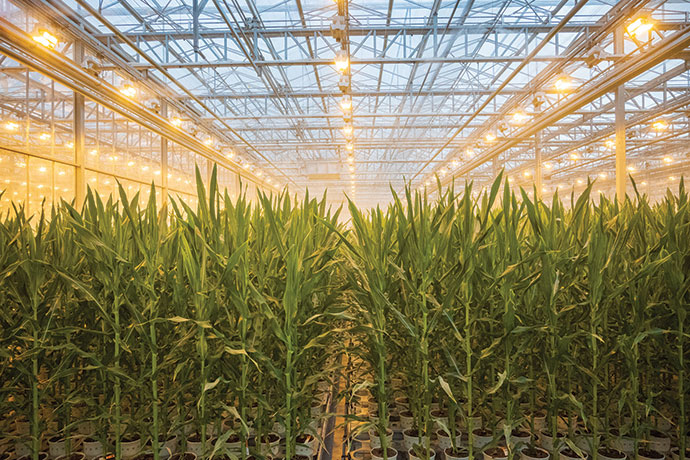 Even in a pandemic year, the Tucson area economy has seen monthly rises in construction employment, and a 10% rise in trade, transportation and utilities employment as recently as December 2020, according to data from the Eller College of Management’s Economic and Business Research Center (EBRC) at the University of Arizona.

Here’s a rundown of some of the projects creating those jobs.

In a television appearance in June 2020, designer Joey Rodolfo didn’t mince words about his former home base in Seattle, where his Buki clothing operation was located less than a mile from the “CHOP,” the Capitol Hill Organized Protest zone established there in summer 2020 that had grown chaotic. He announced he was planning to move his business out of Washington entirely, because of the lack of local and state-level support for businesses.

By October, the luxury technical sportswear company was announcing its move to downtown Tucson, to a facility that was formerly home to successful University of Arizona spinout SinfoniaRx. The project will bring 50 jobs primarily in engineering, marketing, design and sales, and is projected to have an economic impact of $252 million over the next 10 years.

Rodolfo’s outlook for his business is right in tune with his new location.

“My vision is to establish Tucson as the next hub of innovative design not just in fashion, but in health/wellness and wearable tech,” said Rodolfo. “Tucson is business-friendly and offers incredible partnership opportunities. I want to see how we can build a new industry in Tucson, attract suppliers and create the next generation of health and wellness products that make lives better.”

“We welcome Joey and his team at WOW Studios,” said Tucson Mayor Regina Romero. “Downtown Tucson has a ‘cool’ vibe that promotes innovation and creativity, making it the perfect place for developing emerging technologies.”

As reported by Sandvik’s own Gary Davies in a December 2020 article for Fast Company, the company pursued this site selection completely via Zoom. The decision to invest in Tucson came “after countless hours of Zoom negotiations and enough virtual tours to make us question our depth perception in real life,” wrote Davies. The facility will create up to 20 new jobs and focus on making medical wire and wire-based components. In a September 2020 release, the company noted that a move to a location in the Southwest was an opportunity to diversify from its first site in Florida.

“We needed a west coast location near our customers and a superior technical workforce, which we found at the University of Arizona, Pima Community College and Arizona State University. Tucson really checked all the boxes for us,” said Davies, head of the company’s medical business unit, in a Sandvik release. “The decision by Sandvik to expand its operations in Southern Arizona really validates that our position as a biotech center is strong and growing,” said Joe Snell, president & CEO of Sun Corridor Inc., the regional economic development agency representing Pinal, Pima, Santa Cruz and Cochise counties.

“And although it involved a bit more screen time than we’re used to, we’re no less confident in our decision to open a location in Tucson,” Davies wrote in Fast Company. “In fact, we’re planning to replicate the all-virtual site selection process for expansions moving forward, global pandemic or not.”

In March 2020, Bayer opened a new 300,000-sq.-ft., automated greenhouse complex in Marana that will serve as a global product design center for corn. “With our new Marana greenhouses, Bayer is reimagining the way plant breeding is done and setting the standard for environmental sustainability,” said Bob Reiter, head of Research and Development for Crop Science at Bayer. The project was originally started in 2017 by Monsanto, which Bayer acquired in 2018. The $100 million project will employ up to 100 people.

Much of the smart technology deployed at the facility will jibe with “Fourth Industrial Revolution” technologies under study at the University of Arizona.

This Dallas-based developer of communication systems in February 2021 completed its purchase of a 140,000-sq.-ft. manufacturing facility in Tucson, thus advancing its “Made in America” commitment for manufacturing the majority of its 4G and 5G products, along with intelligent battery and backup power supply systems, and its drone and aerostat platforms. The company has begun making improvements and retrofits to the facility, with initial production coming in the first quarter of 2021.

The company received a job training grant from the Arizona Commerce Authority valued at $590,519 for the hiring and training of more than 300 new employees. In August 2020, COMSovereign Holding Corp. Chairman and CEO Dan Hodges said, “We look forward to commencing full-scale operations in Tucson and drawing upon the deep talent in the local community that will play an important part in helping COMSovereign bring technology leadership in telecommunications back to the United States.”

This Tucson-born micro-satellite launch firm announced in November 2020 that after a competitive multi-state process, it will restart operations and remain in Tucson. Vector had declared bankruptcy in 2019, laying off 150 workers.

“We actually came to Tucson to close up shop, so to speak, and move the assets out of Southern Arizona,” said Rob Spalding, acting CEO of Vector Launch. “However, we were introduced to Sun Corridor Inc. who convinced us that Tucson has the right workforce and talent in order for us to stay. We are committed to manufacturing jobs in the U.S., and it’s clear we have a strong path forward in Tucson.”

After testing trucks in Arizona for over a year and beginning to generate revenue for hauling freight in the state, this global self-driving truck solutions company announced plans to create up to 500 new jobs in fields ranging from engineering and autonomous truck driving to office management. The expansion had a projected total economic impact of $1.1 billion over the next five years.

In January 2021, it was reported that TuSimple would add more than 100 new jobs to its current head count of 200 and expand its testing center and trucking hub by 35,000 sq. ft. The company, which has welcomed UPS as an investor and also conducted a pilot program with the U.S. Postal Service, anticipates limited testing of fully driverless vehicles on its hub-to-hub network across much of the southern U.S. sometime in 2021.

This general contractor and provider of quality welding and fabrication services for the commercial, utility, government, heavy industrial and mining sectors broke ground in January 2021 to prepare for its headquarters expansion in Marana, as the firm plans to grow its head count of 410 to nearly 580 over the next five years. Phase one of the $17 million project is scheduled to be complete by October 2021. 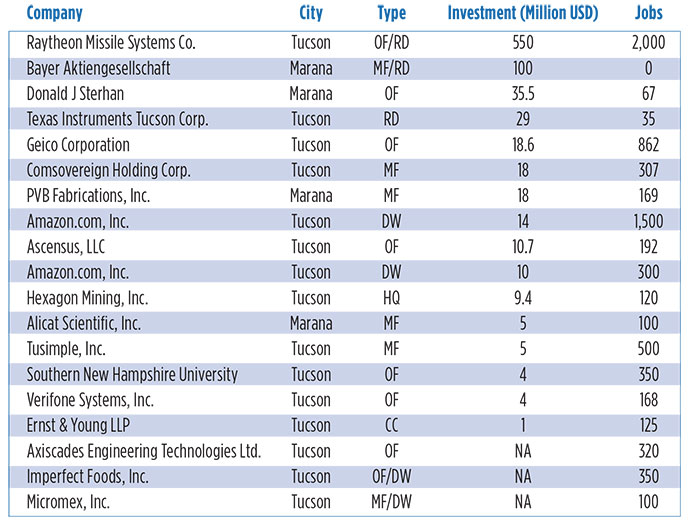