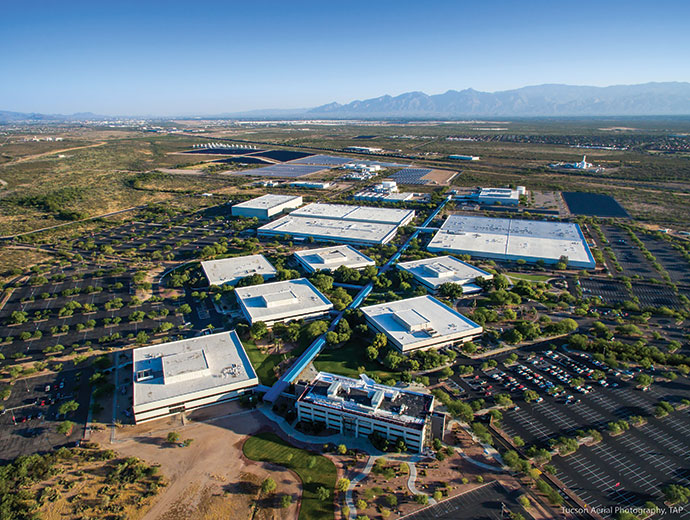 Tech Parks Arizona encompasses a range of University of Arizona-affiliated institutions that include the main park (pictured), the University of Arizona Center for Innovation in Oro Valley (where a new incubator just opened) and the new UA Tech Park at The Bridges closer to the main UofA campus, where the first building, The Refinery, is now rising.
Photo courtesy of Tech Parks Arizona
by ADAM BRUNS

In June 2017, Dr. Robert C. Robbins, former president and CEO of the Texas Medical Center in Houston, officially arrived at another powerhouse campus, when he became the 22nd president of the University of Arizona.

The former Stanford University School of Medicine professor and department chair today serves on the boards of such organizations as the Arizona Commerce Authority, Southern Arizona Leadership Council, Tucson Metro Chamber of Commerce, Greater Phoenix Economic Council and as a member of the Chairman’s Circle of Sun Corridor, Inc., the regional economic development agency for southern Arizona. I talked with him in January 2021.

Dr. Robert C. Robbins: I didn’t understand how special this place was until I got here. It’s a juggernaut in terms of science. Eds and Meds is my sweet spot. I think they’re two of the most important things in society and to economic development: The power of a land grant public research institution and, obviously, medicine.

Tucson is Tucson, but it’s in the context of the megalopolis of Phoenix and Tucson together. In my mind, it’s a continuum. It’s only a little over 100 miles. As Phoenix develops southward and Tucson northward, 100 years from now there will be high-speed rail [and other connections]. The University of Arizona has incredible power in the science that’s done here. We’re the only university in the country that has two medical schools — a legitimate separate school in Phoenix for 10 years now, and one that’s been here for over 50 years. It’s an opportunity to have two different fronts in order to develop our research portfolio.

That portfolio has a lot of astronomy, planetary science, aerospace and optical science — I think optical science is one of the best commercializing options we have. We are leading a consortium that also includes MIT, Harvard and Yale. It’s rarefied air for UofA to be in. But quantum networking is going to change the world, and we are right in the middle of that.

We have expertise in water. The Biosphere is here. And Raytheon is here. You start to see the components of having fundamental discoveries that can be translated into viable products that make the world a better place.

How do you envision the role of the university in economic development at a local, state, regional and, in your case, bi-national level?

Robbins: I had the incredible blessing of being at Stanford for almost 25 years and learning in that ecosystem about how you do startup companies. I’ve been involved, after Houston, in more than 100. I can be a good ambassador and draw on that experience to help understand why Tucson and why now. The university is a big, big part of that. I like to be really involved, because number one, I learn a lot and am interested in the science. But I can also help guide people to have realistic expectations of what could work or not work.

Walk me through a few examples of projects you’ve been personally involved in.

Robbins: When I got here, Fletcher McCusker [a 1974 UofA alumnus who grew Providence Service Corp. to $55 million in revenue and is CEO and founder of UAVenture Capital] was one of the first guys I met. He was about to retire, a UofA guy who sold his company and never needed to work again. He wants to help Tucson grow. And economic development is in his DNA. I said, “I need working capital, I need a fund.” I have all kinds of connections in Boston and the Bay Area, but those are guys that don’t want to be here. I spent years trying to get buddies to open an office in Houston and couldn’t. Fletcher took it on himself. I helped him raise money for his fund and by being being an advisor of companies in his portfolio. 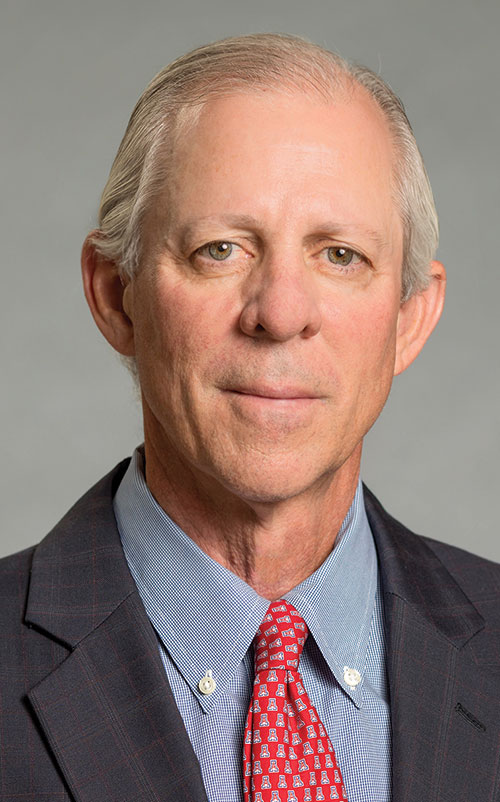 He took his own company, SinfoníaRx, from an idea to a company he sold, and it came right out of our college of pharmacy. It’s a software algorithm play on drug reconciliation for safety. It was a good exit, and he sold it to a Philadelphia firm and convinced them to keep it here. Ventana Medical Systems was another great story that came from one of our pathologists, and has to do with automating cancer pathology work. We’re working with their founder on establishing a skin cancer institute here in Arizona.

I’ve been involved with Raytheon, and certainly have developed relationships with Caterpillar. We’re about to establish a school of mining, so I deal with Caterpillar and the mining companies around automation and Fourth Industrial Revolution types of things.

Robbins: It’s a continuum. We have several community colleges that we partner with. Pima Community College is here in Tucson, and Maricopa is one of the bigger ones, with 10 campuses. We have an applied sciences college in Sierra Vista that’s more than a community college, but it’s a two-plus-two type program.

Companies expect we’re going to train engineers. We feel strongly what they want to see from us is helping our graduates develop crucial thinking, leadership and communication skills, all developed in the humanities. I see it as a bimodal approach. I lean on the applied side. The most important thing is to be good members of society, but the number one thing they need is to get a job. There is a tension between the scholarly elite who teach theory and those who teach applied practical skills — how to be culturally, financially and health competent. I get pushback from people saying we’re not a community college or a trade school. We have purposefully worked with the development of this applied science college in Sierra Vista and with our community college partners, because we need a well-educated workforce.

Universities have varying degrees of control on IP and commercialization. Describe where the university falls on that spectrum.

Robbins: Doug Hockstad runs our tech transfer. He has the vision I have. At Stanford, they would beat you until you cried uncle in terms of putting restrictions on you. You were allowed to consult one day a week, and if you developed it outside the university, which I did, it was free and clear, because I did it on my one day a week. But I did start a stem cell company out of my lab, and that was very painful. Here we’re a little more liberal. I don’t think the inventor gets rewarded enough, but it’s pretty generous. We only established our tech transfer office six years ago, which is crazy. I keep saying, “You don’t have to be in the Bay Area or Boston to have a startup.” I have a very inventor-centric approach to it.

What are the most under-valued aspects of Tucson and southern Arizona in terms of everyday life and work?

Robbins: It’s affordable. The people are unbelievably great. It’s a great community to engage with. The weather is fantastic. There’s the natural beauty of the Sonoran desert, with hiking trails and beautiful mountains. It’s one of the greatest cycling areas in the country, with 100 miles of road bike trails. A neighbor of mine is a pro cyclist who lives in Denver, but comes down here when it gets too cold. We have four of the world’s top telescopes. There are a million people here, and you can scoot up to Phoenix — the fifth largest U.S. city now, and growing — in less than two hours. Tucson has a real soul to it, and a lot of that has to do with the University of Arizona. It’s the largest small college town you’ll ever be in.