Where the Stars Align 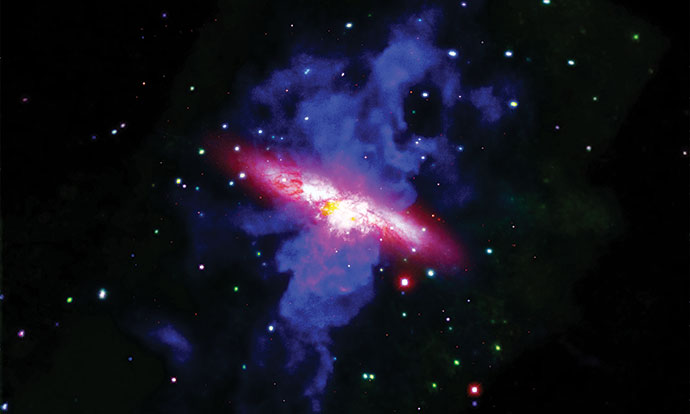 Photo courtesy of NASA/CXC and NASA/STScI
by ADAM BRUNS

One hundred eleven: That’s how many miles separate Tucson, Arizona, from its big sister city Phoenix.

Seventy: That’s the number of miles between Tucson and the Mexican border crossing at the Port of Nogales where some 2,000 trucks a day cross in peak produce season.

Around 11.42 million light-years. That’s how far it is to the starburst galaxy Messier 82 (pictured), which postdoctoral researcher Carlos Vargas of the University of Arizona’s Steward Observatory will study thanks to a $20 million NASA grant awarded in January 2021 to a project led by him as part of its Astrophysics Pioneers program.

The mileages don’t change, but the distances seem to get smaller every year, thanks to the growing human, business and infrastructure connections linking Tucson’s more than 1 million people to global commerce — and to the extraterrestrial cosmos.

The Arizona Commerce Authority’s profile of greater Tucson highlights its strengths in medical industries, optics and astronomy — led by the University of Arizona, a top 20 national research institution responsible for bringing $11.1 billion into the state.

Tucson was named by Moody’s Analytics one of the top 10 American cities best positioned to recover from COVID-19. Move.org found it has the fourth-lowest cost of living among the nation’s most populous 75 cities — remarkable for a city with Tucson’s quality of life. Livability and Fourth Economy put Tucson in their Top 10 Remote-Ready Cities in the U.S. Barbra Coffee, economic initiatives director within the City Manager’s Office Of Economic Initiatives, points out a program capitalizing on that status: Remote Tucson, whereby selected remote workers receive cash, exclusive benefits, moving assistance valued at over $7,500 and connections with community ambassadors.

The program is one of many found on the organization’s new Connect Tucson website at connecttucson.com, where one of the first thing you learn is that 47% of the area’s professional workforce has a science- or engineering-related degree. Tech Parks Arizona’s original Tech Park alone is home to 7,000 knowledge workers at more than 65 companies.

“Everyone is organized around how to support and innovate,” Coffee says, noting the leadership roles played by UA Venture Capital and Desert Angels, two key local venture capital organizations. That support includes soft landings for foreign companies. Tucson is in a trade corridor that reaches 68 million customers in the U.S. and Mexico.

A conversation with Coffee keeps turning up remarkable little facts. The area has the second largest optics/photonics cluster in the nation. The UofA is building mirrors for the world’s largest telescope under its football stadium. Davis-Monthan Air Force Base injects more than $1.5 billion dollars into the economy annually. Billion-dollar unicorn TuSimple, an autonomous trucking company, continues to grow, as does Raytheon, which already employs more than 13,000 in the region. With the leadership of industry titans, the area continues to make its mark in pioneering mining technology — Caterpillar’s new $50 million regional HQ for its mining division will house as many as 600 jobs. “Tucson in recent years has really become a hub for mining innovation,” says Justin Dutram, assistant vice president for Mexico Initiatives at UA Global, including solid relationships between UofA and Mexico’s largest mining companies.

Meanwhile, the city of Tucson, with 4,000 years of history behind it, is moving into the future with a rejuvenated downtown and a UNESCO designation (the first in the U.S.) as a City of Gastronomy.

Carol Stewart, associate vice president of Tech Parks Arizona and president of the University of Arizona Center for Innovation (UACI), knows what vibrant centers of innovation look like, having come from the superlative atmosphere around the University of Waterloo in Ontario, and having led the Association of University Research Parks (based in Tucson) as CEO. Her organization has supported a plethora of startups, such as proAutomation in Mexico (a beneficiary of UACI’s incubation program and the international soft-landings program Global Advantage) and life sciences startups Reglagene and Emagine Solutions Technology. Stewart says UofA President Robert Robbins has a clear vision of aligning the school and the area with the Fourth Industrial Revolution. She could be talking about his national leadership role in navigating the pandemic or the field of smart technologies and automation when she says, “It is a time of transition, and we’re going to lead that.”

A relative newcomer herself, Stewart lauds the welcoming atmosphere of the city. “The warmth of the Tucson business community is overwhelming,” she says. “When a newcomer comes in, everybody wants you to succeed. It’s a very connected community, in the corporate sense and the social sense. I also love the diversity, which is a real calling card for the area and part of the DNA of the university.”

The area’s culture and beauty are part of the draw. “You have to land in a place that people want to move to,” she says. Tucson, she says, “is just a treasure.”

In terms of distance, Tucson and southern Arizona business and community leaders may think they have a ways to go to reach their high economic development aspirations. But it would come as no surprise at all if they look around and say, “We’re already there.”