How Arizona is attracting high-tech manufacturing companies, from electric vehicles to semiconductors and everything in between. 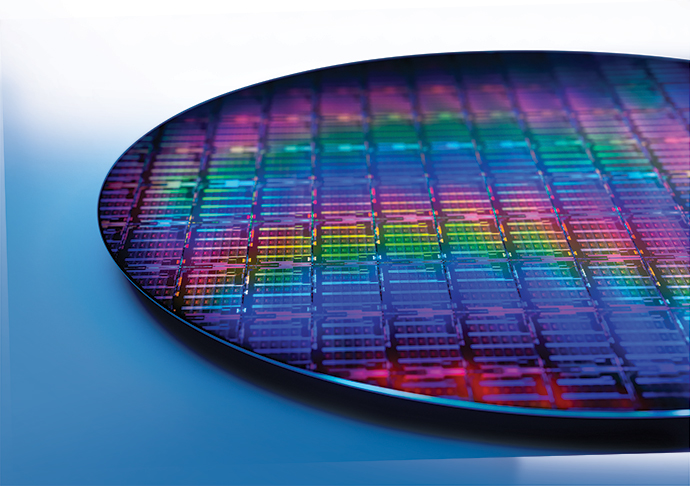 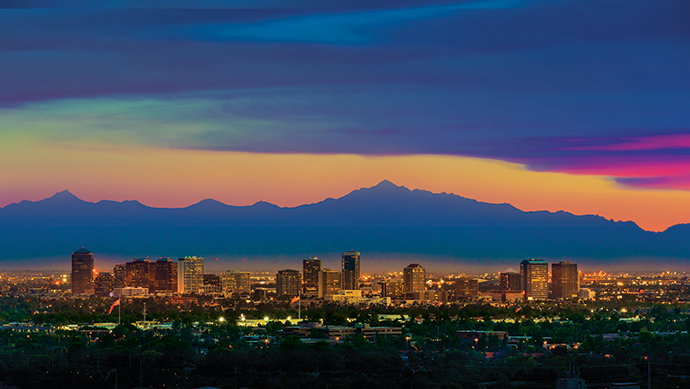 As technology firms look for locations in the U.S. to innovate and build their high-tech components, a large number of companies have recently chosen to establish their base of operations in Arizona — chiefly, in the Greater Phoenix metro area. These investments come from a range of high-tech industries, including logistics and high-tech manufacturers making everything from electric vehicles to semiconductors.

Greater Phoenix has long been known as a hub for advanced manufacturing, with tech companies like Intel, Honeywell and Boeing operating facilities in the region. Its innovative, business-friendly climate, coupled with its sizable talent pool, has led to a year of significant investments and the creation of thousands of new jobs. 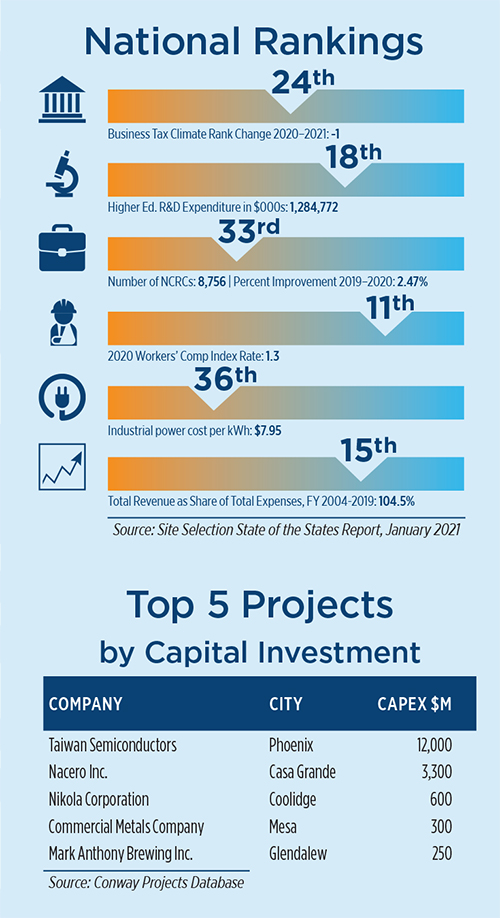 One of the region’s most recent wins came from electric vehicle manufacturer, ElectraMeccanica, which selected the city of Mesa for its U.S.-based assembly plant. The company’s yearlong search took it to five different states for its new site. Ultimately, the company’s decision to locate in Mesa hinged on finding the right environment for its technical and workforce needs. When operational, the facility is expected to create up to 500 new jobs and produce 20,000 electric vehicles, called SOLO EV, per year. Altogether, the site will feature a light vehicle assembly plant and a state-of-the-art engineering technical center, including multiple labs and vehicle chassis, battery pack and power electronics testing workshops.

“I want to thank Governor Ducey, his team, the state of Arizona and everyone who’s been involved in this process for helping to bring ElectraMeccanica’s U.S. operations to life,” said CEO Paul Rivera. “This decision is monumental for our business and will be transformative for our host city and state. When fully operational, we anticipate creating hundreds of new jobs for the local economy. We believe Mesa’s population size and density provides a great talent pool as we look forward to contributing to the growing high-tech environment.”

Maricopa County’s talent pool is indeed a deep one. Home to approximately 4.4 million people, Maricopa County is the nation’s fourth-largest county for population. More than half of the state’s population resides in Maricopa County, including Phoenix, Mesa, Chandler and others. 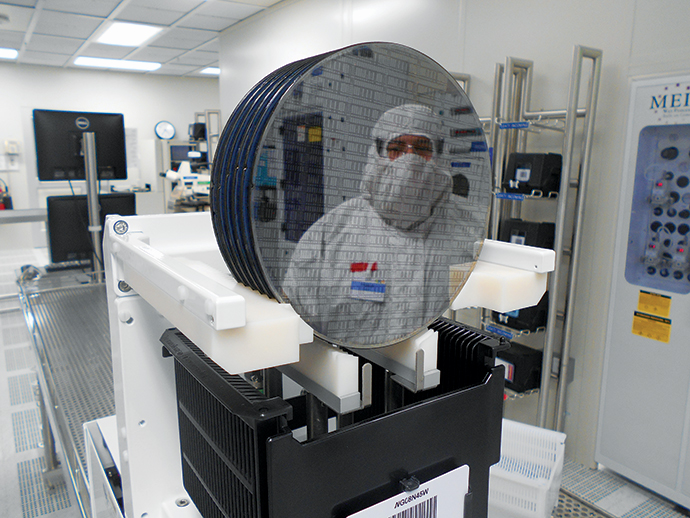 NXP’s GaN fab in Chandler will support 5G base stations and advanced communication infrastructure in the industrial, aerospace and defense sectors.
Photo courtesy of NXP

Emsi ranked Maricopa County the No. 1 large county in its annual 2020 Talent Attraction Scorecard. The report points to the region’s broad appeal for industries and recent activity in the semiconductor sector as a contributing factor. “Perhaps what is most striking about Maricopa’s economy is the breadth and depth of industries,” the report notes. Citing major investments in the advanced manufacturing and semiconductor industries, the scorecard says expansions like Intel’s Fab 42 plant contribute to Maricopa County’s status as a national leader in advanced manufacturing and semiconductor production, contributing to the county’s 18% growth in skilled jobs. The report nods to a positive feedback loop in the region — in which the presence of skilled talent attracts investments, which in turn attracts more talent and investments.

The region’s workforce is bolstered by the talent coming out of Arizona State University’s (ASU) Fulton Schools of Engineering, one of the top-ranked engineering and technology programs in the country, as well as Northern Arizona University and the University of Arizona (both of which have a full range of engineering and industrial programs.) Additionally, ASU has earned the No.1 most innovative school designation from U.S. News & World Report for five consecutive years.

Arizona is the Place for Fabs

The last year has unveiled several new semiconductor projects in Arizona, including Intel’s massive $7 billion investment in Chandler, which was completed in October.

Intel’s Fab 42 was one of the largest construction projects in the U.S. — a $7 billion investment that created 3,000 new Intel jobs and 10,000 new Arizona jobs overall. Shortly after the company officially opened its new fab, it announced its $20 billion plan to expand its Ocotillo campus in Chandler significantly. The company said it would immediately start planning and construction on two new fabs. Intel will have six factories on the 700-acre campus with the two new facilities, making the location its largest manufacturing site in the world. The Intel Ocotillo campus is the company’s first mega-factory network, with four factories connected via a mile-long automated superhighway.

“Intel is proud to expand our U.S. manufacturing presence with two new factories in Arizona,” said Keyvan Esfarjani, Intel senior vice president in Manufacturing & Operations. “For more than 40 years, Arizona has been vital to Intel’s ability to create the world-changing technology we all depend on. This new investment will advance the ecosystem of innovation we’ve helped create in Arizona and increase U.S. semiconductor manufacturing capacity.”

“For more than 40 years, Arizona has been vital to Intel’s ability to create the world-changing technology we all depend on. This new investment will advance the ecosystem of innovation we’ve helped create in Arizona and increase U.S. semiconductor manufacturing capacity.”
— Keyvan Esfarjani, Intel Senior Vice President, Manufacturing & Operations

Intel is just one of many new fabs coming online in Greater Phoenix. NXP also officially opened its 150-mm. (6-inch) RF Gallium Nitride (GaN) fab in Chandler in September 2020. The new fab will support 5G base stations and advanced communication infrastructure in the industrial, aerospace and defense sectors. GaN power transistors have emerged as the new gold standard in 5G size and power requirements. The fab is set to ramp up quickly, with NXP leveraging its Chandler-based team and their longstanding expertise in compound semiconductor manufacturing. Additionally, Taiwan Semiconductor Manufacturing Company’s (TSMC) $12 billion investment in a new 5-nm. foundry in Phoenix is expected to create over 1,600 high-tech professional jobs directly and thousands of indirect jobs in the semiconductor ecosystem when it’s operational in 2024. 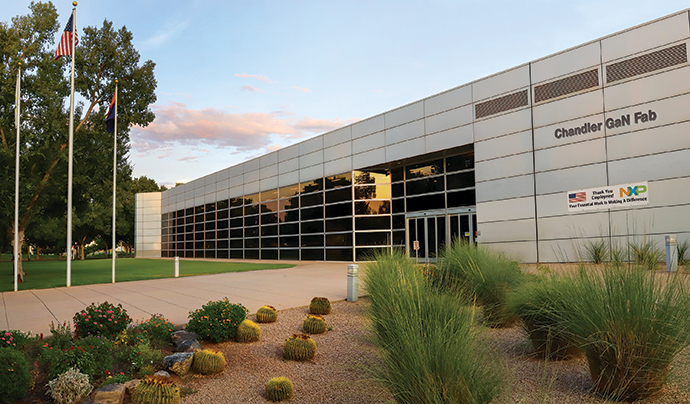 Samsung is also reportedly looking to Arizona as a potential site for its new $17 billion, 1,800-job semiconductor fab. The company has filed documents with Arizona, New York and Texas and is expected to decide in 2023.

As reported by Adam Bruns in the November issue of Site Selection, momentum is building for industry incentives to bring more fabs to the U.S. The Semiconductor Industry Association (SIA), in partnership with the Boston Consulting Group (BCG), recently released a study analyzing the impact of proposed federal incentives for domestic semiconductor manufacturing. The report noted how 70 years ago, the U.S. made the entirety of the world’s semiconductors. But today, the U.S. share of the sector’s global fabrication hovers at only 12%, meaning 88% percent of the semiconductor chips used in America’s computers, phones, vehicles and appliances are made outside the country. 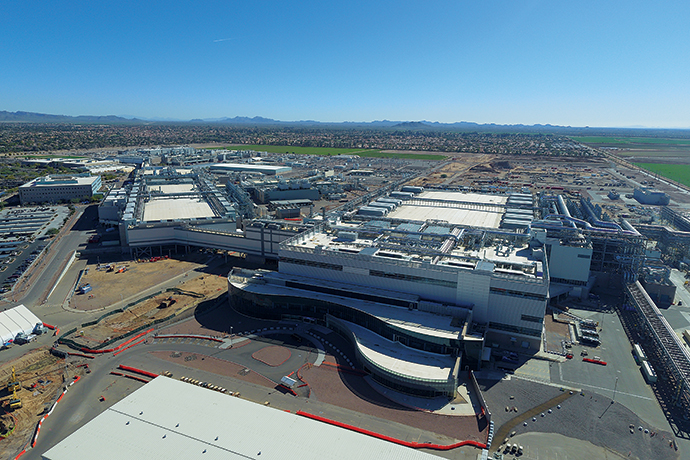 “The country that leads in advanced chip research, design, and manufacturing will have a big leg up in the global race to deploy new game-changing technologies, such as 5G, artificial intelligence and quantum computing,” said John Neuffer, SIA president and CEO. “Leaders in Washington should seize this opportunity, level the global playing field to attract chip production, and invest boldly in domestic manufacturing incentives and research initiatives that will strengthen U.S. tech leadership for decades to come.”

According to the SIA report, federal incentives would reverse the country’s declining chip production trajectory and create as many as 19 major semiconductor manufacturing facilities (fabs) and 70,000 high-paying jobs in the U.S. over the next 10 years. The report notes some of the countries leading in the sector (including Taiwan, South Korea, Singapore and China) invest tens of billions of dollars annually into the industry.

The SIA report notes, “The global semiconductor industry is expected to increase manufacturing capacity by 56% in the next decade. With a $50 billion federal investment, the U.S. is projected to capture nearly a quarter of new global capacity that is not yet in development, compared to only 6% with no government action.”


Amazon Doubles Down in Phoenix

Kidder Mathews released a Phoenix Industrial CRE Market Update for the first quarter of 2021 and noted how the COVID-19 pandemic has accelerated trends in e-commerce, fueling demand for warehouse and distribution space in the Phoenix market. Construction pipelines are still booming in the region after a record-breaking new 18 million sq. ft. was added in 2020. Currently, over 16 million sq. ft. of space is being built in the area, with much of it in the Southwest Valley region of the city.

Amazon has aggressively expanded in the Phoenix region over the last year, with facilities ranging in size from smaller last-minute fulfillment centers to large-scale distribution facilities. In August, Amazon announced it would open 11 new sites across the Phoenix metro area. These new facilities are expected to create more than 3,000 new full- and part-time jobs paying at least $15 an hour with benefits.

“This is big news, not only for the Phoenix area but for the entire state of Arizona,” said Governor Doug Ducey. “Amazon employs thousands of people in our state, and the company’s decision to expand their operations here will create thousands more job opportunities for our citizens. We are grateful for Amazon’s continued investment in Arizona.”

“We now have more than 17,500 full- and part-time Amazon employees who call Arizona home.”
Fulfillment

The new sites include seven delivery stations and two additional facilities that support fulfillment operations in Avondale, Chandler, Goodyear, Mesa, Phoenix and Tempe. Delivery stations power the last mile of Amazon’s order fulfillment process. These sites will create hundreds of permanent full-time and part-time jobs, in addition to offering entrepreneurs the opportunity to build their own small business delivering Amazon packages and independent contractors the flexibility to be their own boss and create their schedule delivering for Amazon Flex.

In 2021, Amazon will launch additional sites to support customer fulfillment and operations, including a cross-dock facility in Goodyear and a delivery station in Surprise, creating more than 1,000 full-time jobs in the West Valley.

“We’re proud to be growing in the Phoenix metro area, where we opened our first fulfillment center in the state more than 13 years ago with just 300 full-time employees. We now have more than 17,500 full- and part-time Amazon employees who call Arizona home,” said Matthew High, regional director, Amazon Fulfillment. “We greatly appreciate the strong, longstanding support we’ve received from local and state leaders as we continue to grow. We’re excited to create 3,000 new full- and part-time jobs across the Valley, with industry-leading pay and comprehensive benefits starting on day one.”

This news comes on the heels of Amazon’s announcement that it would invest $1.4 billion to expand its Tech Hubs in Phoenix, Dallas, Detroit, Denver, New York and San Diego. Amazon’s 90,000-sq.-ft. Phoenix Tech Hub expansion will bring more than 500 new jobs to the community. Amazon has invested more than $11 billion in Arizona since 2010 and directly employs more than 17,000 people across the state.