Unique indices highlight the top countries and metro areas in terms of their outlook for corporate investment.

Is a global economy wrung out from a historic pandemic ready to be refreshed and rejuvenated?

Site Selection’s refreshed Global Best to Invest rankings offer some guideposts for the way back.

Next come the Global Best to Invest Top Metro Areas, also presented in separate cumulative and per-capita rankings, with their respective regional and local economic development organizations. In this case, we’ve broken out China as a sixth world region unto itself. Why? Because there are simply so many vibrant metro economies to keep track of. After all, the country is now home to a third of the world’s billionaires — more than 1,000 in total, which is more than the totals of the next three countries (U.S., India and Germany) put together. Another reason? Seven of the 10 busiest airports in the world are now in China, led by No. 1 Guangzhou Bai Yun International Airport in southeast China, named the busiest passenger airport in the world in 2020 by Airports Council International (ACI), moving ATL out of the top ranking for the first time since 1998. 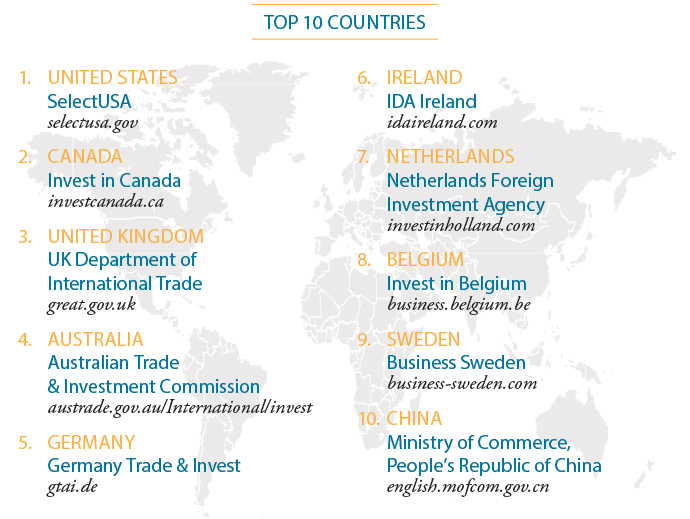 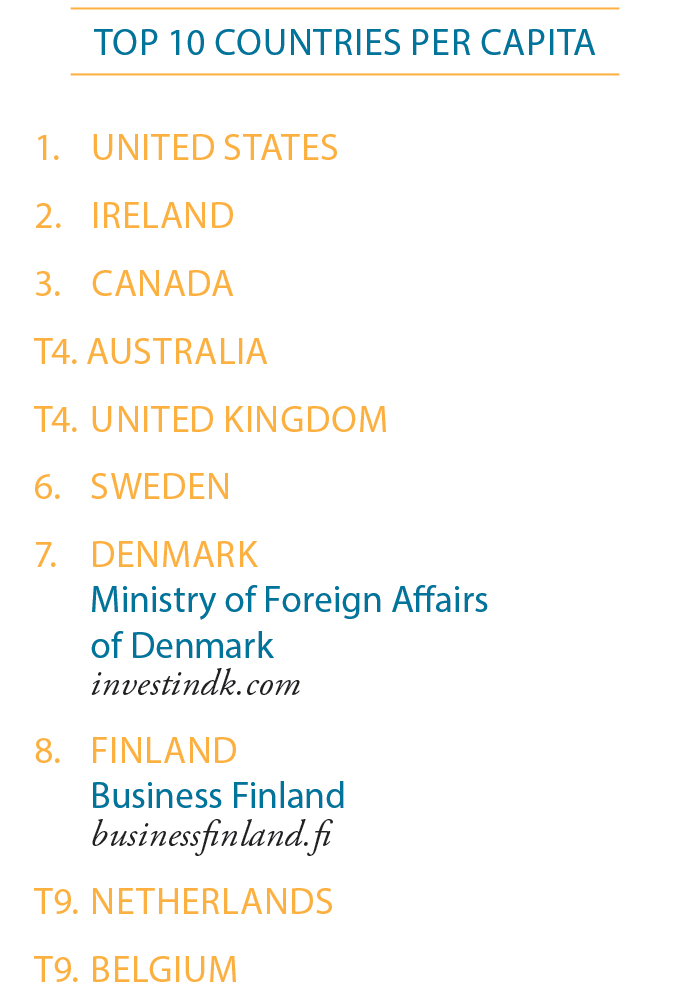 The number of large and medium cities in China still catches some by surprise: More than 160 have 1 million people or more. So it’s no wonder that Milken Institute, the creator of the respected Best-Performing Cities Index for the U.S., developed a Best-Performing Cities China Index several years ago. It’s one part of our ranking methodology for metros, which also includes Conway Data Projects Database data 2016-2020, Startup Genome’s Global Startup Ecosystem report and Kearney’s Global Cities report. Unlike the country-level rankings, the U.S. and Canada were excluded since they have their own metro-area rankings on our editorial calendar, and Mexican metros were placed within the Latin America & Caribbean region group.

NOTE: In some cases the designated agency for a given metro area (e.g. Santiago in Chile and Warsaw in Poland) is the national government agency.

Indicators on the Road to Recovery

A comeback is on everyone’s mind. And it’s needed, even in leading countries. U.S. Bureau of Economic Analysis data released this spring show international companies invested $177 billion into the United States in 2020. It sounds like plenty — and it’s 20% of the entire world’s total FDI flow of $859 billion last year — but it’s the lowest level in over 10 years, part of a 42% global drop in FDI. A separate report from UNCTAD pegs FDI flows to the U.S. last year at only $134 million, while China welcomed $163 billion and India’s total rose by 13% (the highest percentage uptick in the world) to $57 billion. Also bucking the global trend, slight upticks in FDI occurred in Israel, Japan and the Philippines.

According to the Global Business Alliance, an organization that advocates for an open economy that welcomes international companies to invest in America, international firms employ 7.8 million U.S. workers, 22% of the American manufacturing workforce and account for 80% of all new U.S. manufacturing jobs over the past five years.

What about the rest of the world? The fourth annual Organizational Resilience Index report from the British Standards Institution surveyed 500 senior leaders around the globe and found 57% of businesses in the UK, U.S. and India expect financial performance to improve this year, with the strongest confidence in a comeback among executives in the built environment space, followed by health care, food and automotive.

The 2021 Global Opportunity Index from Milken Institute, based on 14 indicators, focuses on the status and promise of Latin American nations among the world’s emerging and developing economies, finding the most promise in Chile, Uruguay, Costa Rica, Mexico and Panama, in that order.

A key data partner in this year’s Global Best to Invest rankings is global consultancy Kearney, whose Global Business Policy Council in March conducted a webinar about the release of the 2021 Kearney FDI Confidence Index. “The very nature of FDI and its role in corporate global value chains may well be undergoing the most dramatic strategic rethink since the global expansionary period at the turn of the century when this Index was first created,” said Kearney, whose Global Business Policy Council Founder Paul Laudicina founded the Index in 1998.

Derived from interviews with top CEOs and CFOs around the world about their FDI intentions over the next three years, the top countries in Kearney’s newest ranking align neatly with our own, with the U.S., Canada, Germany and the UK (up from No. 6) taking the top four spots in that order. Spain popped up two spots to No. 9, the Netherlands rose three spots to No. 11 and the UAE climbed four spots to No. 15.

“FDI flows have not been spared the shock waves of the pandemic, and the trend has continued of flight to safety,” said Laudicina. But other signals were afoot already, driven by technology, geopolitics, trade frictions, national procurement policies and the diminished significance of labor arbitrage as factories become more automatized and customization grows. This has compelled production to move closer to the end user, the consumer, Laudicina said. “All of this has been leading to an increasing fragmentation of global supply chains,” he said. “Frankly, not since the late 1990s have we seen such a global strategic recalibration by business.”

Surprisingly, India is nowhere to be found in the top 25. Even taking the shrinking FDI pie and the flight to safety into account, “I found it striking that a number of very significant developing economies weren’t included on the index,” said Erik Peterson, partner and managing director of the Global Business Policy Council. However, the Index is a snapshot, he pointed out, “and my guess is we’ll see the balance shift again in the future.” He also pointed out that of the top 25 economies, five showed increased optimism for 2021: UAE, Norway, Austria, Portugal and Denmark — several of which show well in the Global Best to Invest rankings.

The Kearney report also zoomed in on the issue of data nationalism, with many respondents concerned about the high costs associated with an increase in data regulations and data privacy rules imposed by national governments. Compliance costs total up to $1 million for 46% of respondents, and between $1 million and $10 million for 40% of them. 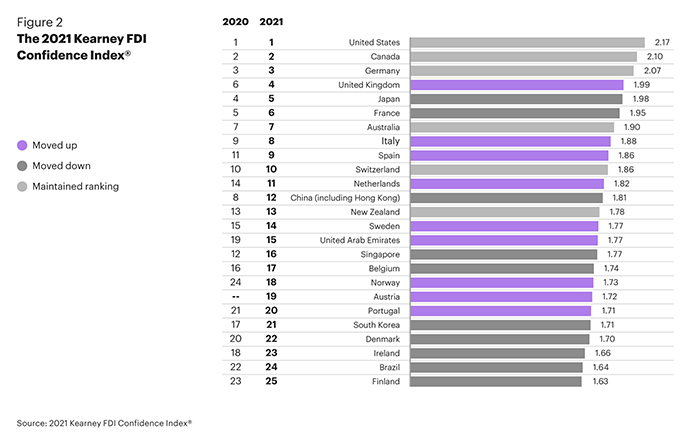 Ettore Pastore, the global and EMEA Leader for Kearney’s financial services practice, emphasized the flight to safety, but also the flight to discovery: “FDI occurs only when there is a very high content of innovation,” he said. “This of course is logically correlated to the developed markets. COVID has exacerbated these trends. In my opinion, consciously or not, investors are positioning themselves in the markets where massive government investments are coming. If you put together the effect of government and private investments, you can get very interesting results for the economy.”

But it will take some opening up, said Laudicina, even in an era of shutting down. “At the same time we close borders to protect ourselves,” he said, “the only way we can sustain ourselves is to cooperate across borders. FDI will continue to be an extraordinarily important mechanism for advancing economic prospects, and if the developing world is not to experience a lost decade, it’s going to take a degree of cooperation, not just in terms of policies governments take, but in resisting the temptation to come up with nationalist recommendations.” 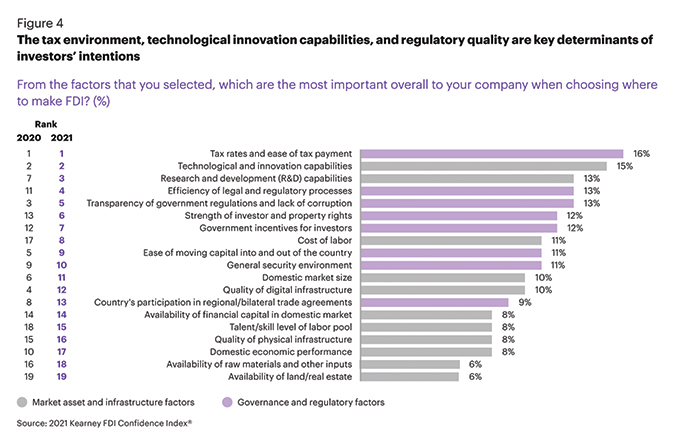 He cited recent statements and proactive policy actions from South Africa President Cyril Ramaphosa to the effect that “South Africa missed the first three industrial revolutions, and it can’t afford to miss the fourth one.”

With a reduced flow of FDI dollars, said Laudicina, the importance of collaboration among IPAs, industry and government to attract investment will grow. “Most countries want to sell what they have on the shelf, rather than take a sharp pencil and make a decision about what they should be selling to be competitive.” It will require an extraordinary amount of effort, he said, to ensure corporate objectives are met, while also ensuring national rejuvenation by both capital and innovation.

As the recalibration continues in these most interesting of times, look to these Global Best to Invest locations for emerging opportunities.