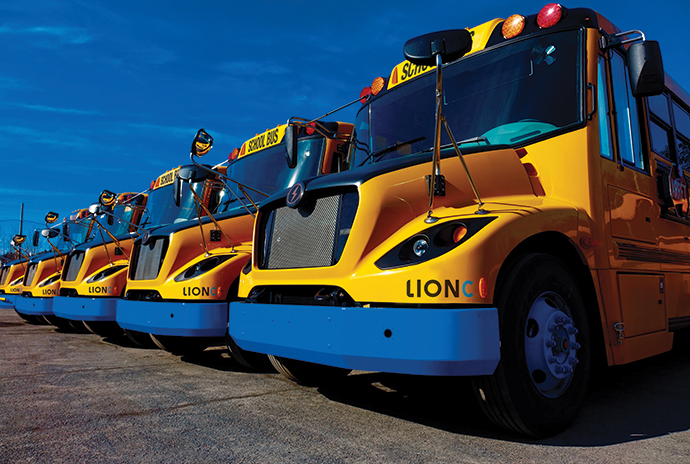 A new battery pack plant and innovation center in Saint‑Jérôme is pivotal to the growth plans of all-electric bus and truck company Lion Electric.
Photo courtesy of Lion Electric
by Adam Bruns

In mid-March, California-based Lion Electric, a maker of all-electric trucks and buses, announced it would construct a battery manufacturing plant and innovation center in Québec in Saint‑Jérôme. The Canadian and provincial governments pledged combined support of nearly C$100 million toward the $185 million plant. Two weeks later, electric off-road vehicle developer Taiga Motors pledged to invest part of $185 million in recently announced funding in a new mass-production assembly facility in Shawinigan, Québec, where it will accelerate production of electric snowmobiles and personal watercraft, as well as Taiga’s side-by-side vehicles. The new facility will supplement a ramp-up in production capacity at Taiga’s R&D site in Montréal.

The projects will rise against a backdrop of electrification strategies from various levels of government and powerful players such as Hydro-Québec.

Lion already has a vehicle assembly location in Saint‑Jérôme (part of the Montréal metro area) and another in Sacramento, California. Its new factory is planned to begin operations in early 2023 and will produce battery packs and modules made from lithium-ion cells. Construction is projected to break ground over the next few months “at a location to be confirmed in the near future,” the company said. Over the last decade, Lion has established itself as a leader in the all-electric school bus industry, having delivered over 300 all-electric school buses in North America with over 6 million miles driven since 2016. 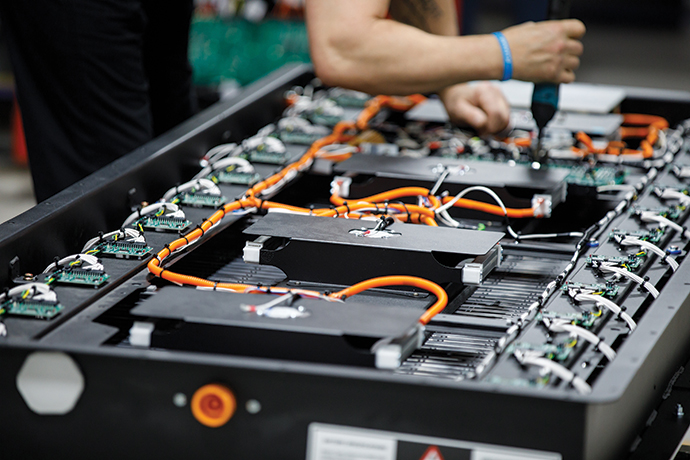 Lion Electric’s new battery manufacturing plant and innovation center at a still-to-be-named location in Quebec is projected to produce one battery module every 11 seconds and a full battery pack every five minutes.
Photo courtesy of Hydro-Québec

Among its customers is Amazon, for which it’s delivering hundreds of all-electric trucks by 2025. In February, Lion added to its roster of customers with an order for 10 all-electric school buses from the Los Angeles Unified School District (LAUSD). But its growth in Québec is just as pivotal.

“With the construction of the plant, Lion predicts to see a considerable reduction in the cost of its vehicle manufacturing while ensuring control and optimization of a key component of its vehicle supply chain,” the company said in its announcement. “With a planned yearly production capacity of 5 gigawatt-hours in battery storage, Lion will be able to electrify approximately 14,000 medium and heavy-duty vehicles annually.” The move will also make the company the first Canadian manufacturer of medium- and heavy-duty vehicles to equip itself with its own automated battery pack manufacturing capability.

In November, Lion entered into a business combination agreement and plan of reorganization pursuant to which a wholly-owned subsidiary of Lion will merge with Northern Genesis Acquisition Corp., a publicly traded special purpose acquisition company (SPAC) focused on a commitment to sustainability.

“Thanks to the financing provided by the federal and provincial governments, we will now be able to manufacture in Canada what we previously imported,” said Lion Electric CEO and Founder Marc Bédard. “Lion, Quebec and Canada will gain from this, both on the economic and environmental fronts, to the great benefit of generations to come.”

In a CNBC interview in January, Bédard said a factory would be opened in the U.S. in the next two years.

Later in March, Taiga Motors announced its intent to build its facility in Shawinigan, scheduled for completion in 2022. The facility is expected to increase Taiga’s production capacity to 80,000 units by 2025.

“This facility, a part of the $185 million in recently announced funding, will bolster Taiga into becoming a globally leading OEM for powersports vehicles,” said Samuel Bruneau, CEO of Taiga. “We have seen strong customer demand limited by product availability. This new facility shows Taiga’s continued commitment to be trailbreakers and offer electric vehicles capable of diving mass-market adoption without compromise.”

Taiga’s initial production acceleration is underway in Taiga’s current Montréal Research & Development facility, which is expected to ramp up production capacity to 2,000 vehicles per year by the end of 2021. The second phase of increasing Taiga’s production capacity includes the building of the Shawinigan facility, beginning at a 200,000 sq. ft. capacity and later increasing to 340,000 sq. ft. In a similar fashion to Lion’s business timeline, Taiga intends to begin construction in the second quarter of 2021, following its listing on the Toronto Stock Exchange in connection with its proposed merger with Canaccord Genuity Growth II Corp.

Taiga said the site was chosen because Québec is already a world-leading electric technology hub and the site secures positioning in a primary location for innovation in the EV space. “As a location for a mass-production facility, Shawinigan provides multiple advantages with strong logistical infrastructure and a talent pool for future growth,” the company stated. “As Shawinigan is an established technology hub, it will accelerate Taiga’s vision for a vertically integrated local supply chain.”

“It’s always a pleasure to receive advocates and entrepreneurs who wish to establish themselves in Shawinigan,” said Michel Angers, mayor of Shawinigan, “especially when it’s a start-up that has developed in our entrepreneurial ecosystem and is part of one of our four pillars of economic diversification — energy efficiency and green technologies.”

Shawinigan happens to be the home of the energy technologies lab of HydroQuébec. The utility is proactive in the electric mobility, battery and renewable energy space, including the December announcement of a new subsidiary, EVLO Energy Storage Inc., that will design, sell and operate energy storage systems.

“Energy storage will play a crucial role in the energy transition,” declared Hydro-Québec President and CEO Sophie Brochu. “We firmly believe that the know-how Québec has acquired with regard to batteries will help develop solar and wind power. Our products will also have useful applications in existing power grids, such as in managing consumption peaks.”

The utility will play a key role in the Québec government’s new Plan for a Green Economy, intended to lower the province’s greenhouse gas (GHG) emissions.

“Québec’s GHG emissions are already lower than those of other regions in North America, and the Plan for a Green Economy will help us make further improvements in this area,” said Brochu in November.

The utility even takes a stake in companies staking their futures on the energy transition. By the end of 2020, Hydro-Québec invested over C$25 million to pursue the growth of Dana TM4, a JV between Dana Incorporated and Hydro-Québec that designs and manufactures low- and high-voltage electric motors, generators, power electronics, and control systems suitable for the automotive, commercial, off-highway, marine, rail, motorsports, and RV markets.

The company’s growth includes a new plant in India, another in Ohio and an acquisition in the UK. As of last fall, the partnership had generated a number of economic benefits for Québec, including 100 new high-quality jobs in Boucherville, primarily in engineering and R&D for vehicle electrification, and the 2019 acquisition of Laval-based Nordresa, which plans to expand there in coming years.

“Electric mobility is an irreversible trend that is accelerating worldwide,” said Simon Racicot-Daignault, senior director of subsidiaries and commercial innovation at Hydro-Québec. “Our enhanced presence in this market through our various investments positions us advantageously for the future.” 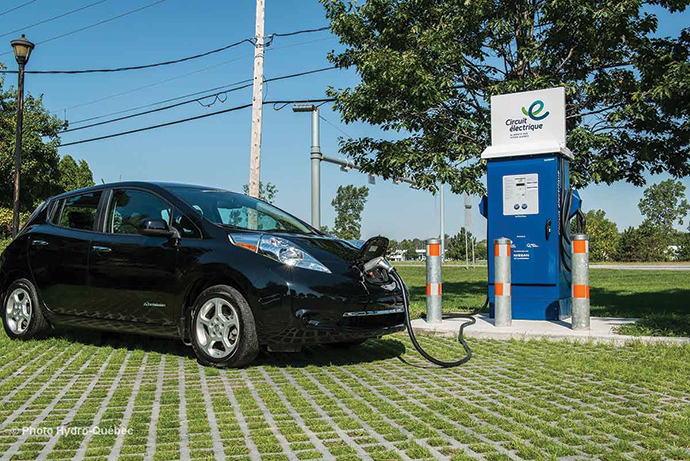 The Electric Circuit, the largest public charging network in Québec, consists of more than 2,900 public charging stations in every region of the province.
Photo courtesy of Hydro-Québec

HydroQuébec backs The Electric Circuit charging network, and its energy technologies lab is located in Shawinigan, the same community where Taiga Motors is investing in a new mass-production assembly facility for electric recreational vehicles. The utility’s research institute in Varennes includes the Center of Excellence in Transportation Electrification and Energy Storage.