A Pulitzer Prize winner documents a rare instance where the federal Opportunity Zone program has worked as intended. 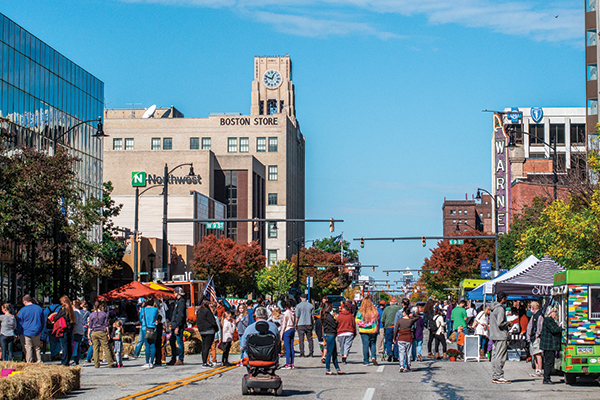 This fall saw the publication of “Only the Rich Can Play: How Washington Works in the New Gilded Age,” by longtime Wall Street Journal correspondent David Wessel, a senior fellow and director of the Hutchins Center on Fiscal and Monetary Policy at the Brookings Institution. His reportage chronicles the federal Opportunity Zone program: its roots eight years ago at a wine-soaked dinner in a high-end Washington restaurant; its relentless promotion by organizations such as the Economic Innovation Group (EIG) founded by Napster founder and former Facebook president Sean Parker; its current status as a well-intentioned tax break program gone a bit off the rails.

In an account otherwise dominated by lavish conferences and story after story of OZ projects and funds landing in places well off the intended mark, some projects show how good intentions can actually find their intended targets in a few of the nation’s 8,764 Opportunity Zones. By arrangement with Wessel and Hachette Book Group’s PublicAffairs imprint, Site Selection here presents an adapted excerpt from one of the book’s more optimistic chapters — “Doing Good.”  — Adam Bruns, Managing Editor

Erie, in the far northwest corner of Pennsylvania, holds a few unwanted titles. It is home to the poorest zip code (16501) in the entire United States — the median income in 2019 was just $10,874. It has been declared “the worst city for Black Americans” based on racial economic disparities — and 16% of its residents are African American. The city’s population is around 95,000, about 30% below its 1960 peak. Nearly 30% of the remaining residents live below the poverty line. A 2016 comprehensive plan found 4,700 vacant housing units; half of the city’s residential properties were on blocks where at least one nearby property was “visibly distressed.” Acres of commercial and industrial sites were empty.

Erie is an archetypal Rust Belt community struggling to recover from the decline of American manufacturing — with one big advantage: For the past five years, downtown Erie has been the focus of a business-led economic revival initiative spurred by the city’s largest employer, Erie Insurance. The company has 3,000 employees in the downtown, and importantly, its CEO, an Erie native, made saving the city one of his priorities when he took over in 2016. In 2017, the insurance company and other local institutions raised about $3 million to create the Erie Downtown Development Corporation (EDDC) and an allied, for-profit $27 million fund that offers patient capital (long-term investing without expectation of a quick profit), first- and second-loss guarantees, and bridge financing for the EDDC to buy and renovate downtown buildings. All of this happened before Opportunity Zones arrived.

In 2017, as the Tax Cuts and Jobs Act was moving through Congress, John Persinger—who ran, unsuccessfully, for mayor as a Republican in 2016 — and his colleague Matthew Wachter were practicing tax law at a local law firm. Wachter was poking around the text of the bill, noticed the Opportunity Zone provisions, realized that the incentive might help fund Erie’s redevelopment, and ran into Persinger’s office saying, “Read this. This is for us.”

After checking with his brother, also a lawyer, Wachter called the newly elected mayor — a former banker — and their state legislators, explained the provision, and pitched Erie’s downtown for designation. They claim to be the first locality to contact the governor’s office about OZs. The beleaguered city ended up with eight of the state’s three hundred OZs.

‘The Litany of Horribles’

Their effort drew attention from organizations like Accelerator for America (a group started by LA mayor Eric Garcetti that offers technical assistance to other cities) and policy wonks interested in helping troubled cities, including EIG. The Accelerator crew invited Persinger to dinner at Sean Parker’s Los Angeles mansion in July 2018. After listening to what other cities were doing, Persinger came home convinced that Erie needed a polished prospectus to woo investors.

Later that year, the pair were invited to an EIG meeting in Washington where they met Jonathan Tower, a Harvard MBA and private-equity veteran who founded Arctaris Impact Investors in 2009 to direct investment to businesses and infrastructure in underserved communities. It would turn out to be a providential encounter, an example of the networking that an OZ designation has generated in some communities. As an Urban Institute team concluded in a somewhat skeptical “early assessment” of Opportunity Zones: “OZs are helping spur the evolution of a new community development ecosystem, engaging both project developers and investors who have limited historical engagement in community development work.”

The features that make Erie exactly the sort of place program champions describe when they talk about Opportunity Zones don’t necessarily make it an easy sell to out-of-town investors.

“One of the things I’ve enjoyed the most about this is watching how different people sell their projects,” Persinger says. “I was listening to a presentation by an Opportunity Zone fund in Colorado Springs. And I’m sure they didn’t mean it this way, but by the time they got done selling the project, any reasonable person would say, ‘Why the hell is this an Opportunity Zone?’ They were selling the Garden of Eden.”

Wachter, who joins my conversation with Persinger, chimes in: “We’ve taken the opposite approach. We realized very quickly we couldn’t hide from the challenges, so we have what we’ve called essentially the litany of horribles that we will list.” But then they quickly follow up with the pitch that goes something like this: Yes, the current appraisal value on this property is very low, but over the next 10 years, it’s going to go up because we’re investing $100 million in this neighborhood — and we’re going to “de-risk this for you” by subordinating our investment to yours.

Here for the Long Haul

The first dollop of OZ money came from Erie Insurance. The company is unusual: Although it’s a Fortune 500 company listed on the New York Stock Exchange, all the voting shares are still held by descendants of the man who founded it in 1925. It is a family with deep roots in Erie. The company’s chairman and former CEO, Thomas Hagen, who married into the family and is number 213 on the Forbes 400 list (estimated wealth: $3.4 billion, more than Sean Parker), says there was talk 30 years ago of moving the headquarters to Pittsburgh, but “fortunately there were some of us around who felt more strongly about Erie.”

With his vocal encouragement, the company began actively promoting and investing in downtown renewal well before OZs materialized. (Most other Rust Belt cities don’t have a resident billionaire to supercharge their OZs.) Erie Insurance’s interests are obvious: Its offices are actually in one of the city’s OZs and its ability to recruit and retain employees is linked to Erie’s success.

The insurer has committed $75 million of its nearly $900 million investment portfolio to OZ funds that will invest in Erie, including $25 million through Arctaris. In turn, Arctaris has pledged to put $50 million into Erie, a chunk of which is going to fund local building or business projects selected in a competition. Erie Insurance also has allocated $6.5 million to a new downtown food hall, where nine local women and minority vendors will have stalls; $1.2 million in Whitethorn Games, an Erie-based developer of “wholesome” video games; and an undisclosed investment in a new plastic-recycling plant.

Erie Insurance was a big winner in the Tax Cut and Jobs Act, thanks primarily to the cut in the federal corporate tax rate, its tax bill, as reported on its financial statements, fell by 30% in 2018. Some of the savings went to cover $2,000 bonuses to nearly all of its employees. The company still books more than $75 million in taxes a year. Its OZ investments will help keep that down.

Christina Marsh, the insurer’s economic development chief, sees the OZ tax incentive as a welcome addition to the economic development tool kit, but says the OZ program’s biggest impact wasn’t financial. Rather, OZs put a spotlight on some of the city’s poorest neighborhoods, galvanized energy around revitalizing them, and helped to persuade skeptical residents that the business-led downtown renewal campaign will work for them, too.

Persinger, though, says the import of OZ capital to the Erie project is that, by law, it is patient capital that has to wait 10 years before cashing out if it wants the full OZ tax break. And that’s the only way investing in downtown Erie makes any sense. The standard line among the real estate crowd is that OZ tax breaks won’t make a bad investment good but can make a good investment great. In Erie, Wachter says, “We’re making palatable investments good. But that’s okay, that’s enough.” 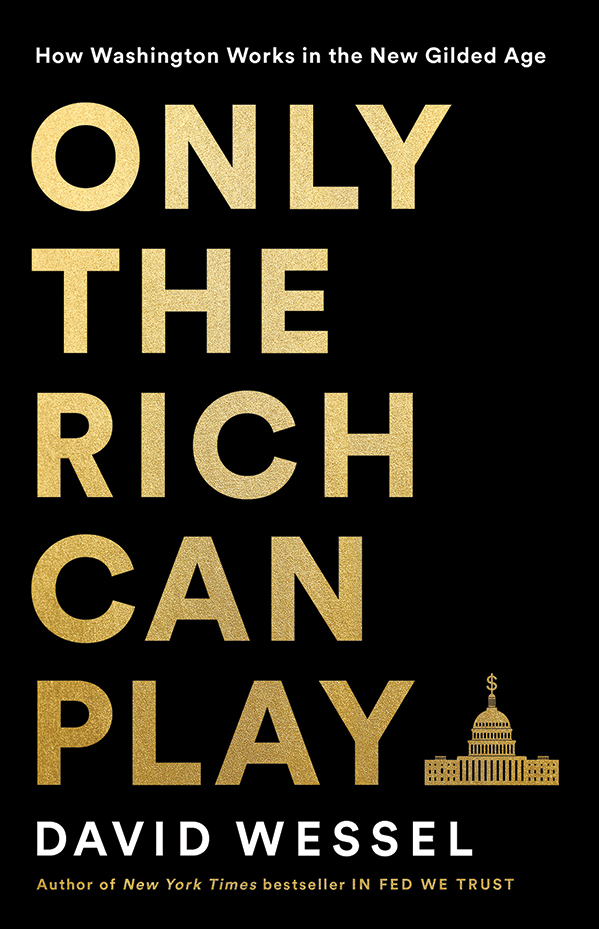 Excerpted from “Only the Rich Can Play: How Washington Works in the New Gilded Age” by David Wessel. Available from PublicAffairs, an imprint of Hachette Book Group, Inc.