A renaissance in the Queen City’s downtown is just one aspect of
this tri-state region’s economic development momentum. 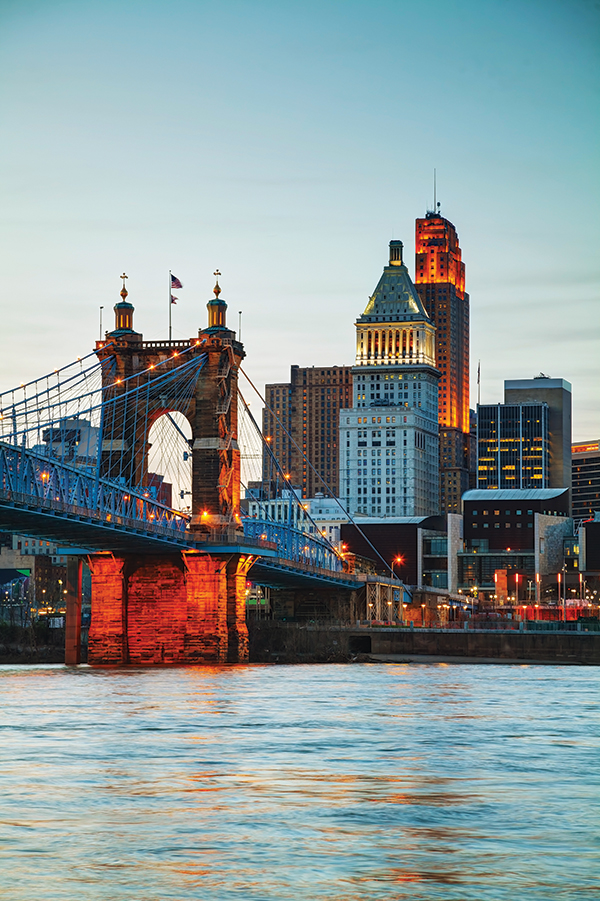 With more than $3 billion in corporate facility investments and more than 10,600 jobs associated with those projects over an 18-month period, the tri-state Greater Cincinnati region tops the charts in this year’s survey of the Ohio River Corridor.

Each year since 2004, we have evaluated corporate project activity in every county that borders the Ohio River’s entire length. Our findings are based on metro-area corporate facility project investment data from the Conway Data Projects Database for the 18 months ending August 31, 2021, evaluated by project totals, related capex and related job creation on a cumulative and per-capita basis.

Last year’s top metro of Greater Louisville places second this year, followed by another bistate metro area shared by Kentucky and Indiana: Evansville, which with 10 projects rocketed from outside the top 10 last year to No. 3.

Over the years, there have been plenty of company expansions on the Kentucky side of the Cincinnati region. But it’s a two-way street. Among projects arriving on the Ohio side in recent days is an expansion in Lebanon by plastic injection molded product manufacturer EPC Columbia, which is adding 50 new jobs and investing $2.5 million.Growth forced the company’s decision to consolidate its operations at one of its more than 14 North America facilities or expand production capacity in Lebanon. The City of Lebanon, Warren County, REDI Cincinnati, and JobsOhio worked with the company to make the winning case for Lebanon.

Divisions Maintenance Group (DMG) in late October announced it is moving its headquarters from Newport, Kentucky, on the river’s banks to The Foundry building in downtown Cincinnati. Founded in 1999, DMG provides facility maintenance services to retail chains and distribution and fulfillment centers across the country — a sector where Greater Cincinnati happens to flourish, as 22 of its tallied 77 projects were in the distribution/warehouse category. DMG had outgrown its space in Newport.

“The Foundry gives us the opportunity to innovate, grow and continue to recruit top talent to accommodate our growth,” said DMG founder and CEO Gary Mitchell. “We sincerely thank Governor DeWine, Mayor Cranley, Steve Leeper of 3CDC, JobsOhio and several others for their unwavering support and guidance as we move into our new space.”

3CDC, the Cincinnati Center City Development Corp., is developing The Foundry after acquiring it in 2019. The project was approved for a job creation tax credit from the Ohio Department of Development, and The Foundry was renovated with assistance from JobsOhio’s Ohio Site Inventory program.

The Foundry, formerly home to Macy’s, is right across from Fountain Square at the intersection of 5th and Vine streets in downtown Cincinnati. DMG said The Foundry provides exceptional brand exposure and public transportation, among other benefits, as it continues a hiring spree that is bringing in dozens of new software and data engineers and account executives.

“It is my pleasure to welcome Divisions Maintenance Group and their 600 new employees to our city’s renaissance,” said Cincinnati Mayor John Cranley. “Bringing Divisions to Fountain Square is truly transformative for our city’s living room.”

Meanwhile, On the Kentucky Side

Among projects landing on that side in recent weeks and months is a $1.8 million headquarters relocation from downtown Cincinnati to the former Two Rivers Middle School building on Scott St. in Covington by DeanHouston+, one of the region’s oldest and largest integrated marketing and branding firms. The move means 40 jobs, with plans for 16 more over the next few years. Elsewhere on that same street, Lighthouse Transportation Services is relocating from a facility it outgrew in Kenton County, and plans to create 64 new jobs in the coming years. 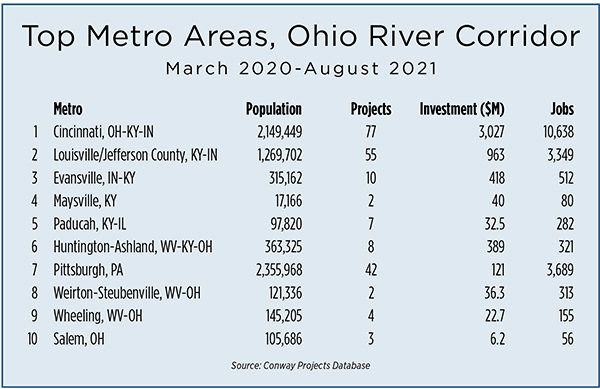 The new office building that will be home to DeanHouston+ is across the street from the Kenton County Public Library and within walking distance of the Ohio River.

DeanHouston+ stated it selected the location specifically to accommodate its growing workforce and for the accessibility and walkability of the Covington area. Even as it grows at offices in Chicago, Los Angeles, Nashville, Shanghai and Stuttgart, the branding, marketing and design agency likes the Cincinnati region’s brand best.

“Like us, Covington is exploding with positive energy and growth, which perfectly aligns with our creative people, culture, and growth objectives,” said Dale Dean, founder and CEO of DeanHouston+. 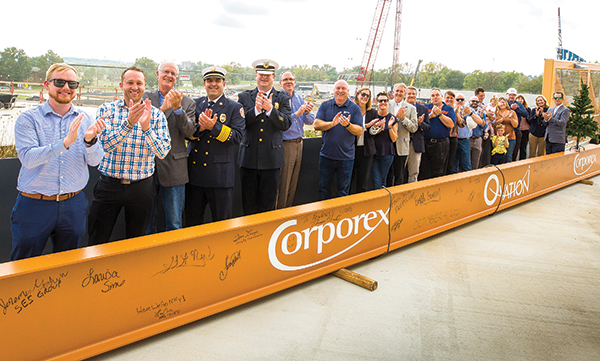 Northern Kentucky development stalwart Corporex in October topped out the latest structure at its Ovation mixed-use development in Newport, Kentucky, a 100,000-sq.-ft. office building. Once complete, Ovation will span 4.5 city blocks at the confluence of the Ohio and Licking rivers.
Photo by Steve Ziegelmeyer courtesy of Corporex and Northern Kentucky Tri-ED