Find Yourself a City to Live In

After growing by an impressive 9.4% between 2000 and 2010, the City of Phoenix’s population grew by 11.2% over the ensuing decade, reaching 1.6 million and becoming the fastest growing large city in the United States. The city proper was one of only 14 cities nationwide to gain at least 100,000 in population, and is now the nation’s fifth largest city after surpassing Philadelphia.

Those new citizens are a subset of the 4.8 million who inhabit the Phoenix-Mesa-Chandler MSA, the 11th largest in the U.S., which grew by 15.6% between 2010 and 2020, welcoming 652,945 more people — essentially the equivalent of adding a Detroit, Memphis or Portland, Oregon.

Whether working, playing or sleeping, those people are looking for a sense of place. And there is no shortage of developments looking to satisfy that demand. Here is a glance at some recent mixed-use and master-planned projects of note:

That might be one factor behind the October 2021 announcement that Howard Hughes Corporation (HHC) and Phoenix business legend Jerry Colangelo are launching Douglas Ranch, a nearly 37,000-acre master-planned community (MPC) in Phoenix’s West Valley. Its goals? 100,000 homes, 300,000 residents and 55 million sq. ft. of commercial development, with residential lot sales starting in the first half of 2022.

The MPC was acquired by Howard Hughes for $600 million from JDM Partners, led by Colangelo, David Eaton and Mel Shultz, and El Dorado Holdings, led by Mike Ingram, a release announced. “Both companies will remain as joint venture partners with HHC on Trillium, the 3,000-acre first village of Douglas Ranch, located in the city of Buckeye, Arizona.”

Colangelo’s JDM Partners is one of the largest owners of entitled land in Arizona. HHC is known for such nationally prominent developments as Summerlin in Las Vegas, The Woodlands and Bridgeland in Greater Houston and the Seaport in New York City.

“To ensure the success of Douglas Ranch, we specifically sought out The Howard Hughes Corporation for its unique capability to build exceptional communities, implement proven best-in-class practices across new platforms at significant scale, and rapidly deliver on build-to-suit opportunities to help businesses relocate,” said Colangelo.

“The characteristics of this community are vastly similar to HHC’s other MPCs across the country, with a prime location, strong demographics in a thriving job market, high barriers to entry, and limited competition,” said O’Reilly. “Phoenix ranks as one of the country›s most affordable metropolitan areas, and as it continues its dynamic growth as an extremely well-situated regional hub, Phoenix’s West Valley is the ideal location for people and businesses looking to thrive for generations to come.”

Among other factors, Douglas Ranch is located off the future home of the I-11 interstate which has received Congressional approval and is projected to create $30 to $60 billion of economic impact in the region. “I-11 will connect Phoenix, Las Vegas, and Southern California, and eventually establish a new trade route between Canada and Mexico by way of Idaho, Arizona and Nevada,” the companies stated.

“During the pandemic, we saw an increase in housing demand, and with the shortage of affordable homes in the valley, we see a tremendous opportunity to develop in the area,” said Kuldip Verma, CEO of Vermaland. “There is a big shortage of finished lots, so we are getting ready for zone changes and pre-plat.”

The plans include 2,500 single-family homes, 500 multi-family units, and commercial and industrial complexes. Once the zoning is finished, Verma plans to either sell or partner with a builder to develop the community.

The City of Glendale and the Arizona Cardinals are collaborating with Plaza Companies on a new 62-acre mixed-use project east of Loop 101, south of State Farm Stadium and to the east of the new Crystal Lagoons Island Resort development. The project’s vision includes up to 600,000 sq. ft. of Class A office development and “will be master planned to provide event parking for State Farm Stadium and the Crystal Lagoons Island Resort while creating a vibrant fan experience,” the parties announced. The project will be modeled after Plaza Companies successes at SkySong, The ASU Scottsdale Innovation Center and the revitalized Park Central in midtown Phoenix.

Among other projects, Glendale recently approved a development supporting RRB Beverage Operations —a joint venture among Ball Corp., Rauch Fruit Juices and Red Bull — in creating a new 140-job can filling facility at the new Woolf Logistics Industrial Campus, part of the “New Frontier District” that also encompasses the Loop 303 corridor and Luke Air Force Base. 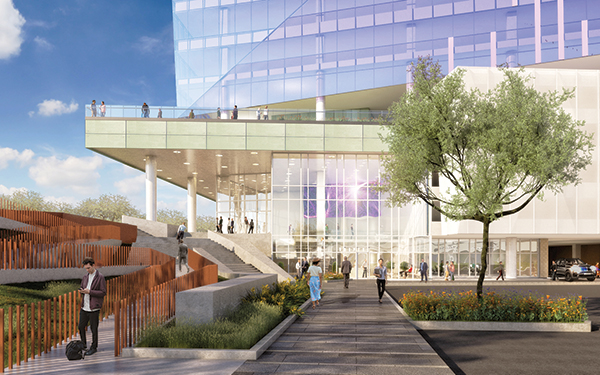 In September, international real estate firm Hines closed on land for its 250 Rio development, a 216,000-sq.-ft. Class AA office building and parking structure between the historic Ash Avenue alignment and the current Rio Salado Parkway, adjacent to Tempe Beach Park. The project is designed to be a signature development at the gateway to downtown Tempe.
Photo courtesy of HHC