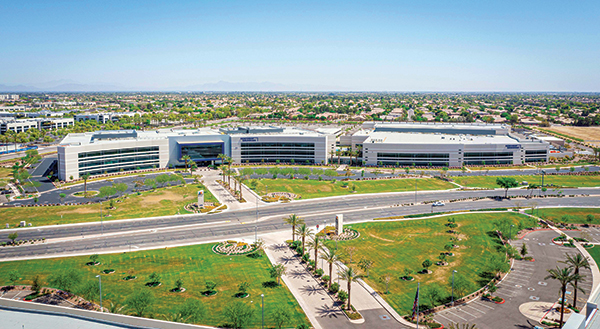 The reasons behind the Greater Phoenix Economic Council earning the International Economic Development Council’s 2021 award for top global economic development organization are nearly as numerous as its booming population.

Redfin’s 2021 report showed Phoenix as No. 1 for new resident inflow. Emsi’s report for Q1 2021 found the metro area has the second largest labor pool in the western U.S. CompTIA’s Cyberstates 2021 report says the region is No. 5 in the nation for projected tech growth.

The state capital region is replete with leaders who “get” economic development, starting with Phoenix Mayor Kate Gallego (see interview), who launched her career as an economic developer at Salt River Project. “I learned first-hand the demands businesses are facing and was able to approach solutions with an understanding of government policy and regulations,” she tells me.

The tens of billions of dollars coming to semiconductors top the headlines. But the region is also becoming known as an advanced manufacturing leader, especially in the realm of electric vehicles, as ElectraMeccanica broke ground in Mesa’s Gateway area for its first U.S. assembly facility, Exro announced its own U.S. HQ in Mesa, and KORE Power will build the first lithium-ion battery plant wholly owned by a U.S. company in Buckeye, where it will employ 3,000. Just down the road in Casa Grande, Lucid Motors in September opened the doors of its Advanced Manufacturing Plant and Lucid Powertrain Manufacturing plant.

They join a region home to nearly 3,000 manufacturing establishments, 238 of which relocated or expanded to the region over the past decade. Among the draws: the Ira A. Fulton School of Engineering at Arizona State University, with nearly 25,000 students and 5,000 graduates annually, and a plethora of proactive programs to address the future of work, the workforce and society.

Chris Camacho, president and CEO of GPEC, credits the leaders of his 22 member communities, Maricopa County and more than 200 private investors for the accomplishments of his team and his region. But his eyes are looking forward.

“What excites me is the next 20 to 30 years, as we become a top-tier biomedical market in terms of total jobs and applied research capacity,” he tells me (see more in the life sciences section of this report). “We think we have a role in the next generation of life sciences advancement.” A new wearable tech center aims to discover opportunities in that sector. And transportation and water infrastructure planning continues to be ahead of the game, supported by a half-cent dedicated sales tax for transportation and by what Camacho calls “intentional policy and behavior.”

The ties that bind GPEC’s 22 communities and other stakeholders continue to reinforce the region’s vitality. As those municipalities stake out their own competitive positions, how do you continue to champion a regional vision?

“It starts with trust,” he says. On that foundation you can then stack the bricks of evidence that regionalism wins, whether it’s a big office win for Tempe that affects the residential base of seven other communities or the collaborative spirit behind the region’s water plan. The next chapter of regionalism is, again, an intentional and collaborative approach, this time to the issues around diversity, equity and inclusion.

It’s all within a context of community health, in the economic and literal senses of the word. What Camacho says of the biomedical horizons for the region could be said of its general horizons too: “We are just scratching the surface.”