It’s All About Precision 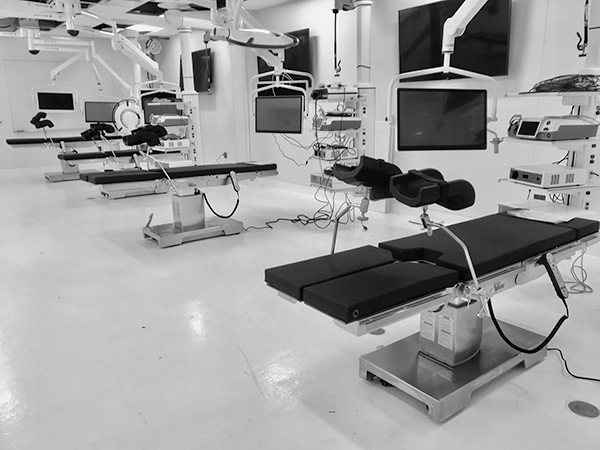 Despite the slowdown in elective medical procedures prompted by the COVID-19 pandemic, 2021 has been a banner year for medical device manufacturers. Capital commitments within the sector, according to a report issued in late July by Silicon Valley Bank, are way up.

“The rise in investments is equally robust,” the report asserts, with 247 medical device companies in the U.S and Europe having raised rounds in the first half of 2021, “putting it on track to smash past tallies in 2020 (300 deals), 2019 (277 deals) and 2018 (263 deals).”
What’s driving the surge? The report identifies “large, later-stage financings,” with seven companies having raised more than $100 million in the first half of 2021, and 14 companies closing on financings between $50 million and $99 million. Robotics is leading the way.

"We have a tremendous pool of really great engineers from Carnegie Mellon and the University of Pittsburgh.”
— Riddhit Mitra, Global Product Director, Smith + Nephew

Softbank’s Vision Fund 2 also led a $150 million funding round for EDDA Technology, a consortium of health tech firms based in the U.S. and China that integrates artificial intelligence and robotics with precision surgery. The company is also behind the IQQA Guide, a surgical navigation medical device for soft tissue organization.

A Home in Pittsburgh

U.K.-based Smith + Nephew recently moved into expanded space in Pittsburgh. Its robotics and R&D operation is to accommodate demand for the company’s CORI Surgical system, a robotics platform that supports orthopedic surgery.

“Ultimately, what we aim to do as a business is to restore people’s bodies and their minds with some really differentiated products when it comes to the replacements or repair of joints. With precision accuracy, we can help patients to enjoy ‘life unlimited’ in all its ways and forms.”

With locations in the medical devices hub of Memphis, Dallas and Andover, Massachusetts, Smith + Nephew leans on Pittsburgh as lead location for development of its CORI Surgical System, a hand-held device used by orthopedic surgeons.

“As the surgeon is cutting,” says Mitra, “there is a virtual depth where you don’t want to cut any further. So, even if the trigger is pressed, our device recognizes when it is about to get too deep, and it automatically cuts off. The cutting tool essentially disengages to prevent mistakes from happening. So, in robotic fashion, we give extreme precision control to surgeons, even if they are moving their hands.”

The technology was created at Pittsburgh’s Carnegie Mellon University and commercialized by Blue Belt Technologies, founded in Pittsburgh in 2012 and acquired by Smith + Nephew in 2016.

“We have a tremendous pool of really great engineers from Carnegie Mellon and the University of Pittsburgh,” says Mitra. “We even recruit from overseas. That’s not a problem in Pittsburgh.”

Smith + Nephew, now occupying four floors, is the inaugural tenant at The Stacks at 3 Crossings in Pittsburgh’s Strip District, which fashions itself as “foodie heaven, a one-half-square-mile shopping district chock full of ethnic grocers, produce stands, meat and fish markets and sidewalk vendors.”

Building Upon a Legacy in Nebraska

New Jersey-based Becton Dickinson has contributed several hundred million injection devices to the federal campaign to vaccinate the country against COVID-19. Bolstered by its massive plant in Phelps County, Nebraska, the company is one of the world’s largest producers of insulin syringes. In early October, the company announced the completion of new syringe and needle manufacturing lines, under a hefty federal contract in deep red Nebraska.

In July 2020, the Department of Health and Human Services Assistant Secretary for Preparedness and Responses (ASPR) invested some $42 million into a $70 million capital project to further expand BD’s operations in Holdrege.

“The expansion,” BD said in a release, “builds on the company’s deep commitment and legacy in supporting U.S. vaccination efforts through the domestic manufacturing of needles and syringes.”

As Site Selection reported in July, in recognition of Phelps County as a rural top performer, BD is “a serial investor in Holdrege of more than $200 million over the past five years. Becton Dickinson arrived in 1996 and now is the county’s biggest employer.”

Becton Dickson operates three other manufacturing facilities in Nebraska, two in Columbus and another in the heart of Broken Bow, smack dab in the middle of the Cornhusker State.