Railport momentum builds across the nation. 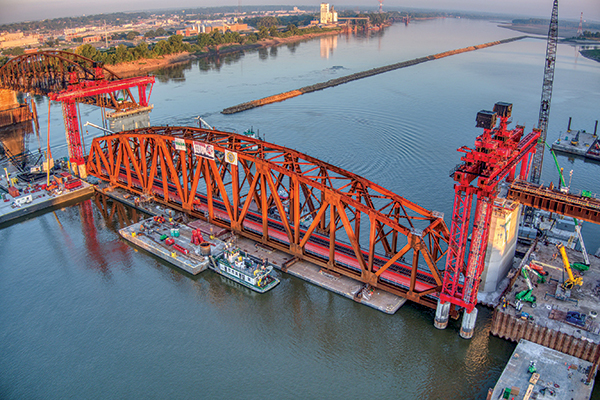 Dating to 1890, the Merchants Bridge over the Mississippi River at St. Louis serves six Class I railroads and Amtrak in the nation’s second largest rail hub by car interchange volume.
Photo by Trey Cambern Photography courtesy of Walsh Construction
by ADAM BRUNS

The $222 million replacement of the Merchants Bridge across the Mississippi River at St. Louis reached a milestone in September with the installation of the first of three new trusses. Dating to 1890, the Merchants Bridge serves six Class I railroads and Amtrak in the nation’s second largest rail hub by car interchange volume and third largest by gross tonnage.

Work began in 2018 and, when completed in early 2023, the new double-track bridge is expected to provide an alternative to more congested rail regions like Chicago.

“With a doubling of the capacity of the bridge, the project will allow for an expanded service to assist in meeting projected future freight and passenger rail demand, reduce grade delays for motorists and emergency vehicles and ensure reliable rail connections across the Mississippi River into the next century,” said a release by the St. Louis Regional Freightway, which since 2016 has identified the bridge replacement as the region’s top freight infrastructure priority.

“The Class I railroads relying on the Merchants Bridge serve the St. Louis region’s manufacturing and logistics companies that are part of an interdependent supply chain requiring access to markets on both sides of the Mississippi River, across the United States, and internationally,” said Ron Tindall, president of the Terminal Railroad Association of St. Louis (TRRA). “Implementation of this project will allow those companies — and others moving freight from coast to coast through our region — to move that freight faster, more cost-effectively and more reliably. Just as important, TRRA estimates our impact in the region will almost double, as we generate more than $456 million in local economic activity over a 20-year period.”

The TRRA is paying for 90% of the project with the rest coming from a $22.45 million Consolidated Rail Infrastructure and Safety Improvements (CRISI) grant from the Federal Railroad administration in winter 2020.

The project is just one of many examples of rail-oriented industrial development taking place at inland locations across the country, many of them from OmniTRAX, the logistics solutions provider and transportation affiliate of Colorado-based The Broe Group that operates more than 20 rail systems in North America.

In early October 2021, OmniTRAX launched its Rail Ready Sites program on the Alabama and Tennessee River Railway (ATN). OmniTRAX is marketing sites that span the ATN’s 120 miles from Birmingham to Guntersville, with transload and multimodal options and Class I connections to CSXT and Norfolk Southern.

In August, the company designated two new Rail Ready Sites along the Panhandle Northern Railroad in Texas in partnership with Borger Inc. (Borger’s Economic Development Corporation).  The Rail Ready program’s initial footprint was 10 sites along the New Jersey division of the Winchester and Western Railroad (with direct access to both CSX and Norfolk Southern Class I lines).

Among the company’s most recently inked agreements is a new partnership with the River Ridge Development Authority in Jeffersonville, Indiana, where OmniTRAX will become the new rail partner of River Ridge Commerce Center. Located on 6,000 acres along the Ohio River in Southern Indiana, River Ridge is home to more than 60 firms with over 10,500 workers, and still has about 4,000 acres available for development, including a 1,400-acre megasite.

OmniTRAX’s Stockton Terminal and Eastern Railroad will serve a new transload terminal being developed in San Joaquin County, California, by Salt Lake City–based Savage, a global infrastructure and supply chain services company. The terminal will serve as a gateway for the distribution of renewable fuels into the state of California. Savage Railport – Stockton is part of the company’s growing Savage Transload Network and provides a link in the supply chain for transporting renewable diesel and biodiesel produced in the Gulf Coast and U.S. interior for use by West Coast consumers.

Among its other projects, Savage has constructed and is operating the first intermodal terminal in Idaho in Pocatello, primarily to expedite movement of agricultural products. The company is working with Canadian Pacific Railway at a new transload terminal at CP’s rail yard in Bensenville, Illinois, that is focused on the needs of construction customers needing to move lumber and building materials between cars and trucks. The company is also working with Kansas City Southern to construct a multi-commodity railport in Mossville, Louisiana. Expected to be operational in January 2022, it will optimize and provide a critical link in the supply chains of Lake Charles area refineries, chemical plants and other businesses.