Capacity growth in Charleston aims to boost customer supply chains and relieve port congestion all at once. 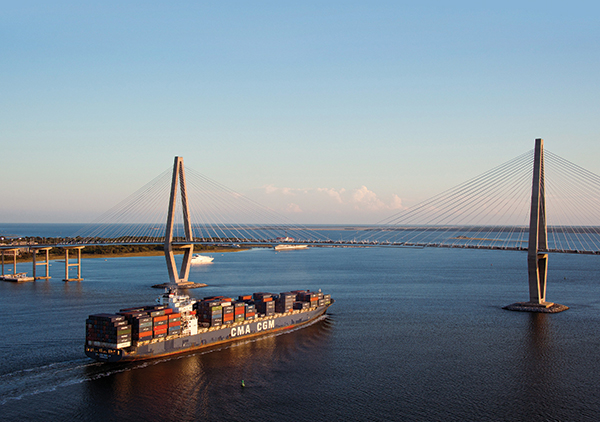 Mirroring the growing capacity of Charleston Harbor under the water’s surface is a profound expansion of capacity above ground by South Carolina Ports in order to unclench a global knot of port congestion.

When the Charleston District of the U.S. Army Corps of Engineers was founded exactly 150 years ago during Reconstruction, its primary purpose was to establish the harbor as a modern-day port.

“Charleston will soon become the receiving and distributing point for a vast section of the country now supplied by longer lines and at greater cost by Baltimore or New York,” said an 1878 editorial in the News & Courier. “The field is open for Charleston.”

The Corps has dredged the harbor every year since. The project it’s pursuing today — deepening the harbor from 45 to 52 feet — will prove crucial to reconstructing the post-pandemic economy of the United States as  those longer lines grow longer by the day, with the queue at southern California ports closing in on 100 vessels in October.

The crunch is caused by an e-commerce surge that saw global sales rise by 39% in the first quarter of 2021 compared to Q2 2020. Retailers are looking to places such as Charleston to both offtake goods and receive them at new facilities. Witness two huge projects announced in October at the Charleston Trade Center industrial campus in Summerville, South Carolina.

Twin Star Home, a designer and manufacturer of indoor and outdoor living products, will occupy the entirety of a 1,019,200-sq.-ft. building, tripling its warehouse capacity in Charleston. Sagebrook Home, a California-based home decor company, will occupy a 430,920-sq.-ft. building that will serve as its East Coast distribution center. The company said it was drawn to the location’s direct connectivity to the Southeast region and access to the Port of Charleston.

“Charleston Trade Center is a microcosm of the city’s booming industrial economy for port-related products,” said JLL Managing Director Lee Allen of a market that has nearly 4.5 million sq. ft. of industrial space currently under construction, including Walmart’s $220 million, 1,000-job import distribution center set to open in Ridgeville in early 2022.

The Keith Corporation (TKC) and Singerman Real Estate broke ground on the 3-million-sq.-ft. Charleston Trade Center in 2016 and have since invested $205 million while welcoming more than 1,000 jobs.

“Five years ago, we saw an incredible opportunity to develop a state-of-the-art industrial campus that would capitalize on the market’s rapid growth and South Carolina Ports’ robust activity,” said Alan Lewis, managing industrial partner at TKC. “Today, we’re proud to have had the opportunity to bring Charleston Trade Center to life during such a transformative era for e-commerce and logistics.”

South Carolina Ports’ timely investments in port infrastructure will help that era be transformative for the economy.

“The significant challenges in the global supply chain supply chain present an opportunity for cargo owners to diversify the port gateways they use to move goods,” said South Carolina Ports President and CEO Jim Newsome in his 13th and final State of the Port address in October as he looks to step down next summer. “South Carolina Ports has the berth availability, cargo capacity and fluidity to handle the record cargo volumes and unprecedented amount of retail imports flowing into the Port of Charleston,” said Newsome, who earlier this year was inducted into the International Maritime Hall of Fame. “Capacity is the new port currency, and South Carolina Ports has the right capacity at the right time to meet retailers’ needs to keep freight moving.”

South Carolina Ports achieved a record fiscal year 2021 and a record first quarter of fiscal year 2022 for containers handled. It’s all part of the plan as the organization has invested more than $2 billion in recent years to enhance existing infrastructure and open the first new U.S. container terminal in more than a decade, the Hugh K. Leatherman Terminal. Leatherman Terminal adds a berth and 700,000 TEUs of capacity. Modernization of the Wando Welch Terminal means it will soon have 15 ship-to-shore cranes with 155 feet of lift height.

Micah Mallace, senior vice president of sales and marketing for South Carolina Ports, says inventory build-up has been most companies’ short-term strategy instead of reshoring. “Because we have a brand new terminal and we have capacity, we are using that capacity to accommodate customers and provide a buffer for their supply chains,” he says, including some temporary container storage on terminal. But as retailers look for pop-up solutions during peak season, off-terminal solutions are at hand too.

“If you’re a retailer 1,000 miles from here, you may not know which trucking firm or 3PL has capacity,” says Mallace. “We do a lot of marrying up of who’s got capacity and who needs it. I just met with one of the largest retailers this week. They couldn’t find any pop-up capacity anywhere on the East Coast, and with one call to us, they set up four pop-up facilities in Charleston alone. They said, ‘We never would have found those four had we not asked you.’ It’s just the basics of knowing your local market.”

Not to be forgotten in the blur of activity is South Carolina Ports’ own role as a job creator, as the organization is hiring 150 people to support the growth. 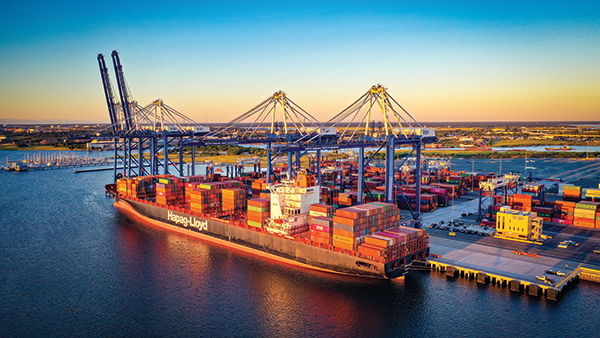 Phase One of South Carolina Ports’ Leatherman Terminal adds 700,000 TEUs of annual throughput capacity and an additional berth to the Port of Charleston.
Photo by Walter Lagarenne courtesy of SC Ports Authority