Texas, California and Louisiana lead the way in the U.S., while best practices can be found across the globe. 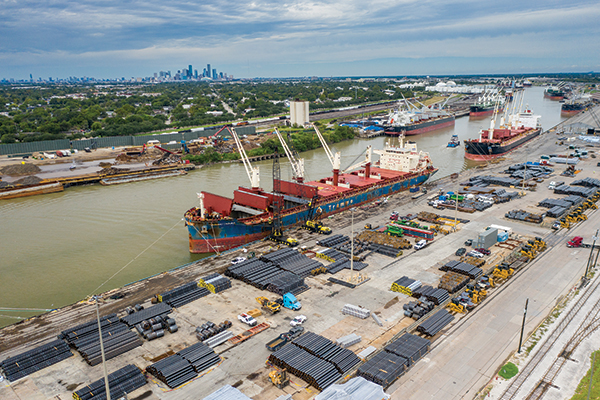 No. 4-ranked FTZ 84 in Harris County, Texas, is administered by the Port of Houston Authority, whose Ports Houston operation is seeing record container growth and a significant comeback in steel.
Photo courtesy of Ports Houston
by ADAM BRUNS 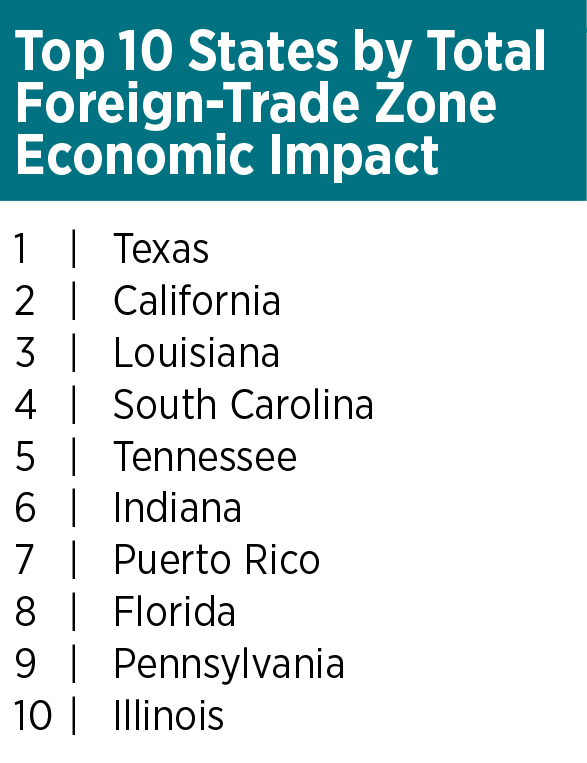 At last count, there were some 5,400 special economic zones around the world. Objective data tracking corporate investments in all of them are hard to find. But in the United States and territories, at least, we have numbers to work with.

There are 261 approved Foreign-Trade Zones in the United States. Repeating an exercise we first conducted last year, Site Selection and Conway Analytics have extracted relevant jobs, manufacturing and merchandise received/exported data from the latest U.S. FTZ Board report to Congress (published in August 2021), indexed the numbers and ranked the Top 20 U.S. Foreign-Trade Zones by Economic Impact and Top 10 States by Total FTZ Economic Impact.

In the individual zone category, the Port of South Louisiana’s FTZ 124 in Gramercy ranks No. 1, followed by San Jose’s FTZ 18 in California at No. 2 and then FTZ 78 in Nashville at No. 3, administered by the metro government of Nashville and Davidson County. Zones in Houston, Los Angeles and Indianapolis follow. 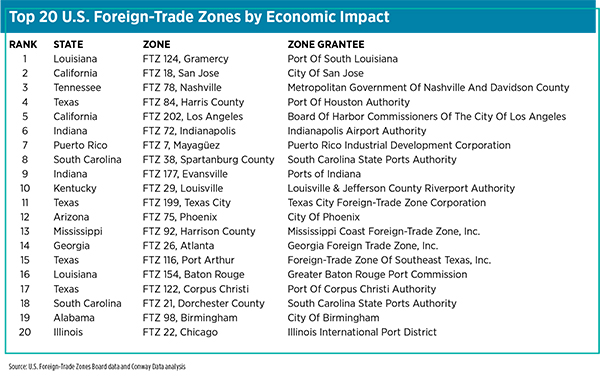 With four of the top 20 FTZs, it’s no surprise that Texas leads our list of Top 10 States, followed by California, Louisiana, South Carolina and Tennessee. Indiana and Florida jump into the Top 10 this year, while Kentucky and Georgia drop out and Illinois drops from No. 5 to No. 10. Notably, both Indiana and South Carolina claim two FTZs in the Top 20, and Puerto Rico not only claims the No. 7 FTZ in Mayagüez, but the No. 7 spot among all U.S. states and territories for overall zone impact.

Exports from facilities operating under FTZ procedures amounted to over $94 billion. The export figures do not include certain indirect exports involving FTZ merchandise that undergoes further processing in the United States at non-FTZ sites prior to export.

The FTZ Board’s decisions included the reorganization or expansion of five zones under the alternative site framework, which allows for specific new company investment locations to be more or less subsumed into the FTZ, as well as decisions on 67 applications and notifications for new or expanded production authority. FTZ Board Staff processed an additional 232 requests that primarily included minor boundary modifications.

Container ports are experiencing unprecedented congestion, especially on the West Coast, which is driving strong activity at other ports affiliated with major FTZs such as No. 4-ranked FTZ 84 in Harris County, Texas. Port Houston saw double-digit TEU growth for the seventh consecutive month in September at 281,500 TEUs, up 11% compared to the same month last year. Year-to-date, TEUs were up 16% compared to 2020. 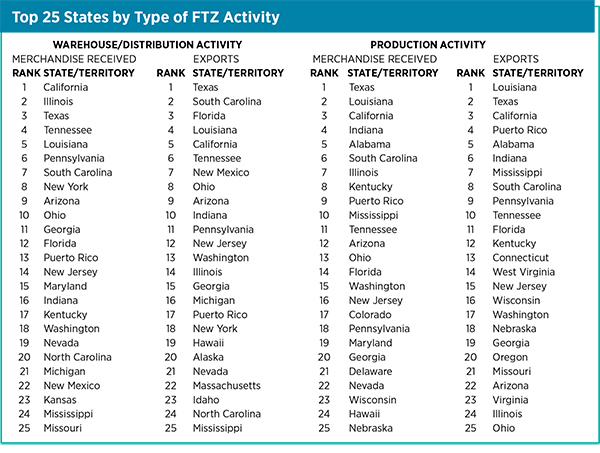 “With holiday season shopping on the horizon, containerized cargo is expected to remain strong through what is shaping up to be an extended peak season through Barbours Cut and Bayport Container Terminals,” a release from Port Houston stated. Steel imports are also up, increasing 161% in September 2021 compared to September 2020 and by 28% year-to-date. The growth reflects increased activity in the energy industry. “Texas onshore and offshore rig count is up 243 rigs from October 1, 2020, almost double compared to last year, fueling an increase in demand for Oil Country Tubular Goods (steel pipe) for drilling operations,” said the port.

A major dredging contract was just awarded in October for the $1.1 billion expansion of the Houston Ship Channel, expected to be complete in 2026.

“Providing efficient and predictable cargo movement through our port during an unprecedented surge in global imports continues to be a top priority for us,” said Roger Guenther, executive director at Port Houston, in September. “We expect elevated levels in the supply chain to continue well into 2022 and will continue to explore opportunities including accelerating an already aggressive capital investment strategy for our terminals to stay in front of the demand.” 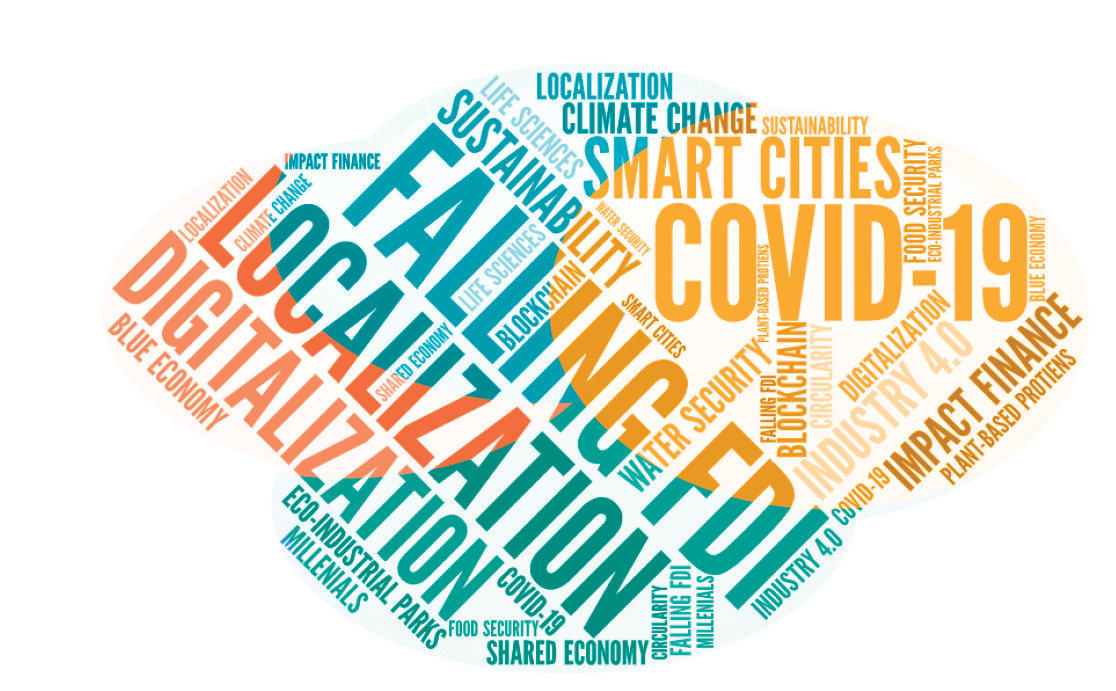 Zoë Harries is partner and director at EZDA, a UAE-based alliance of economic zone specialists that she co-founded with Krysta Fox, who led the transformation of the award-winning Dubai Multi-Commodities City (better known as DMCC) free zone in Dubai between 2012 and 2019. In recent months Harries has presented a number of times on economic zones best practices and the future of economic zones. The word cloud that appears in this article displays some of the world’s strongest economic zone trends, including blue economy, smart cities and more holistic stakeholder engagement.
While a lack of recent global project data prevents Site Selection from assembling a defensible ranking of world SEZs, several of the zones highlighted by Harries have been ranked in these pages in past years. With her permission, here is a distillation of her recent findings about 10 examples of best practices. 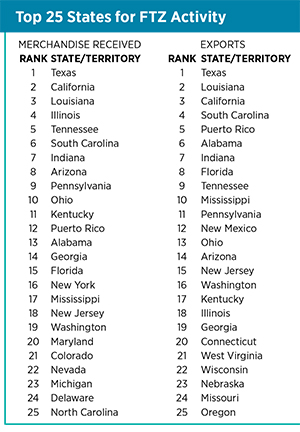 Coyol Free Zone, Costa Rica: Home to 30 companies including seven of the world’s top medical device firms, CFZ  “stands out for the recruiting and training services it provides for its tenants,” Harries says. An expansion from Bayer landed there in October. Coyol Free Zone is a specialized park with an investment of over $ 400 million, which allows them to have a first-class infrastructure and LEED-certified buildings. The park allocates 12% of its 107 hectares for preserved and green areas. Constant government support for multinationals has been provided to ensure operational continuity during unprecedented times. Providing constant communication and guidance to multinationals on new regulations, business facilitation and policies, as well as rigorous infrastructure, have allowed companies to work from home, maintaining quality standards.

DMCC Free Zone, United Arab Emirates: Formed by decree in 2002, DMCC grew from 3,300 to 16,000 companies between 2012 and 2020. The zone is based on a 100-hectare [247-acre] land bank that has been master planned to enable sub developers to leverage value through mixed-use assets including office, residential, hotels, light industrial and warehousing facilities.

Khalifa Industrial Zone (KIZAD), United Arab Emirates: Launched in 2010 by Abu Dhabi Ports, KIZAD is an integral part of the Abu Dhabi Economic Vision 2030, a roadmap for sustainable growth of the emirate’s economy and the prosperity of its people. Abu Dhabi’s integrated trade, logistics and industrial hub is earmarked to set new standards for industrial zone infrastructure, environment and operation. KIZAD has announced a special incentives package for SMEs, making more than 75 of its 100 free zone services free of charge.

Krakow Technology Park, Poland: Krakow Technology Park Ltd. manages the Krakow SEZ and technology park and offers services that include a startup acceleration program and incubator for tech startups; coworking space; R&D services and seed funding. The organization also supports the creative sectors in Małopolska, with a specialized offer including Multilab KPT, a film post-production studio with the best equipment for color correction the area, and the Digital Dragons conference for the game development industry in Eastern and Central Europe. 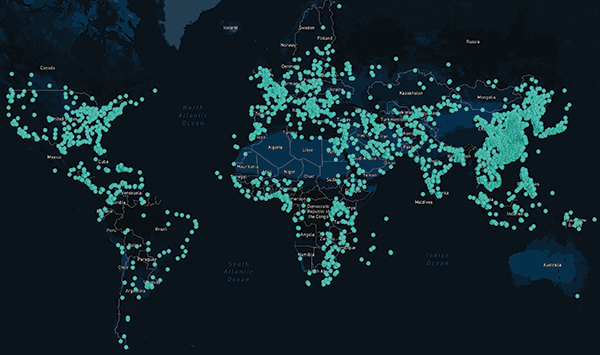 This image comes from Adrianople Group’s new resource it published in October, which it calls the world’s largest map of Special Economic Zones ever published. For more, visit www.openzonemap.com. Image courtesy of Adrianople Group

Port of Ventspils, Latvia: The Freeport of Ventspils boasts a diversified base of manufacturers, and tenants belonging to the logistics and services sectors, including names like consultancy Accenture. “The zone has spent efforts in developing its infrastructure and marketing activities to strengthen its brand. It has also been working with local stakeholders such as vocational education institutions to develop local talent in high-added-value sectors like IT, telecommunications, electronics, astronomy, engineering and mechanical engineering.” The Freeport of Ventspils is in the process of developing new rental production spaces.

Ras Al Khaimah (RAKEZ), United Arab Emirates: Ras Al Khaimah Economic Zone (RAKEZ) was established to oversee and consolidate the specialized parks and clients of both Ras Al Khaimah Free Trade Zone (RAK FTZ) and RAK Investment Authority (RAKIA). RAKEZ encompasses a network of five zones scattered across the emirate. It hosts about 15,000 companies, most of them SMEs active in 50 industries. “RAKEZ stands out for the variety of incentive packages it introduced in recent months, which include a support package for female entrepreneurs, new incentives for both manufacturers and startups, as well as a 50 million dirham ($13.6 million) COVID-19 relief fund to support tenants through current market uncertainties. The pandemic has also accelerated the digitization of RAKEZ’s services. Today, onboarding of new tenants can be facilitated in full digital mode, thanks to an expanding range of e-payment services.”

Mauritius Freeport Development, Mauritius: Mauritius has developed a major logistics hub next to the port of capital Port Louis within the territory of the Mauritius Freeport. The strategic location has attracted major shipping lines, express courier services and freight-forwarding companies to the Freeport logistics platform. Freeport activities have been boosted by the ongoing upgrade of the adjacent seaport, including a $300 million investment to construct a breakwater to reduce downtime at the port during bad weather conditions, as well as expansion of the Freeport area. Adjacent to the seaport of Port Louis, MFD has developed the largest logistics center in the Indian Ocean.

Tanger Med Zones, Morocco: TangerMed is a global logistics gateway located on the Strait of Gibraltar and connected to 186 ports worldwide. It provides a processing capacity of 9 million containers, 7 million passengers, 700,000 trucks and 1 million vehicles. TangerMed is an industrial hub for more than 900 companies from different sectors such as automotive, aeronautics, logistics, textile and trade and represents an annual amount of approximately $8 billion. The TangerMed Zones industrial development platform groups together the Tanger Free Zone, Tanger Automotive City, Renault Tanger Med, Tetouan Park and Tetouan Shore areas of activity.

WaigaoqiaoFree Trade Zone is China’s largest, with a diversified mix of industries/clusters whose most recent focus is on life sciences, data centers and ICT. In 2020 117 multinational corporations had set up their Asia Pacific and Chinese headquarters in the zone — more than anywhere else on the Chinese mainland, say zone officials. Financial reforms have been introduced in the pilot zone, facilitating investment and trade, promoting a headquarters economy, and smoothing the way for financial and foreign exchange transactions to support economic activities in the zone.

A campus from Carnegie Mellon University is central to the business proposition of Kigali Innovation City, a 70-hectare (173-acre), $2 billion project adjacent to Kigali SEZ that is designed to kickstart the region of Kigali, Rwanda’s competitiveness in the digital services sector. Watch for an exclusive Site Selection Online Insider about the role of SEZs in Rwanda’s rebirth at SiteSelection.com in November.
Photo courtesy of Adrianople Group and Carnegie Mellon