Ports and Central Hubs Top Logistics Locations, As China Gears Up for the Next Wave 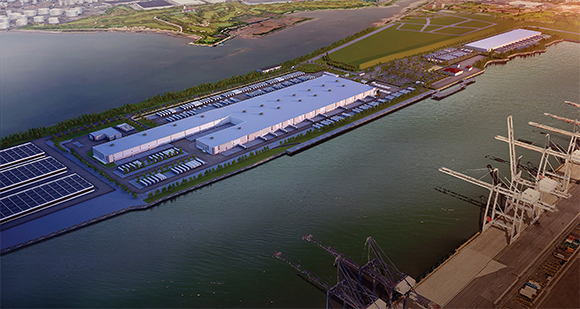 Of the approximately 3,840 corporate logistics or distribution facility investments tracked globally by Site Selection’s Conway Projects Database since January 2016, Amazon accounts for 365, or 9.5%. Which still leaves 90% for the rest of the goods movement industry to work with.

All told, those five-and-a-half years of projects add up to nearly 1.5 trillion sq. ft. of space. That translates to more than 52 square miles, the equivalent of a city about the size of Long Beach, California.

“Ships arrived last month to move these empty containers out of the harbor and clear valuable terminal space as we handle historic amounts of trade,” said Port of Long Beach Executive Director Mario Cordero in early August. “These boxes are a valuable commodity in the overstressed global supply chain.”

So are regular cardboard boxes, it turns out. E-commerce use of corrugated grew by nearly 40% in 2020, according to consultancy Smithers, which projects the $43.1 billion market for e-commerce packaging (primarily corrugated boxes) will grow by 12% a year to more than $75.1 billion by 2025. Much of that growth is anticipated to come in markets still playing catch-up in the e-commerce game: South America, the Middle East and Africa among them.

Whichever sorts of boxes are being sorted, companies are balancing just-in-time with just-in-case planning to invest in facilities to hold and move goods. On the same day that the Port of Long Beach numbers were released, JLL’s global logistics survey of 720 of its experts in 43 countries reported “overwhelmingly positive” sentiment suggesting the growth will continue, driven by e-commerce but “likely to broaden and include growing sectors such as parcel delivery, 3PLs, healthcare and construction.” 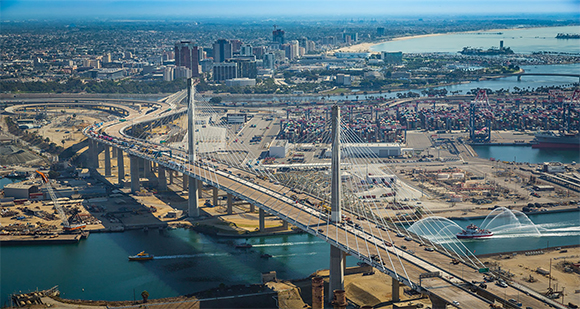 The $1.5 billion Long Beach International Gateway bridge at the Port of Long Beach opened in October 2020 and was named in May 2021. The port in July set a record for container volume handling.
Photo courtesy of POLB

“E-commerce continues to propel a huge wave of industrial leasing globally, and the demand is becoming more widespread across all industries,” said Craig Meyer, president, Industrial, JLL. “The number of unique active tenants has surged as companies rush to build up their e-fulfillment capacities and, despite a normalization of the market as the effects of the pandemic wind down, we expect to see this trend hold strong over the next three years.”

JLL reported that e-commerce represented over 16% of 2020 total logistics and industrial leasing in the United States, 22% across Europe and as much as one-third in China.

The world’s leading delivery companies aren’t missing the boat. Responding in part to 33% more shipments in Q1 2021 than Q1 2020, DHL Express is investing more than $360 million between 2020 and 2022 in new and existing facilities in the Americas. Among the locations:

In the U.S. alone, more than 2,600 new jobs are expected to be filled throughout 2021, said DHL, in addition to the 3,000 that were created in 2020. These new jobs will include 1,100 new positions at the DHL Americas Hub at Cincinnati/Northern Kentucky Airport (CVG), and nearly 200 at the expanded hub in Miami, Florida. 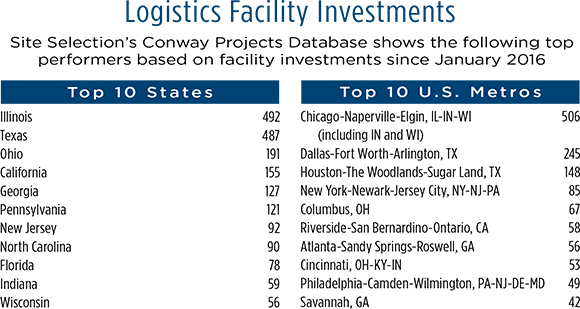 Digging Through the Numbers

An examination of Site Selection’s project data since January 2016 shows a preponderance of projects landing near gateway ports and geographically central hubs, supplemented by hub-adjacent communities ready to catch a ride on the e-commerce train.

In Europe and the British Isles, the UK’s 196 projects over that time period led the way, followed by Germany with 111 and Poland with 75. The next tier down found 31 projects in Spain, 30 in the Netherlands, 26 in Romania, 24 in France and 22 in the Czech Republic.

Across Asia and Oceania, even with a clear gap in data reporting, China was the clear leader in a virtual tie with Australia at just under 60 projects, followed by such countries as Singapore, Malaysia, Thailand and South Korea with numbers in the teens or high single digits. Sydney, Shanghai, Singapore and Chengdu were city leaders. In the Middle East, the United Arab Emirates tallied 20 to lead the way.

In North America, we’ve tracked 169 projects in Canada since January 2016, led by such cities as Calgary (16 projects) and Montreal (14), Toronto and its metro-area municipalities of Mississauga (13 on its own), Caledon, Brampton and Milton. Mexico comes in with 40 projects, led by the federal district around Mexico City and the state of Nuevo Leon.

“In order to sustain future growth, survey respondents pointed to two concerns that must be addressed,” says JLL. “The first is the limited supply of entitled land for logistics, with firms already delaying decisions because of a lack of space.” A total of 43% of respondents consider limited availability of entitled land as the leading constraint on occupier demand, while 36% see a lack of available speculative buildings as the main constraint. Vacancies are sub-3% in several cities including Toronto, New York, Los Angeles, Milan, Tokyo and Hong Kong. “Moreover,” JLL states, “65% of respondents in Germany, China, the Netherlands and Australia deemed limited availability of entitled land as the biggest constraint on occupier demand.”

Meanwhile, Q2 rents were the highest ever recorded. And a robust pipeline of new projects across North America and the globe has been trying to keep pace.

Transwestern reported in early August that Q2 positive net absorption in the U.S. totaled 102.2 million sq. ft., with quarter and year-to-date leaders topped by Atlanta, Chicago, Dallas-Fort Worth and California’s Inland Empire. “Additionally, the national vacancy rate dropped to 5.2%, its lowest level since the start of the pandemic, helping to drive average rent up to $6.96 per square foot,” Transwestern reported. “At midyear, seven out of 44 markets saw vacancy below 4%, including Greensboro, Inland Empire, Los Angeles, Nashville, New Jersey, Orange County (California), Raleigh-Durham and San Jose-Silicon Valley.”

“High rents and supply chain issues are making secondary logistics markets increasingly attractive to occupiers and investors,” said Matt Dolly, research director at Transwestern, “and we’re closely following markets such as Savannah, Las Vegas, Charleston, Phoenix and San Antonio, all of which have experienced expansionary conditions over a three-year period.” 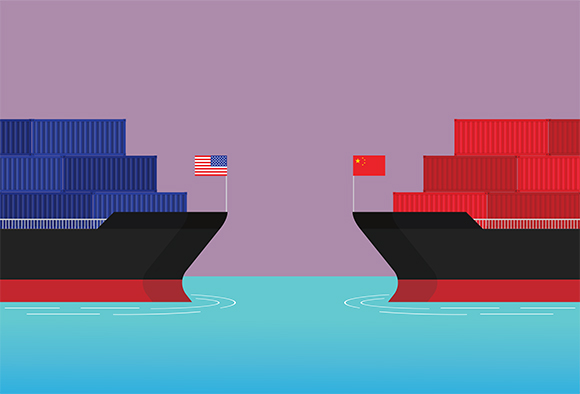 Chinese consumers buy everything online. Meteoric growth of e-commerce over the past few years shows no signs of abating, but instead is only extending its reach. According to MOFCOM, the 2019 national e-commerce transaction value (all goods and services) stood at US$5 trillion with an online retail value of US$1.7 trillion. With a 10.9% increase YoY from 2019 to 2020 equating to a US$1.8 trillion in 2020, China stands atop the global e-commerce market. In 2020 44% of all retail in China was e-commerce. In fact, last year, China’s e-commerce already surpassed all other countries combined (see graph). In 2021, e-commerce is expected to become the primary retail commerce platform in China, surpassing physical outlet sales.

In 2020, the COVID-19 pandemic and its requirement to stay safe at home created a tipping point for the older generation who had not yet embraced the e-commerce world. Countrywide lockdowns were strict but short. By June 2020, public mobility was highly restored, but the online train had already left the station, transforming the daily activities of the elderly population who now had been forced to jump on board.

Smartphones became a necessity, as Chinese authorities established and mandated a digital health QR Code — a semaphore color rating system — that in real time continuously updated and tracked COVID-19 cases and possible exposures. Everyone in China, from the most rural villages to China’s megapolises, became connected and integrated into the nation’s online network. Mobile internet access supplanted desktops and pulled the older generation into the e-commerce consumer class.

Today, 99% of China’s 900 million internet users access the web through their phones. E-commerce platforms dominate consumers’ “digital time” with a massive information exchange occurring through “likes,” postings, watching videos and livestreaming. People are not only looking to buy products, but sharing information and recommendations, as well as watching “artistic events” hosted by celebrities and influencers. Today, China’s e-commerce market is a staggering three times the size of the U.S. market. Across all ages in China, a new cultural reality has emerged — “retail is entertainment.”

The e-commerce explosion is driving the rapid launch and rollout of 5G, which in turn is facilitating the digitization of Chinese industry. Compared to the U.S. which has a lower build-out of one cell site for every 6,965 people in 2020, 5G stations in China were being established at an amazing rate of 12,000 per week and by year-end China had 110 million 5G users and over 700,000 5G stations covering all prefecture-level cities. This pace of change is only accelerating: China is projected to have 1.5 million 5G stations by the end of 2021.

In the last decade, China has been striving to transition its export-driven economy to one based on domestic demand. The COVID-19 pandemic essentially accelerated China’s transformation into a digital economy led by its enormous e-commerce sector, which continues to gain momentum. In turn, e-commerce led to rapid 5G deployment which now has begun the intelligent transformation of industry and industrial parks, paving the way for China to become the technology provider to the world.