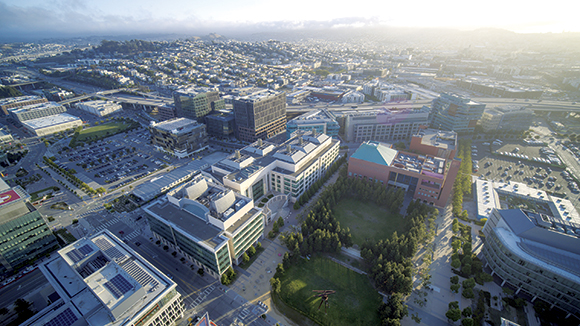 Thermo Fisher announced in May it will build and operate a cell therapy development, manufacturing and collaboration center in leased space on the University of California, San Francisco’s Mission Bay campus, which includes biomedical research facilities and hospitals. UCSF is a crucial catalyst for the Bay Area’s world-leading life sciences cluster.
Photo by Matt Beardsley/UCSF courtesy of PRNewsfoto/Thermo Fisher Scientific
by Joanne Pizzo

Leave it to a nun to get it done.”

The good sisters have always seemed to have a way of making what seems impossible happen. In 1999, Emmanuel College, a small Catholic liberal arts college in Boston’s Fenway neighborhood, had fewer than 500 students, a dwindling endowment and none of the amenities that attracted students to bigger universities in the Boston college market. The 17-acre campus was in danger of closing when the college’s president, Sister Janet Eisner, brokered a deal.

Located near top hospitals Dana-Farber Cancer Institute, Boston Children’s Hospital and Brigham and Women’s Hospital, the college partnered with Merck, one of the world’s largest pharmaceutical companies, which signed a 75-year ground lease with the college in 2000 for $50 million to build a 300,000-sq.-ft. lab building on an acre of campus, opening the new facility in 2004.

The school’s partnership with Merck has boosted the college’s profile as an institute for scientific research, and Emmanuel’s endowment has grown from around $8.6 million in 2000 to approximately $86 million today. At one point, Brigham and Women’s Hospital discussed a long-term ground lease for a different parcel on the Emmanuel campus, with possible plans for a medical research facility. Emmanuel continues its long-standing Nursing partnership with Brigham and Women’s.

by Joanne Pizzo , Planning Plus

A college or university’s real estate assets are often an untapped source of potential for unlocking capital, attracting and retaining students, supporting the academic mission, AND, as a large portion of an institution’s balance sheet, driving down fixed costs. Real estate assets are there to be optimized. Here are 10 ways to do so, many of which present opportunities for corporate and institutional partners:

1. EVALUATE: Colleges and universities should catalogue and evaluate their physical spaces and available resources, and align that information with the institution’s aspirations, repositioning existing assets.

4. CLOSE: Aside from sometimes simply shutting down the entire institution, colleges and universities are closing underutilized and underperforming buildings or buildings that are simply past their prime. Closing these buildings reduces operating costs, energy consumption, possibly taxes, and reduces the deferred maintenance backlog.

5. DEMOLISH: Demolishing buildings essentially does what closing them does, but eliminates the eyesore of a closed building. However, it also leaves a hole in the campus fabric and in alumni memories. The campus fabric can be healed with judicious planning and design: the memories may need a good PR campaign.

7. REFINANCE: Changing the current economic forecast may include tactics that are drastic or measured, and that may include cutting faculty, cutting programs, lowering tuition, deleting some types of financial aid, refinancing long-term debt with tax-exempt bonds, and emergency fundraising.

8. SELL/LEASE: The physical campus is the heart of the institution, but it is also real property, with real value. While a property may be worth hundreds of millions, it may not be worth selling at any price. However, a piece of property may be of minimal importance to the character of the institution but significantly attractive to potential developers or third-party users.

9. PRIVATE PUBLIC PARTNERSHIPS (P3s): A college might explore partnerships with developers who are looking to develop student housing or mixed-use projects on university property. Through various formulations of ownership, a partnership between a college or university and a developer might allow the institution to benefit from the developer’s expertise while maintaining some level of ownership and control over the property.

10. COMMUNITY PARTNERSHIPS: Universities can leverage public-private partnerships to expand beyond the boundaries of the campus to relieve space constraints as well as facilitate collaboration with allied institutions. Many institutions are initiating partnerships and collaborations to improve students’ postgraduate outcomes, to create new academic disciplines and certification programs, to ensure the relevance and currency of existing programs, and to help local employers and communities thrive. These partnerships often entail technology support and can also help the institution implement advanced technologies.

In addition to unimagined institutional growth and fiscal security, the Merck partnership offers the Emmanuel community unique academic opportunities: Merck scientists from the Boston site teach the senior “Drug Discovery” seminar along with Emmanuel faculty, discuss research and the pharmaceutical industry, collaborate with the college on the Science Seminar Series and serve on the college’s Science Advisory Council. Emmanuel students are research interns at Merck and students majoring in biology, chemistry and biochemistry are eligible for Merck Scholarships.

The story of Emmanuel College is an inspired, early, mini-version — a tapping into — of a long-term trend of life science centers, clusters or ecosystems growing around the nation’s top research universities and large university hospitals. They respond to the demand for new and more advanced technologies from physicians, clinicians and the ever-growing population of patients who need them.

On a smaller scale, many institutions are initiating partnerships and collaborations to improve students’ postgraduate outcomes, to create new academic disciplines and certification programs, to ensure the relevance and currency of existing programs, and to help local employers and communities thrive. These partnerships often entail technology support and can also help the institution implement advanced technologies.

On a much larger scale, these centers consist of purpose-built lab space, startup ventures and access to world-class pharmaceutical, biotech, and medical device firms. They receive government (NIH) funding and venture capital financing and produce patents and jobs.
A top-tier life sciences cluster consists of a critical mass of resources — an institutional research core — that includes:

In Philadelphia alone there exists an active pipeline of 158 research institutions and drug development companies with 609 emerging drugs in development ranging from Discovery thru Phase III Clinical Trials.

Major players in the Philadelphia market include the University of Pennsylvania, Inovio Pharmaceuticals, Incyte Corporation, Integral Molecular and Drexel University: The five groups are responsible for 127 of the drugs currently in development.

Philadelphia is also home to Spark Therapeutics, founded by researchers from The Children’s Hospital of Philadelphia (CHOP), and launched in 2013 with a $50 million capital commitment from CHOP. Spark was the culmination of a decade-long commitment by CHOP and Spark’s founding team to drive the field of gene therapy to turn genes into medicines for patients with inherited diseases, including inherited retinal diseases (IRDs), liver-directed diseases such as hemophilia, and neurodegenerative diseases. Spark was recently acquired by Roche for $4.2 billion.

This acquisition and resulting expansion into more than 250,000 sq. ft. of HQ and lab space has created a regional anchor, around which a cluster of emerging drug development efforts will expand, growing uCity Square, Schuylkill Yards and the Pennovation Campus. 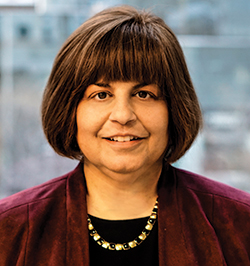 Joanne Pizzo is a co-founder of Planning Plus, a team of innovators in the field of higher education, facilities assessment, and real estate development, known for their expertise in academic leadership, finance and development. She has over 30 years of experience in architectural design specializing in educational facilities