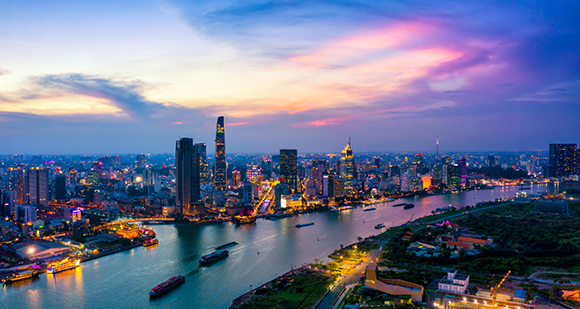 Vietnam’s rapid economic development is anchored on converting previously agricultural land for industrial and commercial use. The complexities of acquiring, consolidating and converting hundreds, if not thousands, of small plots (the average agricultural plot size is around 2,000 – 3,000 sq. m. [21,530 sq. ft. – 32,293 sq. ft.]) — some of which are owned privately and others by the government — into an industrial zone is a monumental task even for the most experienced developers with governmental support.

Despite such complexities, the expansion of industrial land is key to further industrial development. Vietnam has 369 registered industrial zones of which only 284 are in operation with the rest in some stage of development. The average industrial zone occupancy rate is about 70%. There are industrial zones all over Vietnam, but the largest concentration is in the Red River Delta centered on the capital city of Hanoi in the north and in the Southeast around Ho Chi Minh City. These two regions combined account for 54% of all industrial zones.

Zones are preferentially clustered in these regions because they possess attributes required for the successful operation of manufacturing and service businesses:

These attributes have led to surging demand for industrial real estate as companies seek low-cost suitable alternatives to China. While the Red River Delta and Southeast are home to the most zones, developers have not been able to keep up with demand, leading to an extraordinarily tight industrial real estate market. The average occupancy rate in the Red River Delta and Southeast is over 98%, driving up prices and constraining companies from finding an optimal location. This leads investors to short-list and negotiate with industrial zones in various stages of development, thereby creating risks and uncertainties — the very risks investors seek to mitigate by investing in industrial zones in the first place.

Short-listing an industrial zone under development presents investors with both opportunities as well as risks. New zones and those under construction provide an investor with greater choices on plot location, geometry, size and infrastructure, and utility access and availability. Along with this opportunity comes a significant amount of risk because of Vietnam’s highly complex land regulations.

The largest risk investors will face with zones under development is to project implementation schedule. All investment projects have schedule risks that must be mitigated, but these are largely within the investors’ control. Schedule risk is compounded when locating in a zone under development because of the regulatory uncertainties impacting their development schedule that nearly every industrial zone developer in Vietnam will encounter. Less professional developers may not be as forthright about the status of their land acquisition, necessitating additional time and expense for due diligence.

Completing the land acquisition for a zone typically takes two to three years if no significant issues are encountered in the process. Several developers have taken up to 10 years to complete this process. To manage cash flow, some developers purposefully acquire and convert land only when they have committed investors, a fact they may not reveal until after a formal commitment has been made and alternative locations have been eliminated, wasting valuable time. Other zones may have acquired rights to privately-owned plots within the approved zone boundaries, but government-owned plots may not have been acquired.

Vietnam’s legal environment is constantly changing. Major new laws regulating the acquisition of land for industrial use, as well as for construction of facilities, are typically revised once every five years and interim adjustments to implementing regulations are frequently issued. The recent promulgation of a new Law on Land by the Ministry of Natural Resources and the Environment (MONRE) has created such a conflict. Zones established when the old law was in effect were subject to one set of regulations guiding the acquisition of state managed land from the government. The new Law on Land has changed some of these guidelines. Zones in the process of acquiring government land under the old law, but which did not complete the acquisition, are finding they must restart the land acquisition process, thus significantly impacting their development schedules. Most industrial zones are cobbled together from hundreds if not thousands of small government-owned and privately owned land parcels zoned in multiple ways. Each type of land has its own rules for acquisition and conversion to industrial use. Changes in laws and regulations pertaining to one type of land may have an impact on an investors’ project schedule depending on its location within the zone.

As with any major business decision, it is critical to do detailed due diligence on each short-listed site. Confirmation of legal status, compliance with the compensation and clearance process and the zone’s development schedule are key to any site selection. This is particularly important if you need to select a site in a zone under development.

Even the most reputable and experienced developers encounter obstacles in acquiring land and completing zone infrastructure and utilities due to unforeseen difficulties and regulatory change. Culturally, developers are not familiar with foreign investors’ need for transparency and hesitate to share these obstacles. So, building a good relationship and maintaining consistent communication are key. The only thing that is certain in Vietnam is uncertainty, so be prepared to spend time and resources to understand and mitigate risks to your project schedule and other factors.

Dennis J. Meseroll is Executive Director of Tractus Asia, based in the Bangkok office. Tram Phan, Consulting Manager, and Ha Ngo, Analyst, are based in the Ho Chi Minh City office. Tractus has been assisting companies in making informed decisions about where to invest and how to expand their business in Asia and beyond for over 25 years. For more information, visit tractus-asia.com.