In Maryland, the time is right for drones. 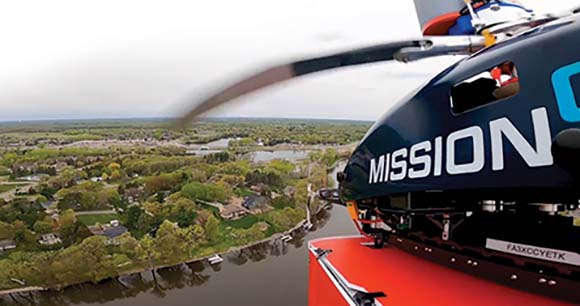 Shortly after midnight on April 19, 2019, the University of Maryland’s Matt Scassero found himself cruising in a Baltimore City police car, siren wailing, heart pounding. As the police vehicle pierced the darkness, a 44-year-old woman with a fading kidney was being prepped nearby for a transplant. Scassero, director of the university’s UAS (Unmanned Aerial System) Test Site, was tracking a drone he’d helped to develop as it whizzed the life-saving organ along a 2.8- mile path — at an altitude of some 300 feet —toward the University of Maryland Medical Center.

“If things went to hell in a handbasket,” Scassero relates, “the box containing the kidney was going to come down on a parachute. So, somebody needed to be there to get it, and that was me.”

As the world’s first such organ delivery — the culmination of two and a half years of meticulous planning — the moment was fraught to begin with, for when an organ for possible transplant becomes available, it needs to move quickly to surgery. But also consider that the recipient, a nursing assistant named Trina Glispy, had nearly maxed out on dialysis. Several donor kidneys, potential matches, had failed to pan out. Still, Glispy green-lighted the historic, if unorthodox, demonstration.

“She was getting toward the late stages, and the fact that she trusted us enough with this was just mind-bending,” says Scassero. “We kept that in mind as we were preparing to launch the aircraft. Wrapping your head around that really does help to focus on what the mission of the Test Site is, and that’s to create drones that serve people.”

Relating the story some two years later, Scassero admits to feeling a tingle in his spine.
“When that aircraft landed at the hospital,” he remembers, “I started breathing again.”

Formed in 2014 and housed inside an 11,000-sq.-ft. hangar at St. Mary’s County Regional Airport in southern Maryland, the UAS Test Site has evolved into the epicenter of an emerging drone industry spun out of Maryland’s enviable aerospace and defense sectors, which serve as the basis of a thriving innovation economy that includes leaders in cybersecurity, life sciences and advanced manufacturing.

The glue that holds it all together is an unrivaled workforce supported by such eminent learning institutions as Johns Hopkins University and the University of Maryland, and further distinguished by the presence of more than 50 top federal agencies and research labs, including the National Institutes of Health, the National Cancer Institute and the U.S.

“The resource that really counts for us is human capital, people smarts, and the ability to align as a team and to get stuff done,” says Scassero, who leads a permanent staff of close to a dozen aviators and engineers, plus University of Maryland interns. “Maryland,” he says, “has workforce in spades. We have a very high percentage of people holding advanced degrees. We have the federal labs and military bases, and we’re small enough that we can be in each other’s offices in a matter of hours.”

It’s for reasons such as those that the UAS industry, still in its infancy, is projected to create some 2,500 jobs and $2 billion in economic impact in Maryland by 2025. Nationwide, the industry is expected to generate more than $80 billion for the U.S. economy and 100,000 jobs over the next decade.

In addition to designing unmanned aircraft with the U.S. military, with major defense contractors and startups, and with federal agencies such as NASA and the National Oceanic and Atmospheric Administration, Scassero’s team is deeply involved in what stands as the biggest challenge of all, the establishment of federal guidelines to facilitate the day when thousands of drones might be airborne at any given moment. 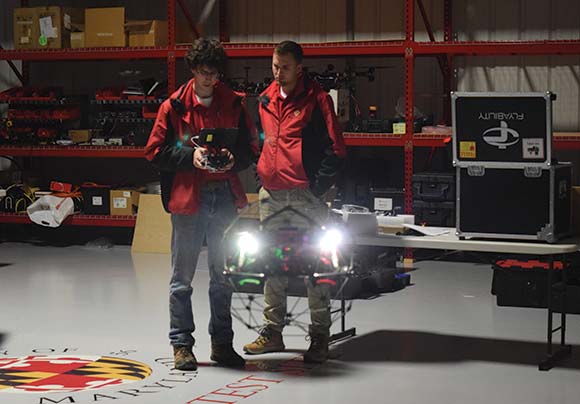 Having helped to write Maryland’s statewide UAS protocols, the Test Site is currently one of a handful of institutions working directly with the FAA to seamlessly integrate UAS into the national airspace. To that extent, the “next big project,” says Scassero, is the Chesapeake Unmanned Aircraft System Route Network (CURN), a UAS route network overlaying the Chesapeake Bay. The proposed network, the only such project in the nation, would enable unmanned aircraft to be flown safely within confined airspace that also includes conventional, piloted aircraft.

“The time is ripe,” says Scassero, “for major steps toward airspace integration.”

A former Navy combat pilot, Tony Pucciarella served at Naval Air Station Patuxent River in southern Maryland, another nexus of UAS research and development. Pucciarella is co-founder of MissionGO, a Baltimore-based drone development company that emerged from the Test Site’s original organ delivery project. MissionGO stands at the forefront of Maryland-based UAS development, along with up-and-comers such as Airgility, Vanilla Unmanned, AlarisPro and Aerial Response Solutions.

With kidney transplant recipient Trina Glispy today leading a fulfilling life, in May, MissionGO’s MG Velos 100, weighing about 50 lbs., flew a research pancreas on a 10-mile circuit that began and ended at Mercy Hospital in Coon Rapids, Minnesota.

“We did the flight with the pancreas because it has different characteristics than a kidney,” Pucciarella explains to Site Selection. “Post-flight biopsies,” he says, “showed that the pancreas remained perfectly transplantable.”

Like Scassero, Pucciarella and MissionGO are focused on developing drones that serve pressing human needs. Besides critical cargo delivery, the MG Velos 100 is designed primarily for infrastructure inspections and law enforcement functions. MissionGO, says Pucciarella, is “ramping up” toward a staff that will number in the dozens as it moves toward marketing the Velos 100.

“We expect FAA approval for it late this year or early next year,” he predicts. “And when that happens, we’ll enter full production.”