Steel is Back in Baltimore

A massive monopile plant is to feed the offshore wind industry. 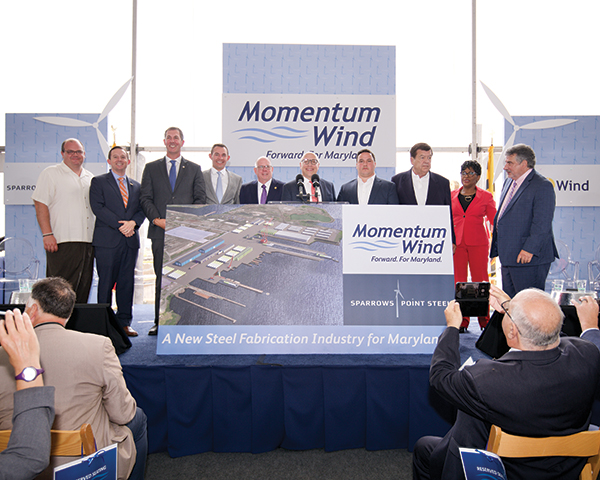 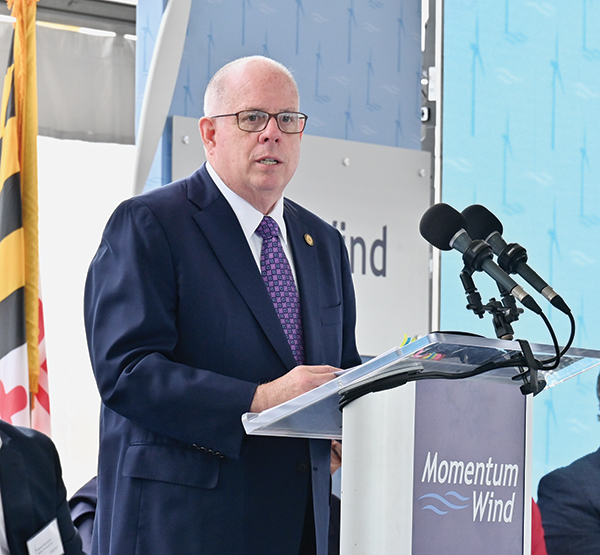 The story that has followed the long-lamented closure of Baltimore’s Bethlehem Steel Mill in 2012 just took a dramatic and surely welcome turn.

On the former grounds of the legendary factory that once employed up to 30,000 well-paid steelworkers has since risen Tradepoint Atlantic, a thriving logistics hub that opened in 2017. With Amazon, FedEx, Under Armour and Floor & Décor among its many tenants, Tradepoint Atlantic, in August, welcomed three new Home Depot distribution centers.
But that’s not the story.

Steel is the story, for steel production is returning to Sparrows Point, the 3,300-acre (1,335-hectare) peninsula upon which Tradepoint Atlantic continues to expand. On August 3, Baltimore-based US Wind, a renewable energy company, announced plans to build a massive steel mill for producing monopiles, the huge foundations that are sunk into the ocean floor to support wind turbines.

Sparrows Point Steel — on 90 acres (36 hectares) of portside property — is to provide those components for US Wind’s 22-turbine, 270-MW MarWin offshore wind project, which won state offshore renewable energy credits from Maryland regulators in 2017. The steel fabrication plant also is to support the 82-turbine Momentum Wind solar farm, unveiled simultaneously on August 3. Likely to emerge as one of the East Coast’s biggest offshore wind farms, the project would generate 1,200 MW of power, a nice down payment toward Maryland’s goal of getting 50% of its electricity from renewable sources by 2030.

Big picture, the deal plays into Baltimore’s favor in the nascent race to attract the multi-billion dollar investments — and the jobs that come with them — required to support a potentially massive new industry. Numerous coastal cities and communities are vying to be the commercial hub of a sector expected to generate not only power, but hundreds of billions of dollars.

“Developing Momentum Wind and Sparrows Point Steel at full capacity will give Maryland the opportunity to bring back steel to Baltimore and become the epicenter of offshore wind manufacturing,” said Jeff Grybowski, US Wind CEO, at a ceremony at Sparrows Point, also attended by Maryland Gov. Larry Hogan. 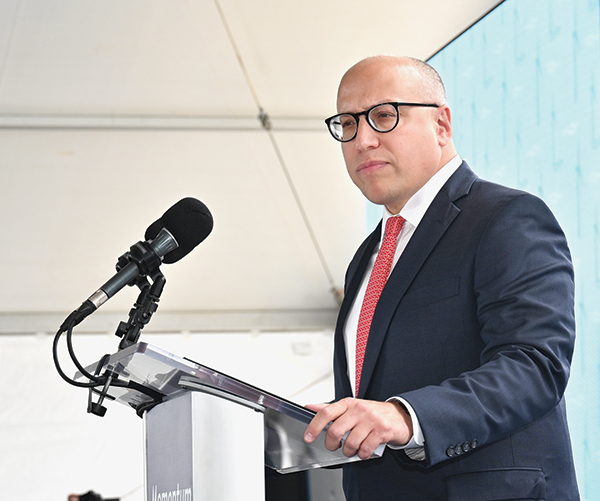 Offshore wind is poised to boom in the Mid-Atlantic, owing in large part to the Biden Administration’s climate-related commitment to stand up 30 GW of offshore wind capacity by 2030. The federal government envisions as many as 2,000 wind turbines spinning in the Atlantic. With a total of seven today — five off Rhode Island two off the coast of Virginia Beach, Virginia — things will need to move faster than they have up to now.

The deal involving Tradepoint Atlantic, US Wind and Sparrows Point Steel is contingent upon the companies’ making direct investments in port upgrades with an eye toward serving as a staging ground for construction and maintenance of coastal wind farms.

“Offshore wind presents a once-in-a-generation opportunity to expand and diversify our economy and our energy portfolio,” Hogan said. Calling the agreement “transformative” and “game-changing,” Hogan expressed confidence that “we will be a leader in offshore wind development for decades to come.”

Those manufacturing jobs could serve to burnish the profile of Tradepoint Atlantic, established with the help of significant public incentives, and scrutinized for facilitating warehouse jobs that might pay half of what former Bethlehem steelworkers made.

“We’re in the 21st century, and we are meeting the demands of the new economy,” said Aaron Tomarchio, Trademark Atlantic’s executive vice president for corporate affairs, in a Site Selection interview in May. “These jobs provide on-ramps for careers. They provide opportunities for folks and communities who typically have a hard time accessing jobs to be able to gain unemployment and start their career path. So, no, these are not the steelmaking jobs of the 20th century, but nor are they the warehouse jobs of 20 years ago. These are jobs interacting with artificial intelligence, much smarter and more complicated.”

Sparrows Point Steel is to be built by union workers under new labor agreements between US Wind and the United Steelworkers, Baltimore-D.C. Building & Construction Trades and the International Brotherhood of Electrical Workers Locals 126 and 313. Jim Strong, the steelworkers’ assistant director, considers Sparrows Point to be sacred ground, given its connection to the former Bethlehem behemoth.

“We’re thrilled,” Strong said, “to be part of US Wind’s visionary plans to bring steel back to Baltimore, back to this hallowed ground. US Wind is committed to supporting thousands of family-sustaining union jobs, and we couldn’t be happier to be partnering with them on this new venture. Our members,” Strong added, “are hardworking Marylanders. They have the skills, the training and the commitment to do great work for this exciting new industry.” 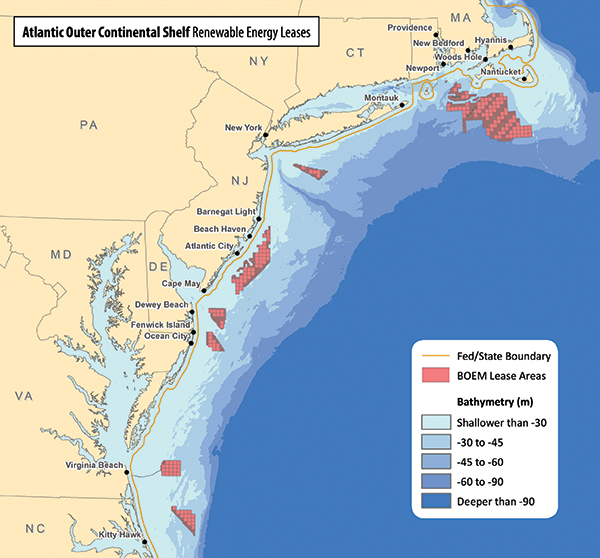 US Wind says the monopiles to be built at Sparrows Point Steel can weigh as much as 5.5 million pounds each, with full production expected to consume more than 220 million pounds of steel plate annually.

First Links of the Chain

The lease at Tradepoint Atlantic is the second of its kind, though far more extensive than that of Maryland’s other offshore wind developer, Ørsted, which locked in a 50-acre (20-hectare) lease in 2019. In fact, the site in Baltimore County, which, in addition to port access offers rail and access to major highways, has long been eyed by the offshore wind development community for its potential as a hub.

“We have available acreage with portside access, which is very important,” says Tomarchio. “We are an ideal location of offshore wind staging and supply chain support.”
With its vast, available acreage, Tradepoint Atlantic could accommodate the production of wind tower components that also include nacelles, towers and blades. The Momentum Wind project alone will create a significant demand.

Last fall, to give the Mid-Atlantic region a strong foothold in offshore wind development, the governors of Maryland, Virginia and North Carolina announced a three-state collaboration to advance offshore wind projects and to promote the region as a wind energy hub. Under the Southeast and Mid-Atlantic Regional Transformative Partnership for Offshore Wind Energy Resources (SMART-POWER), the three states are working together to develop and industry supply chains and workforce.

Even so, there remains within the region a spirited competition to lure offshore wind industry players. Officials at the Port of Virginia, in Virginia Beach, point out that even if Tradepoint Atlantic can offer more space, their port facility rests where Chesapeake Bay meets the Atlantic, not several hours inland as is the case with Tradepoint.

Some 30 nautical miles from the largest unfolding wind installation off the East Coast — a 180-turbine project by Dominion Energy — the 270-acre (110-hectare) Portsmouth Marine Terminal is undergoing tens of millions of dollars of upgrades to service offshore wind manufacturing, handling and transportation.

On August 25, Virginia Gov. Ralph Northam announced that Dominion and the Port of Virginia had reached an agreement allowing Dominion to lease 72 acres (30 hectares) at the Portsmouth terminal as a staging and pre-assembly area to support offshore wind-related manufacturing. The lease term is 10 years, valued at nearly $4.4 million annually, and has an option for two five-year renewals.

“This announcement,” Northam said in a statement, “is yet another milestone toward making Virginia the national leader in offshore wind power. The Commonwealth and Dominion Energy are standing together to promote clean energy, reduce carbon emissions, create jobs and build a new American industry on the East Coast of the United States.”

“The location at the Port of Virginia is second to none,” said Dominion president and CEO Robert M. Blue. “It has deepwater access, no overhead restrictions, a strong, experienced maritime workforce and sufficient space for these large wind infrastructure components. It is perfectly situated to serve the Virginia offshore wind project and grow the domestic supply chain needed to complete other offshore wind projects in the United States.”

With a two-turbine test project in federal waters off the coast of Virginia Beach delivering power to the grid since January, Dominion’s 2,640-MW Coastal Virginia Offshore Wind Project (CVOW) is expected to launch construction in 2024, with completion targeted for late 2026. Once fully built, the project is expected to power 660,000 homes with clean, sustainable electricity, representing a major step toward Virginia’s goal of becoming carbon-free by 2045. The offshore wind farm is to create about 900 jobs and $143 million in economic impact during construction and 1,100 jobs and nearly $210 million in annual economic impact afterward.

In July, Dominion announced it had cleared a major hurdle in a federal regulatory process that, under the Trump administration, had been criticized as glacially slow. The utility’s receipt of a Notice of Intent from the federal Bureau of Ocean Energy Management for the CVOW project triggers the Bureau’s review of the project, which includes the preparation of an Environmental Impact Statement.

The issuance of the NOI, says Dominion Spokesman Jeremy Slaton, “keeps us on schedule to start construction in 2024 so we can deliver clean, renewable energy to hundreds of thousands of Virginia homes.”

New Jobs Fund for the District

With the COVID-19 pandemic having served to empty out intown offices across the country, the Washington, D.C. government has joined the ranks of those now offering millions of dollars to attract new office tenants. In June, D.C. Mayor Muriel Bowser unveiled details of a $30 million Employment Center Vitality and Job Creation fund aimed at luring “high impact employers” to the District and creating some 3,000 jobs in the process.

Commercial real estate company Avison Young, in a June 23 analysis, called the initiative “a step in the right direction” for the District, but questioned its ability to affect “meaningful change in office fundamentals.” AY noted that, at 250 sq. ft. (23 sq. m.) per employee, the 3,000 new office jobs would generate 750,000 sq. ft. (70,000 sq. m.) of office occupancy, 20% of what the market has lost since the end of 2019. With office landlords having been forced to grant increasingly large sweeteners to attract new tenants, AY estimated that 750,000 sq. ft. of new leasing could trigger $136.6 million worth of concessions — more than four times the amount set aside for the incentive fund. 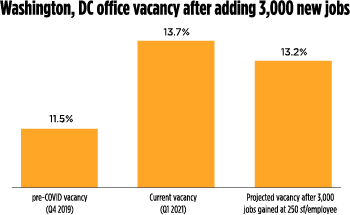 “It is exciting,” wrote AY, “to see the mayor’s office take steps to actively recruit office tenants to the District. However, several hundred tenants will be up for expiration annually over the next several years, each reevaluating their office needs after more than a year of working largely from home. Keeping these tenants in the District, or in an office at all, will likely take more than what this incentive fund will be able to offer.”

Other proposed investments touted by Bowser to bolster job creation and workforce development in the District include: 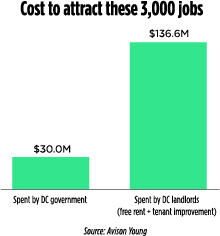 Bowser’s proposed programs would fund 333 apprenticeships for youth and adults, including apprenticeships within D.C. government, and would subsidize jobs for 1,825 residents who have barriers to employment. They would also expand the D.C.

“We’re not just investing in jobs,” said Bowser. “We’re investing in the people who want to fill those jobs and the residents whose lives and livelihoods were disproportionately impacted by this pandemic. We want the D.C. workforce to be ready to take new jobs that will be career builders.”