The County Hardwired for Capital Investment 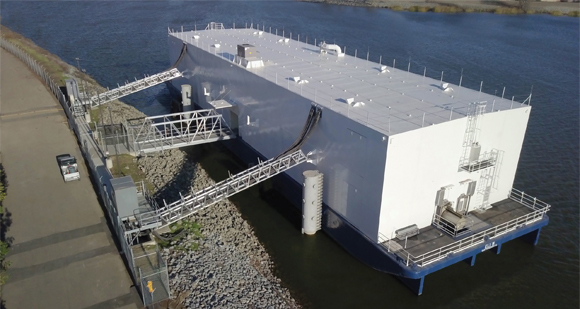 San Joaquin County has long had a compelling case for attracting corporate investment. Easy access to the San Francisco and Sacramento metros, lower housing costs than in the Bay Area and infrastructure that includes the deepwater inland Port of Stockton are highlights. Look closer, and another infrastructure comes into focus that makes the county’s value proposition even more attractive. IT initiatives are under way in locations around San Joaquin County that are adding significantly to its arsenal of business advantages.

One is in plain view at the Port of Stockton, where Nautilus Data Technologies recently opened a 7-megawatt data center that’s situated on the San Joaquin River. Among other innovations, it uses river water for equipment cooling rather than draining potable water from the region’s supply. The company added a fiber line to ensure redundancy for its customers, and other businesses will benefit from that investment as well.

“All the internet traffic from Silicon Valley comes through Stockton,” says Chad Romine, co-founder and vice president of business development. “That makes for great fiber connectivity in Stockton and the Central Valley. Being closer to Silicon Valley than Sacramento, where many data centers are, we can offer lower latency — the time it takes data to travel.”

The data center serves a federal agency, the City of Stockton, a Fortune 100 company and other clients, says Romine. Others are more than interested thanks in part to Nautilus’ proprietary river-water cooling technology. “We’ve had every large company you can think of, from CIOs on down, come tour the data center, which is great exposure for San Joaquin. And really,” he adds, “the ball is in their court now. We’re the plumbing. You can have all the best software and visions of autonomous cars and smart grids. But if you don’t have the plumbing, which is the data center, all of that is useless.”

“Silicon Valley has long been an excellent location for software development,” says Ken Davies, chief strategy officer at Birch Infrastructure PBLLC, which develops, structures, owns and operates utility infrastructure. “Unfortunately, the same can’t be said for the data center infrastructure needed to power said software. For years, technology companies developed data centers in Silicon Valley because it was the easy answer. The easy answer, however, is rarely the right answer and after two decades of follow the leader, data centers are reaching the limits of growth in Silicon Valley.

Broadband is critical because it aids our ability to attract new businesses and retain existing ones.”
— Yvette Davis, Senior Program Specialist, San Joaquin Council of Governments

“As a company built by veterans from data center site selection, network and energy teams,” Davies continues, “Birch identified the optimal data center location in Northern California where the industry has a second chance to get it right. The obvious choices were locations in San Joaquin County based on the infrastructure in place and the region’s support for IT industry growth. Forward-thinking companies have broken from the herd to sites in San Joaquin County to plant a flag — we expect others to follow suit.”

How to Add More Fiber

Meanwhile, the San Joaquin Council of Governments is working on a fiber readiness plan municipalities can use as they anticipate such transportation challenges as congestion and changing commuting patterns. The Council is the planning, financing and coordinating agency for the San Joaquin region overseeing transportation, housing and habitat conservation.

“Even before the COVID-19 pandemic, the San Joaquin region faced heavy congestion as more and more people made the San Joaquin Valley their homes and commuted over the Altamont Pass to Bay Area jobs,” explains a blog posted on the Council’s website.

A work in progress, the plan is designed to “provide information that will better guide our jurisdictions in making policy and process adjustments to streamline installation of fiber,” says Travis Yokoyama, senior regional planner. “It would identify potential high-impact areas that could see the most benefit from it. It will identify gaps where broadband is most needed.” The plan is one of the first in the state to get under way, he notes. “It’s about being as innovative as we can be so we can build the infrastructure necessary for businesses and support economic development,” adds Yvette Davis, senior program specialist. “Broadband is critical because it aids our ability to attract new businesses and retain existing ones.”

Lodi is one city investing in its IT infrastructure. Astrida Trupovnieks, Lodi’s economic development manager, explains: “The city is in the first phase of rebuilding its fiber-optic backbone based upon the results of a broadband feasibility study. This will be followed by building a new feeder and distribution network to business and residents in partnership with a broadband service provider. A citywide buildout at an estimated cost of over $38 million is being planned. Once completed, the city’s business corridor, including the Lodi Industrial Park, will be fiber-ready.”

Broadband is the next frontier of economic development, according to Michael Nimon, economic development manager for the City of Tracy. “Companies coming here are tech at heart — most every company is a tech company in part,” he relates. “We have some broadband the city is working on, but in Tracy we have the International Park of Commerce with 1,800 acres. It’s the largest holding in Prologis’ global portfolio. They have been very active in bringing world-class technology to the park. They have attracted a lot of high-end tenants because of broadband.”

Tracy is also focusing business-attraction efforts on cleantech companies, such as Energy Recovery, Inc., that is building a water desalination pilot facility in the city. Tracy owns a 100-acre site that soon will be entitled with cleantech investment in mind, and incentives for such projects already are in place. “We’re an hour away from Silicon Valley, where most tech innovation has come from,” says Nimon. “We are in reach of their focusing on cleantech, where we think we have a competitive advantage, having some of that on the ground already.”