‘Up with the Sun, Gone with the Wind’

Consumers Energy and Michigan communities leave coal behind on the road to a net-zero future. 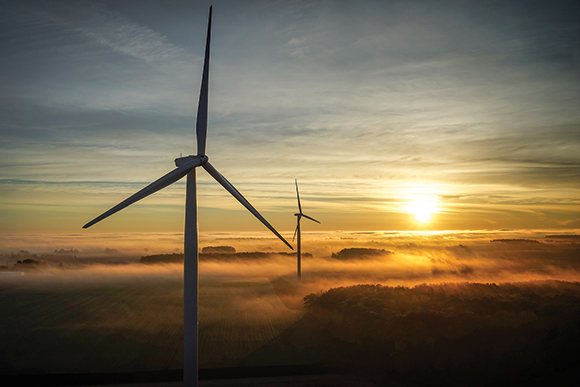 Cross Winds Energy Park in Tuscola County has been generating power for Consumers Energy’s millions of customers since 2014.
Photos courtesy of Consumers Energy
by ADAM BRUNS

Like an elite athlete who somehow finds another level, Consumers Energy in June 2021 found a higher place to soar with its sustainability commitment. Instead of eliminating coal as a fuel source by 2040 as originally planned, the company will stop by 2025.

“We are proud to lead Michigan’s clean energy transformation and be one of the first utilities in the country to end coal use,” said Consumers Energy President and CEO Garrick Rochow.

The utility is pledging to generate power with 90% clean energy resources and to construct nearly 8,000 megawatts of solar energy by 2040, as it aims to save residential and business customers about $650 million and achieve its goal of net zero carbon emissions.
The road to electric mobility will run in parallel, as Consumers invests in charging infrastructure and promotes electric vehicle use from fleets to family garages.

Clean-tech and renewables play a strong part in the state’s economic development. Clean energy companies employed 113,456 Michiganders at the end of 2020, reports Clean Energy Midwest. The state accounts for nearly one-fifth of clean energy jobs across a 12-state swath of the Midwest. Electric and hybrid vehicles (accounting for 24,268 jobs) are doing their fair share.

“Through the strength of our partnerships with key service providers like Consumers Energy, Michigan remains laser-focused on ensuring we drive innovation in mobility and electrification in a way that protects the public health and the environment,” says Quentin L. Messer, Jr., CEO of the Michigan Economic Development Corporation.

The Cadillac of Solar Plants

The ramp-up already has begun, including new solar power plants at Western Michigan University, Grand Valley State University and in Cadillac, situated between the third finger and pinkie finger well north on the Michigan “mitten.” It sits at the juncture of several highways, between two lakes, and at the intersection of brownfield redevelopment and renewable energy.

The Cadillac Solar Gardens, opened in July, is a “Brownfield to Brightfield” project that repurposes a former Mitchell-Bentley automotive manufacturing site that dates to the late 1800s and had been vacant for more than 30 years.

Consumers Energy customers enrolled in Solar Gardens pay as little as $10 a month to support solar projects and receive bill credits based on electricity that’s generated. Local companies have already signed up to offtake power from the site. The utility’s Clean Energy Plan calls for 1,100 megawatts of utility-scale solar to come online between 2022 and 2024.

Marcus A. Peccia, Cadillac’s city manager, says the way the project came together “redefines what people can do to work for the common good.” A breakthrough came when the city, in collaboration with the Cadillac Industrial Fund and through assistance from Wolverine Power Cooperative, was able get a major lien released by the MDEQ (now EGLE), which made the property more attractive for future redevelopment opportunities. The arrival of Consumers Energy as a private investor helped trigger $1 million in brownfield grant and loan support from the state.

Collaboration has been the hallmark for a number of successful projects in the city, he says, including a public area called Cadillac Commons, the Cadillac Lofts mixed-use development and the forthcoming trailhead in the central business district for the 100-mile White Pine Trail that goes all the way to Comstock Park in Grand Rapids.

Now that same spirit will be brought to the prospect of redeveloping other parcels at the former Mitchell-Bentley site.

“Getting this site cleaned up and active again is a benefit to all involved,” Peccia says. “The city has had a great working relationship with Consumers Energy.”

The utility is rolling out 200 fast-charging stations (and over 2,000 at homes and businesses) by 2024, and in June debuted its PowerMIFleet program, which offers participating companies expertise and $3 million in rebates for charging locations throughout the state. Early this year, a coalition of Midwest energy providers including Consumers Energy that committed to long-range EV charging expanded to 10 companies. EV drivers now will have a fast-charging network along the 1,300-mile drive from Mackinac City to the Colorado border.

Jeff Myrom, Consumers Energy’s director of Renewable Energy and Electric Vehicle Customer Products, recently appeared in an episode of the popular PBS Michigan show “Under the Radar Michigan.” Host Tom Daldin, his substantial mustache and his even more substantial cache of corny jokes visited developing downtowns across the state while driving a Chevy Bolt EV he named “Steve.” The Bolt has a range of more than 250 miles, and Consumers Energy supports EV use with $500 rebates for customers installing fast-charging stations.

One of the places Daldin stopped was Marshall, which he described as Norman Rockwell come to life. Historic preservation is the community’s calling card. But the future is top of mind.

“Choose Marshall has been working closely with Consumers Energy and MEDC to develop our 1,600-acre Energy Ready Marshall Mega Site,” says Choose Marshall CEO Jim Durian. “We are currently working together on a strategic site plan, preparing infrastructure for the site and focusing on attracting electric vehicle manufacturing to the site. We also are working with Consumers on a variety of projects that are in development, which include large solar farms in Marshall Township, additional opportunities for car charging stations and investments in downtown development, including attractive lighting and placemaking.”

As Daldin conveyed himself from town to town, he missed no opportunity to mention the convenient charging stations all the way up to Cheboygan.

“Try on a smaller pair of carbon shoes,” Daldin said, “and take your next adventure in your own Steve the EV. It’s better for you, better for me, and for all the generations yet to be.”
In his own rhymey way, Daldin was echoing the sentiments of MEDC CEO Quentin L Messer, Jr.

“Transitioning to carbon neutrality will allow Michigan to take full advantage of the ongoing global energy transformation,” says Messer, “leave our children and grandchildren with a cleaner, safer and healthier world, and make Michigan a more competitive and attractive business location for generations to come.”

This Investment Profile was prepared under the auspices of Consumers Energy. For more information, contact Valerie Christofferson at 616-648-2777 or valerie.christofferson@cmsenergy.com. On the web, go to www.ConsumersEnergy.com/econdev. 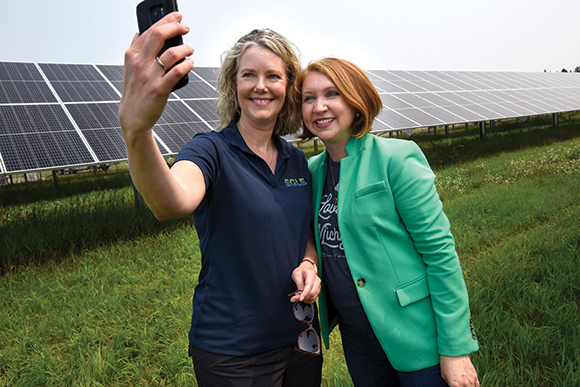