Cutting-edge research out of Abilene, Texas, is poised to change the world for the better. 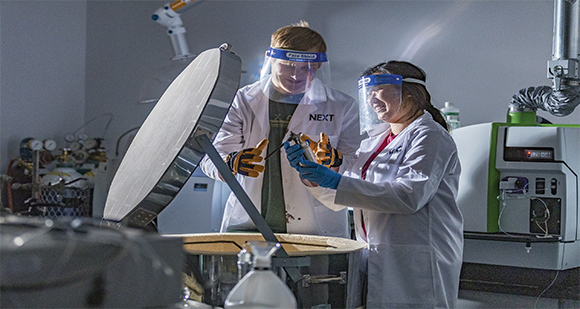 Undergraduate students at Abilene Christian University research nuclear energy in the NEXT Lab.
Photos by Jeremy Enlow
by SAVANNAH KING

When we talk about the future, we like to imagine a world with easy access to clean water, abundant energy and life-saving health care technologies. While the rest of the world continues to imagine the possibilities, research currently being done in the west Texas city of Abilene is already creating just such a future.

Founded in 2016, the Nuclear Energy eXperimental Testing (NEXT) Lab at Abilene Christian University (ACU) is working to find solutions to the world’s most pressing needs — for clean energy, pure water and medical isotopes — by advancing the technology of molten salt reactors.

The research is unique because it uses molten salt rather than water to cool nuclear reactors. Boiling water at high temperatures — like those found inside reactors — can pose significant cost and safety concerns as pressure rises. On the other hand, salt melts at a much higher temperature to become a liquid more ideally suited to transfer heat and cool reactors.

“This project and the other renewable energy projects happening here in Abilene showcase our area’s highly sought-after intellectual capital,” said Misty Mayo, President and CEO of the Development Corporation of Abilene (DCOA). “This research is going to continue building on our area’s strengths and create new opportunities for Abilene.”

Earlier this year the lab installed its second molten salt test loop and has formalized plans for a third, larger molten salt test system. In July, DCOA assisted NEXT Lab in its efforts to expand its research and development facility at the former Taylor Elementary School site in Abilene. A $2.93 million incentive package from DCOA will support the lab as it expands into and improves the former school building and builds a new Science and Engineering Research Center. The lab’s expansion plans will retain 28 jobs and create an additional 37 jobs, including 13 projected student positions.

Andrew Harmon, director of commercialization and development of NEXT Lab at ACU, explains the support and encouragement from the Abilene community is what has allowed this cutting-edge research to come to life — incidentally, it’s also an ideal place to do the work.

“Beyond ACU, Abilene has been a great place for this research to take place,” Harmon says. “We have the oil and gas industry being prominent in the region and we have a significant amount of abilities in engineering and welding construction. Those are capabilities that we’ll be using in different ways in our goals as we build our test systems down to building the nuclear reactor. That’s a critical piece that’s been very helpful to us.
“There is an entrepreneurial spirit around Abilene and the greater area,” he says, “that led to the support that got the NEXT Lab started.”

One of the largest private institutions in the Southwest, ACU is leading a consortium with other research institutions including Georgia Institute of Technology, Texas A&M University and the University of Texas at Austin, as they work to design, license and commission a molten salt–fueled research reactor on ACU’s campus. The consortium, called the Nuclear Energy eXperimental Testing Research Alliance (NEXTRA), will advance this world-changing technology and educate the next generation of nuclear scientists and engineers.

Harmon says most people, when they hear about the research taking place at the university, say, “It’s too good to be true.” While it may seem that way, the technology has been around for decades. The first molten salt reactor experiment at Oak Ridge National Laboratory in Tennessee was abandoned in 1969 in favor of pressurized water reactors.

The promising research was canceled for a host of non-scientific reasons, including development time, political, military and commercial concerns — namely the availability of plutonium, a key weapons material. However, more than 50 years later, a series of chain reactions have brought this promising technology back to the forefront of nuclear research.

“We expect this to bring highly technical, high paying jobs to the Abilene area,” Harmon says. “If we’re successful, ultimately, it won’t stop there. It won’t be 50 years until the next reactor is built. Hopefully, this reactor will be the starting point for many other molten salt reactors to be built in the future and in turn, provide safe, clean energy to the world, clean water, and increased health care through access to medical isotopes.” 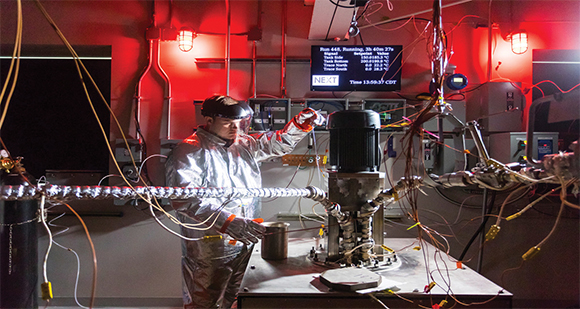 NEXT Lab’s mission gained significant momentum when it hired its first full-time staff member in 2018, thanks to a $300,000 award from the DCOA. A few months later, the Robison Excelsior Foundation contributed $3.2 million to the lab and salt flowed through a molten salt test loop for the first time. By 2019, NEXTRA and the research at ACU had the attention and support of the U.S. Department of Energy, which has awarded the lab two research and development grants.

The biggest shot in the arm for NEXT Lab occurred in 2020 when Abilene-based Natura Resources announced funding of $30.5 million to NEXTRA. Natura will provide $21.5 million to ACU over the next three years and represents the university’s largest sponsored research agreement in its history. The other NEXTRA universities will receive $9 million of the overall agreement.

“We are excited to sponsor this remarkable interdisciplinary research alliance of talented faculty, staff and students to support our vision of developing advanced energy systems that are inherently safe, sustainable and environmentally friendly,” said Doug Robison, founder of Natura.