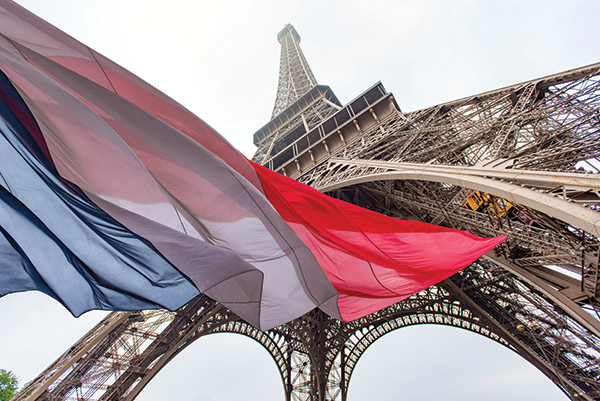 In the face of adversity, Europe has demonstrated impressive resilience in attracting foreign direct investment (FDI). As FDI flows plummeted worldwide with the onset of the COVID-19 pandemic, the countries of Europe collectively recorded 5,578 FDI projects in 2020, a 13% drop from 2019, according to EY’s 2021 Attractiveness Barometer, published over the summer. That compares with a worldwide drop in FDI of 42%, as reported by the United Nations Conference on Trade and Development (UNCTAD).

Europe’s top three recipients of FDI didn’t change, although third-ranked Germany (930 project announcements) and the second-ranked United Kingdom (975 announcements) closed the previous year’s gap with top-ranked France (985 project announcements).
Combined, those top three garnered 53% of the continent’s FDI projects, “reflecting,” says EY, “the safe haven effect that these leading countries can have in the eyes of investors in times of crisis.”

Based on a panel of 550 international decision-makers, field research conducted for the study in March and April of 2021 found that French implementation of France Relance, the country’s pandemic recovery plan, served to bolster the country’s attractiveness among foreign investors, 44% of whom ranked the plan as superior to those adopted by other European governments. (The French verb relancer means to revive or restart.) 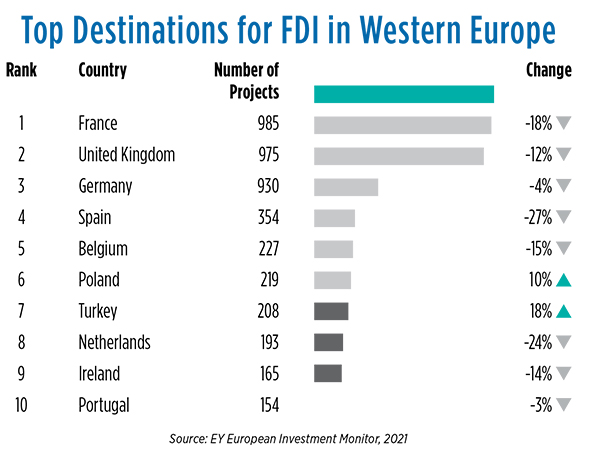 In addition, French President Emmanuel Macron has championed reforms to make France more competitive since assuming office in 2017. Those steps have included labor reforms, corporate tax cuts, extending the country’s research tax credit and simplifying procedures for foreign investment. Thus, France led Europe in the EY study with 341 manufacturing and industrial projects, far outpacing Turkey (153) and the United Kingdom (112) and besting the U.K and Germany to lead in the installation of R&D centers (115).

“Ecolab has a long-lasting and widespread presence in France, and this investment shows that its confidence in the French economy remains very high,” said French Minister for Foreign Trade and Economic Attractiveness Franck Riester. “International investors trust in France because our pro-business agenda remains clear. The ‘France Relance’ recovery plan supports this strategy.”

Johnson seized the occasion to announce foreign investments totaling $13.4 billion (£9.7 billion) in green energy projects, an area upon which he staked the UK’s economic future. The green energy deals, says the government, will create at least 30,000 jobs and drive funding for targeted sectors including hydrogen energy, sustainable housing and carbon capture and storage.

“There is a force out there that is stronger than government, stronger even than business, and that force is consumer choice,” Johnson told the conference. “That force is the market, and the market is going green.”

In the runup to the conference, London’s Evening Standard opined, “France has lured investors under modernizer Emmanuel Macron. Britain needs to catch up.” The newspaper tweaked “Global Britain,” Johnson’s post-Brexit recovery plan, as “much talked about, but little defined.”

During the conference, the Johnson government unveiled its Investment Atlas, an online platform designed to help international investors identify and execute high-priority investment opportunities within the UK. The Atlas offers an initial 53 strategic opportunities, each with a strong sustainability element, including offshore wind projects in Scotland and manufacturing ports in the northeast of England.