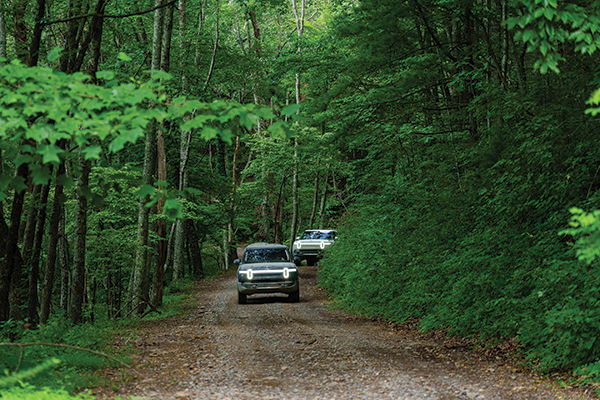 It wasn’t exactly planes, trains and automobiles, but it was close.

A helicopter ride, a fast-moving pickup truck and a rail line all served as difference-makers in delivering the single largest economic development project in Georgia history.

A year-long national site search ended on December 16 when Illinois-based Rivian Inc. announced that it would invest $5 billion to build an electric vehicle assembly plant on a 2,000-acre site about 45 miles east of Atlanta. Gov. Brian Kemp joined company leaders in announcing the project that will create an estimated 7,500 jobs at the East Atlanta Megasite called Stanton Springs North.

“We are so proud that Georgia will now be home to Rivian’s largest manufacturing facility,” said Gov. Kemp. “This single investment — the largest in state history — represents the future of automotive manufacturing and establishes the leading role the Peach State will play in this booming industry for generations to come.”

The Georgia facility will be capable of producing up to 400,000 vehicles a year, according to a Rivian press release. Construction is set to being in summer 2022, and the start of production is scheduled for 2024.

“We’re happy to partner with Georgia on our new manufacturing site, which will build our next generation of products that are important for scaling our business,” said Helen Russell, chief people officer for Rivian. “Our work together is driven by a compelling purpose and rooted in building a highly collaborative environment that creates a true sense of belonging. We’re excited for Georgians to bring their creativity and ideas to Rivian. We’re confident that, alongside Illinois, Georgia is the place for Rivian to continue to scale and thrive.”

Pat Wilson, commissioner of the Georgia Department of Economic Development, pulled back the curtain on the deal-making process as he shared the pivotal moments that took place during the year-long talks between Rivian and Georgia.

"We just checked more of their boxes. The site itself and speed to market were difference-makers as they really fell in love with this site.”
– Pat Wilson, Commissioner, Georgia Department of Economic Development

“It was a make-or-break moment,” Wilson says of when Gov. Kemp met on site with Rivian founder and CEO R.J. Scaringe to discuss the deal. “He [the governor] helicoptered in. R.J. was in a truck. They went for a ride, and they came back. Both CEOs knew this was the right place to be. I had the pleasure of sitting in the back seat while they were talking. That is a fast vehicle.”

The high-powered electric pickup truck won over Kemp, and Georgia won over Rivian. Site considerations included logistics, environmental impact, renewable energy production, availability and quality of talent, and overall fit with Rivian culture, the company said. The firm also wanted the plant to be within 100 miles of an international airport.

The firm’s existing plant in Normal, Illinois, was recently approved for its own 623,000-sq.-ft. expansion. That will bring the total footprint of the Normal plant to about 4 million sq. ft., with additional plans to expand warehouse, storage and production capacity onsite. “Rivian’s hiring in Normal is scaling rapidly,” the company said, “with plans to hire an additional 800 to 1,000 employees in Normal by the second quarter of 2022.”

Another transportation asset played a key role in Rivian choosing Georgia, notes Wilson. “A CSX rail line touches the northern end of the site,” he adds. “It is an interesting location on Interstate 20 frontage just north of the highway. Takeda Pharmaceuticals is located just south of I-20, along with a massive Facebook data center complex. Stanton Spring North is mostly a mix of farm fields and timber tract. It is a beautiful area.”

Many suitors lined up to court Rivian. Wilson says a short list of nine states got whittled down to three, “and then we were out. We worked our way back into the top four before they narrowed it down again. At the end of the day, we just checked more of their boxes. The site itself and speed to market were difference-makers as they really fell in love with this site.”

Wilson says incentives played an important part in the deal, but he adds that they were not the most important factor. “The bulk of our incentives are statutory,” he says. “They’re the same as what Delta or any other company would receive. We have a small amount of discretionary incentives. We focus on, ‘What can we do to help the company reach its goals faster?’ ”

The city providing services is Social Circle. The site is also near Madison, Covington and Rutledge. “We’ll build a Quick Start training center on site to help them,” says Wilson. “We’re in the final stages of working through the documents with attorneys. We’re plowing ahead and getting ready to tackle this massive project. They have an aggressive timeline.”
Just before the big announcement, MotorTrend gave its 2022 Truck of the Year Award to the Rivian R1T all-electric truck and called it “the most remarkable pickup truck we’ve ever driven.” 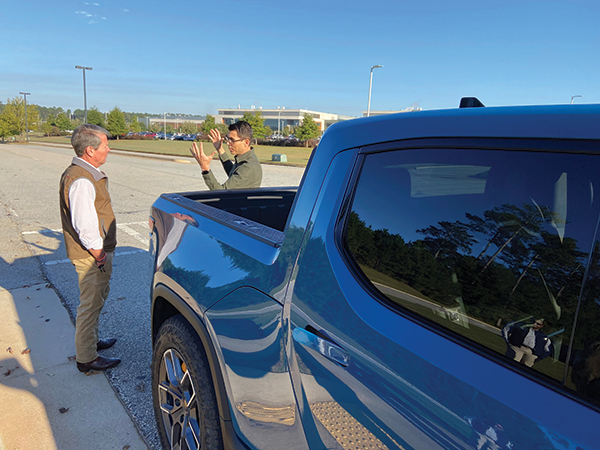