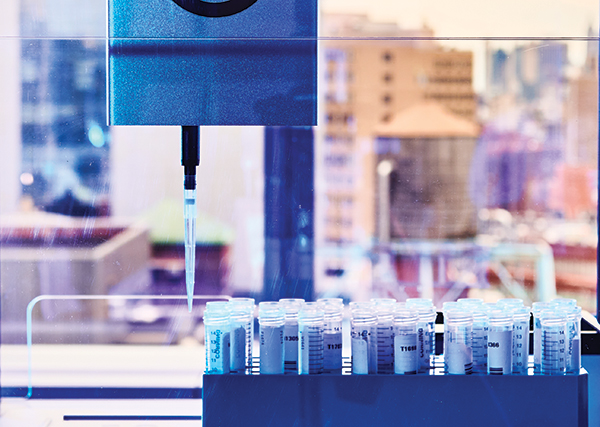 In its fight against the coronavirus, New York City has built for itself a unique advantage. A small army of robots, developed locally and backed by significant City funding, is helping to carry out thousands of COVID-19 tests daily, a crucial front in the ongoing battle against the pandemic.

Created in the summer of 2020, the Pandemic Response Lab (PRL) is a unit of Opentrons, a robotics firm that sprang from the Brooklyn incubator Genspace in 2013. The effort to launch the lab was facilitated by New York City Economic Development Corporation (NYCEDC), in conjunction with Opentrons, and utilized technology licensed from the academic medical center NYU Langone Health.

“PRL,” says Opentrons CEO Jonathan Brennan-Badal, a graduate of New York’s Columbia University, “is a great example of public-private partnership. City Hall did what they are best at, which was to enable us to work with some of the major hospital systems and other important entities in the New York healthcare system. And we, as a company, focused on what we’re really great at, which is automation expertise and building a great lab.”

None of this occurred by happenstance. Based on copious research into the City’s abundant assets, New York made the decision in 2016 to target life sciences as a sector for growth, beginning with a $500 million commitment that has since more than doubled.

Branded as LifeSci NYC, the initiative has yielded impressive inroads. Unleashed by the City’s backing, New York’s deep pool of talent, its network of premier academic medical institutions and unparalleled access to capital have combined to foster a thriving center of life sciences innovation. All in a New York minute.

“What is clear,” says John Isaacs, executive vice president of Global Advisory & Transaction Services for commercial real estate and investment firm CBRE, “is that in the past three to four years there’s a tremendous amount more venture capital money, private money and public money coming to New York City’s life sciences space. We’ve got the product, we’ve got the incubators, we’ve got the talent and we have the financing. The momentum is clearly there.”

It begins with growing wet lab space, which the City has fostered through financial incentives and tweaks to zoning ordinances that have opened more of New York to lab development.

“If you think about the research that comes out of the great academic institutions, whether it be Columbia or NYU, Rockefeller University or SUNY or CUNY, it needs wet lab spaces to go and to actually grow,” says Sue Rosenthal, NYCEDC’s senior vice president for life sciences and healthcare initiatives. “So, a fundamental part of our initiative is to help developers to put those wet lab spaces into place.”

The results have been remarkable.

The wave of new development is being led by major players in the life sciences space. Innolabs, home of Opentrons in up-and-coming Long Island City, is a project of Boston-based King Street Properties. Deerfield Management recently opened CURE, which offers 300,000 sq. ft. (27,870 sq. m.) of lab space in the Flatiron District of southern Manhattan.

Taconic Partners is leading the redevelopment of 125 West End Avenue, a 400,000-sq.-ft. (37,160-sq.-m.) former Chrysler facility reimagined as a life sciences hub. BioBAT, in which NYCEDC is a partner, is expanding lab space as part of a $50 million expansion at the Brooklyn Army Terminal. And recent to West Harlem is the Taystee Lab Building, a life sciences project of Manhattan’s Janus Property Co.

Volastra, an early-stage cancer treatment venture, recently moved to West Harlem’s newly-renovated Mink Building. The company got its start in 2019 at JLABS, an incubator in Lower Manhattan and a joint initiative of Johnson & Johnson Innovation, New York State and the New York Genome Center. Incubator space is an increasingly crucial factor in nurturing the City’s expanding roster of life sciences startups. 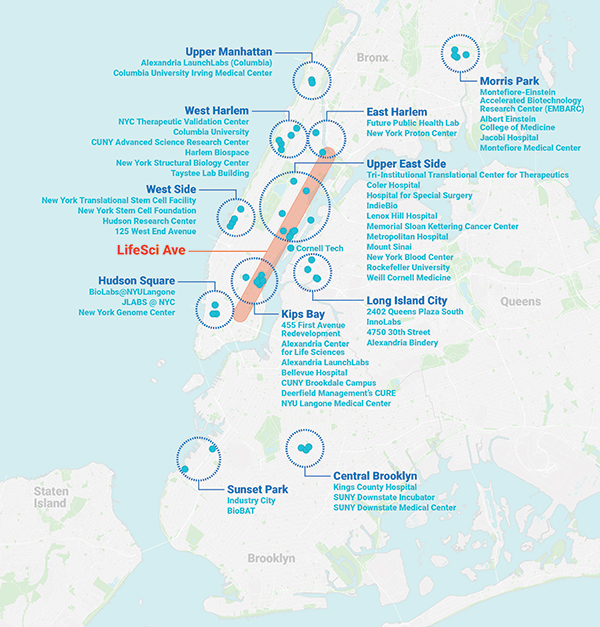 “What drew us to JLABS,” says Volastra Vice President Diane Tager, “was the fact that their whole goal and objective is to help companies like ours to grow and get them out. They were very helpful in connecting us to key people within the biotech world in New York City, and as a result, we ended up moving into our own space a lot sooner than expected.”

Talent Is the Driver

As with New York City’s world-leading finance, media and real estate sectors, the secret sauce remains talent. “What has driven us to success,” says Opentrons CEO Brennan-Badal, “is being able to attract strong designers, which is just as important as having strong scientists or strong software engineers. We truly believe that New York City’s diverse melting pot and the environment it creates drives greater innovation. That’s so important for any kind of startup, and in life sciences in particular.”

“I can show you examples,” Townsend tells Site Selection, “of life sciences companies that have decided that they could have located themselves in Boston, San Francisco or the Research Triangle in North Carolina, and they decided to put themselves in New York City. Why? Because they believe this is the place where they can attract the talent for specifically what they need.”

And that, Townsend believes, draws the kind of investment that Lexeo hopes to ride to an initial public offering soon. According to CBRE, venture capital funding in the City’s life sciences sector has outpaced that of both Massachusetts and California by a factor of six over the past five years. VC funding in life sciences, says CBRE, has grown in New York from $143 million in 2016 to a staggering $943 million over the first three quarters of 2021.
“Those investors,” says Townsend, “have decided that this is the place to look for opportunities. And that becomes a self-fulfilling cycle, which allows us all to continue to grow. There’s a lot of excitement here,” Townsend believes, “and significant growth ahead.”