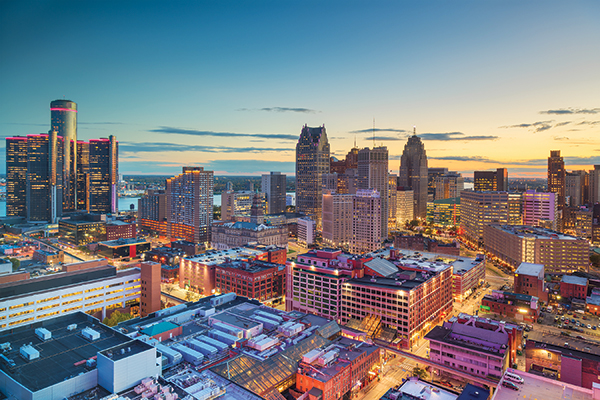 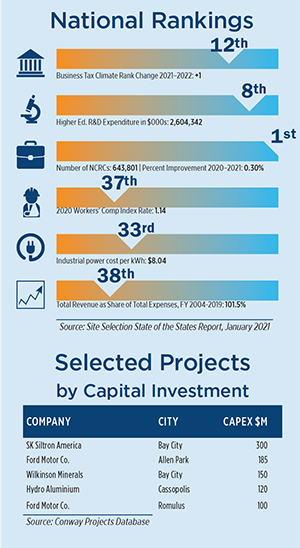 Behind the dozens of high-dollar corporate project investments that landed in Michigan in 2021 — from the likes of vaccine leader Pfizer, automotive leaders such as Stellantis and Magna and machinery and equipment companies KLA, Sartorius and Daifuku — there lies a critical mass of brainpower. And behind that lies a network of R&D, talent and innovation at the state’s higher education institutions.

The spine of that network is the University Research Corridor (URC), an alliance of Michigan State University, the University of Michigan and Wayne State University. In 2021 Anderson Economic Group released its 12th economic impact report on the URC, based on pre-pandemic data. “But it does demonstrate conclusively the importance of the URC to jobs and income in this state, through good times and bad,” said Patrick Anderson, AEG CEO and president.

Here is a summary of that report’s findings, followed by updates on what’s happening at the three campuses since:

In the past five years, the University Research Corridor has conducted more than $542.4 million in mobility-related R&D. 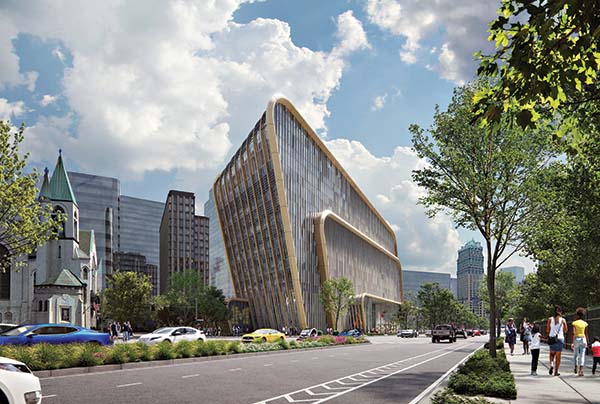 The Detroit Center of Innovation will be built in the District Detroit.

Enrollment at the three universities has grown by more than 16,600 students since 2007, with 141,000 students enrolled in FY 2019, 70% of them from Michigan, but with students also from every other state in the country and 100 other countries. The three URC universities grant nearly 12,000 degrees annually in high-tech areas such as biomedicine and bioscience, as well as nearly 13,000 degrees in high-demand areas such as business, computer science and engineering. They also grant nearly 2,500 medical degrees each year. As of spring 2020, the URC had more than 1.3 million alumni worldwide. Over 690,000 URC alumni live in Michigan, accounting for 10% of the state’s population over the age of 24.

“These are the kinds of graduates needed to create autonomous vehicles, medical devices, better agricultural crops and solutions to the challenges our communities and businesses face today,” said URC Executive Director Britany Affolter-Caine.

The URC universities conduct $2.7 billion in research and development (R&D) annually, which accounts for 92% of all R&D conducted at higher education institutions in the state and makes Michigan a Top 10 state for university R&D.

A separate report in September 2021 found that the URC leads the nation’s top university innovation clusters in preparing the greatest number of graduates for careers in the mobility industry — 14,824 total, more than university clusters in California, Texas and Massachusetts, the report said. It also prepares more than 46% of Michigan graduates who hold degrees in high demand by the mobility industry, such as business, computer science and engineering degrees. In the past five years, the URC has conducted more than $542.4 million in mobility-related R&D specific to the future of mobility, including work that involves autonomous vehicles, crosswalk and curb sensors, cybersecurity, consumer experiences and the social changes new mobility technology will bring.

Helping Industry, Rediscovering Detroit Among other recent highlights from the URC:

The U.S. Department of Energy awarded Michigan State University $2.25 million over the next five years for a new Industrial Assessment Center, or IAC, where faculty, staff and students will work with Michigan companies to save money, improve energy efficiency and shrink carbon footprints. The DOE funds 32 IACs across the country. MSU’s will be the only one operating in Michigan. MSU is also collaborating with Henry Ford College in Dearborn and Michigan Technological University in the Upper Peninsula to ensure that the IAC is suited to serve all of Michigan. 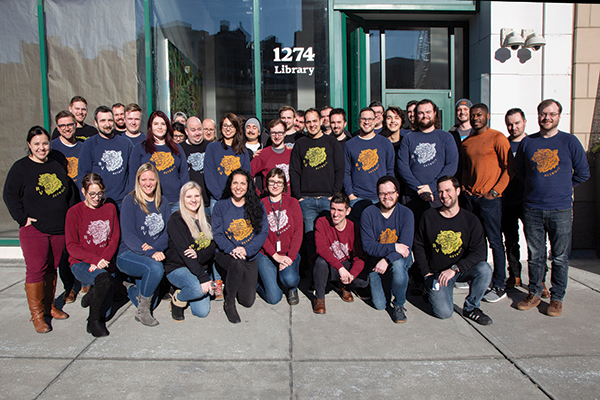 Red Ventures Detroit, a team of engineers, creatives, and business leaders, is a global platform for such brands as Lonely Planet, Bankrate and C|NET.

“The IAC builds upon MSU’s rich history of collaboration with small and medium-sized enterprises in Michigan for the common good,” said Leo Kempel, dean of the College of Engineering. “Ensuring clean water, air and communities for the people of Michigan — while assisting local companies with transformation of their business based to support new markets and customers — has been part of the College of Engineering’s mission since the first class at the end of the 19th century.”

In December, Related Companies, Olympia Development of Michigan and the University of Michigan announced that the Detroit Center for Innovation will be built in The District Detroit, a sports and entertainment destination featuring residential, retail, educational and office space in the heart of the city. The three-building campus will be anchored by an estimated $250 million, 200,000-sq.-ft. research and education center to be operated by U-M. A technology incubator will occupy the to-be-restored and expanded former Loyal Order of the Moose Lodge building nearby.

“As a native Detroiter, I believe it is critical for the DCI to have a catalytic economic and social impact on the people of Detroit,” said Stephen Ross, chairman of Related Companies.  “That impact will be best achieved in The District Detroit where it will connect with existing density and ignite additional development, especially with technology leaders like ServiceNow driving job creation, attracting entrepreneurs and inspiring the next generation of trailblazing talent.” 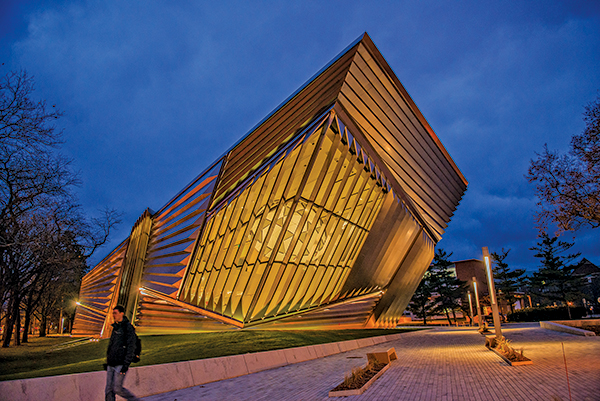 Photo courtesy of the Michigan State University Board of Trustees

ServiceNow plans to expand its current employee base there, as well as build a skilled technology talent pipeline for the future. The company has also committed to creating partnerships and other talent-related opportunities with universities such as Wayne State and the U-M Engineering Career Resource Center, as well as with organizations such as the Boys & Girls Club, in the Detroit area.

“The community-centered development vision for the Detroit Center for Innovation is an essential component of closing Detroit’s equity gap and creating economic opportunities for all Detroiters,” said Bishop Edgar Vann, founder of the Detroit Equity Report.

“ServiceNow is deeply inspired to partner with Stephen Ross and the Detroit Center for Innovation,” said Bill McDermott, president and CEO of ServiceNow. “The amazing talent we need for our company is here in Detroit. We will build a team here, invest in this community and establish a new innovation hub at the forefront of digital transformation.”

“The amazing talent we need for our company is here in Detroit.” — Bill McDermott, CEO, ServiceNow

“This new location and partnership will be the key to revitalizing the Grand River corridor between Cass Tech and downtown, and tying it together with progress being made in the District Detroit,” said Detroit Mayor Michael Duggan. “To have already landed an anchor tenant like ServiceNow on this new campus is a sign of the enormous potential here for new business and residential growth and opportunity for the brilliant young minds in our city.”

The new academic center in The District Detroit is part of the University of Michigan’s growing footprint in and around Detroit, where the university was founded in 1817. The university’s local presence includes its nearby UM-Dearborn campus, a “cradle to career” P-20 collaboration with the Detroit Public Schools Community District at Marygrove College in Northwest Detroit, and the U-M Detroit Center on Woodward Avenue. It also builds on Detroit’s growing presence as a center for innovation, which now includes Ford’s new Corktown mobility innovation campus, TechTown Detroit and Wayne State University.

“We are enthusiastic about what the Detroit Center for Innovation will mean for the city, its residents and businesses, and our current and future students,” said U-M President Mark Schlissel.

“The University of Michigan is already setting the groundwork for this new academic center, and we look forward to providing the kind of advanced educational programs that will meet the needs of an evolving workforce and move our economy forward.”