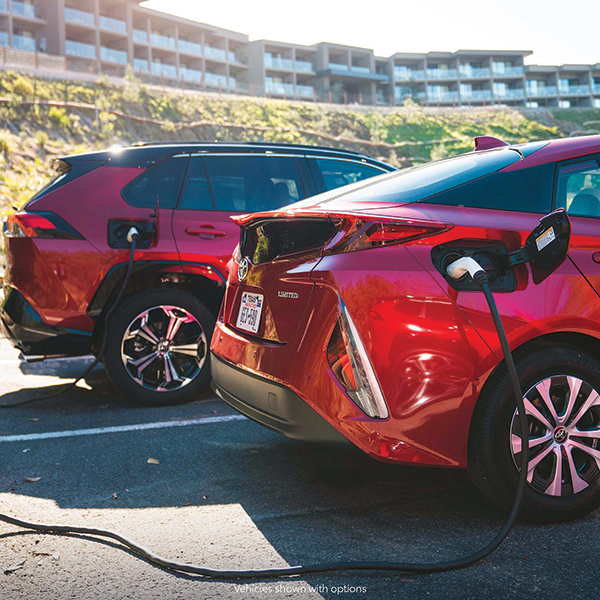 Toyota anticipates increasing its output of electrified vehicles from 25% of its output to 70% by 2030.
Photo courtesy of Toyota Motor North America
by Gary Daughters

Proving once again that good things come to those megasites who wait, the 10-year-old Greensboro-Randolph Megasite in central North Carolina was announced in early December as the location chosen by Toyota Motor North America for a $1.29 billion, 1,750-job EV battery manufacturing plant.

“We stayed the course, and our perseverance paid off big on December 6th,” says Brent Christensen, CEO of the Greensboro Chamber of Commerce. “There were certainly opportunities,” Christensen tells Site Selection, “for us to utilize smaller acreage within that megasite and turn it into kind of a run-of-the-mill industrial park. But we were determined that this would be a transformative project for our region.”

In announcing its decision, Toyota said the 1,825-acre (740-hectare) megasite about 20 miles (32 km.) southeast of Greensboro “met and exceeded” the company’s needs, citing onsite rail, a robust highway system, renewable energy and a “world-renowned education system.” The Greensboro-Randolph Megasite was the bridesmaid in an earlier deal, the Mazda Toyota manufacturing complex that went to Huntsville, Alabama — another mid-sized market — in 2018. 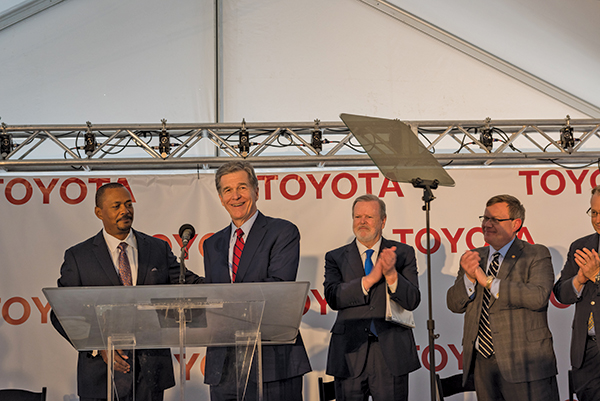 “The future of mobility is electrification, and the Greensboro-Randolph Megasite is the ideal location to make that future a reality,” said Ted Ogawa, CEO of Toyota Motor North America.

The North Carolina Department of Commerce and the Economic Development Partnership of North Carolina were joined by an extensive group of 22 community, government, utility and institutional partners to support the Toyota project. The driving force behind the megasite — a triumvirate consisting of the Greensboro-Randolph Megasite Foundation, Randolph County and North Carolina Railroad — invested $62.5 million to purchase and improve the property, according to Anna Lea Moore, the railroad’s vice president for economic development.

A breakthrough investment by a major OEM had long eluded North Carolina, even as neighboring South Carolina, Alabama, Mississippi and Kentucky accumulated huge automotive wins from both domestic and foreign automakers. Crucial to landing Toyota were changes to language to the state’s longstanding Job Development Incentive Grant program (JDIG) that were part of the state budget signed into law by Gov. Roy Cooper 18 days before the announcement.

“Our legislature ran a little bit long this year, which was fortunate for us, because they were still in session as this was nearing conclusion,” says Kevin Franklin, president of Randolph County Economic Development Corporation. “So, when things were needed,” Franklin tells Site Selection, “the legislative leadership stepped up along with the governor’s office to make sure that they happened.”

And Room to Grow

The budget would end up including numbers that matched Toyota’s soon-to-be-announced job totals. It presciently allocated $135 million (contingent on an investor commitment) to infrastructure improvements and $185 million to reimburse an investing manufacturer at the Randolph County megasite. Changes to JDIG include the introduction of a new category of qualifying project — the “Transitional” project — that joins the state’s existing special classes of High-Yield and Transformative economic development projects. The legislation thus paves the way for Toyota to expand the project.

“Should Toyota increase the number of jobs and capital investment committed to the project to 3,875 jobs and $3 billion of investment within 36 months of today’s award,” the state’s media release states, “the company will trigger Phase 2 of the Transitional JDIG and could then receive up to an estimated $315 million over the life of the grant, which could expand to run for as many as 39 years. The state’s economy would grow by a total of nearly $35 billion, due to the increased scale of the project.”

Christensen says Toyota considered nine other sites in the search that eventually concluded with North Carolina as the winner. He scoffs at the notion that, after finishing second to Huntsville for the Mazda Toyota project, the Greensboro-Randolph Megasite was a shoo-in for a project of this magnitude.

“I certainly wish that were the case, but you have to continue to plow forward to maintain your position,” he says. “We had to continue to market the heck out of the site, and at the same time make sure that the infrastructure was being built, permits accounted for and everything else that goes with having a megasite ready for development. In the end it was hard for others to compete with the timeline we were able to give Toyota to have a plant that was putting product out the door.”