Queensland: A State of High Performance 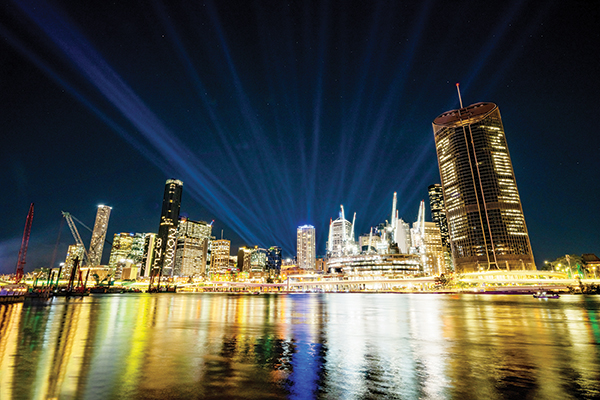 Queensland, whose capital of Brisbane (pictured) will host the 2032 Olympic and Paralympic Games, is proving to be as attractive and affordable to a variety of innovative industries as its lifestyle is to the rest of us.
Photo courtesy Trade and Investment Queensland
by ADAM BRUNS

In 3,800 days, the state of Queensland in the Land Down Under will be on top of the world.
That’s the approximate number of 24-hour periods until the 2032 Summer Olympic and Paralympic Games arrive in Brisbane. The countdown offers the opportunity to showcase a region of 5.2 million people with a 2020 gross state product approaching A$360 billion (US$257 billion) — on a par with the economies of Portugal or Chile, or such vibrant southern U.S. states as South Carolina, Alabama and Louisiana, none of which has ever hosted an Olympic Games. The Brisbane 2032 Olympic and Paralympic Games are expected to generate A$4.6 billion in international tourism and trade for Queensland and a further A$8.5 billion in benefits for Australia.

“Everyone at VALD is buzzing about the prospect of bringing a truly world-class event like the 2032 Olympic Games to Brisbane,” Laurie Malone, co-founder and CEO of human measurement technologies company VALD, tells me. “This is a once-in-a-lifetime opportunity to watch the very best athletes in the world compete in our own backyard. From an economic standpoint, hosting the Olympics will no doubt drive new investment in sectors like tourism, construction, the media and, of course, the sports technology industry. VALD is delighted to be part of that ecosystem and we look forward to continuing to grow in what is a really exciting time for the city of Brisbane.”

Prowess in technology and in athletics are Queensland calling cards. There was no better demonstration of the former than the September 2021 runner-up finish by robotics experts led by Australia’s national science agency CSIRO in the U.S Defense Advanced Research Projects Agency’s Subterranean Challenge, otherwise known as the “Robot Olympics.”

Led by Brisbane-based Dr. Navinda Kottege, among others, the team defeated teams from such institutions as NASA JPL/MIT, California Institute of Technology, and Carnegie Mellon University. “This cements CSIRO’s place as a world leader in robotics and puts Australia firmly on the map in this increasingly important area of science,” said Kottege.

Among a long and varied list of CSIRO projects is the new MILTECS (Military Test, Evaluation, Certification and Systems Assurance) robotics research facility in Pullenvale (one of 13 CSIRO sites in Queensland) developed with defense solutions provider EPE. “The facility is a genuine example of how a joint investment by government and industry combined with collaborative partnership with the research sector delivers critical defense capability outcomes,” EPE Managing Director Warwick Penrose said.

Another landmark defense project also landed in Queensland in fall 2021: Boeing selected Toowoomba as the site for the company’s first uncrewed aircraft assembly plant outside of North America. The facility will produce and assemble the Boeing Airpower Teaming System, the first military combat aircraft to be designed, developed and manufactured in Australia in half a century. Production is to take place at the Wellcamp Aerospace Defence Precinct at Wellcamp Airport, with the project expected to generate up to $1 billion for the Queensland economy. 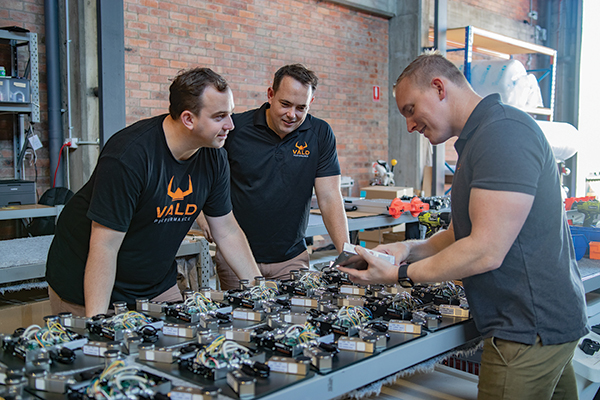 The project follows on a 2020 agreement between the Queensland Government and Boeing Australia, and delivers on a 10-year defense industries roadmap that aims to generate 3,500 new jobs by 2028. In December, Boeing and CSIRO launched a new five-year, A$41 million research program.

Take It from the Top, Times Four

The Queensland economy of today is as varied and diversified as a schedule of Olympic events or the Great Barrier Reef off Queensland’s coast — and just as exciting to explore. I spoke to leaders at four prominent and innovative companies. Together, they present a vivid portrait of Queensland’s future.

VALD grew out of collaboration at the Queensland University of Technology. Today the company’s human measurement technologies are used by more than 1,000 organizations, including 26 NBA teams, more than 120 UEFA teams and more than 35 orthopedic hospitals.

“VALD was founded around the dining table of a sharehouse in Brisbane,” says Laurie Malone of the place he used to live with his best friend and co-founder Sam James. “Although we have employed a global vision from the outset, we are immensely proud of our Queensland roots. Brisbane and the entire South-East Queensland corridor is a fantastic place to live and work. The region is home to several world-class universities, the climate is perfect for outdoor activities, and Brisbane remains an affordable city in which to set up and run a business. Although we also have offices in the United States and the United Kingdom, housing our headquarters in Brisbane allows us to keep in close contact with our Australian clients and the broader Asia-Pacific market. We are in a great location and a useful time zone on the east coast of Australia, making Brisbane the ideal city for a growing company like VALD to be headquartered.”

The natural resources and energy economy has momentum of its own. One of the biggest projects is the new Global Green Energy Manufacturing Centre (GEM) in Gladstone from Fortescue Future Industries (FFI), whose contagious motto is “We’re the Ones Not Waiting.” FFI’s goal is to become the world’s leading, integrated, fully renewable energy and green products company, powering the economy and creating jobs as the world transitions away from fossil fuels. 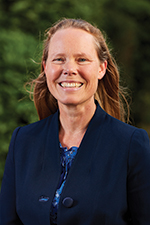 "Gladstone stood out due to its existing skilled workforce, industrial land with proximity to port, a nascent hydrogen industry and a supportive and proactive state government."
— Julie Shuttleworth, CEO, Fortescue Future Industries

FFI CEO Julie Shuttleworth tells me the GEM is “the first in a series of projects that will transform regional Australia through green industry manufacturing and energy production centers. The GEM will be one of the world’s largest electrolyzer, renewable industry and equipment factories, building on regional Queensland’s skilled workforce and creating thousands of new jobs. FFI looked around Australia for the location of its first GEM, and Gladstone stood out due to its existing skilled workforce, industrial land with proximity to port, a nascent hydrogen industry and a supportive and proactive state government.”
Queensland’s infrastructure includes six major international airports,Australia’s fastest telecommunications network to Asia and second fastest to the USA, and 21 ports that handle A$114B in trade annually.

Dr. Angus Forster is chief development and operations officer at Vaxxas, a life sciences company that grew out of research at the University of Queensland. Vaxxas technology delivers vaccine just below the skin surface using a patch covered by microprojections applied with an integrated applicator. In other words: no syringes or needles. Since its location at the Translational Research Institute (TRI, an Australian-first initiative of “bench-to bedside” medical research) seven years ago, the firm has grown from 20 to 80 staff members and performed six clinical trials.

“The location of the TRI is hugely important — close to the city and large hospitals and proximal to the major universities, including the University of Queensland where we still have an active research program based,” says Forster. Today the company has active programs with the Bill and Melinda Gates Foundation for measles and rubella vaccine, the U.S. Government for pre-pandemic influenza vaccines, and with Merck and another multinational on seasonal influenza. “We are also developing and in-licensing our own products starting with a spike protein SARs-Cov-2 vaccine,” Forster says. “To support this growth the Queensland Government is investing in a purpose-built manufacturing and R&D facility specifically for Vaxxas.” It’s scheduled for completion in early 2023. 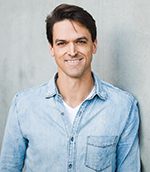 The Queensland Government, he says, “has demonstrated their commitment to supporting a growing and thriving community of biotechnology researchers and manufacturers. This creates a large talent pool and an attractive area for biopharma R&D and manufacturing operations, with the right blend of talent and university medical infrastructure situated in a beautiful coastal setting with a reasonable cost of living. There is a growing base of companies to support early-stage and clinical research including contract testing, research services (especially for Phase I studies) and, increasingly, manufacturing.”

Paul Kelly is general manager, Australia, for Built Robotics, whose aim is to make robots that “build the world,” including units on excavators. The company launched in Australia in 2019 to support a construction partner “heavily involved in construction of gas utilities and renewable energy infrastructure in Queensland,” he says. “Subsequently we have encountered significant similar demand among many construction and mining companies across Queensland and Australia.” 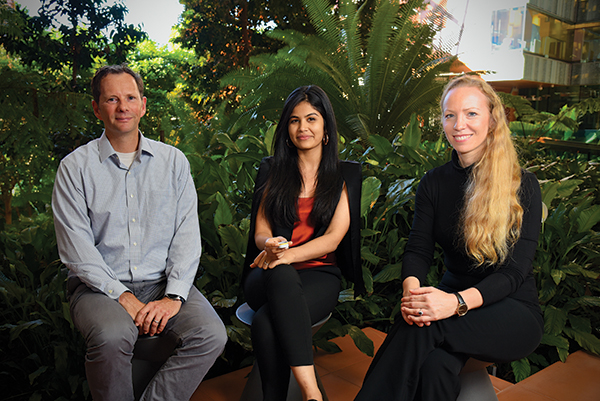 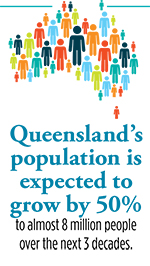 Kelly says his team has been pleasantly surprised by the depth of the robotics innovation ecosystem in Queensland. “With the exception of VC funding, for which the Bay area remains the global epicenter, we’ve found Queensland punches way above its weight. The local software engineering and robotics talent is exceptional. There are well established government-supported research institutions and significant funding support for R&D activities.”

Asked what he’d improve about the industry ecosystem, he says, “Queensland is home to a great combination of large businesses in the resources, energy and defense sectors and also smaller but highly capable suppliers and providers. While offering our services on large infrastructure projects, we’re also able to quickly and cost effectively source many of our supporting hardware components locally without relying on higher risk international supply chains.

“Not a lot to complain about down here,” he adds. “The weather and beaches aren’t too bad, either.”

One question, one answer: Talent 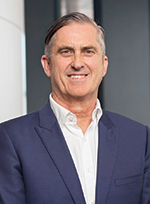 What are the most overlooked or under-appreciated aspects of Queensland’s talent base?

Ross Buchanan (pictured), Global Investment Commissioner for Trade and Investment Queensland: The diversity of our population is sometimes initially overlooked but it is a great strength of Queensland and an asset to organizations and businesses based here.
One-third of Queenslanders are migrants or the children of migrants and that brings a truly global outlook and wealth of cultural experience to our workforce. It means there is a strong languages capability present in Queensland’s talent pool which is invaluable to businesses operating in the Asia-Pacific markets that Queensland sits at the heart of.

Queensland’s universities, in Brisbane and the regions, rank highly on Australia’s Research Council rankings. James Cook University may be world-renowned as a site for reef studies, but it is also above world-class for Geology and Environmental Sciences. The University of Southern Queensland in Toowoomba is similarly ranked for Astronomical and Space Sciences. The University of Queensland in Brisbane has many fields of research above world-class ranking, as befits a globally competitive university ranked No. 36 in the world by US News Best Global Universities Rankings.
Research performance is a strong attracter of domestic and global talent. While much of this talent is in Brisbane, there is exceptional talent in regional Queensland. Queensland’s expertise in defense, clean agriculture, energy, resources, and the marine industry, as well as emerging industries such as hydrogen, space and renewables, mean there are few better locations to be based than regional Queensland.