How a Congested Supply Chain Plays Out in Project Location Trends 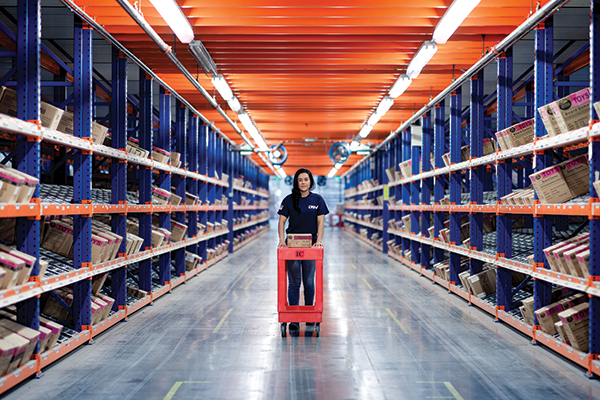 Already busy with multiple facility investments in such locations as Chicago, Spain, Mexico and Sweden (this photo is from its facility in Fontana, California), Danish transport and logistics concern DSV just announced an all-encompassing Green Logistics program in order to reduce emissions for its customers.
Photo courtesy of DSV
by Adam Bruns

The superlatives are accumulating as fast as the shipping containers: Industrial real estate, largely focused on logistics, keeps setting new records, to the point where the pop-up distribution center might soon be as common as the pop-up retail spot once was.

It’s gotten to the point where even a defunct driving range has potential to trade in the Big Bertha for an entirely different kind of driver.

That’s what happened in early December in Los Angeles, where Chicago-based CenterPoint Properties purchased nine acres from Signal Hill Petroleum in the center of the industrial market near the Ports of Los Angeles and Long Beach. It plans to redevelop the abandoned driving range immediately into a warehouse with 17 dock doors and 73 trailer parking stalls. “The sale speaks to the ever-increasing demand for quality Class A industrial space in the market, particularly for hard-to-find sites with five or more acres,” said a press release from Kidder Mathews, whose Tom Holland was one of three brokers representing CenterPoint in the transaction.

“We’re seeing almost 0% vacancy coupled with unprecedented rent growth and land values,” Holland said. “The largest increases have occurred within the last four months and are expected to continue in the near term.”

Transwestern’s Q3 U.S. Industrial Market Report said multiple records are being set across key performance indicators. Over 540 million sq. ft. of net absorption was reported over the last four quarters, “making it the first time in history that occupancy has increased by more than 500 million square feet year over year,” the Houston-based service provider reported. 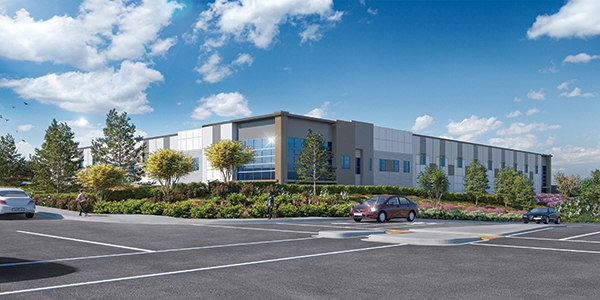 When nine acres that were home to a defunct driving range came available near the Ports of Los Angeles and Long Beach, CenterPoint grabbed the parcel fast in order to develop more warehouse capacity in a congested market with zero vacancy.

The third quarter saw net absorption of 158.8 million sq. ft., “the largest quarterly growth since 2008.” And asking rents increased to $7.11 per sq. ft. in the third quarter, with more than one-third of the 44 tracked markets reporting double-digit percentage growth year over year. Transwestern said it marked the first time the average asking rent for industrial space in the U.S. surpassed $7.00 per sq. ft.

“We expect continued elevated net absorption as pre-leased construction projects are delivered to the market,” said Matthew Dolly, research director at Transwestern. “Further, the boost in rents is making redevelopment opportunities more feasible, which will benefit both core and expanding markets such as Savannah, Austin and Pennsylvania’s Lehigh Valley.”

Transwestern says currently there is 636.6 million sq. ft. of industrial space under construction nationally, nearly double the volume five years ago. “Approximately 27% of this space is concentrated in six markets: Dallas, Phoenix, Atlanta, the Inland Empire, Chicago and Philadelphia. When measured as a percentage of existing stock, the construction pipeline signals future expansion heavily concentrated in the Sunbelt.”

Do Site Selection’s numbers from the Conway Projects Database confirm this trend?
Of the more than 1,670 corporate end-user facility investments with a distribution/warehouse function that we’ve tracked in the U.S. since January 1, 2021, the map on p. 68 shows how the numbers play out by top states and metro areas. Indeed, three of the top 10 states are outside the Sunbelt, and likewise, only three of the top 10 metros are too.

Just as pronounced is the tilt toward areas helping move goods out of ports. Savannah and Charleston, ever the port rivals, actually tie in corporate end-user projects tracked by our database in 2021, with 15 each.

But there are also healthy numbers in such intermediate and intermodal places as Atlanta, Richmond, California’s Inland Empire, Phoenix (just outside the top 10 with 22 projects), Denver, Indianapolis, Dallas and Charlotte (another area just outside the top 10 with 23 projects). Here are the markets in positions 11 through 20 in our 2021 tally through early December:

Of more than passing interest, of course, is who is investing in all of these facilities. It will come as no surprise that exactly 200 of the approximately 2,000 logistics projects Site Selection tracked in 2021 were from Amazon.com or its Amazon Air partner.

There are so many Amazon projects that one savvy economic developer recently wrote to me asking questions that prompt speculation: At what point, despite the company’s private-sector status, are they no longer corporate projects deserving of courtship, service and incentives, but rather a new form of logistics infrastructure like a railroad, pipeline or transmission tower? 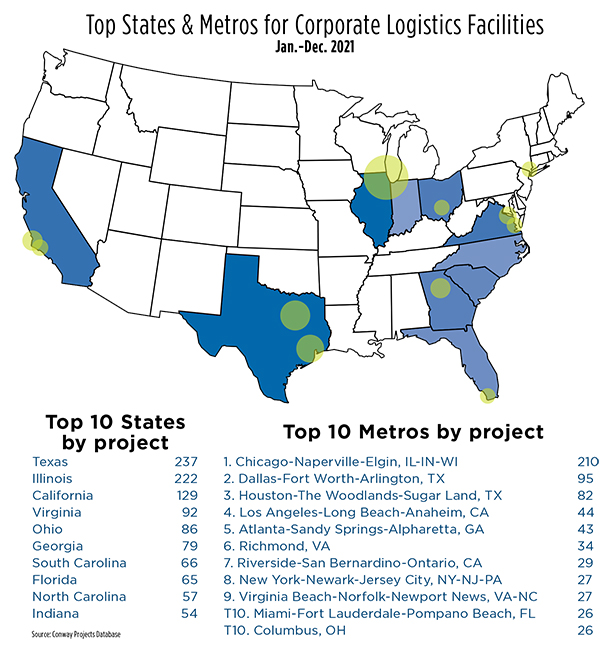 Given that those 200 Amazon projects are generating on the order of 55,500 jobs, the question will remain a philosophical one in the near term. But the company’s omnipresence — which doesn’t even take into account its Amazon Web Services ubiquity — might very well look to many onlookers like the utility of tomorrow.

Other Companies on the Move

Even though the e-commerce giant’s project totals dwarf others, it’s worth noting which other investors were busy with multiple facility projects in 2021. Among them:

With 200 projects to its name in 2021, Amazon was the leader by a longshot in facility projects, with nearly as many projects as Chicago (210), the year’s top logistics metro area in the world.