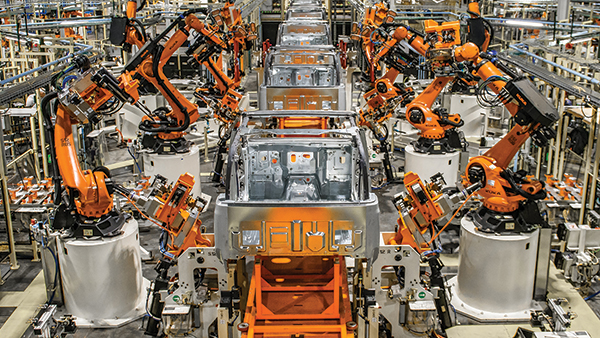 The KUKA Toledo Production Operations (KTPO) in Toledo, Ohio, has
built all of the body-in-white Jeep® Wranglers sold in the world since it began operations in 2006, producing one unpainted vehicle body every 77 seconds.
Photo courtesy of KUKA and IFR
by ADAM BRUNS

The 2021 World Robot Statistics released by the Frankfurt, Germany-based International Federation of Robotics in December show the rate of industrial robot use is accelerating at a speed to rival their efficient movements in factories.

The average global robot density of 126 robots per 10,000 employees is nearly double what it was in 2015 (66 units). Asia leads the way with 134 units per 10,000 employees, followed by Europe with 123 units and the Americas with 111 units. The top five most automated countries in the world are: South Korea, Singapore, Japan, Germany and Sweden.

“Robot density is the barometer to track the degree of automation adoption in the manufacturing industry around the world,” says Milton Guerry, president of the International Federation of Robotics.

The fastest-growing robot density is in China, where the rate rose from 49 units in 2015 to 246 in 2020. But the highest robot density continues to be in South Korea, where electronics and automotive have helped the country lead the way since 2010. The Republic of Korea claims 932 units per 10,000 workers — seven times the global average.
With 605 robots per 10,000 workers, Singapore is No. 2 in the Asia and in the world, followed by Japan with 390. Japan not only uses robots, but knows how to use them to make more robots: “The production capacity of Japanese suppliers reached 174,000 units in 2020,” says the IFR. “Today, Japan´s manufacturers deliver 45% of the global robot supply.”

At 255 units per 10,000 employees (up from 176 in 2015), the United States now ranks No. 7 in the world, ahead of China. “The modernization of domestic production facilities has boosted robot sales in the United States,” says the IFR. “The use of industrial robots also aids to achieve decarbonization targets, e.g. in the cost-efficient production of solar panels and in the continued transition toward electric vehicles. Several car manufacturers have announced investments to further equip their factories for new electric drive car models or to increase capacity for battery production. These major projects will create demand for industrial robots in the next few years.” 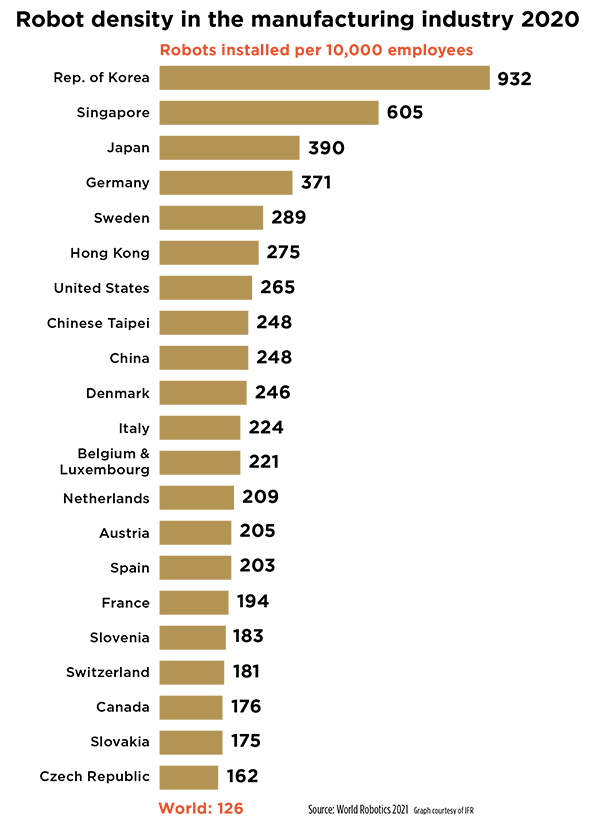 Collaboration is key to our success 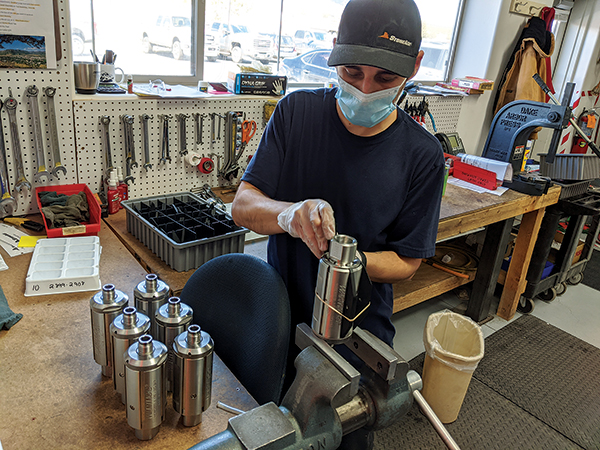 Colorado is home to over 6,000 manufacturers that cover a wide range of industries: from Aerospace and Biomedical to the Outdoor and Food & Beverage industries. This diversity adds to the overall health of the economy. At the same time, manufacturers have a diverse group of partners, all with the shared mission of growing and expanding manufacturing in the state, that they can access to improve their businesses.

The Colorado Office of Economic Development and International Trade (OEDIT) works closely with our partners at Manufacturer’s Edge and the World Trade Center to ensure manufacturing’s success in the Centennial State.

As the official Manufacturing Extension Partnership (MEP) Center for the state of Colorado, Manufacturer’s Edge’s mission is to help manufacturers grow and improve their businesses through consulting, training, advising, networking, and collaborating to evaluate needs throughout the organization. The MEP National Network consists of a total of 51 centers with one in each state and Puerto Rico. By leveraging this extensive network of experts and trusted advisors, Manufacturer’s Edge can assist companies with everything from process improvement and Lean manufacturing practices to succession planning, cybersecurity, and much more.

The urban corridor that stretches along the Front Range from Pueblo in the south to Ft. Collins in the north has a tremendous amount to offer. This includes access to outdoor activities, cultural events, educational opportunities and beyond. That said, some manufacturers and employees desire a quieter, more rural lifestyle. OEDIT has dedicated rural staff to assist these organizations. Their goal is to support local communities, where the representatives live, through connecting with the Rural Technical Assistance Programs, Small Business Development Centers, the Minority Business Office and Colorado Employee Ownership Office. The Rural Opportunity Representatives also connect manufacturers to other programs and funding through other OEDIT divisions and partners.

While there is tremendous opportunity to sell goods and services within Colorado, manufacturers who wish to expand their horizons beyond the US have several resources including the State Trade Expansion Program (STEP) through OEDIT and the World Trade Center. The World Trade Center Denver is a business network and services organization dedicated exclusively to the international business success of companies based in Colorado and the surrounding Rocky Mountain region. Their sole purpose is to help local companies succeed internationally. The World Trade Center Denver’s mission is to build a strong future for the diverse industries of the Rocky Mountain Region by helping members collaborate locally, connect strategically, and thrive on the global stage.

All three of these organizations partner together to bring a vast amount of resources to manufacturers in Colorado — one of the state’s largest sectors of the economy. The partnership of OEDIT, World Trade Center Denver, and Manufacturer’s Edge assure that the state of Colorado will continue to be a destination for the manufacturing community.

To learn more and start a conversation, visit choosecolorado.com.

Like communities throughout the country, Clarendon County, South Carolina has experienced challenges with economic growth over the past two years due to the COVID-19 pandemic.  Despite ups and downs generated by the pandemic, our community didn’t just survive the whirlwind, it prospered.

“During the pandemic we’ve noticed a shift in manufacturing priorities in the supply chain.  More and more companies are looking to mitigate risks and cannot rely on the supply chain originating overseas,” explains George Kosinski, Executive Director of the Clarendon County Development Board. “Since 2020 we have announced multiple new projects totaling 30 million in capital investment and over 350 new jobs. This type of robust growth has not been experienced in over a decade and it would not have been possible without the availability of skilled labor, available product and a supportive business ecosystem,” Kosinski added.

Uniquely situated on the I-95 corridor with six interstate interchanges and centrally located in South Carolina, Clarendon County is an ideal location for manufacturing facilities seeking logistical advantages. Bisecting the county from north to south, I-95 provides existing industries effortless interstate access along the U.S. Eastern seaboard.  This major throughfare also connects to I-26 providing a direct route to port and air cargo transport resources. The Port of Charleston is a mere 80 miles southeast and 60 miles to the west will give you access to Columbia Metropolitan Airport (CAE) and its UPS and FedEx air hubs.

Seven industrial sites are located throughout the more than 607 square miles of business-friendly soil located within the county.  With ample infrastructure and green field sites ranging from 5 to 1,400 acres, plus an expandable 50,000 square foot speculative building under development, companies have a varied selection of properties from which to launch their next facility.  A pro-business environment, supported by an aggressive local incentive structure and readied network of economic development experts, help accelerate speed to market for prospective companies.

With a dedicated and ample labor force of over 200,000 skilled hands within a 60-minute drive, businesses in Clarendon County have a reliable talent base at their doorsteps.  Bicycle Corporate of America launched its local operations in 2014 with the intention of reshoring assembly from China. BCA Human Resources Manager, LaShonna Meagley, says finding quality employees is not a difficult task.  “We have an outstanding team consisting of a core group who are loyal and committed to producing safe bikes for the public,” explains Meagley.

If you’re ready to take your company to the next level, bring it to the destination for success. Visit clarendoncountyusa.com to discover more about why Clarendon County, South Carolina is the ideal location for your business.