BALTIMORE IS WIRED FOR TECH ENTREPRENEURS 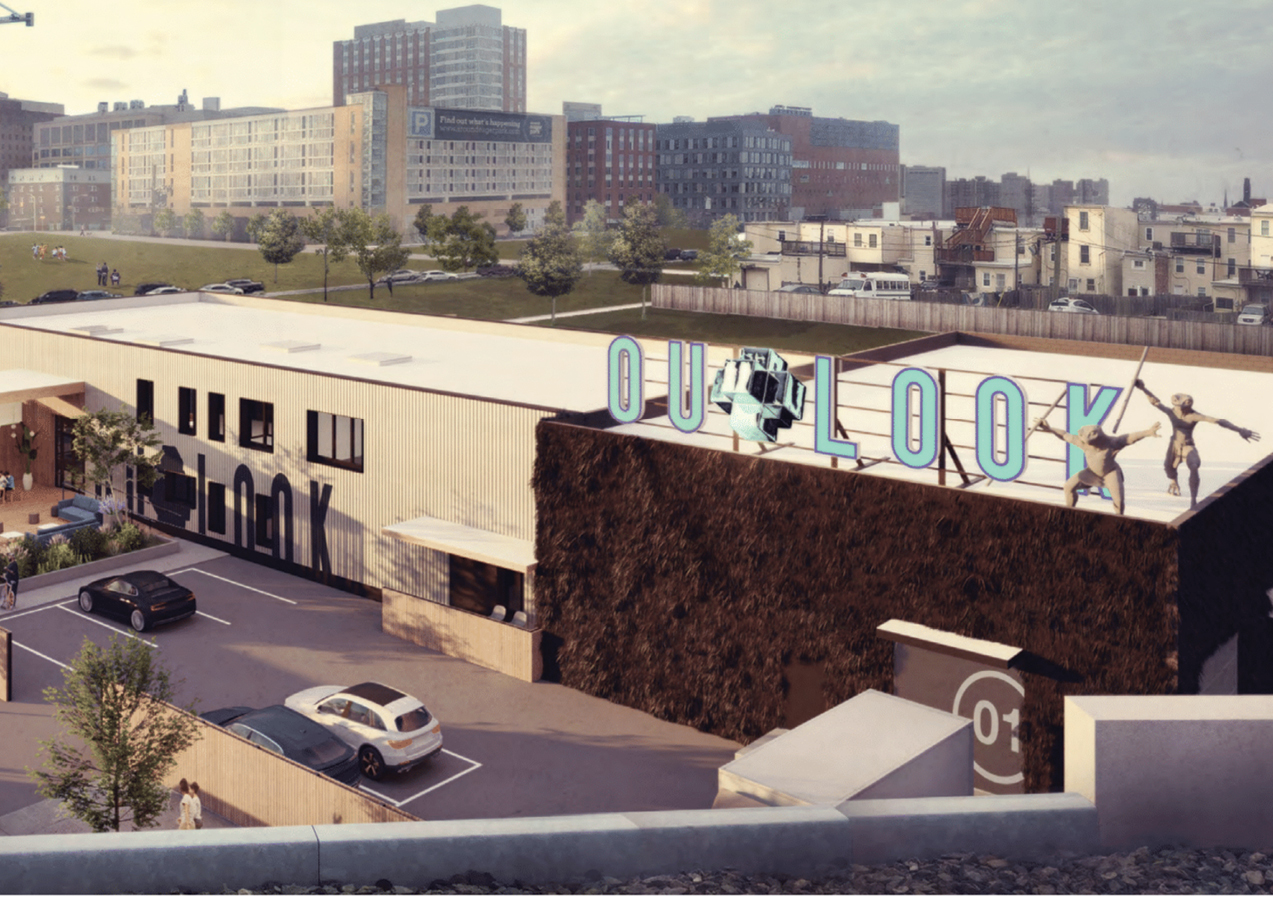 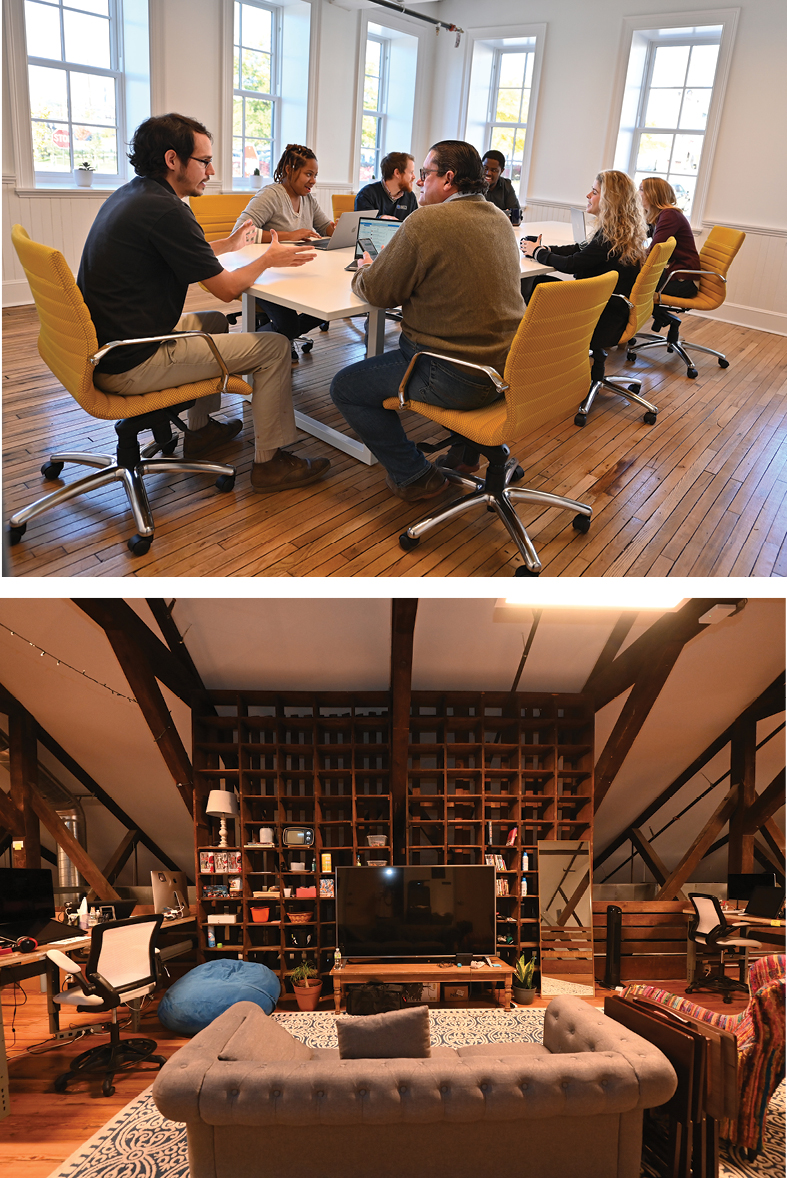 ith his massive, tatted arms, hulking torso and all-around swagger, Trevor Pryce might at first seem less the studio captain he is today than the NFL lineman he was for 14 seasons. An All-Pro defensive end, Pryce played with the Baltimore Ravens from 2006 to 2010, returning to the city several years ago for a second act in show business.

Pryce, 46, is CEO of Outlook Company, a software-driven animation venture he launched in 2019 on the campus of Maryland Institute College of Art (MICA).

“If I was going to try to build an animation studio, where was I going to find animators, right? MICA has lots of animators and lots of talent. And I get first dibs,” he confides.

Having moved to a renovated factory complex in East Baltimore, Outlook has since inked production deals with Netflix and recently launched a talent development program with Cartoon Network Studios, sending the young company into expansion mode. Pryce is adding 40,000 sq. ft., looking to hire 150 full-timers over the next two years, and thinking big beyond that.

“My neighborhood,” he proclaims, “is going to become the epicenter for technology and storytelling. We’re the only animation studio for 700 miles. No one in in the mid-Atlantic has ever done what we’re doing.”

Outlook’s newest studio is to open next summer, says Pryce, at East Baltimore’s former Hoen Lithograph Campus, converted to the tune of some $26 million — with significant public buy-in — by Baltimore’s Cross Street Partners. The complex consists of six buildings, lots of room to accommodate Pryce’s dreams. For starters, he needs space for the mammoth virtual production stage that will allow scenes shot in East Baltimore to appear as though they might be anywhere, and under any conditions.

“You’ll maybe see a guy walking through the jungle, and I go ‘cut,’ and say to move the sun from here to there. And we can do that just by dragging a mouse, so now the light is coming in this way. And it all looks very real.”

Outlook’s expansion is being supported by a $450,000 conditional loan from the state’s Advantage Maryland fund and a second conditional loan of $200,000 through the Baltimore Development Corporation.

Now “in love” with the city, Pryce concedes that he arrived to play for the Ravens with little to go on beyond TV impressions. “All I really knew about Baltimore was ‘The Wire,’ ” he remembers. “So,
I was kind of like, ‘Whoa, Baltimore. You for real?’ But it turns out there’s a tremendous amount of upside here that a lot of people haven’t seen. We’re tapping into that.”

Sonavi Labs, maker of a medical listening device called Feelix, began its mission in 2017 with a question: “How does acoustics tie into medicine?”

The person asking is Ellington West, Sonavi’s CEO and co-founder, now among the brightest stars in Baltimore’s firmament of tech entrepreneurs. Young, brainy and charismatic, West knows all about listening, as she’s the daughter of acclaimed Johns Hopkins acoustician James Edward West, inventor of the original electret microphone. As in, that key component of every mobile phone on the planet.

“He’s won everything but the Nobel Prize,” she laughs.

For its high-fidelity stethoscope — augmented by artificial intelligence, hatched from Johns Hopkins technology and nurtured by support from the Gates Foundation — Sonavi initially sought a commercial sweet spot as a means for detecting signs of childhood pneumonia and transmitting the data to specialists. Numerous nationwide accolades and several “pivots” later, West says, Feelix’s true potential now lies in helping doctors monitor respiratory health remotely. After FDA approval in 2021, Sonavi is expanding beyond its limited market release this year.

“If we know that there are chronic respiratory patients who have a high risk of being hospitalized,” she says, “let’s give them one of our devices so their doctors can check in on them.”

As a catalyst for Baltimore’s tech industry, the value of Johns Hopkins, West believes, extends far beyond the patents it generates.

“When you have the world’s best pulmonologists, the world’s best engineers, and access to that hospital system, that’s everything and more. But for me building a business, the big thing is that I also have access to a pipeline of brilliant engineering graduates.”

Not to mention she has the ear of a certain Johns Hopkins legend.

“The technology we utilize on Feelix,” she wants you to know, “is based on my dad’s initial microphone. That’s a continuation of his legacy, which I think is pretty cool.”

In addition to its academic muscle and growing roster of tech-based ventures like Outlook and Sonavi, plus expanding sources of venture funding, Baltimore’s entrepreneurial universe extends to some 32 incubators, 39 coworking spaces, four accelerators and more than two dozen mentorship programs. That’s according to EcoMap Technologies, the Baltimore-based startup whose algorithms “scrub” data on assorted ecosystems from open sources and funnel it into platforms that serve as one-stop, digital maps. 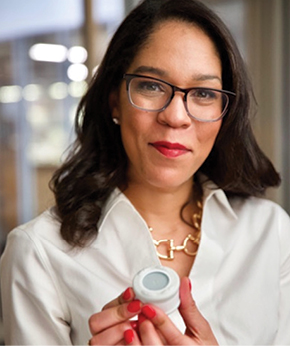 “How does acoustics tie into medicine?”

“We’re trying to make it just as easy to find information about the ecosystems around you, whether a geographic community or an industry, as it is to do a simple Google search,” says Pava LaPere, EcoMap’s 25-year-old founder and CEO, another Johns Hopkins grad.

EcoMap launched its first product in 2020, and since then life has been a “fever dream” for LaPere, triggered by unexpectedly enthusiastic demand. Easily recognizable as a tool for entrepreneurs, EcoMap’s ultimate promise, LaPere believes, is as a mine of information for what she calls “entrepreneur-led economic development.”

Baltimore, she says, “is the perfect environment for me to pursue that. It is a city that’s rethinking its economic future and there’s a strong movement here to make that happen. People here,” she says, “have passion and grit, and even a chip on their shoulder. There’s a very special energy in Baltimore.”