The Visual Arts Capital of Texas 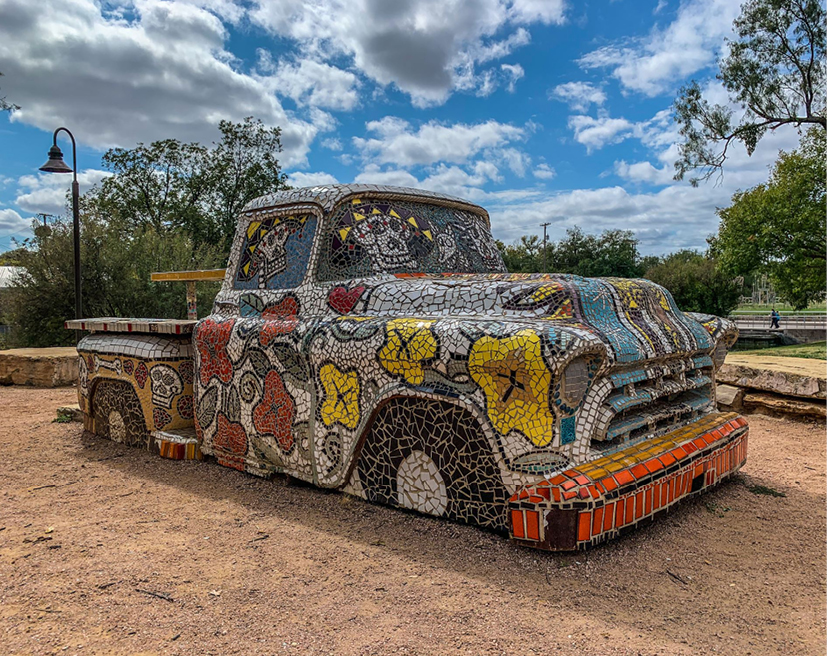 This San Angelo mosaic in Firefighter’s Memorial City Park was created by city workers and firefighters using a retired firetruck as part of Art in Uncommon Places.
Photo courtesy of San Angelo Convention & Visitors Bureau
by Adam Bruns
I

f asked where the most distinctive art in Texas is to be found, some might point to Marfa, the now tony enclave for creatives in the Big Bend region that grew legendary after minimalist Donald Judd created large-scale installations and other works after he moved there in the 1970s. Others might take you to Houston, where the Rothko Chapel continues to invoke “a stillness that moves.”

But the official visual arts capital, as of the June passage of a House Concurrent Resolution by the Texas Legislature in June 2021, is San Angelo, the city of 100,000 in west central Texas. Among other works, the city is home to:

San Angelo Economic Development expects a resurgent oil and gas industry to drive employment growth. Forthcoming assets include the San Angelo Rail Park, a 180-acre on the city’s north side from South Plains & Lamesa Railroad that will serve as a multi-commodity transportation interchange. San Angelo-based shortline operator Texas Pacifico Transportation is investing $100 million phased into the rehabilitation of the South Orient Rail Line, as the area anticipates the impact of the opening of the reconstructed Presidio-Ojinaga International Rail Bridge, destroyed by fires in 2008 and 2009.