The top places for sustainability don’t talk about finding solutions. They go out and find them. 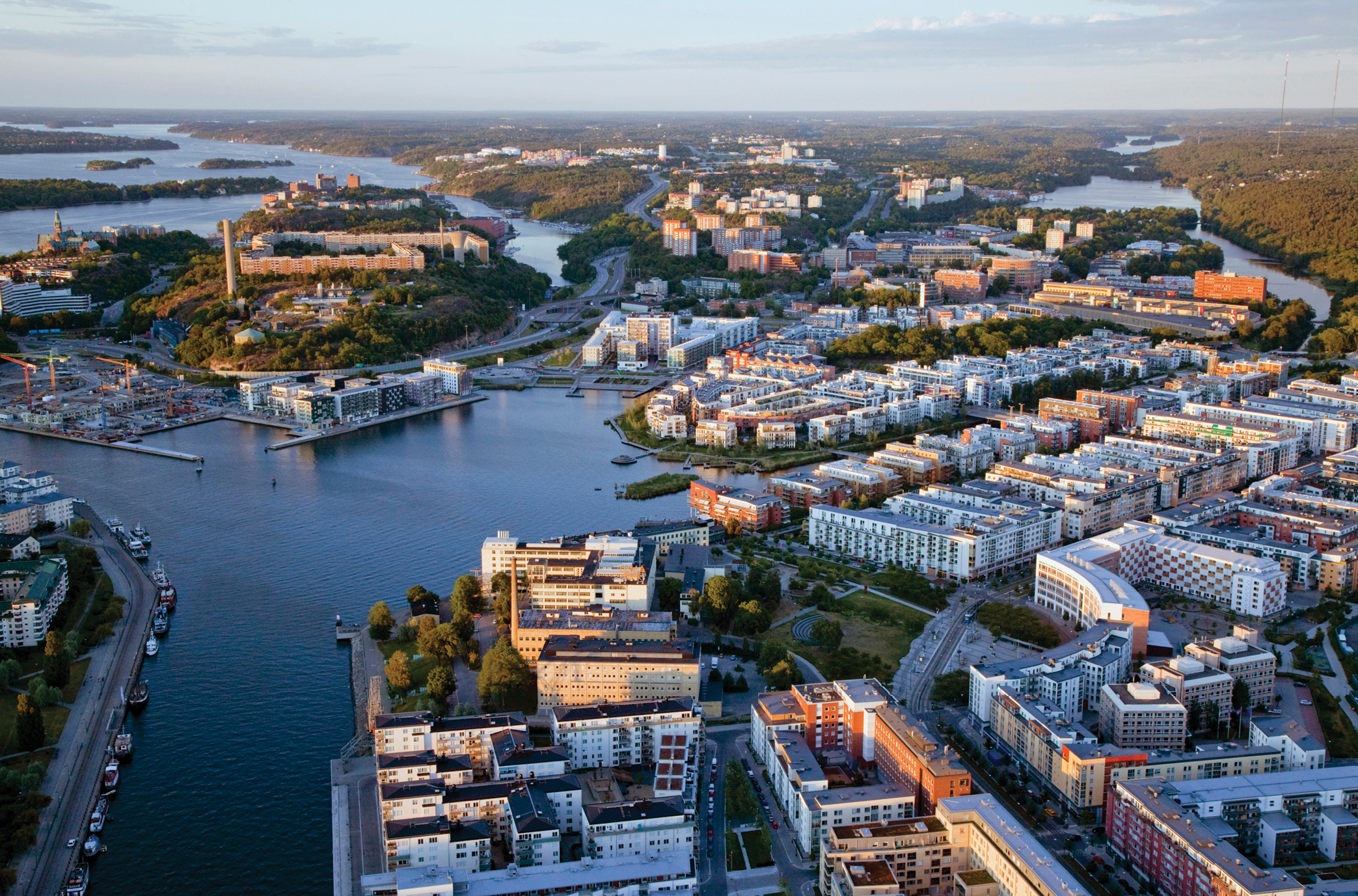 A former industrial wasteland, Hammarby Sjöstad in Stockholm, Sweden, has become a model for sustainable eco-districts in cities around the world.
Photo Credit: Ola Ericson/imagebank.sweden.se
by Adam Bruns
M

That’s the slogan of Northvolt, the fast-charging Swedish battery manufacturer now employing more than 3,000 people as it aims to produce as 150 gigawatt-hours of battery cells by 2030, and use clean energy to power its operations.

Northvolt embodies the clean, green business environment that makes Sweden the No. 1 most sustainable country in the world in this year’s Site Selection Sustainability Rankings, based on a unique index of factors from renewable energy production to LEED-certified buildings to the corporate social responsibility (CSR) levels of companies doing business there. The company is spreading the wealth of its investments too, this spring alone establishing a battery recycling plant in neighboring Norway; a third battery Gigafactory that will create 3,000 jobs in Germany, Site Selection’s No. 4-ranked country for sustainability; and a lithium conversion plant in Setúbal, Portugal (ranked No. 7) via a JV with energy company Galp that will seek the use of green energy to power the conversion process. 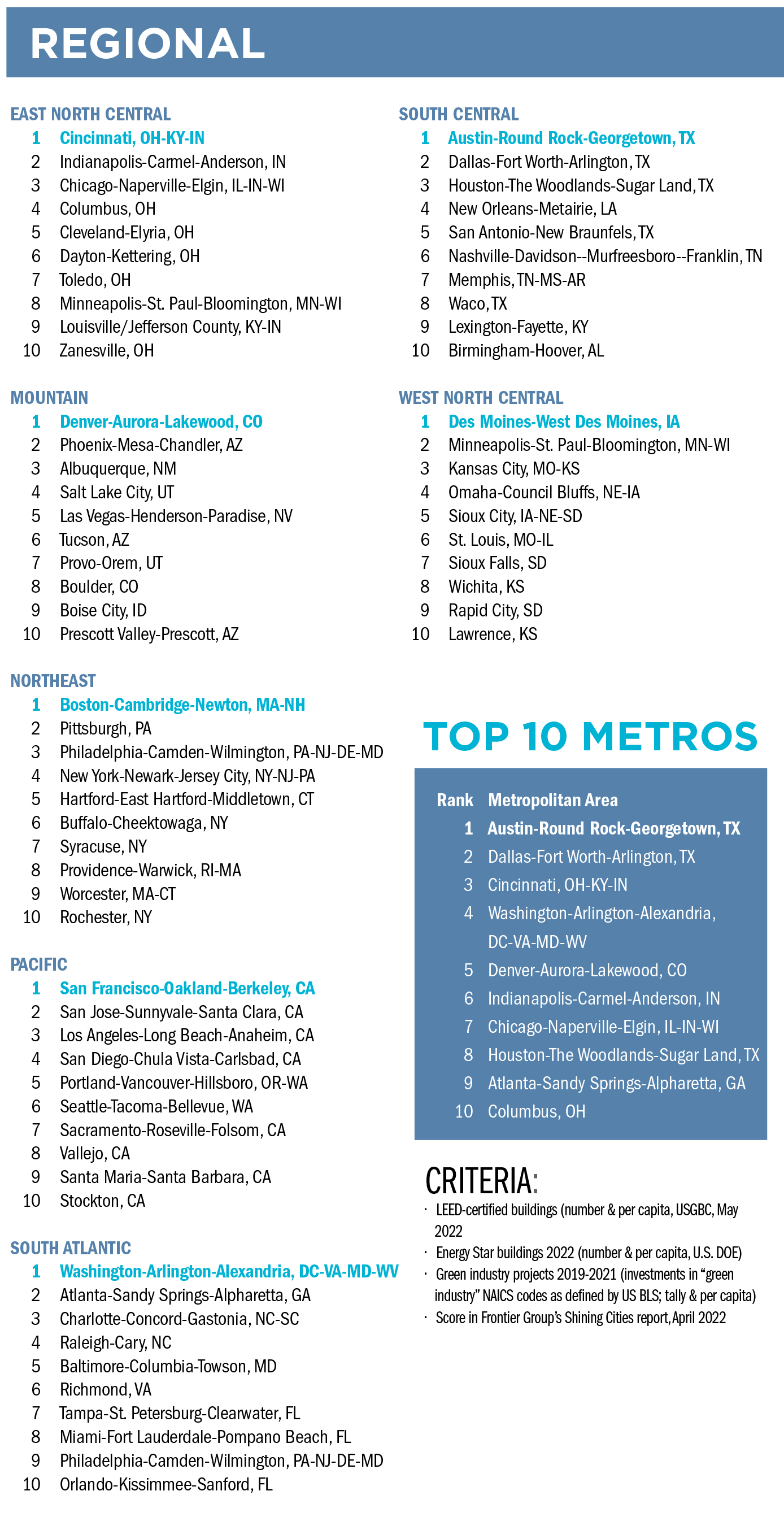 “This is the type of project Portugal and Europe should develop for economic growth and to build a sustainable energy future,” said Galp CEO Andy Brown of the nearly €700 million, 200-job project. Sustainability certainly helped decide the selection of Heide, Schleswig-Holstein, for the German Gigafactory, with Northvolt noting “the region hosts the cleanest energy grid in Germany, one which is characterized by a surplus of electricity generated by onshore and offshore wind power and reinforced by clean energy provided through grid interconnections to Denmark and Norway.

“It matters how we produce a battery cell,” said Peter Carlsson, CEO of Northvolt. “If you use coal in your production, you embed a fair amount of CO2 into your battery, but if we use clean energy, we can build a very sustainable product. Our philosophy is that new energy-intensive industries, such as battery manufacturing, should be established in actual geographical proximity to where the clean energy is produced.” 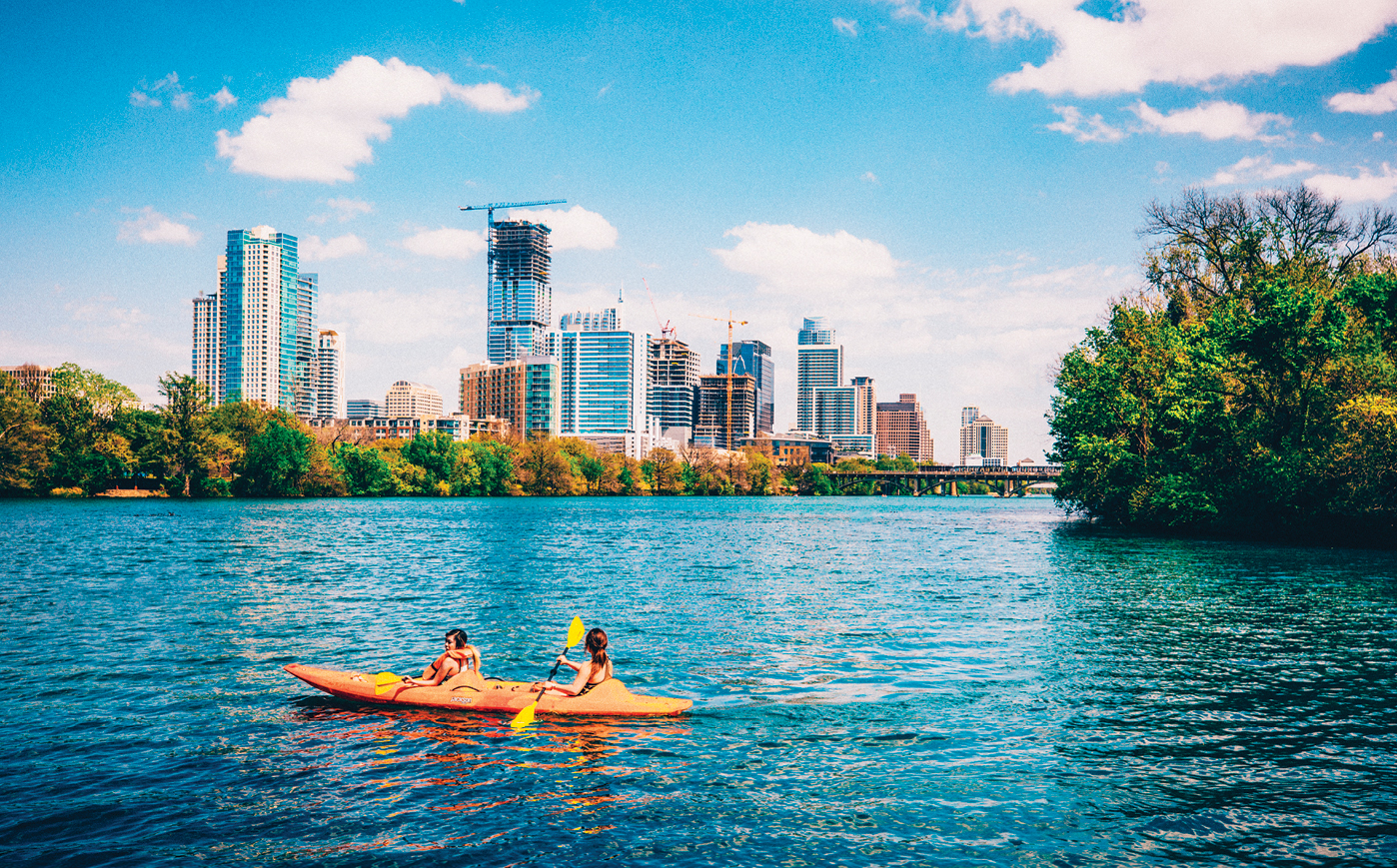 Citizens and companies in the No. 1-ranked Austin metro area know there are ways to act sustainably while still encouraging smart growth.

That sort of thinking is one of several aspects of CSR now coloring location decision-making. It’s why, among several unique components, our rankings methodology includes insights from the global database of our friends at CSRHub. Every year they crawl their records of corporate CSR performance so we can mash them up against our data tracking where companies are investing in facilities and see where the highest-CSR companies are locating themselves.

Two changes to the methodology this year are worth noting: 1) We jettisoned brownfield project funding from our U.S. rankings because, while redevelopment is laudable and good, we were convinced by those who told us it unnecessarily penalized places low on contaminated land to redevelop. 2) Short of a new Gallup/Sharecare well-being poll, we chose to drop their survey of several years ago. We wanted to use well-being data, but as most of us can attest, based on our experience of the past couple of years, the jury is still out on how we’re feeling.

This year’s rankings and their criteria speak for themselves. After Sweden, the U.S., Spain, Germany and Finland fill out the top five countries. Texas, Illinois, New York and Arizona top our state measures, followed by California and Colorado in a tie for fifth. Among U.S. metros, we go back to Texas again to find Austin at No. 1, trailed by Dallas-Fort Worth-Arlington, Cincinnati, the Washington, D.C. metro area (including Arlington, Alexandria and parts of three states) and metro Denver, where the air is rare and the vistas are plentiful.

Maria T. Vargas is a senior program advisor and the director of U.S. Department of Energy’s Better Buildings Initiative, which aims to help public and private sector leaders make U.S. buildings 20% more efficient in the next decade. Before that, she was brand manager for the ENERGY STAR program for almost 20 years while at the U.S. Environmental Protection Agency. (Energy Star data, along with LEED-certified facility data from around the world, are criteria in our U.S. rankings.) More than 950 organizations participate in the Better Buildings Initiative, which includes a strong industrial component: More than 360 partners have entered the Better Buildings, Better Plants challenge, and the program’s solution center features more than 300 solutions for the industrial sector.

In a conversation this spring, Vargas told me one of the lingering challenges in the Energy Star program was the tendency of companies to do energy efficiency projects on one or two buildings, “but they owned 100.” Now the ask is portfolio-wide: Kohl’s, for example, is known for applying its sustainability principles across all of its stores. She says corporate leaders also recognize now that they’re not going to buy their way out of their challenges by just purchasing green energy certificates. And some devise creative solutions. A leader at one big industrial stakeholder told Vargas, “Why not make energy efficiency part of the compensation package for the c-suite?”

Exemplars of sustainability are all around, she says: 3M, Ford, Iron Mountain, Eastman Chemical, Alcoa, Deschutes Brewery. Recently her team came up with a creative way to showcase them: the Better Buildings Swap, whereby companies were forced to swap energy teams with other companies not in their same sector. Think Hilton and Whole Foods, or in one memorable exchange, GM and L’Oreal. “Motors vs. mascara,” Vargas says of the six-minute episodes. “It was a fun way to see the different things different kinds of manufacturers are doing.”

As for communities, Vargas says one of the most exciting things to watch is when metro areas work together to take on a challenge. “Some of our most interesting work was in Atlanta,” she says of this year’s No. 9-ranked region, where enrolled square footage grew from 15 million sq. ft. to over 100 million sq. ft. Whether it’s a company or community, momentum can ebb and flow as leadership or priorities shift. But Vargas has witnessed time and time again the power of individuals to effect change. “They’re willing to put in the work to figure it out. They’re the ones who make it happen, and when they leave, things might not continue because the change agent has left.”

Which is why, she says, it’s important to leave a map. Greenwashing, sustainability reports and Earth Day press releases spouting lofty goals will only take you so far. As climate challenges exert more pressure on organizations, she says, “We need the pathways. We don’t need any more goals.”

‘It’s More Existential Than That’

One company using data to define those pathways is Measurabl, the world’s most widely adopted ESG data management solution for commercial real estate, whose customers measure, manage, and report data on more than 12 billion sq. ft. of commercial real estate in 90 countries. Measurabl Founder and CEO Matt Ellis in May released a new book, “From Green to ESG: How Data-Driven Transparency Changed Real Estate for Good,” that seeks to do exactly what Vargas describes. 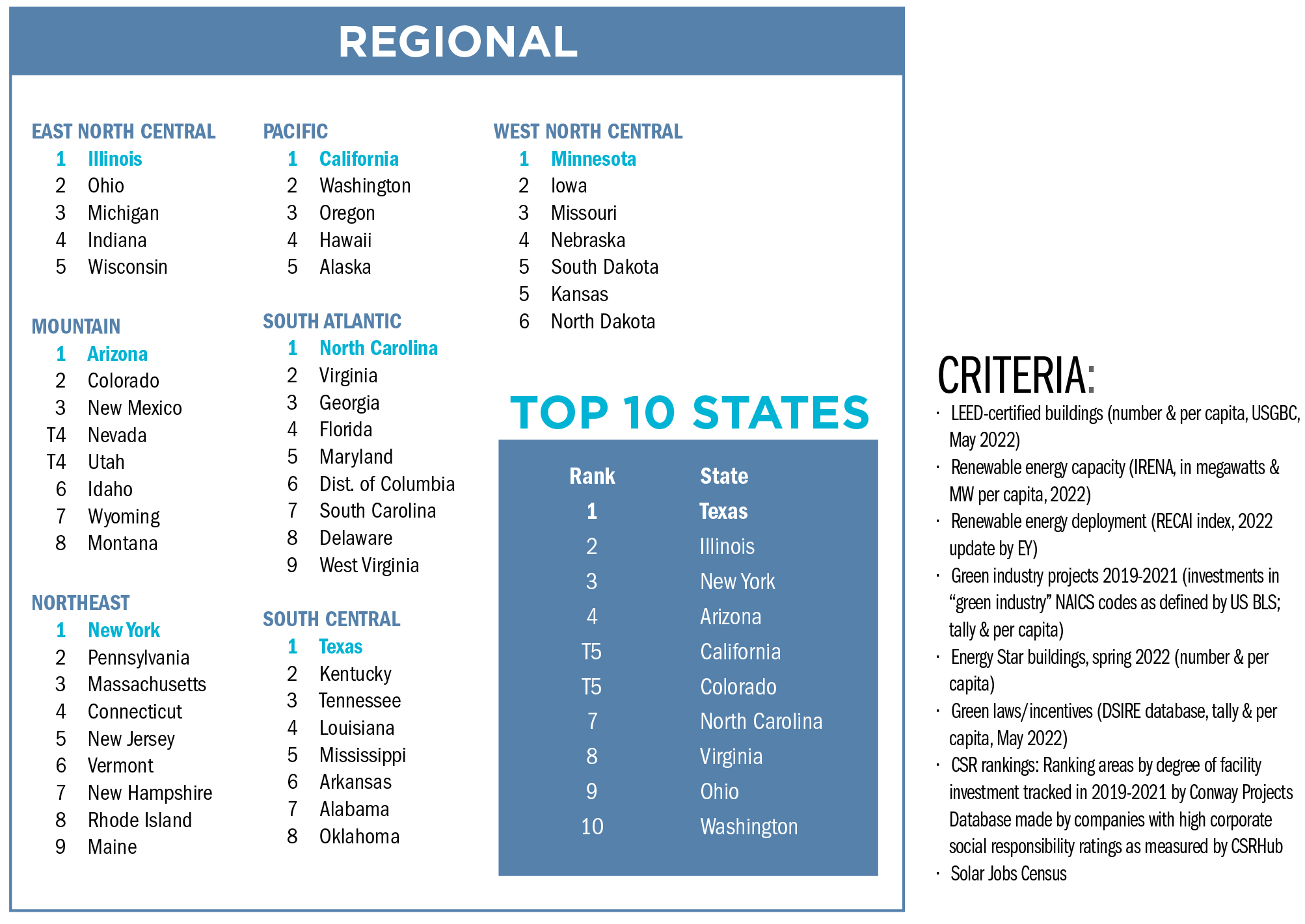 “In the past, being ‘green’ was a box for a business to check rather than an objective financial standard for value creation,” Ellis said upon the book’s release. Not anymore. Energy Star and LEED certifications have “played an important, if ultimately limited role in the evolution from Green to ESG by raising awareness of the need for, and definition of, sustainability in real estate,” he writes in the book. He continues:

“In the last few years, we’ve seen another, more seismic, advancement. The importance of sustainability and ESG (environmental, social, and governance) metrics for real estate investing has taken center stage. This is a radical departure from simply certifying a building as ‘Green’ or ‘not Green’ and calling it a day. Instead, the industry began to recognize there was no such thing as a ‘Green’ or ‘brown’ building. Every building on Earth exists on a spectrum. ESG, and the metrics behind it, help real estate owners measure the location of an asset or portfolio on that spectrum and act accordingly.

“Once thought of as fluffy, nice-to-have ideals, ESG and sustainability have been endorsed as the right way to evaluate business — especially in real estate. They proved to be effective leading indicators of an asset and portfolio’s financial prospects. Simply put: the more sustainable an investment, the better it would likely perform.

“Institutional investors have taken note. Last year Larry Fink, CEO of BlackRock — the world’s largest asset manager — told shareholders that sustainability had become the firm’s new standard for selecting investments. To Fink, it’s simple: ‘A company’s prospects for growth are inextricable from its ability to operate sustainably… Actions that damage society will catch up with a company and destroy shareholder value.’

“Fink and business leaders like him have come to a consensus that the business was missing something in the way that it measured performance,” Ellis writes. “The Miltonian doctrine that corporations exist to maximize shareholder value alone (distilled to share price) was deemed to be financially myopic.”

We’ve come a long way from early notions of Green real estate, Ellis says. “For decades, what it meant to be ‘Green’ was nebulous and the data to back it up was opaque. ESG today is an altogether different proposition. Spurred on by new technologies that make it possible to acquire, interpret, and apply ESG data, and propelled by the demands of sophisticated investors who demand insight into the true risks of real estate investing, ESG represents an evolution in the business and an imperative.

“I see a lot of real estate owners coming to ESG because they’re worried capital providers may penalize them,” he concludes. “But it’s more existential than that. If you’re unable to measure, manage, report and act on ESG, you will be out of business in 10 years’ time. What was once subjective, warm and fuzzy, nice-to-have — that is all now objective and essential. Real estate owners need to change their game and embrace the ESG Era. Their survival is on the line.” 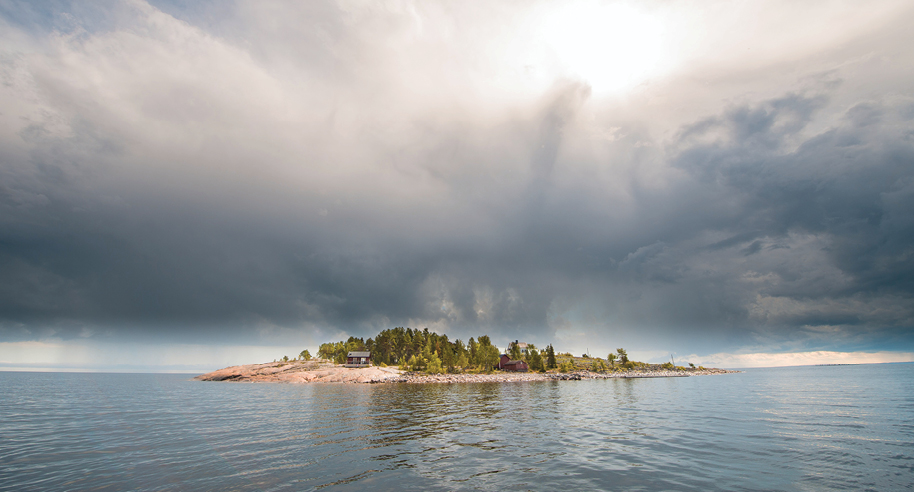 Hamnskär is an island located in the archipelago outside Skellefteå (where Northvolt commissioned a battery Gigafactory) in Swedish Lapland.
Photo Credit: Ted Logart/imagebank.sweden.se