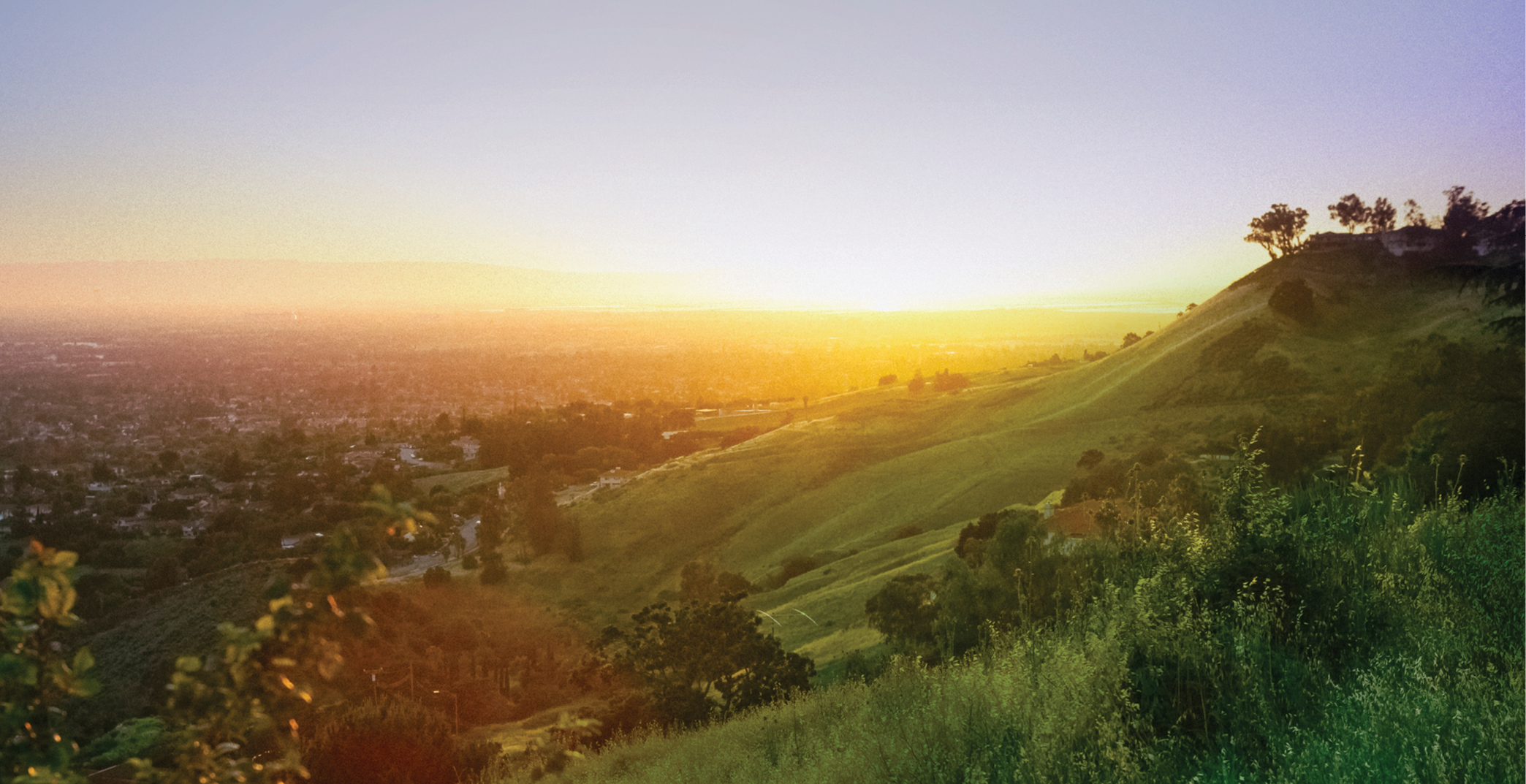 The sun never seems to set on the No. 1 ranking for Silicon Valley’s startup ecosystem.
Photo courtesy of San Jose Convention & Visitors Bureau

This year marks the 10th anniversary of the Global Startup Ecosystem Report produced by Startup Genome and the Global Entrepreneurship Network (GEN). The scope of the report’s analysis — based on 19 success factor indicators grouped under the headings of performance, funding, market reach, connectedness and knowledge — continues to expand, from 60 ecosystems as recently as 2018 to nearly 300 today. As in the past, Site Selection this year presents this excerpt of the report’s key findings, including its Top 30 ecosystems, runners-up and highlights from 100 top emerging ecosystems. For more information, visit startupgenome.com.

Just as two decades ago Silicon Valley reinvented the culture of place with open offices and spaces optimized for collaboration, so today’s startups are leading our new culture of placeless-ness. In the COVID-19 pandemic, tech companies both facilitated and pioneered new ways of working, including the virtual-first model, popularized by companies including Dropbox, which makes remote the default. Investment is also no longer tied to location, with some venture capitalists using Zoom to perform due diligence on far-flung investments, geographically expanding their reach.

However, by rendering talent and capital more fluid, technology has paradoxically made geography more important than ever. Now that founders, talent, and investors can be anywhere, polestars like Silicon Valley, London, and Beijing must compete with hundreds of expanding constellations, each with its own legal, economic and lifestyle advantages.

Here are the key findings of the Global Startup Ecosystem Report 2022:

This year’s ranking is perhaps Startup Genome’s most interesting to date, with a multitude of ecosystems showing significant movement, and two key themes emerging: the rise of India and the slowing of China’s growth in early-stage funding compared to other ecosystems.

India’s ecosystems show overall growth in Ecosystem Value, and collectively Delhi, Mumbai, Bangalore, and Pune generated 25 unicorns between 2019 H2 and the end of 2021. Regardless of this growth, North America continues to dominate the Global Rankings, with 47% of the top 30 ecosystems in this region. Asia is next with 30%. In North America in 2021, exits over $50 million made up a total of $698 billion. In Asia, exits over $50 million made up $531 billion.

Silicon Valley is undoubtedly still the world’s global leading ecosystem, but its share of early-stage investment by dollar amount has declined from 25% in 2012 to 13% in 2021. As early-stage funding is a leading indicator of the future of tech, this trend suggests that the growth of tech in the rest of the world will continue to be faster than in Silicon Valley. Silicon Valley’s share of number of exits over $1 billion has also halved since 2012.

New York and London remain leading tech hubs, and their joint position at No. 2 largely derives from strong scores in Knowledge in both ecosystems. Los Angeles holds its place at No. 6 but shows a significant increase in Connectedness this year. Tel Aviv also held steady from last year, remaining at No. 7. The Israeli ecosystem saw three $1 billion exits in the period examined, crossing $100 billion in total Ecosystem Value this year.

Thanks to five $1 billion+ exits, Seoul has moved into the top 10 for the first time. The Korean ecosystem has moved up an impressive 10 places since 2020 and six spots from 2021. Its biggest exit, e-commerce platform Coupang’s March 2021 $60 billion IPO, makes up approximately 42% of its Ecosystem Value.

India is showing significant changes in this year’s ranking. Delhi has moved up an impressive 11 places, coming in at No. 26, the first time that the ecosystem has entered the top 30 and a result of increased early-stage funding and three $1 billion+ exits. Bangalore is just ahead at No. 22, an increase of one place from last year. The ecosystem saw eight $50 million+ exits — three more than in the GSER 2021 period — and improved in Market Reach.

Mumbai isn’t far behind, up to tied for No. 36 this year thanks to two new unicorns and three $1 billion+ exits in the GSER 2022 time period, increasing its overall Ecosystem Value.

Chennai, and Kerala climbed the rankings significantly— up by 21 places and 20 places, respectively — and Pune and Hyderabad also added to India’s overwhelmingly successful year.

Berlin confirms its place as a leading European ecosystem by moving up six places from last year, to No. 16, with five $1 billion+ exits. The German capital has now produced 14 unicorns.

On the other side of the Atlantic, San Diego moved up eight places from last year’s ranking, to No. 13. Its strong life sciences sub-sector was a major element in the change, contributing three of its four $4 billion+ exits and many of its 25 $50 million+ exits. 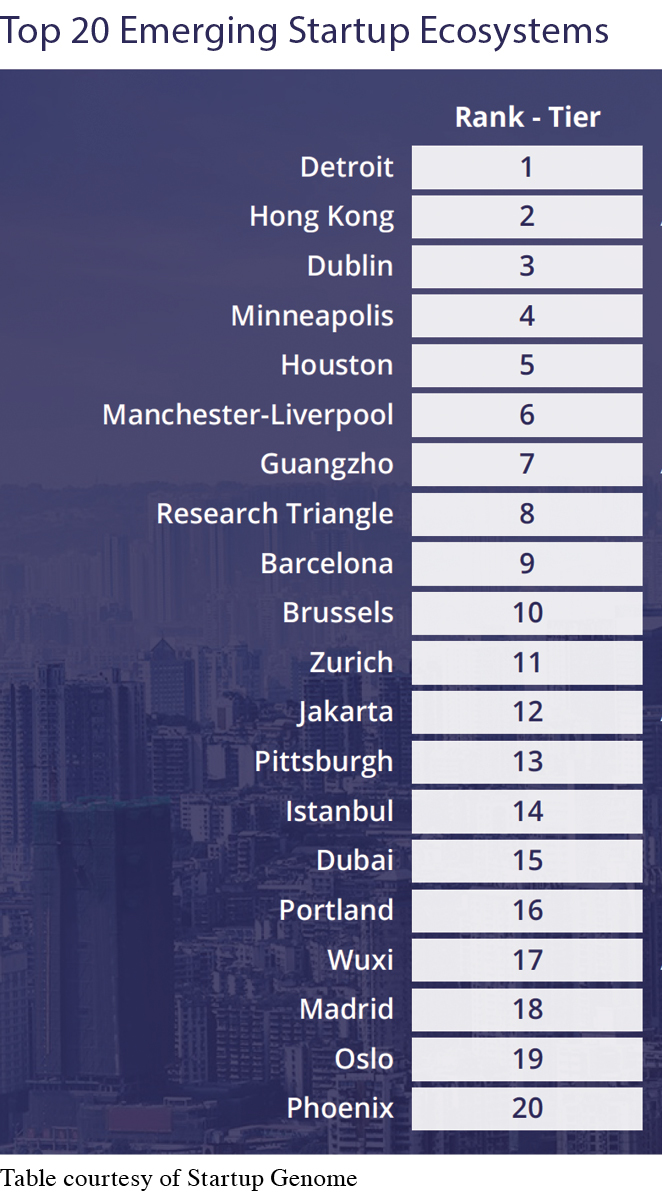 Highlights from the Top 100 Emerging Ecosystems

Emerging ecosystems are startup communities at earlier stages of growth. These key findings showcase the strengths in these ecosystems that have high potential to be global top performers in the coming years:

The top 100 Emerging Ecosystems are collectively worth over $1 trillion in Ecosystem Value, which is a 96% increase from last year.

WHY THE NEXT SILICON VALLEY WILL BE BORDERLESS: Rather than try to build the next Silicon Valley, why don’t you try to create something better? (Dec 19, 2018)