West Virginia to World: ‘We’ve Got Your Back.’ 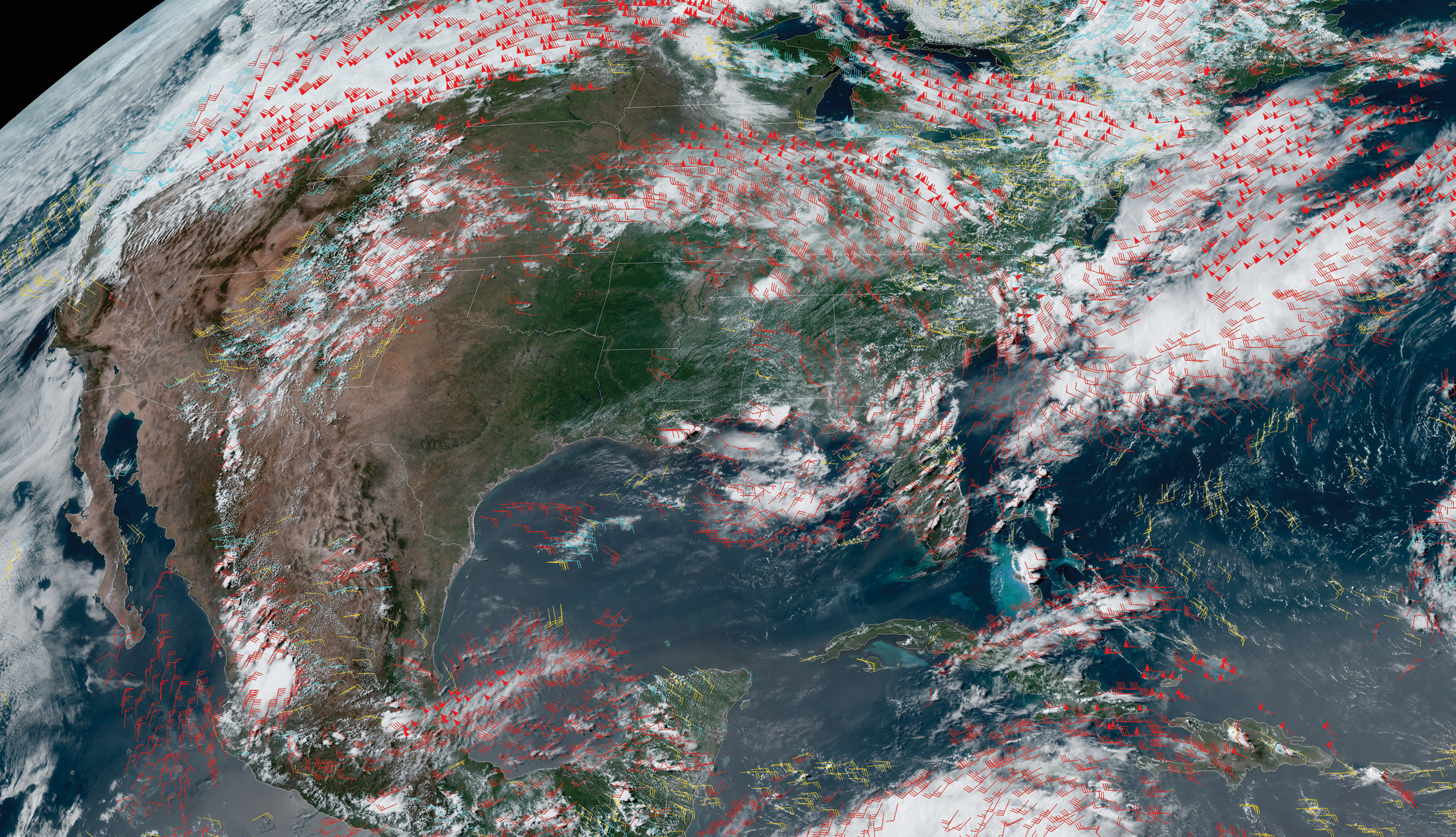 Look real close at this image from a NOAA satellite taken in June and you can see the potential for the  I-79 Technology Park to grab a piece of the $7 billion commercial climate and weather data marketplace.
Photo courtesy of NOAA
by Adam Bruns
W

hen the National Oceanic and Atmospheric Administration (NOAA) sent the third spacecraft in its Geostationary Operational Environmental Satellite R series into orbit this spring, Cape Canaveral got the launch glory. West Virginia got the goods.

The deliverables of the program — an unprecedented spectrum of data about our planet’s climate and weather — are making landfall every day at NOAA operations in Virginia and West Virginia.

NOAA’s Combined Backup Unit (CBU), as well as a supercomputer and cybersecurity operation, are based at the I-79 Technology Park in Fairmont, located in north-central West Virginia, where a new parabolic backup pilot antenna was rising into place at the same time that satellite was doing the same. NOAA’s operations and sites from a host of major federal government agencies — the FBI, NASA and the Department of Commerce among them — together with companies at the park are forming a cluster that could become a hub for the emerging $7 billion commercial climate and weather industry.

Nearly 50 companies contracted with NOAA work out of the Fairmont location, many of them through major contractor Leidos, which among other contracts won a $100 million contract related to the NOAA cybersecurity operation. Indeed, Leidos, which also maintains a significant presence in Morgantown 30 miles to the north on I-79, was looking to fill 15 positions in Fairmont as summer 2022 arrived.

“Think about everything that is happening right here at your fingertips,” West Virginia Governor Jim Justice said in October 2019 at the groundbreaking for the park’s next phase of growth, helped by a state Abandoned Mine Land grant worth more than $3.9 million. “We’ve made a big-time commitment to your airport — a project that’s going to boom in this area beyond belief,” the governor said. “You’ve got Corridor H coming — the most important highway in the state. And now you’re going to build onto this tech park. It’s truly incredible.”

Backup for Your Backup

Believe it, says Jim Estep, a West Virginia native who’s served as president and CEO of the High Technology Foundation since summer 2000, leading the mission to diversify north central West Virginia’s economy and catalyze the growth of the knowledge sector. During his tenure, the park has expanded to almost 400 acres and over 800,000 sq. ft. of Class A office and lab space.

The I-79 Technology Park in Fairmont is home to more than 30 businesses and organizations, including General Dynamics, FirstEnergy Corp., Leidos, ManTech International Corp., Northrop Grumman, and the National White-Collar Crime Center.

“We are not your typical business or tech park,” he says, noting the state’s historically undiversified economy and educational attainment. The Foundation is turning things around by recruiting federal operations to the park and region that are STEM-oriented, technical in nature and come with a significant amount of contracting opportunities. Building up that density of operations means building up an unprecedented level of infrastructure too, as in 400 gigabytes per second of telecommunications capacity and the park’s very own substation from First Energy subsidiary Mon Power.

Estep says north central West Virginia allows federal agencies and their associated contractors to diversify their locations and spread the risk away from D.C. in the name of continuity of operations. The I-79 Technology Park is NOAA’s designated backup HQ if something goes wrong in D.C. Other organizations are looking at doing the same, in part because going up and over the Appalachians puts them safely into another watershed and power grid. It also allows them to avoid the high prices. “The cost of operations in the D.C. area is escalating crazily,” Estep says, whereas in Fairmont, “in some cases, we actually give away land for free to federal operations.”

Fairmont is just far enough away to avoid D.C.’s issues, but not so far away the travel is excessive: “You can take I-270, 70, 78 and 79 and be here in three to four hours,” he says. Not to mention the area’s claim to the biggest runway in West Virginia at the North Central West Virginia Airport and the expanding possibilities of Corridor H (U.S. Highway 48), the last remaining section of the Appalachian Development Highway System that when complete will stretch 130 miles across the mountains from I-79 at Weston into Virginia and the junction of I-66 and I-81, opening up economic development opportunities.

Back at the I-79 Technology Park, the corridors to new development are made of petabytes of NOAA-driven data. Estep says one of the biggest purchasers of this is the financial sector. “The new satellites that NOAA is launching collect 40% more data than the old ones,” he says. “All of this data passes through the I-79 Technology Park.

NOAA a few years ago signed onto strategic relationships with Amazon Web Services (AWS), Microsoft and Google to place their data sets on those companies’ cloud platforms, where they could build tools for analytics and sell data access.

Estep says it’s happening slowly but surely, as the data transference moves from a nearly manual process to automation. Meanwhile, the State of West Virginia is backing the installation of fiberoptics to every building and pad in the park, so that companies can plug directly into the cloud service provider and have a dedicated high-speed line they won’t have to pay a mint for. The data center opportunity is obvious.

“These pieces are inching together,” says Estep of the overall infrastructure enrichment. “The system is going to take a couple of years to refine. It’s all coalescing.”

The high-tech approach helps NOAA achieve its goals, drives customers to the cloud providers and “positions north central West Virginia at the epicenter of what the U.S. Department of Commerce has predicted to be a doubling of that $7 billion commercial climate and weather industry,” says Estep, with the impact reverberating even up into southwestern Pennsylvania.

“It really creates,” he says, “an incredible opportunity.”

This Investment Profile was produced under the auspices of The High Technology Foundation. For more information, visit wvhtf.org.