ow do you measure the impact of bioscience innovation in a market? Is it done through metrics like federal research grants and patents filed? Is it done by counting industry expansion projects, capital investment totals and jobs created? Or is it measured in other ways?

Perhaps it’s done best by counting the number of lives saved and measuring the improvement in quality of life among patients battling chronic disease.

Whichever metric you choose, there’s no debating that one of the most impactful bioscience markets in the world today resides in the Columbus Region of Central Ohio.

Ask a dozen people when this capital metro area of 2.2 million people reached the tipping point as a powerhouse in life sciences, and you’ll likely get a dozen different replies. This talent-rich bioscience corridor was already a major difference-maker a decade ago, but in the last 12 months, the Columbus Region set itself apart.

Expansions from Amgen and AmplifyBio made sure of that. Global biopharmaceutical manufacturer Amgen picked New Albany, Ohio, on June 28, 2021, as the location for a $375 million drug manufacturing and packaging complex that will employ 400 high-wage workers. On May 23 of this year, AmplifyBio, a biotech contract research organization, picked New Albany for a $150 million complex that will place over 100 highly paid workers doing research and development in a new 350,000-sq.-ft. facility.

“Based on location, incentives, readiness of the land and the diversity we have in Columbus, it was decided to buy this land in New Albany, Ohio.”

They’re not alone. Across the region in communities like West Jefferson, Dublin, New Albany, Lancaster, Marysville, Plain City and other towns, biotech firms, CROs, healthcare startups and other biomedical businesses are ramping up to meet the challenges posed by cancer, chronic disease, COVID-19, hereditary illness and other maladies.

Companies like Andelyn Biosciences, Forge Biologics, Sarepta Therapeutics, McKesson, AstraZeneca and Cardinal Health are expanding their footprint throughout the region while adding thousands of highly skilled and highly educated workers.

It starts with an Ohio healthcare network that employs more than 81,000 people working in fields of bioscience innovation and awards more than 11,000 bioscience degrees each year. In the Columbus Region, this network is anchored by several key players. Among them are The Ohio State University and its Wexner Medical Center, Nationwide Children’s Hospital, Battelle and Sarepta. Battelle is the world’s largest contract R&D organization, while Wexner is a medical research giant with more than 20 centers and institutes conducting more than 1,000 active research studies in just about every medical specialty.

The rankings, accolades and attributes go on, but the best way to gauge the region’s staying power is to talk to industry leaders. We did that, and what they had to say was eye-opening.

Sandra Rodriguez-Toledo, vice president of Amgen, says the global pharmaceutical giant chose the Columbus Region because it checked every box for the $26 billion company. “We will be assembling, labeling and packaging medicines that Amgen is manufacturing across the world,” she says. “From Puerto Rico, the Netherlands and other sites, we will be receiving bottles, syringes and around 21 different products to support patients around the U.S. We acquired about 175 acres. We are only using 50 now, so we could expand in the future.”

Rodriguez-Toledo says 180,000 sq. ft. with seven manufacturing lines should be operating 24/7 by the first quarter of 2024. “This will be a state-of-the-art facility with the latest technology,” she says. “It will have A.I. and be able to make quick decisions using real-time data.”

The site selection process lasted eight months and took a deep dive into 12 locations around the U.S., says Rodriguez-Toledo. “Back in 2021, we did an evaluation of different states. Based on location, incentives, readiness of the land and the diversity we have in Columbus, it was decided to buy this land in New Albany, Ohio,” she says. “It is very important that we are ready by the first quarter of 2024 to supply our patients with the medicines they need every day.”

Headquartered in Thousand Oaks, California, Amgen employs 22,000 workers worldwide and ranks as one of the world’s largest independent biotech companies.

AmplifyBio is smaller but still packs considerable punch. Its recent expansion creates a total of 263 jobs across multiple sites in the region. The company said it is expanding to meet growing demand for advanced drug therapies, including cell and gene therapy products. 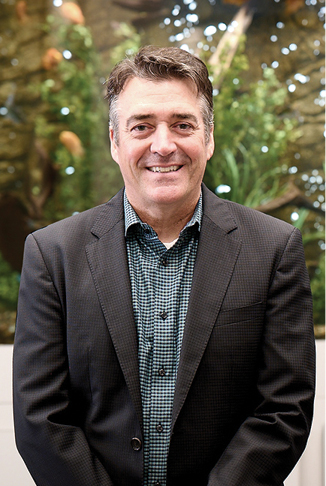 “With what Columbus has to offer, it is amazing. The cost of living here is a major advantage.”

“We are excited to expand our presence in the Columbus Region, and specifically New Albany,” said J. Kelly Ganjei, president and CEO of AmplifyBio. “We believe that our innovation platform is a perfect fit for the collaborative environment that I first noticed when I came to Ohio. Our partners, collaborators and clients view working in the region as a phenomenal opportunity, and we are convinced that our business model will continue to drive more innovative developers in the area.”

AmplifyBio is a $200 million startup that focuses on developing next generation therapies. The firm was created on May 3, 2021, when it was spun out of research giant Battelle in Columbus. AmplifyBio operates on its own 30-acre tract within Battelle’s campus in West Jefferson.

Another breakthrough organization in Columbus is Sarepta Therapeutics Inc., a medical research and drug development company with corporate offices in Cambridge, Massachusetts. It has 840 employees and revenue of $700 million.

When we asked Sarepta senior vice president Gary Charbonneau why his firm picked Columbus for an expansion, he said, “There are many reasons. Access to talent at The Ohio State University. Our relationship with Nationwide Children’s Hospital. And other factors. The government support that we receive here has been fantastic. One Columbus helped us navigate economic development incentives packages through JobsOhio. Lt. Gov. Jon Husted has the working group Innovate Ohio, and they produce recommendations for talent development. That is a big factor in attracting a firm like Sarepta to this market.” 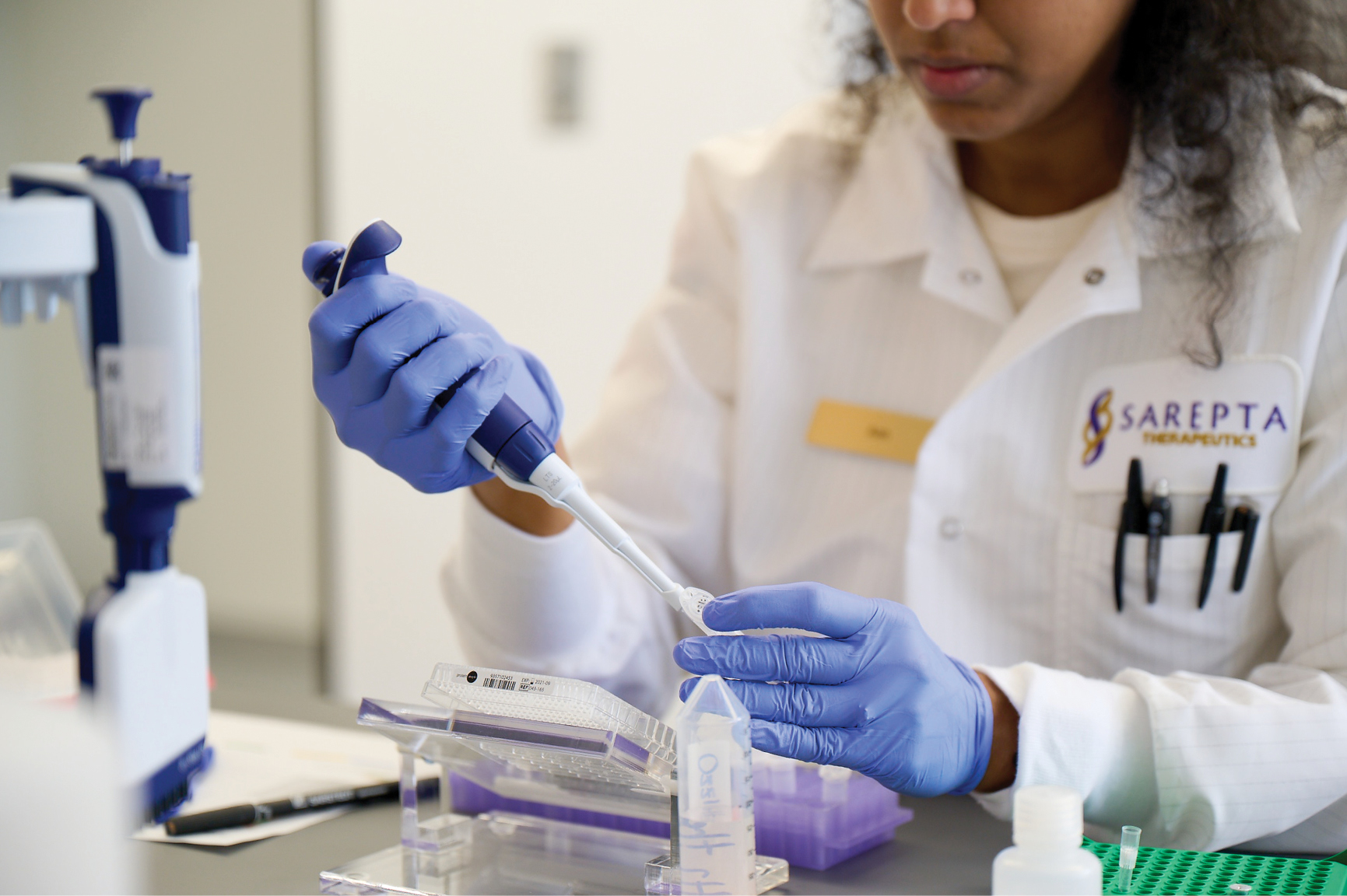 Sarepta hires graduates from The Ohio State University and other colleges in the Columbus Region.

When asked to name the region’s best assets for companies doing business in the life sciences sector, Charbonneau said, “I came here a couple of years ago. Columbus is a really nice city. It has 200 miles of trails throughout the city. It has a vibrant downtown. With what Columbus has to offer, it is amazing. The cost of living here is a major advantage. I was thinking about all the firms that have started here in the last few years like AmplifyBio, Forge Biologics and others. A rising tide lifts all boats. We want more biotech ventures to join us here. The rising talent is here. Attracting seasoned drug development talent from outside the market will help us grow.” 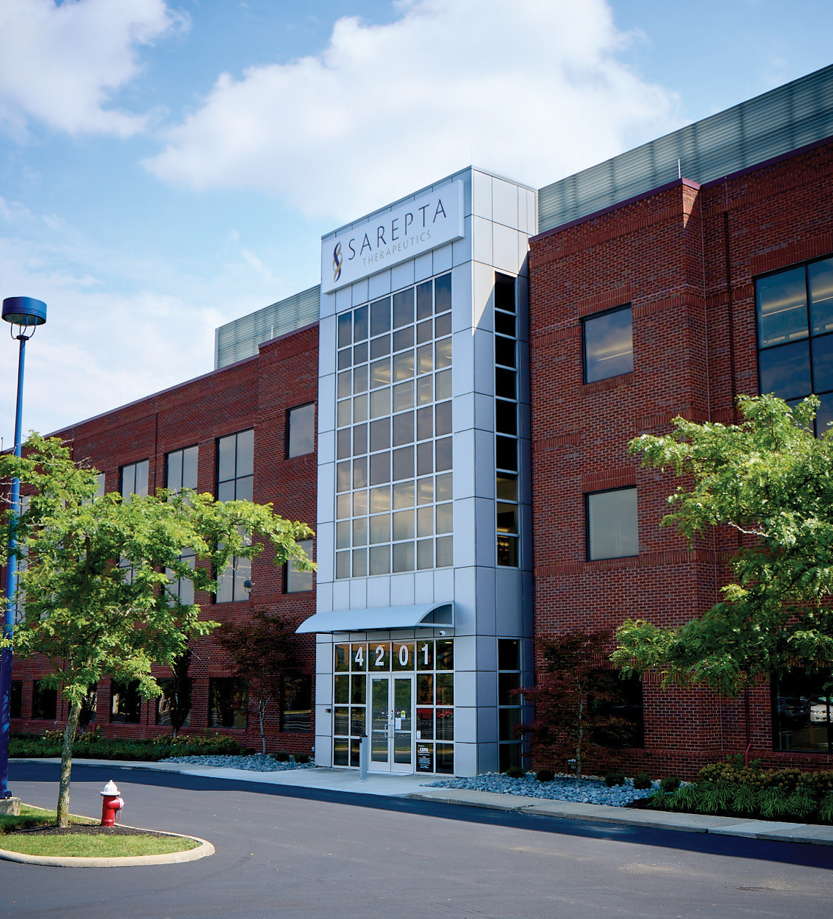 Sarepta recently celebrated the grand opening of its new 85,000-sq-.ft facility near Easton Commons in Columbus.

He adds that OSU is “a huge attraction for us. We also are one of the more well-established biotech companies here. About 50% of our talent comes from outside the area. One Columbus and JobsOhio are getting the word out. We are having good success in that space — getting people to move here. The COVID-19 pandemic woke a lot of people up to the ability to get out and have more open space and a better cost of living. The Great Resignation is due to the fact that people want something better. They are finding that in Columbus.”

Sarepta just celebrated a grand opening last fall for 85,000 sq. ft. near Easton Commons. “We just embarked on the next phase of 54,000 sq. ft. of lab space in the adjacent building,” says Charbonneau. “That will add another 100 employees. We will be close to 250 people on site in the next couple of years. People that come here really like staying in the Easton Town Center.”

Matt McQuade, managing director of business development for One Columbus, says that while the recent flurry of investment projects garners headlines, this wave is not the result of an overnight success.

“Amgen is a transformational project, but it is also the culmination of a couple of decades of building capacity in the region,” McQuade says. “This dates back nearly two decades to gene therapy research conducted at Nationwide Children’s Hospital. That research has led to the growth in cell and gene therapy we’re seeing in Columbus today, which, in part, gave the Columbus Region visibility to a company like Amgen.”

A Success Two Decades in the Making

McQuade cites the success stories of AmplifyBio, Sarepta, Andelyn and Forge Biologics as examples of wins emanating out of that nucleus.

“We realized that we had something special going on in gene therapy, so we decided to do a competitive assessment with Deloitte,” says McQuade. “We wanted to know how we compared against other cities. How do we compete on talent and in other areas against Boston, Houston, the Research Triangle, San Francisco, etc.? We were building up our case for biotech.”

Along came the opportunity to compete for a confidential site selection opportunity — or what would eventually be made public as Amgen. “We only discovered late in the process that it was Amgen. It was down to us and one other location,” says McQuade. “The cell and gene therapy innovation that had been occurring here, along with Deloitte helping to provide the perspective on how the Columbus Region’s assets compared to other hot spots, put us in a better position than ever to compete. Having that understanding combined with a great economic development team and phenomenal site led to Amgen selecting the Columbus Region for this transformational project.”

McQuade says Columbus has a great story to tell and a great team representing it. He adds that the focus moving forward will be on shared prosperity and leading the nation in access to opportunity regardless of circumstances. Metrics like livability and equality of opportunity will become regulars on the dashboard.

In other words, measuring success will always be like trying to hit a moving target — but at least now Columbus has tangible evidence that it is moving in the right direction.