Where Vertical Farming Is ‘Smart’ 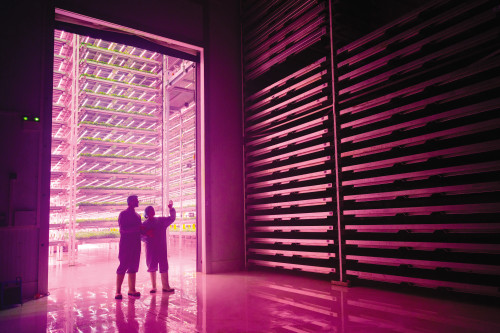 Bowery Farming, a leading vertical farming company based in New York City, plans to open smart indoor vertical farms in Locust Grove, Georgia, and Arlington, Texas, it announced in January. Each facility will create more than 100 jobs, and they are to be powered by 100% renewable sources. The company supplies greens and herbs to more than 800 U.S. grocery stores and such e-commerce platforms as Amazon, Walmart and Whole Foods Market.

“We’re thrilled to announce our expansion beyond the Northeast and into the Atlanta, Georgia, area,” said Irving Fain, CEO and Founder of Bowery Farming, at the Locust Grove announcement. “Our smart indoor farm in Locust Grove will showcase Bowery’s technology leadership and innovation from seed-to-shelf. It’s a significant step in addressing the critical challenges of the current agricultural system and working toward wider access to fresh, local pesticide-free produce, year-round.”

From Locust Grove, about 35 miles south of Atlanta, the company will supply customers within a 200-mile radius. The Arlington farm, near Dallas, will also serve a 200-mile-wide market.

In May 2021, Bowery Farming opened what it calls Farm X, a state-of-the-art innovation hub for plant science in Kearny, New Jersey, adjacent to its original R&D Center of Excellence and first commercial farm. Farm X, according to the company, is “one of the largest and most sophisticated vertical farming R&D facilities in the world and will further accelerate the commercialization of products specifically designed for Bowery’s indoor system.”

Farm X has a sensory lab with an on-site breeding program to develop varieties that thrive in its unique growing conditions, among other functions. The company says Farm X also serves as an experimental space for innovation in farm design, data science, computer vision, autonomous robotics, hardware and software that can be deployed in Bowery’s growing network of commercial farms.

Elsewhere in the vertical farming world, aquaponic vertical farming company Upward Farms is building what it says will be the world’s largest vertical farm in its network. The 250,000-sq.-ft. facility in Luzerne County, Pennsylvania, will open in early 2023, supplying providing “fresh, locally sourced microgreens and sustainably raised hybrid striped bass to consumers throughout the Northeast and beyond.” The farm will employ more than 100.

Upward Farms says its new facility will be two to four times the size of the next largest vertical farms operated by other companies and that its farms reduce water and land use by 95%. The company’s six-acre facility will conserve more than 100 million gallons of water and more than 120 acres of land on an annual basis and eliminate 1.7 million food transportation miles per year.