The No. 4 state in the Governor’s Cups ranking is just getting started. 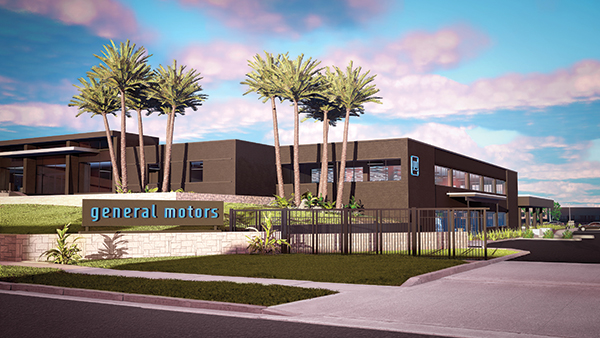 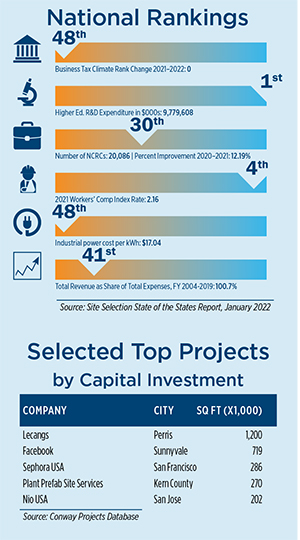 Whether you love or hate the Golden State, you simply cannot ignore the fifth largest economy in the world and the power it has over global trends. Perhaps it’s a symptom of the Hollywood effect: Any business choosing to leave the state grabs headlines in much the same way a celebrity break-up would.

While it’s true that California has had a few public business break-ups, there have been even more stories representing the state’s successes. Consider California’s rise to No. 4 in our annual Governor’s Cups rankings — up from No. 16 in 2020. Behind the state’s climb through the rankings is a well-planned (and funded) strategy to foster innovation and support emerging industries.

“There is a saying that goes ‘There are three sides to every story: your side, their side and the truth’” says Robin Reimold, president and CEO of Team California. “The story of our demise just isn’t true. As the fifth largest economy in the world, California has the best economic climate and better access to venture capital than anywhere else in the nation. Starting a business in California is a great choice for entrepreneurs and those looking at FDI. 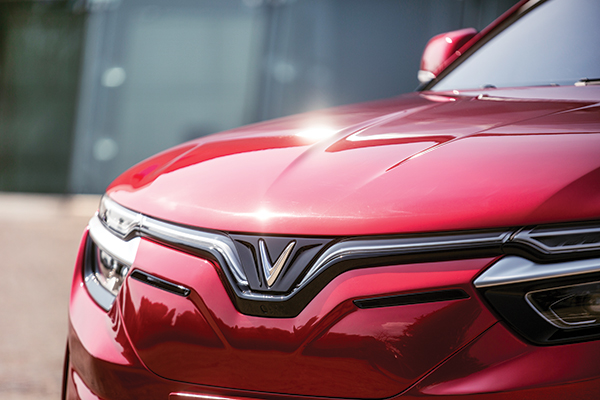 The new headquarters of Vietnam-based EV maker VinFast will be located in Los Angeles, as the company searches the nation for a battery manufacturing plant location.

“We have the numbers to back it up,” she says. “According to the INC 5000, California is home to 682 of the 5,000 fastest-growing companies in America. Texas comes in with 428, and Florida has 369. If an innovative business wants to grow, California is a top choice — the numbers don’t lie.”

Reimold points to several key incentives that are helping attract newcomers to the state and encouraging companies to expand, including the California Competes Tax Credit (CalCompetes), which is available to businesses that want to relocate, stay, or grow in California. The credit offers $140 million in tax credits and $120 million in grants to businesses that are expanding and adding quality, full-time jobs in California. She also points to workforce and manufacturing incentives — like the Employment Training Panel and Manufacturing and Research & Development Equipment Exemption — and grants, programs and incentives offered regionally and by municipalities.

In November, the Governor’s Office of Business and Economic Development (GO-Biz) announced more than $150 million in CalCompetes credits connected to company projects creating more than 7,600 new full-time jobs and representing more than $1.2 billion in new investments over the next five years.

According to GO-Biz, Infinity Energy Inc. in Fresno received a $2.5 million credit to establish a manufacturing facility in Fresno for solar-powered electric vehicle charging stations that will create 209 new full-time jobs. In exchange for a $25 million credit, EnerVenue, Inc. of Fremont will be creating at least 1,692 full-time jobs to develop and manufacture super high-capacity nickel hydrogen batteries. These batteries could be used by large venues such as hospitals to keep electricity flowing during power outages. The batteries also can store large amounts of solar or wind-generated electricity to enable homes, businesses and other venues to rely 100% on green, sustainable energy even when the sun isn’t shining or the wind isn’t blowing.

EnerVenue launched in 2020 out of EEnotech, a materials-focused startup foundry located in Sunnyvale that incubates and accelerates nanotechnology-driven solutions to water purification, grid-scale energy storage, smart wearable textiles, and other energy and environmental problems. California’s prominence in the clean tech movement ensures that innovative businesses are in good company. According to GO-BIZ, California saw over $6 billion in venture capital investments in clean energy technologies in 2020 — more than the combined total of the other top 10 states.

A key component of Newson’s Blueprint is focused on “forging an oil-free future.” The plan calls for a decrease in the state’s reliance on fossil fuels and preparation of the workforce and economy for a growing clean energy industry.

The Blueprint’s investments in transportation and infrastructure call for $9.1 billion in funding for climate-friendly clean transit projects that will create thousands of jobs. The Blueprint also includes $2.3 billion to support ports and goods movement throughout the state and an additional $6.1 billion to accelerate the state’s transition to zero-emission vehicles — creating a total package of $10 billion that will invest in affordable cars, clean trucks and buses.

According to GO-BIZ, California saw over $6 billion in venture capital investments in clean energy technologies in 2020 — more than the combined total of the other top 10 states.

According to Go-Biz, the investments would include:

According to the governor’s office, transportation is the state’s largest source of greenhouse gas emissions, accounting for more than 50% of emissions when considering the production and deployment of fuels. In 2020, the governor announced a requirement that sales of all new passenger vehicles be zero-emission by 2035 and worked to decarbonize heavy-duty vehicles including trains, trucks and buses. Electric vehicles have become one of the state’s top exports, and California represents half of the United States’ ZEV market. 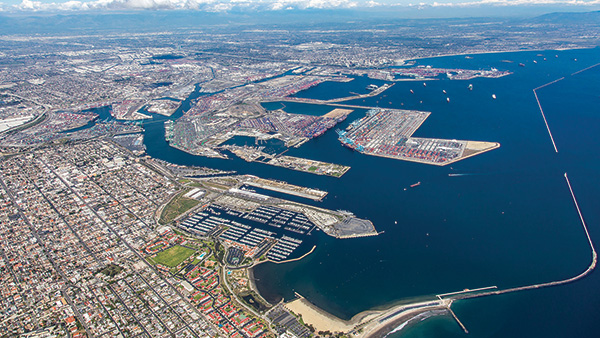 Photo courtesy of the Port of Los Angeles

According to a 2021 California case study by the Environmental Defense Fund, the Golden State leads in the nation in the production of medium-to-heavy-duty zero-emission vehicles with at least 128 companies in 181 locations across the state. Of these companies, 86 are headquartered in the state and employ over 44,000 people. The report also indicated the industry is growing, with more than $3.8 billion in corporate investments over the last seven years.

California EV companies and startups are making headlines with their innovative new technologies and designs. Electric vehicle startups like Karma, Rivian and Lordstown Motors have planted their flags in Southern California, along with global giants like General Motors.

In September, General Motors announced plans to invest $71 million to establish a new campus in Pasadena. According to GM, the facility’s relocation from its existing space in North Hollywood to the nearly 149,000-sq.-ft. campus will make room for expanded advanced technology teams to help accelerate GM’s goal of zero crashes, zero emissions and zero congestion. The new site is closer to technology centers on the West Coast and creates a recruiting opportunity with its proximity to leading universities and design schools.

"Having a physical presence in Southern California’s technology epicenter is an integral part of our global design operations, and this new innovation campus will not only expand our operations twofold but offers access to the rich cultural diversity and talent in the region."

“Having a physical presence in Southern California’s technology epicenter is an integral part of our global design operations, and this new innovation campus will not only expand our operations twofold but offers access to the rich cultural diversity and talent in the region,” said Michael Simcoe, GM vice president of Global Design. “Our positioning will allow us to attract dynamic candidates in fields that will bolster GM’s proven design capabilities and challenge conventional thinking of what our future portfolio of connected products and services can encompass.”

In November, EV company VinFast announced its headquarters would be located in Los Angeles. The move by VinFast — backed by Vietnam’s largest multi-disciplinary conglomerate Vingroup — is part of a global expansion that includes the introduction of an all-new lineup of EVs in the U.S., Canada and Europe starting in 2022.

VinFast’s decision was partly due to a $20.5 million tax credit awarded by the California Governor’s Office, and builds on the company’s investment of more than $200 million in its initial phase in California, creating over 1,000 new, full-time jobs statewide. Additionally, VinFast was awarded the California Competes (CalCompetes) Tax Credit by the California Governor’s Office of Business and Economic Development (GO-Biz). The company is one of just a few foreign enterprises to receive the credit. VinFast’s award is the largest CalCompetes tax credit ever awarded to an automotive company and one of the top 10 largest awards given to any company in the program’s nearly 10-year history.

“California is aiming to lead the U.S. in clean energy, according to S&P Global. Regarding its policies, California has firmly focused its support for the EV market by directly benefiting consumers and plans to stop selling gasoline-powered cars after 2035. Therefore, setting up an office in California will be a good start to expand our market in the US,” explains VinFast U.S. CEO Van Anh Nguyen. “Along with the launch of car models in the U.S., VinFast will open 60 VinFast stores in California in 2022. In the near future, we also intend to open VinFast Stores in a number of U.S. states. VinFast also plans to open a U.S.-based manufacturing plant to build electric vehicle battery cells and packs before the end of 2024. We are currently exploring potential sites and will have more information shortly.”

Since his signing of the executive order in October, several key steps have been taken to ease supply chain congestion, including a strategic partnership between the California State Transportation Agency (CalSTA) and the U.S. Department of Transportation (USDOT) to offer $5 billion in financing to support supply chain resiliency projects. The state is also issuing temporary permissions allowing trucks to carry increased loads, doubling the Department of Motor Vehicles capacity for commercial driving tests and securing additional sites for storing shipping containers.

“The ongoing supply chain crisis requires an all-hands-on-deck approach, as we work with our partners to meet the needs of California’s families and businesses,” said Dee Dee Myers, director of GO-Biz. “By creating additional storage space for shipping containers, we can relieve some of the congestion at our ports, keep our imports and exports flowing and strengthen our economy.”

Electric vehicles have become one of the state’s top exports, and California represents half of the United States’ ZEV market.

All of this comes as the Port of Los Angeles announced its busiest January in its 115-year history. The port processed 865,595 TEUs that month, a 3.6% increase compared to last year and a new milestone for a Western Hemisphere port.

“Many of the key data points that track the number of containers moving off our docks — and how quickly they depart — have improved significantly in recent weeks,” said Port of Los Angeles Executive Director Gene Seroka. “Our record-breaking January reflects the great efforts of our longshore workers, truckers and terminal operators as we continue to focus on additional operational efficiencies in the months ahead.”

According to the Port of Los Angeles, it is North America’s leading seaport by container volume and cargo value and facilitated $259 billion in trade during 2020. San Pedro Bay port complex operations and commerce facilitate one in nine jobs across Los Angeles, Orange, Riverside, San Bernardino and Ventura counties.