The Northwest Ohio community aims to help manufacturing and a whole lot more advance to the next level. 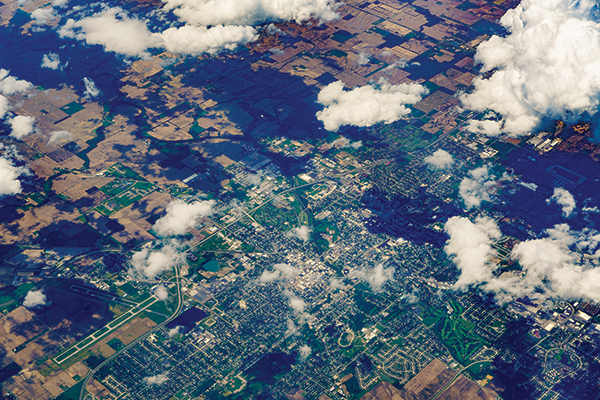 Findlay, Ohio, is the nation’s No. 1 micropolitan area for the eighth year in a row.
Getty Images
by Adam Bruns

Another year of deftly blending expansions by existing companies and new projects has driven Findlay, Ohio, once again to the No. 1 ranking among U.S. micropolitan areas in Site Selection’s annual tally of corporate facility investment.

It’s the eighth year in a row that Findlay has snared the top spot for project attraction among the nation’s 543 micropolitan statistical areas. Findlay also is one of eight Ohio micropolitans in the top 20 and 17 in the top 100 (see chart for full listing). Neighboring Indiana has 10 in the top 100, followed by North Carolina and Georgia with nine each; Nebraska and another Ohio neighbor, Kentucky, with eight apiece; Kansas with seven; and New York, South Carolina and Texas tallying six each.

If you examine the overall project tallies for each of those states in our annual Governor’s Cups rankings (see p. 62), these top states for micropolitans average out to a ranking of 9.7. In other words, small towns have big influence.

Those 17 Top Micros in Ohio accounted for 100 projects last year, or about 20% of the No. 2-ranked state’s total projects. And Findlay accounted for 24. Among them are projects from such companies as Amazon, Freudenberg-NOK, Hamlet Protein, cookie baker Hearthside Food Solutions, Sanoh Industrial, Valfilm, American Plastics, ZF (through a purchase of the former Veoneer facility), Whirlpool and beverage container manufacturer Ball Corp. 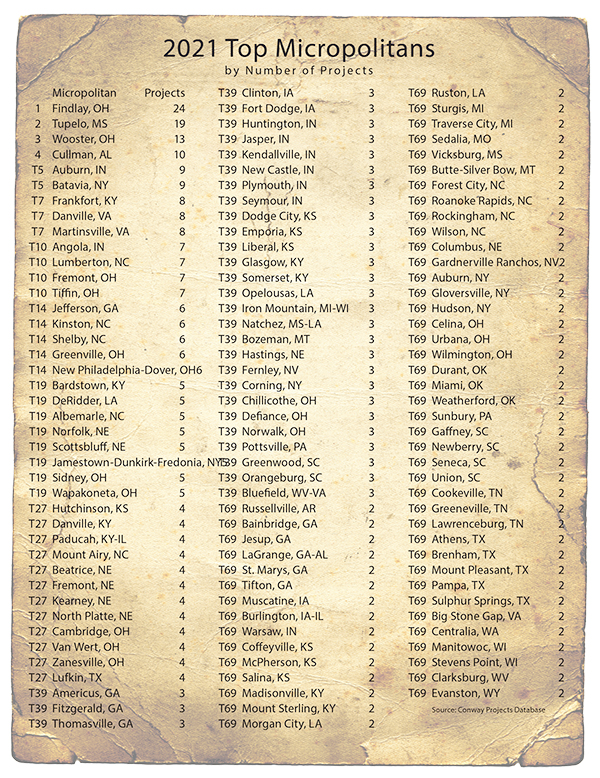 “For anybody in food packaging, plastics, food manufacturing or distribution, business has gone crazy because of Covid,” says Tim Mayle, director of economic development for Findlay-Hancock Economic Development. At the same time, steady investment has continued in the automotive supply chain, part of an overall advanced manufacturing trend in northwest Ohio that the Toledo-based Regional Growth Partnership says has led to 140 projects creating 5,425 jobs with $3.3 billion in investment over the past three years. 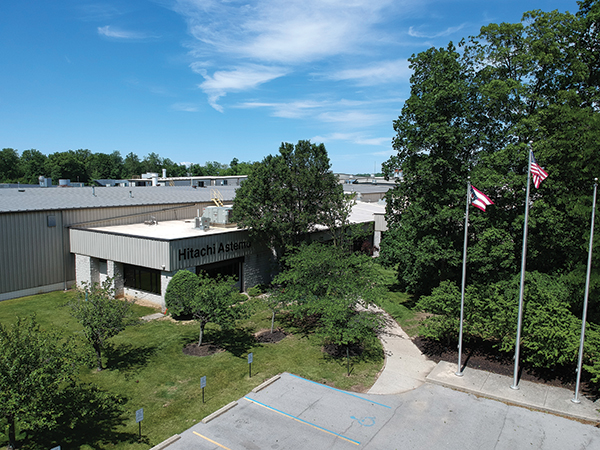 Hitachi Astemo is among the Findlay employers embracing data-driven advanced manufacturing and digitization. 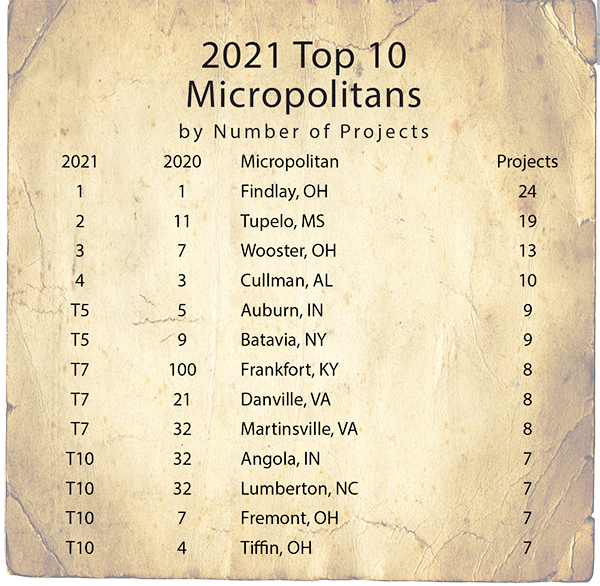 That trend was one reason Mayle told me last year at this time about talks among area colleges and university leaders focused on a new advanced manufacturing center. That project — the Center for Advanced Manufacturing and Logistics — was officially launched in November 2021 by representatives from Bowling Green State University, Owens Community College and the University of Findlay. According to the latter institution, the center aims to work with employers in those sectors “to identify and anticipate their immediate, mid-term, and long-term needs in workforce training, talent development, innovation, automation, systems integration, and supply chain management,” as well as serve as a resource for customized training solutions.

“This Center will serve as a model for northwest Ohio and beyond as more institutions of higher education look to power economic development in more meaningful and strategic ways,” said Dr. Dione D. Somerville, president of Owens Community College. Training and instructional programs will be provided in Findlay, Bowling Green and Perrysburg “and will range from on-degree track certificates and badges to degree track curricula for associate, bachelor’s, and post-graduate degrees,” the Center said. The Center will also facilitate co-op and internship opportunities. 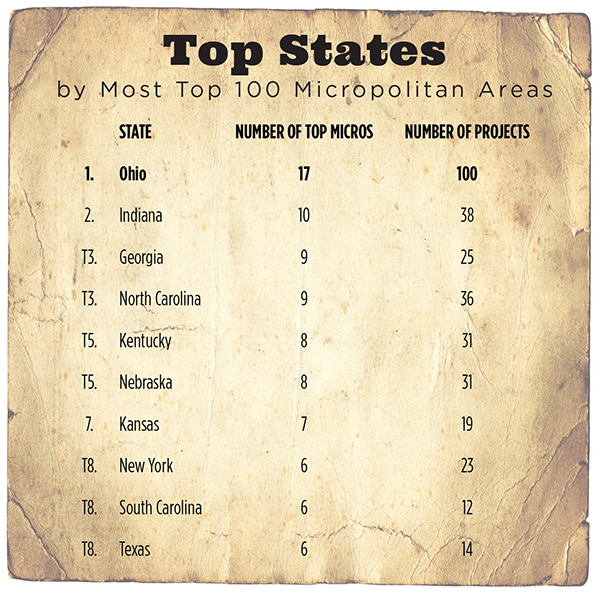 “The Center for Advanced Manufacturing and Logistics demonstrates the power of a four-year public university, a two-year public community college and a private four-year university all coming together to partner and to demonstrate our relevance to Ohio and beyond,” said BGSU President Rodney K. Rogers. “This partnership is one example of how we are meeting workforce demands by connecting education and listening and responding to industry needs.”

“We are fortunate to live, learn, and work in a vibrant and collaborative community,” added Dr. Katherine Fell, president of the University of Findlay. “Having a dynamic and flexible mechanism for intentional workforce development is vital to the continued growth of our region.” 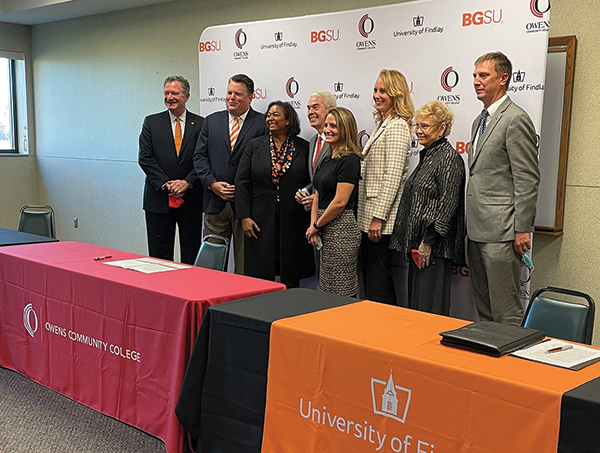 Photo courtesy of University of Findlay

Preparing for an Electrified, Digitized Future

Tim Mayle says the Center was funded with $2 million in seed money by the state legislature, and is rolling out its first couple of projects now. He says it’s rare to see this type of partnership across the three types of institutions. “There are two reasons we see it developing,” he says. “First, a lot of these companies are investing in automation. Not only that. They have to design it, engineer it, train on it … all these different pieces. A lot of times you think about workforce and education and have a school to train them after they’ve already done everything. We want to be involved early on and help design those systems.”

The second reason, he says, connects to his main line of work. “There are all these leads, a record amount, with a lot of them in two areas — electrification and autonomous vehicles. A lot of these technologies need to come to the U.S. because of policy saying a certain percentage needs to be built here.” Mayle and his colleagues in the region can leverage their longtime relationship with Ohio-based OEMs such as Honda and with a wide range of suppliers and use the new Center to help attract more.

“You have the support you need for your new technology,” he explains. “And you have these existing Tier 1 and Tier 2 suppliers that will have to remake themselves. A company doing tubing for a traditional engine may not exist in 10 years if EVs develop at the pace they’re expected to.”

Mihalik was among the leaders present for the Center for Advanced Manufacturing and Logistics’ launch in November, alongside all three university presidents and Ohio Chancellor of the Ohio Department of Higher Education Randy Gardner, who earned his bachelor’s and master’s degrees at BGSU.

“We have the top-down support that shows we have the direction,” Mayle says. “Not a lot of places have a turnkey resource like that. It’s a unique piece.”

Mayle observes that the automation and digitization movement isn’t restricted to automotive suppliers. Companies in the Findlay area making paper products and cookies are also pushing the digitization envelope.

In remarks at an industry conference, Gaur said, “We think a gradual adoption of advanced digital technologies is the best way forward, bringing necessary automation where needed, while ‘upskilling’ the workforce to manage and leverage these complex systems,” he said, sounding like a mission statement for the new Center.

Mayle says Hitachi and other suppliers such as Italy’s Marelli are now moving beyond Tier 1 status. “They’re calling them Tier 0.5,” he says, because they’re embedding themselves even further within the operations and facilities of the OEMs.

Hitachi’s Gaur also said digital platforms allow companies to more quickly deal with disruptions due to VUCA – volatility, uncertainty, complexity and ambiguity. That sounds a lot like the daily work of economic developers in Findlay and other top micropolitans, whether they’re dealing with infrastructure projects or new housing development, as area developers are doing to the tune of around 1,000 new units in Findlay, says Mayle.
Call it Tier 0.5 economic development.

This year’s No. 2 micro — up from No. 11 last year — is Tupelo, Mississippi, a region whose 19 projects include a $20 million project from automotive supplier Martinrea Automotive Structures, two investments from Raybern Foods, multiple expansions of a call center by Waste Management and a $22.5 million, 400-job commitment in Baldwyn from Dr. Schneider Automotive Systems at the Harry A. Martin North Lee Industrial Complex in Lee County. All of the above are acquainted with the work of the area’s lead economic development organization the Community Development Foundation (CDF).

Germany-based Dr. Schneider, a specialist in automotive interior trim, add-on parts, storage systems, consoles and mechatronic and electronic components, counts among its customers such OEMs as Volkswagen, Ford, Daimler, BMW, Volvo and Toyota, which operates a major plant not far away in Blue Springs.

“We would like to express our gratitude to CDF and the state of Mississippi for the facilities and great support throughout this process,” said Dr. Schneider COO Antonio Ramos at the announcement. “They highlighted the many benefits of this region. The skilled workforce, community support and local automotive industry experience will benefit our company, and we look forward to becoming part of this community.”

In December, Sandman Bedding, a locally based manufacturer of bedding and mattresses under the Nest and Wild brands, announced it is locating operations in Belden. The project is a $2.3 million corporate investment and will create 25 jobs. “The infrastructure, skilled workforce and robust supply of materials in North Mississippi will allow us to develop and scale high-quality mattress products,” said Brandon Jamison, CEO of Sandman Bedding. “We are a small company headquartered in Tupelo, Mississippi,” the company website proclaims. “Our town is a place where things get made.”

In September 2021, a new online vehicle marketplace, Carmigo, announced it was locating a 50-job headquarters in Tupelo. The company will be hiring software developers and operations employees to continually improve the current user interface across a network of operations that includes locations in Nashville and Birmingham. But Tupelo is where it decided to plant its home base.

“Tupelo is my family’s home. It’s where we live, where our kids go to school, where we go to church,” said Carmigo Co-founder and CEO Andrew Warmath. “And I’ve seen firsthand how so many young people grow up and leave our great state. I’m excited to have an opportunity to partner with Mississippi and battle our brain drain problem by providing an exciting place to work, while Tupelo provides them a great place to live. We have big dreams at Carmigo, and it’s going to take a lot of great minds to execute.”

Projects in No. 3 Top Micro Wooster, Ohio, include a nearly $18 million, 25-job expansion by The Wooster Brush Company, the oldest independent manufacturer of paint applicators in the nation, established in 1851. The privately held company says it employs 650 in producing more than 2,000 products for professional and DIY painters.

The STAHL/Scott Fetzer Co. is a mere 75 years old, and it’s growing too. The maker of commercial truck equipment broke ground last April on a new building in order to keep up with demand from the tree industry in particular.

“This has been our home for a long time and we want to continue to grow here,” Mike Stuckey, the company’s general manager, told The Daily Record. “It’s a great way to celebrate 75 years and we hope for 75 more.”

Built Rite Box and Crate is young compared to some of its Wooster brethren, having been established in 1986 to, you guessed it, make wood packaging solutions. The company is investing some $4.7 million in an expansion that will create 12 new jobs and 40,000 new sq. ft. of space. 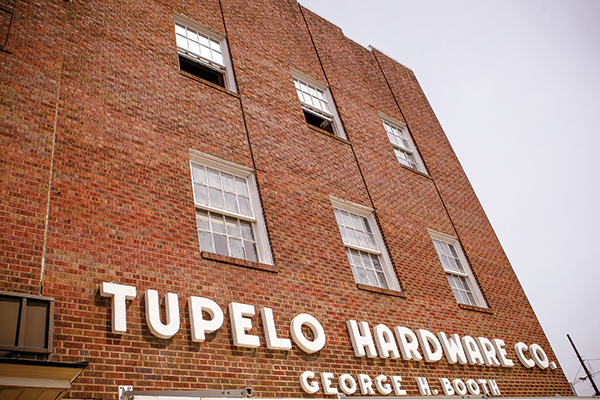 Legend has it that Elvis Presley’s mother Gladys bought him his first guitar at this hardware store in downtown Tupelo.
Photo courtesy of Tupelo Convention & Visitors Bureau