Let’s Go For a Ride

Rivian takes the road to Georgia. 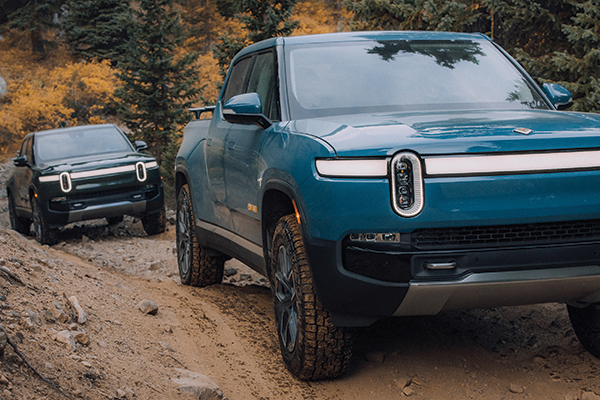 Rivian’s R1T was voted MotorTrend truck of the year for 2022.
by Gary Daughters 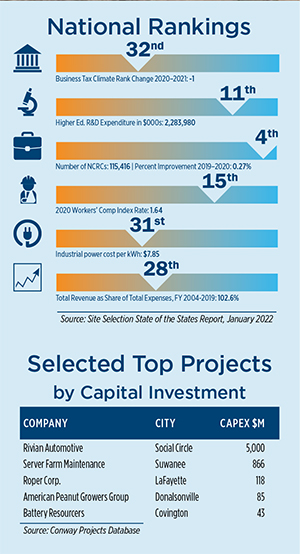 Could one town have a more welcoming name than Social Circle? So charming it’s almost a cliché, Social Circle — population 4,450 — calls itself “America’s Greatest Little Town.”

Maybe an hour east of Atlanta off Interstate 20, Social Circle, with its tidy town square, is surrounded by horse farms, rolling pastureland, ponds and clear streams. The amenably sleepy communities of Rutledge, Porterdale and Manchester aren’t too far away. Covington, population 14,000, is the nearest real thing and it’s 15 minutes closer to Atlanta.

Social Circle and the four surrounding counties of Jasper, Morgan, Newton and Walton are — somewhat like an omelet —being folded into the nascent Atlanta-Athens metroplex that’s on the way to even further leveraging the heft of the acknowledged capital of the South with the muscle of Greenville, South Carolina, and the financial wherewithal of Charlotte, North Carolina, to form what could become an SEC of mega-regions. Into that future has plunged Rivian, phenom of the EV truck world, which sports an impressive roster of deep-pocketed investors, including Amazon and Atlanta’s Cox Enterprises. Rivian’s R1T was voted MotorTrend truck of the year for 2022

“A North Georgia location is perfect for the light duty, electric vehicle.”

The upstart automaker’s year-long national site search for a second manufacturing plant ended on December 16, when the company announced plans to invest $5 billion in an EV truck plant at the 2,000-acre Stanton Springs North Megasite in Walton and Morgan Counties. The four-county Joint Development Authority, which had quickly assembled the site, had previously come together to develop the nearby Stanton Springs, a 1,600-acre high tech park whose tenants include Takeda, Facebook and the Georgia BioScience Training Center. 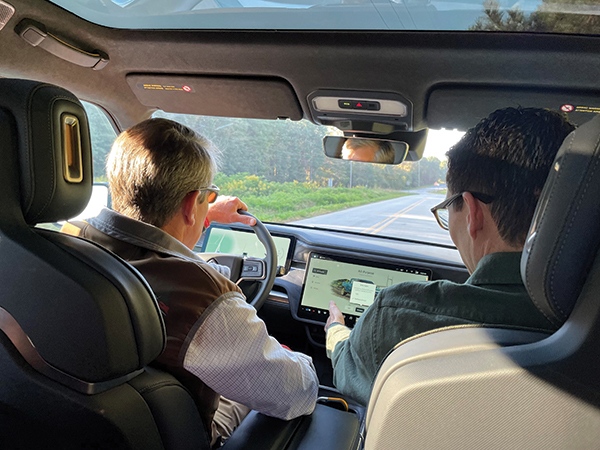 “It was a make-or-break moment.”

Across operations, which could include battery production, Rivian is expected to create some 7,500 jobs. The plant represents the largest single investment in Georgia history. It is expected to have an annual economic impact exceeding $6 billion.

“We are so proud that Georgia will now be home to Rivian’s largest manufacturing facility,” said Gov. Brian Kemp. “This single investment represents the future of automotive manufacturing and establishes the leading role the Peach State will play in this booming industry for generations to come.”

Georgia being Hollywood East, the closing unfolded like a movie. Rivian had other offers for its prized manufacturing plant, including a bid from Fort Worth, Texas, whose city council had approved a $440 million incentives package. Through a site selection process characterized by one outside observer as somewhat circuitous with evolving parameters, Georgia had dropped in and out of contention. Apparently unsure as to where his state stood, Gov. Kemp helicoptered east from Atlanta on Oct. 20, touching down near Social Circle for a hastily arranged meeting with Rivian founder and CEO RJ Scaringe, who had arrived in a Rivian pickup.

Georgia Department of Economic Development (GDEcD) Commissioner Pat Wilson had a front row — or to be precise, a back seat — ticket to the drama, snapping photos as Kemp took the wheel of the Rivian truck and RJ Scaringe rode shotgun.

“When RJ Scaringe visited,” Wilson related to Site Selection’s Ron Starner in December, “it was a make-or-break moment. The governor had been very much involved in the entire process. They went for a ride in the truck, and man, that is a fast vehicle! When they came back, both CEOs knew this was the right place to be.” Rivian, says Wilson, “fell in love” with the site. Whew!

Indeed, there’s a certain amount of emotion to all this, intensified by an appearance of incongruity between California-based Rivian, a symbol of sustainability, and “red-trending-purple-but-maybe-not” Georgia, where Gov. Kemp was elected in 2020 after campaigning around a gun-toting TV ad. Tim Echols, vice chairman of the Georgia Public Service Commission and a long-time proponent of the EV industry, views the state’s partnership with Rivian in matrimonial terms.

“Without the Kia success story, I am not sure Rivian comes to Georgia.”

“A successful marriage is built on finding the right partner and keeping your promises,” Echols tells Site Selection. “Rivian makes trucks and vans that red-state residents typically love, and the state has a track record of keeping promises they make in courtship to companies. Those two things bode well for a lasting marriage between Georgia and Rivian.”

Indeed, Echols found himself having a moment at the crowded announcement outside the Georgia State Capitol, where his dogged support for the industry, rare among his fellow Republicans, received a shoutout from the governor. He remembered back to 2015, when Georgia Republicans actually went gunning for the EV industry, removing standing tax credits for EV purchases, imposing a special $200 tag fee and booting EVs from High Occupancy Vehicle lanes in several suburban Atlanta counties. Fast forward to the present, which sees Republican legislators falling in line to support Rivian with incentives expected to far exceed the $400 million that lured Kia, Georgia’s first OEM, in 2006.

“It is really exciting seeing my Republican colleagues sincerely embrace an EV manufacturer in our state,” Echols says. “I was sitting there going, ‘This is going to really be good for both electric vehicles and for the state, because the Democratic Party has basically owned EVs for 10 years.’ And now, with Republicans embracing it, it really is kind of a bipartisan issue. And I think that’s going to bode well for legislation that benefits EVs and EV chargers and maybe even a return of the tax credit in the future.

“If it was just a little tiny commuter car or something like that, I don’t think you’d see this enthusiasm,” Echols tells Site Selection. “But trucks and delivery vans really fit in with economic development, which is so important to our Republican Party.”

So strong is the cultural factor that Echols is even willing to entertain a question about noise, something an EV truck doesn’t produce much of.

“There’s the importance of the sound, the smell of the fuel, the gears shifting and all of that,” he acknowledges. “For a lot of the old-timers out there, it’s really important. But these younger kids in their 20s and 30s, as they get successful and as they can afford an expensive Rivian truck or an F150 Lightning, eventually everybody tries it, right?”

For both Rivian and Georgia, the Kia example is instructive. Abetted by support from the state, the South Korean automaker has had a major impact on the region surrounding West Point, its Georgia home.

“Without the Kia success story, I am not sure Rivian comes to Georgia,” says Echols. “The state made good on promises to stand up the 70,000-square-foot on-site workforce development program, it built exit ramps and fulfilled other partnership promises made to Kia. Rivian,” Echols believes, “sees a believable track record that they know can be duplicated for them.” 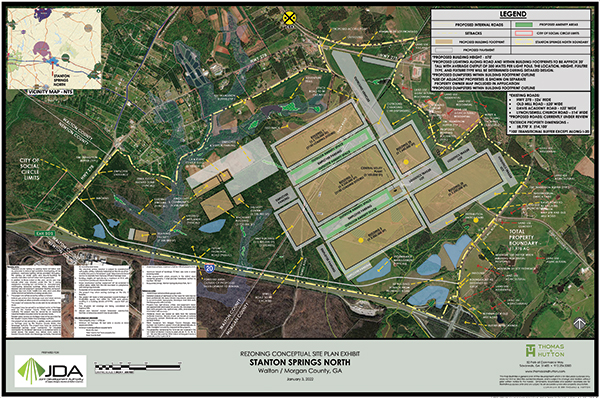 Rendering of the 2,000-acre Rivian property

Despite early concerns that the $400 million incentives package was excessive, Kia has exceeded its initial promises, with overall economic impact having ballooned from $1.2 billion annually to nearly $4.5 billion, according to John Kraft, spokesman for Georgia Power, Kia’s utility.

Officials in Georgia are banking that, with Rivian leading the way, the stretch of I-20 between Atlanta and Augusta — where golf cart maker Club Car has a long history of electric innovation — could emerge as an EV corridor. Greg Burkart, managing director and site selection and incentives advisory leader for Kroll, the multinational financial consultancy, says such hopes are not unrealistic.

“A North Georgia location is perfect for the light-duty electric vehicle,” Burkart tells Site Selection, also identifying the I-40 corridor that bisects Tennessee and North Carolina as emerging as a potential EV hub. The trick, of course, is setting up a network of suppliers that can come together on technologies that are still evolving. Burkart believes that can be done in Georgia.

“When you look at the EV platforms and compare them to the internal combustion platforms, the biggest differential that stands out,” says Burkart, “is the simplification of the powertrain. You basically have a battery and either two or four electric motors. You don’t have transmissions and other stuff like that, so in that respect it’s simpler. But it requires different suppliers.”

In terms of establishing that supply chain, Burkhart believes the battery is key.

“The battery is a simpler energy source than a V4 or V6 because it has fewer components. But the complexity of the technology is exponentially higher in a battery pack versus some of the old power trains that we have. For one thing, it’s just a lot newer.”

Citing OEM alliances struck by South Korean battery makers SK Innovation and LG Chem, Burkhart envisions similar partnerships on the horizon, prompted by potentially mutual benefits that could accrue to both OEMs and suppliers, who might opt to establish teams rather than going it alone. SK Innovation, which is teaming with Volkswagen and Ford, happens to be underway with a massive manufacturing plant along I-85 northeast of Atlanta, just 45 minutes from the Rivian site.

“OEMs,” says Burkart, “want to partner up with battery companies because there’s so much proprietary technology involved. To try to simplify that, OEMs are willing to work hand in glove with these battery suppliers to develop battery technology that’s unique to each one of the platforms. I would expect Rivian to do that, as well.”

On the day before Site Selection’s March deadline, GDEcD Commissioner Wilson made the surprise announcement that the state of Georgia would lay claim to the land for the Rivian project from the Joint Development Authority and would take the lead in shepherding the approvals process forward. The move comes amid what appears to be unexpectedly vocal public resistance to the project in nearby communities including Social Circle and Rutledge. Among the state maneuver’s most immediate impacts, it short-circuited a pending local zoning vote.

“We fully understand that some in your communities are concerned about the unknowns of what this project will bring,” Wilson said in a statement. “Our commitment is to partner with county and city governments, local chambers of commerce and nearby businesses to ensure your communities have a voice in this process. We are establishing a consolidated approach for environmental compliance, public input and community benefit.”

In an email statement to Site Selection, an economic development official who wished not to be quoted by name asserted that “environmental standards are an absolute priority, and that’s why the State has sought out an environmentally conscious company like Rivian.”

Citing the precedent of similar actions in support of major economic development projects, state officials otherwise portrayed the takeover of the Rivian site as something along the lines of business as usual. However, a separate high-ranking state official who asked not to be identified termed the maneuver “damage control,” and an effort to signal to Rivian that “the deal will be protected.”

Rivian, asked to comment on the development, could not be reached by Site Selection’s deadline. 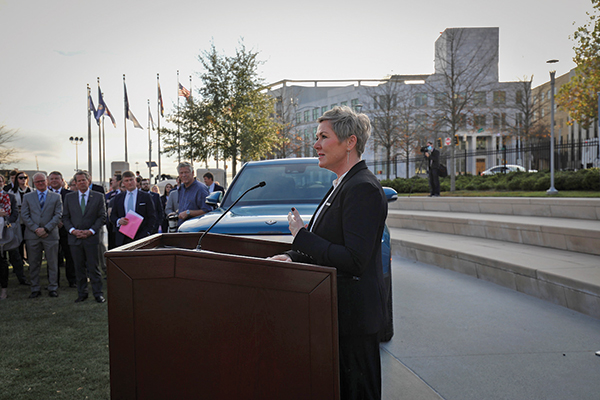