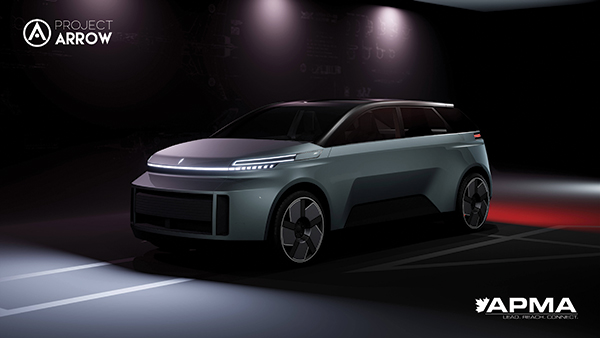 Ontario-based global parts manufacturer Magna International has enough in-house capabilities around the world to manufacture a complete vehicle. In fact, the company has done exactly that for some 30 different nameplates.

But does Canada have all it needs to assemble a completely Canadian car? What if a not-so-ragtag bunch of Canadian organizations got together to build a vehicle that not only demonstrated the country’s automotive superiority, but sought to meet the challenge laid down by Prime Minister Justin Trudeau of achieving a net-zero emissions economy by 2050?

That was the idea behind “Project Arrow,” devised by Flavio Volpe, president of the Automotive Parts Manufacturers Association (APMA), Canada’s national association representing OEM producers of parts, equipment, tools, supplies, advanced technology, and services. The concept — based on a winning design from a team at Carleton University in Ottawa — was unveiled at CES2020 in Las Vegas. Confluent with Ontario’s increased focus on clean energy and clean tech, the project aimed to “bring together the best of the best of Canada’s electric-drive, alternative-fuel, connected and autonomous and light-weight technology companies.”

A year later, in January 2021, an AI-enabled formal RFP went out to the growing universe of interested parties.

“More than 130 firms have now expressed interest in being part of this generational effort,” Volpe announced in Vegas last year. “Today, together with Windsor-Essex Economic Development Corporation, we are launching an Artificial Intelligence-enabled database portal that will maximize the impact of our supplier search and our technology integration effort. AI-enabled teardown technology developed by YQGTech will automatically connect proposed parts, systems and components with required complementary counterparts in an effort to create an architecture best suited to series production.”

That was how it started. How’s it going?

As of February, the Project Arrow website displayed a list of 25 organizations under the heading “Our Supply Chain.” Among them are heavyweights such as Martinrea, Toyota Motor Manufacturing Canada, Michelin, Woodbridge, Dana and ArcelorMittal; less familiar firms such as Callum, Audesse, Neuronic Works, LeddarTech and GeoTab; and academic partners Ontario Tech University (via its ACE program) and University of Waterloo.

“At the intersection of advanced mobility and climate change lies the challenge of our times. Future generations will ask if we ran faster or stretched out our arms farther. The Arrow will be remembered as the gauntlet we dropped in response to this call to action.”

Volpe was otherwise occupied in February as he led the APMA’s lawsuit seeking an injunction to restrain participants in the border bridge blockade that he said led to $1 billion in unrecoverable automotive production. So he referred me to APMA Senior Vice President of Innovation Warren Ali, who says Project Arrow germinated from the work that began in 2015 that culminated in AVIN — the Autonomous Vehicle Innovation Network. In 2019, members were seeing the inevitable trend toward EVs and pondered showcasing Canada’s EV ecosystem in the same way they’d showcased its autonomous capabilities.

“It’s hard to do that with a production vehicle, so we said, ‘Why don’t we take some lessons from AVIN and expand to electrification, but take it one step further — let’s do one from scratch.” The final brainstorming of the project name — paying tribute to the last time Canada was recognized for producing a first-of-its-kind vehicle, the Avro Arrow interceptor aircraft in the 1950s — took place in December 2019, Ali says, “when the world was normal.”

The team hoped to garner maybe 200 interested parties to select from and work with. They’d received more than 500 responses to the RFP when they decided to stop. There was duplication among them, as well as “some tire-kickers,” Ali says. “But we far surpassed our target. It’s impossible to work with that many on a singular vehicle, but it demonstrated the vast interest across all of Canada in various technology ecosystems as well as in the traditional manufacturing.”

Those include robust AI hubs in Montréal, Toronto and Edmonton, married with advanced ongoing work in prototype batteries, aerodynamics and lightweighting. While there might not be much facility expansion as a result of Project Arrow, there will be expansion of value-add and intelligence in the componentry going into these “cellphones on wheels,” Ali says.

Convening for Project Arrow itself has spawned discussion among companies across Canada on other projects, he says. “We’re now seeing connective tissue being formed between the traditional manufacturing hubs,” he says, from the 401 through Windsor along the Great Lakes and St. Lawrence into Quebec, “connecting into that manufacturing spine, if you will. We’re also seeing some really interesting manufacturing groups popping up as well. They’re all starting to find homes, but in common purpose with what Project Arrow is. That’s really being able to build these vehicles from the ground up and encompass the entire value chain from resource extraction through full battery and cathode and anode development and then into full battery development and integration into EVs themselves.”

A Car That Cares

There’s one more innovative thought hovering over all the tech talk. And it’s pure Canada.

“We’re looking at this as a Canadian vehicle, and Canadians are known around the world for being caring and friendly,” Ali says. So the team has developed the term VAC — vehicle as a caregiver — to represent ways that systems within the vehicle can literally care for the health and well-being of the occupants and operators.

“Which is important, you know? I mean, I don’t like driving in traffic,” Ali says. “I don’t know if there’s anybody in the world that likes being stuck in traffic at any point in time. There may be ways that we can create better operational things for people like me here in the GTA, whether it be the temperature within the vehicle, the tone of the lighting, the music that’s being played or something within the vehicle that can create better comfort and care for the operator, and then the occupants as these vehicles move to more fully autonomous capabilities or shared vehicles. It’s something we think could be a really unique selling point. This is one of those areas that allows a lot of creative juices to flow.”

Project Arrow harmonizes with the work the APMA has been doing for 70 years on more core issues such as workforce development. But it’s also sending members in completely new and fresh directions with no history, “basically blazing the trail,” Ali says. “It’s not easy, but it’s definitely something we’re all accustomed to now and we all get energized by.”