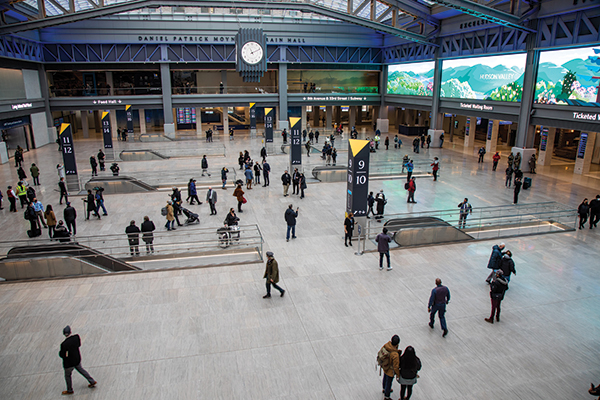 plan hatched by the Northeast Corridor Commission last July to refresh rail networks from the nation’s capital to Boston has received a shot in the arm. The $1 trillion Infrastructure Investment and Jobs Act (IIJA) approved by Congress and signed into law by President Joe Biden in November 2021 may not inoculate traditional jobs centers from the work-from-anywhere, hybrid workforce era. But it could put more communities and populations on the threshold of shared prosperity.

Funding provided by the new law will support CONNECT NEC 2035 (C35), a 15-year plan that involves a detailed and efficient sequencing of investments covering 150 infrastructure projects in a rail corridor that serves nearly 800,000 daily riders. The NEC Commission includes one member from each of the NEC states (Massachusetts, Rhode Island, Connecticut, New York, New Jersey, Pennsylvania, Delaware and Maryland) and the District of Columbia; four members from Amtrak; and five members from the U.S. Department of Transportation. It also includes non-voting representatives from freight railroads, states with connecting corridors, and commuter operators.

“The Bipartisan Infrastructure Deal is a transformational investment in America’s future that will repair and replace aging infrastructure and advance the next generation of passenger rail,” said Amit Bose, deputy administrator, Federal Railroad Administration, and NEC Commission co-chair, when the U.S. House of Representatives approved the IIJA. “The Northeast Corridor is vital to the regional and national economy.”

You want to talk aging infrastructure? Look no further than Pennsylvania, where a bridge built in 1970 and recently rated as in poor condition collapsed in Pittsburgh on the eve of a visit from President Joe Biden. Analysis has shown about $1.6 billion from the IIJA will go toward Pennsylvania bridges alone.

“In the aftermath of the pandemic and its associated economic challenges, implementing as much as $117 billion in capital investments through the 15-year C35 plan will generate over $90 billion in earnings throughout the U.S. which will contribute to the growth of state and local economies,” says the NEC Commission. “As new stations and rail services in the C35 plan are put into service, better transportation options will support continued economic growth for urban centers along the NEC and for communities poorly served or entirely bypassed by today’s railroad.” 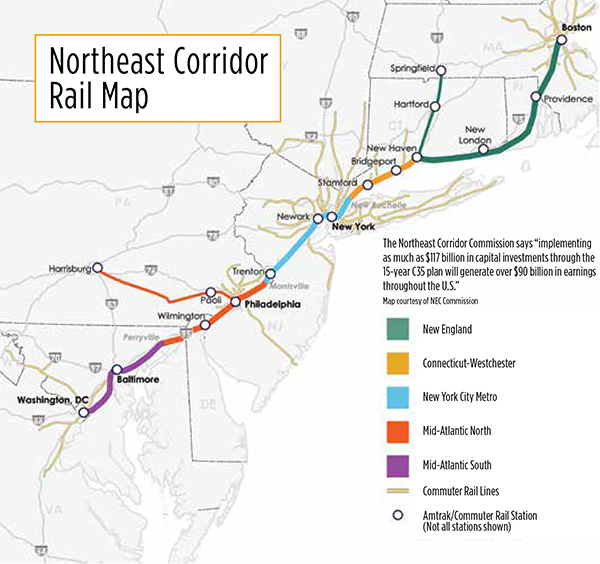 The commission says C35 investment will generate nearly 1 million total new jobs in the Northeast over the 15 years, including more than 6,000 specialized railroad construction jobs. “These new public and private sector construction-related direct, indirect, and induced jobs will in turn generate $60 billion in earnings,” says the plan. “An additional 700,000 jobs and $34 billion in earnings will be generated in the U.S. beyond the Northeast in industries providing materials and equipment for the C35 plan.”

The plan “will enhance access to locations within the Northeast that are growing and projected to grow in the future,” notes the report’s section listing overall benefits. “The Northeast is home to four of the nation’s 11 largest metropolitan areas. These cities have NEC stations in or near their historic city centers with vibrant, walkable business districts and residential neighborhoods.” U.S. Census figures show that both population and employment within a half-mile of NEC rail stations grew at faster rates then their metropolitan averages between 2011 and 2019.

New Haven’s Union Station, for example, is at the center of a new transit-oriented development (TOD) program encouraging several mixed-use developments within a half-mile.

The report also notes that the 150 projects will be making up for lost time in two ways: catching up with deferred maintenance and getting people to places on time. Travel time from Boston’s South Station to Union Station in Washington, D.C., is projected to improve by 54 minutes by 2035. “Corridor-wide, intercity and commuter rail passengers will save more than 6 million hours a year in travel time,” the document states. “The total value of these saved hours is nearly $140 million annually.”

Among the facts and findings in the 274-page plan are plenty of plans involving TOD and innovation districts in close proximity to rail stations. “As the transit backbone for an entire mega-region,” the report states, “the NEC is a catalyst for expanding and planned innovation districts in Newark, Delaware; Philadelphia, Pennsylvania; Providence, Rhode Island; and Boston, Massachusetts.”

The C35 plan notes a new regional transportation center now under construction adjacent to the University of Delaware STAR Campus, which is planned for 1 million sq. ft. of real estate and features lab, office, clinical, incubation and co-working spaces within less than an hour’s train ride to downtown Philadelphia and Baltimore.

Economic development in the other Newark in New Jersey is strongly tied to the NEC as well. NJ TRANSIT is looking to redevelop a 12-acre site near the Amtrak and NJ TRANSIT Metropark Station into a mixed-use development. Newark “ has also been leveraging NEC access to help revitalize the city’s downtown,” the report noted, citing office relocations downtown from the suburbs in recent years by Mars Corp. and Panasonic.

In New Brunswick, a 10-story, 210,000-sq.-ft. research and incubator site called The Hub is right next door to the New Brunswick Train Station, and will welcome early tenants including Rutgers and Princeton universities, RWJBarnabas Health and Hackensack Meridian Health.

“By harnessing the vast reservoirs of ingenuity among our regional research institutions together with community and industry partners, we will build a better future,” Princeton University Vice Dean of Innovation Rodney Priestley said when the complex’s first tenants were announced in November 2020.

Communities up and down the Northeast Corridor are all counting on the same.