The Rise of the Silicon Heartland

What Intel’s massive investment in Ohio means for the Midwest and beyond. 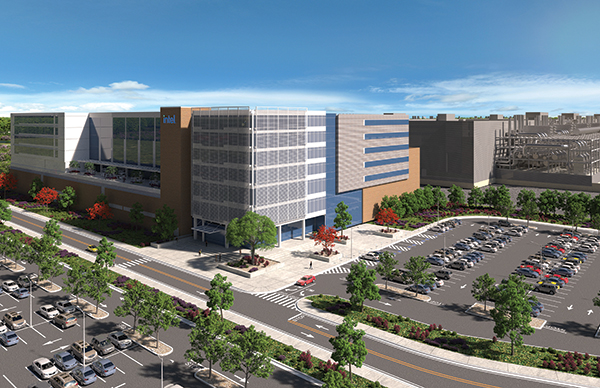 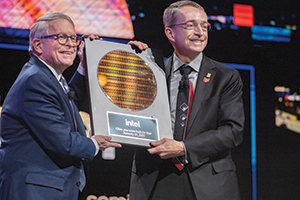 The ink on Intel’s $20 billion investment deal in Ohio was barely dry in January when experts started weighing in on the long-term impact of the deal.

Much of the analysis in the press centered on Ohio’s $2 billion incentives package for the $200 billion California-based company, but the ramifications of this project in New Albany on the outskirts of Columbus go much further than that.

What does Intel’s semiconductor manufacturing gambit — the first ever to land in the Midwest — mean for the industry?

Ohio U.S. Sen. Sherrod Brown, on the day the deal was announced, said, “We are finally burying the term ‘rust belt.’ ”

Not even the most cynical observer can argue that the term applies to what’s happening now in Central Ohio. Whatever rusted out 40 years ago has come bursting back to life in the form of a high-tech-driven, advanced manufacturing economy stemming from decades of investment in education, infrastructure, community development and urban planning.
Intel CEO Patrick Gelsinger, who grew up in the Amish and Mennonite region of rural Berks County, Pennsylvania, told reporters gathered at the announcement ceremony on Jan. 21 that the project could grow to $100 billion upon buildout.

Initially, Intel will build two chip plants on 926 acres in New Albany and hire 3,000 workers at an average annual wage of $135,000. Another 7,000 workers will be hired to construct the complex.

“Ultimately, we hope to establish the largest semiconductor manufacturing site on the planet,” Gelsinger wrote in a memo sent to Ohio Gov. Mike DeWine on Christmas Day 2021.

“The Intel project puts an exclamation point on the Columbus region as a tech center of excellence,” site consultant Jack Boyd of The Boyd Company Inc. says. “State and regional economic development marketers are already referring to Columbus as the Silicon Heartland."

“(Ohio) had to begin site assemblage in advance. That is a long-term investment that is worth making. If there is a lesson coming out of the Intel project, that is it.”
— Jay Biggins, Principal, Biggins Lacy Shapiro

Boyd says Ohio crafted an incentives package that made a difference. “The state budget passed last summer included a provision to double the length of state tax credits from 15 to 30 years for so-called megaprojects like Intel’s with more than a billion dollars in investments,” he says. “Today, incentives are the rule rather than the exception. Our clients have come to expect them as part of the site selection process.”

Site consultant Jay Biggins of Biggins Lacy Shapiro says, “In many ways, this project was less about the incentives than the state’s readiness and ability to assemble and deliver the site. It requires the state and local governments to cooperate in an affirmative strategy to assemble large sites and equip them with the needed infrastructure and deliver them on a reliable schedule that companies can trust. They had to begin that assemblage in advance. That is a long-term investment that is worth making. If there is a lesson coming out of the Intel project, that is it.”

What Can We Learn from Ohio?

Darin Buelow, principal at Deloitte Consulting, calls the project “nothing short of transformational. This will attract an industry behind it. Suppliers will be located close to the wafer fab. That is part of this transformational story.”

Landing Intel opens the floodgates for future high-tech investment in the region. “Any place that has won a big wafer fab investment — you can see what has happened over time,” says Buelow. “It was called Silicon Valley back in the day because that is where you made chips. There are not any wafer fab plants going there anymore.”

Ned Hill, professor of economic development at The Ohio State University, says that “older industrial cities have a legacy of built infrastructure, location and talent that entrepreneurs are beginning to discover. The growth of urban Columbus is causing investment in Appalachian Ohio. The commuter shed for this development will affect the housing market in a 40- to 60-mile radius in Central Appalachia.”

Wright-Patterson Air Force Base in Dayton made a difference too. “They are part of purchasing electronics and defense systems,” says Hill. “You don’t want South Korea making most of our semiconductor chips. Strategic sourcing started coming up. For the last 15 years, Ohio State has been building the capacity on materials manufacturing for sustainability. That program invented the bachelor’s program that will be one of the major training resources for Intel.”

Matt McQuade, managing director of business development for One Columbus, says a critical selling point to Intel was the amount of engineering talent being produced by the state every year. “They will pull from across Ohio from 2-year to 4-year schools,” he says.

“They will pull from the entire Big Ten plus Notre Dame and other schools in the Midwest.”
John Boyd also sees a heightened role being played by congressional offices in Washington, D.C., in where mega-deal trophy projects finally locate. “We’ve seen a growing level of influence coming out of congressional offices in Washington, D.C., especially in industries linked to federal programs like those dealing with the pandemic or now with the shortage of computer chips,” he says. “The Intel project received strong support from Ohio Senators Sherrod Brown and Rob Portman.”

Expect Washington to be a major player in economic development recruitment for a long time to come, he says.

How Ohio Won the Intel Deal

You don’t win a $20 billion project by playing in silos.

Ohio’s economic development leaders knew from day one that if they were going to be competitive for Intel’s massive chip plant investment, they would have to collaborate early and often. J.P. Nauseef, president and CEO of JobsOhio, tells Site Selection that Ohio was one of 40 states vying for the project.

“We know we had a lot of competition,” says Nauseef. “What was evident from the start was how quickly our team had to rally and move. We received the RFP in early May. We had a week to turn it around. We canvassed the whole state for sites. We provided details on our workforce. We showed them that we produce 177,000 graduates from Ohio universities each year, including over 20,000 STEM graduates. We had access to water. We had an available site.”

Matt McQuade notes that the site chosen by Intel was the only Ohio site considered for the project. “To get 1,000 or so acres with the infrastructure needed, it’s hard to find those sites anywhere,” he says.

Nauseef points out that “we did not provide the richest proposal. What we had was a strategic location. Ohio has diverse industry that is ideally suited for the supply chain of the semiconductor industry. JobsOhio also provided a competitive advantage due to our private structure and independent source of funds.”

5 Takeaways from the Intel Deal
1
The “Rust Belt” moniker is dead,
or at least it ought to be.

3
Taking the long-term approach to
economic and community development
paid off — for Columbus and Ohio.

4
Expect to see more high-tech production centers
locate in the interior of the country.

5
Congressional offices in Washington are leveraging
their power for economic development.

JobsOhio is funded by profits on sales of liquor in Ohio, not from taxes paid on that alcohol. In 2011, economic development in Ohio was privatized. “In 2013, we went to the bond market and raised $1.3 billion and secured a state liquor license through 2038,” Nauseef explains. “This funds economic development. It enables us to quickly adapt and do deals like the Intel deal.” The JobsOhio framework is one of the competitive differentiators for Ohio. “No other state has this,” says Nauseef.

When it came time to talk incentives, JobsOhio came to the table with a $150 million offer — part of a $2 billion package in state and local incentives required to seal the deal.
The team recruiting Intel included people from the Governor’s Office, JobsOhio, One Columbus, City of New Albany, Licking County, Jersey Township, Ohio Department of Development, Columbus State Community College and The Ohio State University, as well as folks from the private sector.

“The New Albany Company was a key player in this deal,” says Matt McQuade. “They are a development firm. We worked with them on Google Cloud and other projects here. They are battle-tested. Also, AEP was a tremendous partner on the utility side.”

It comes down to the team, Nauseef says. “They know the difference between a good deal and a bad deal. This deal required everyone to rally.”

New Albany Mayor Sloan Spalding and Economic Development Director Jennifer Chrysler began working on the project last May. For the project to be in the city, the deal required an annexation and rezoning process that is part of a larger annexation strategy and land-use planning.

“Do you have 1,000 acres that you can have up and ready? That’s what we needed to compete,” says Mayor Spalding. “We are home to Facebook, Google and Amazon Web Services, so we are accustomed to working with big clients that need a lot of land. Our team was prepared. Jennifer and her team should be in the Hall of Fame at some point for the work they did on the Intel project.”

Chrysler credits the entire team. “They work together to make things happen. We don’t have the political strife that you see in other cities,” she says.

Local incentives had to be part of the mix, and they were. “A 100% property tax abatement is our incentive,” says Chrysler. “That is a statutory program. The project qualifies for 30 years. For 20 years, there are proactive agreements with local school districts to revenue share with them. We can be flexible with our incentive packages.”

New Albany has experience in locating large clients. What was different this time was how many people it took to close the deal. “This is the first time we have been a part of such a robust team to win a mega-project like this. It is remarkable to see all the partners come together,” Chrysler says. “It was just as much about Ohio.”

McQuade says it took years of investments to get Central Ohio ready for Intel. “This project would not have happened here if we did not organize as a region back in 2010,” he says. “We have spent over a decade building capacity. It took visionary leadership from both the public and private sector in 2009 and 2010. We made continued investments to make this region better. Every day since then adds up to what we just accomplished.”