Atlanta’s Mother of All Water Projects

How the city got ahead of a potential emergency and ensured clean water for a century. 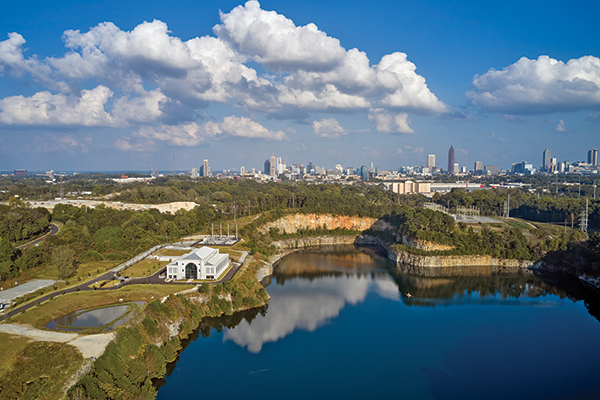 A 2.4-billion-gallon reservoir extends Atlanta’s emergency water supply to up to 90 days.
Photo courtesy of PC Construction
by GARY DAUGHTERS
I

“There’s a huge number of dollars and jobs that are at stake here in the U.S. economy with issues pertaining to unreliable water supply and wastewater treatment,” says Steven Landau, executive vice president of the EPB-US, the Zurich-based global sustainability consultancy. Landau was one of the lead authors of a recent report commissioned by the American Society of Civil Engineers (ASCE) in partnership with the Value of Water Campaign that assessed the U.S. water infrastructure investment gap and quantified costs of continued inaction.

“As infrastructure ages and the rate of infrastructure failures increases,” the report states, “household costs would more than double in 10 years to $4.3 billion, climbing to almost $14 billion by 2039.” The U.S., the report estimates, needs to invest a total of $109 billion per year (in 2019 dollars) in water infrastructure over the next 20 years. 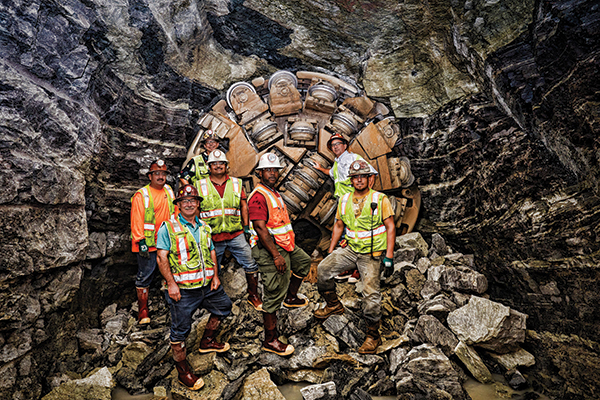 “Driller Mike” bored some five miles to within two inches of its target.

“It’s the reliability of water that’s the critical piece we are looking at,” Landau tells Site Selection. “However you look at it, there is a cost to not getting this right. The most drastic,” he says, “are relocations of households and even entire industries. Water is the basis of a great deal of our wealth, and we need to make sure that the reliability of these services is protected or enhanced.”

The ASCE report, titled “The Economic Benefits of Investing in Water Infrastructure,” flatly states that the payoff for such investments would be substantial.

There are signs the message is getting through. In its latest Infrastructure Report Card, issued in 2021, ASCE noted “modest but meaningful improvements” in U.S. water infrastructure, with the overall grade rising to C-. With a hint of optimism, the report highlights that the drinking water sector has embraced new technologies to address leaks, repairs and other sustainability issues.

Before the recent completion of a five-year, $321 million water supply project, the city of Atlanta’s water infrastructure included components dating back to the 1890s. The city’s emergency, raw water reserve had slipped to a mere three days, a dicey proposition for a municipality of some 488,000 people at the center of a metro whose population exceeds 6 million. City officials estimated a potential cost of upwards of $250 million per day in economic activity should the supply of water from the Chattahoochee River ever become compromised.

Not only has the potential for such a crisis thus been averted — the city now has a reserve capacity of up to 90 days — officials say the massive project has ensured a safe drinking water supply for the city for the next 100 years. Undertaken through a joint venture partnership of PC Construction of South Burlington, Vermont, and Atlanta’s H.J. Russell & Company, the Atlanta Water Supply Program was recognized in April by Engineering News-Record, the engineering industry publication, as the Top Water/Wastewater Project in the Country.

"However you look at this, there is a cost to not getting this right.” 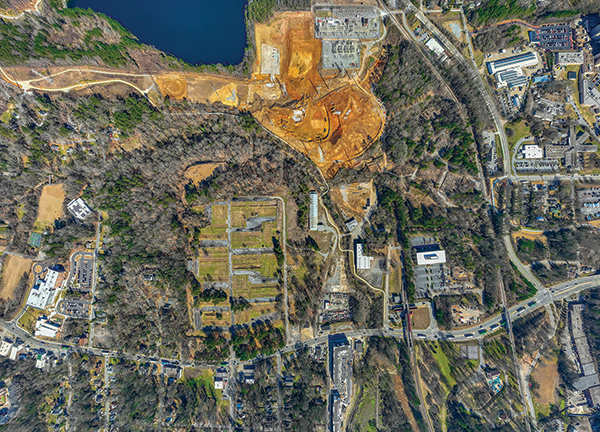 “This particular project was so unique in what we were trying to achieve and the time frame we were trying to achieve it through,” says PC Construction’s Robert Huie, who served as project manager. “Given all the different partners and stakeholders involved, it was important to collocate all the different teams on site. That allowed for very efficient interaction between all the different teams, with everyone having real-time information as to what was going on with the design, how it was impacting the schedule and how costs were being adhered to.”

The new system moves raw water from the Chattahoochee to the once-abandoned, 400-ft.-deep Bellwood Quarry, now flooded with the bright blue reserve supply of 2.4 billion gallons of raw water. It’s one of the largest such reservoirs in the world, and it connects to two nearby water treatment plants.

To link the quarry to the river some five miles away, teams bored a 10-foot diameter tunnel through hard Gneiss bedrock, using a 400-ft. drill manufactured in Ohio by the engineering company Robbins, and dubbed “Driller Mike,” after the Atlanta rapper and activist “Killer Mike.”

“At its best,” says Huie, “this machine was doing more than 200 feet a day. On tougher days when we were hitting very hard rock and difficult water conditions, it was making only about 30 feet.”

Using laser guidance, Driller Mike punched through on the Chattahoochee side in the fall of 2018, a mere two inches from a dead bullseye, “unheard of,” says Huie.

Part of Something Larger

Through inventive planning, the water supply project is but one component of something even bigger. The picturesque reservoir has become the centerpiece of Westside Quarry Park, a $44 million, 280-acre greenspace in a formerly neglected part of Atlanta that is steadily blossoming into a hub of attainable housing and commercial development. It’s now the biggest city park in Atlanta, larger even than bustling Piedmont Park in Midtown, an Atlanta signature.

Microsoft, which purchased the nearby Quarry Yards property in 2020, is planning a 90-acre campus as part of what it calls a multiyear project to create new office space and public amenities. It’s part of a broader effort to build on Atlanta’s growing profile as a center of data centers and technology jobs. The Seattle-based tech giant recently completed construction of its Atlantic Yards complex, which is expected to eventually bring 1,500 jobs to Atlanta’s West Side.

“We want to create a positive impact as an active partner in the Atlanta community,” Microsoft says in a statement. “From setting aside 25% of our expansion site for facilities that benefit the community to creating programs that aim to close opportunity gaps and partnering with the many historic universities in the area, we are excited to work hand in hand with local organizations and community groups in Atlanta to ensure Microsoft and the city thrive.”