As organizations do all they can to lure and retain talent, award-winning design projects shine a light on the evolving workplace. 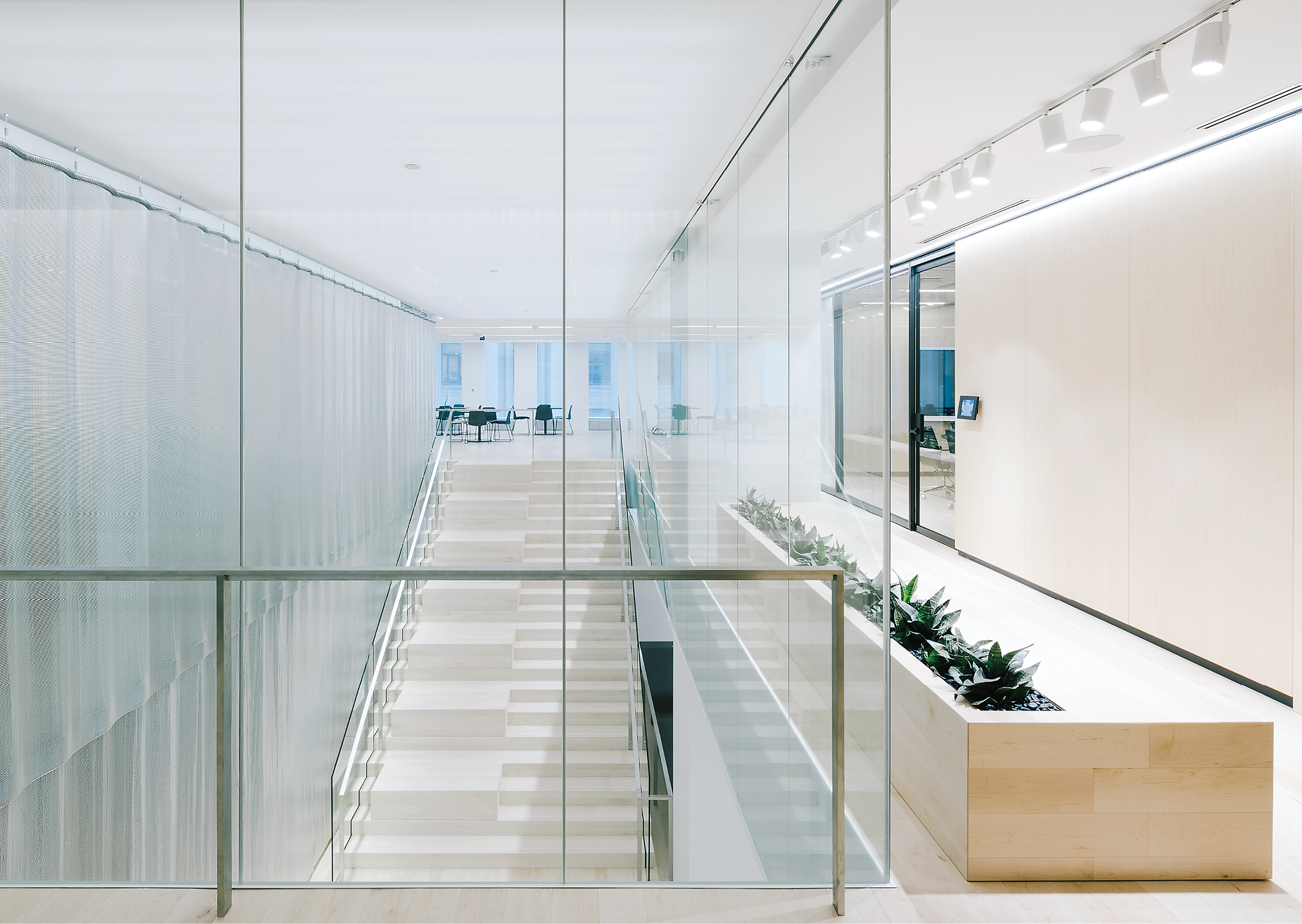 A new architectural staircase has become “the geographic, social, and symbolic heart” of the Business Development Bank of Canada’s headquarters in Montréal.
Photo by P. Karwoski courtesy of Atelier TAG and Jodoin Lamarre Pratte architects via v2com
by ADAM BRUNS
T

he Business Development Bank of Canada is known for providing research that’s a go-to resource for Canadian business leaders. A recent report on the tech sector noted, for example, that the country’s digital economy is expected to add 250,000 jobs between 2020 and 2025, but talent is growing scarce enough that “some tech entrepreneurs have already increased salaries by 20 to 25% in an attempt to retain current workers.”

A separate but related study based on a survey of 1,251 entrepreneurs and 3,000 Canadian professionals found more worrying trends about talent, especially in Quebec, where the talent shortage is most acute. Key findings from the September 2021 report:

“As the economy recovers, this scarcity of workers is reaching worrying heights, putting economic growth at risk and compromising the competitiveness of Canadian businesses,” said Pierre Cléroux, vice president of research and chief economist at BDC. 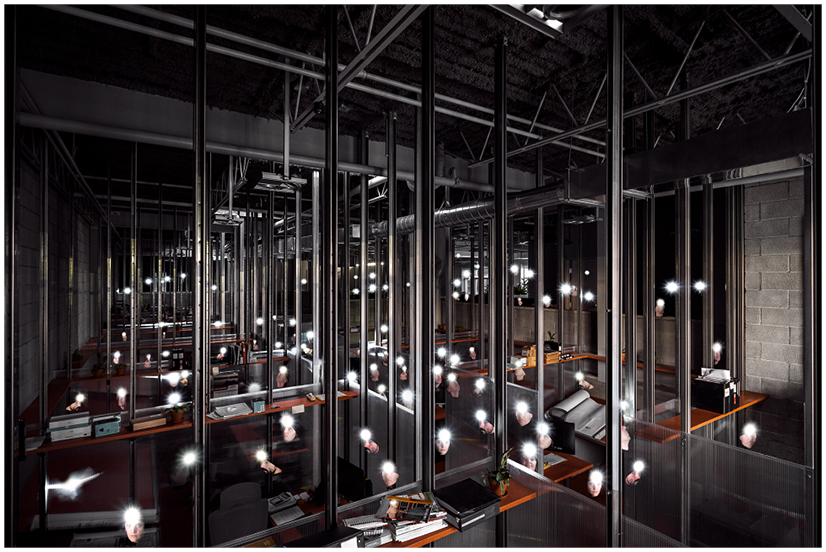 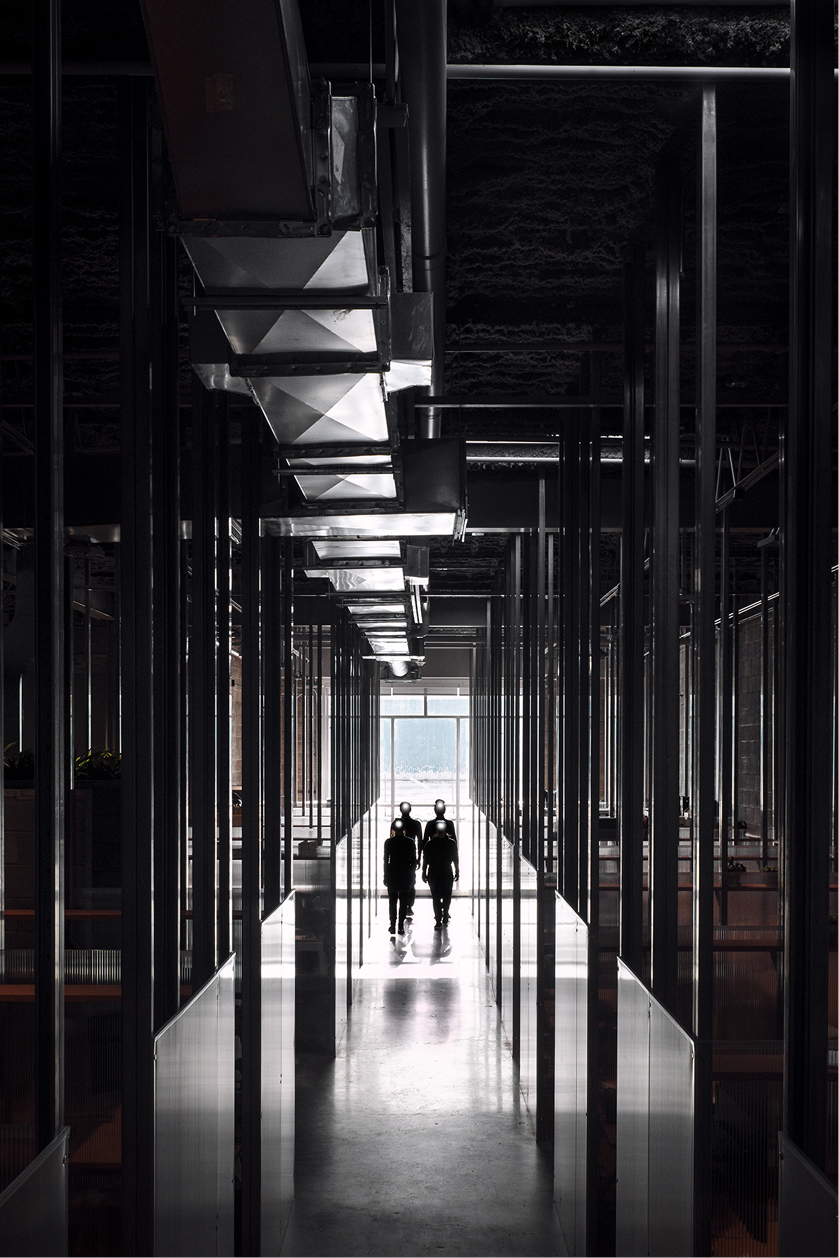 The redesigned offices of Les Entreprises d’électricité E.G. Ltée (EG) in Saint-Jérôme, northwest of Montréal, are minimal and theatrical all at once.

As the urge to return to the office battles it out with the urge to stay at home in your jammies, some companies are bringing renewed attention to their workplaces as talent retainers and attractors. BDC itself is among them.

Since 1994, BDC headquarters has resided in an iconic tower designed by I.M. Pei at Place Ville Marie in Montréal. But BDC’s 1,000 employees had become dispersed throughout that site and several adjacent buildings. Architects from Montréal-based firms Atelier TAG and Jodoin Lamarre Pratte took on the challenge of remodeling the head office to LEED Gold standards. A case study they released last August notes the C$31 million remodeling “underlines the great potential and richness of Montréal’s modern architectural heritage. From a sustainability perspective, the project aims to innovate in its response to changes in work patterns linked to new technologies, and with an eye to growing preoccupation for the well-being of workers.”

“A legacy of the modern period, office towers are typically composed of a series of horizontal spaces with little inter-floor connection,” the architects write. “The deployment of the BDC on seven levels is an opportunity to propose an alternative system that defines spacious, bright and vertically interconnected collaborative workspaces. By introducing double-height spaces and internal stair connections, employees are reunited through a vertical axis that becomes the daily mode of travel, connects different departments, and supports various social activities. Orchestrated as a socio-spatial device, the new architectural staircase becomes the geographic, social and symbolic heart of the BDC.”

That’s a lot of pressure for a set of stairs. But not to worry. It’s just an anchor for varying degrees of sociability from floor to floor, much like today’s university libraries where more public- and socially oriented activities are closer to the ground and concentrated, quiet work is closer to the sky.

“The architectural concept embodies the commercial competitiveness of BDC,” say the architects, “for which the well-being of its employees is the real engine of its productivity and growth.”

One presumes they were able to apply their turnkey services to their own headquarters, where a sense of theatricality worthy of Quebec’s Robert LePage or Cirque du Soleil was employed in rehabbing a derelict industrial building from the 1980s as a head office that EG’s co-owners, in the architects’ summary of the project, call “a complicit, mischievous adventure … an amazing result for and, above all, worthy of our team.”

Data and Power Combine to Advantage for Vantage 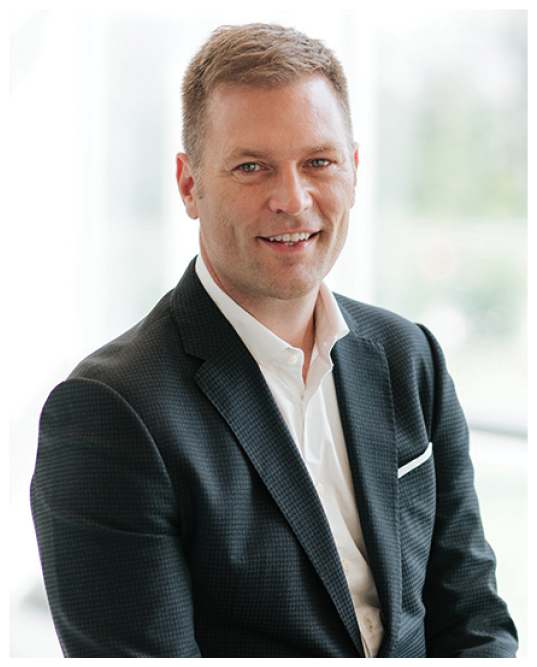 Vantage Data Centers, a hyperscale data center campus developer whose expansion into Quebec was first chronicled in these pages three years ago, in March announced it will invest an additional C$900 million to rapidly scale its Canadian operations to four campuses in the province. The investment includes the development of a third campus in Montreal and the expansion of two existing campuses in Montreal and in Quebec City, where the company has acquired eight additional acres of land.

A third facility at its QC4 Montreal campus will total 21MW and 94,000 sq. ft. and is scheduled to open in Q4 2022. “Once fully developed, the campus will offer customers 48MW of IT capacity and be powered by nearly 100% renewable energy from Hydro-Québec,” Vantage said.

“Customer demand for sustainable data centers in the province is fueling Vantage’s growth in the region,” the company explained. “The expansion of the QC2 campus is being partially funded by Société Générale, one of Europe’s leading financial services groups offering sustainability-linked financing options. A portion of the campus was approved for a ‘green loan,’ a first for Vantage, by meeting specific requirements, including the use of nearly 100% renewable energy, the low amount of anticipated carbon emissions, water conservation, an industry-leading design Power Usage Effectiveness (PUE) and an energy management plan to ensure high operational performance.”

Vantage is growing elsewhere too: After entering six markets in Europe in 2020, the company also recently entered five markets in Asia Pacific and broke ground on its first African campus in Johannesburg.

Vantage’s four campuses will total 143MW of IT capacity in the province with a combined investment approaching CAD$1.7 billion. “The Quebec Province is an ideal location for data centers due to our green and affordable power options, rich connectivity, cool climate and business-friendly culture,” said Maxime Guévin, vice president and general manager of Vantage’s Canadian business.

“By deploying 250 stainless steel strut channels, an imposing architectural device organizes distances and proximities, circulations and groupings,” say the architects. “These metal profiles, common in the electrical field, are used to fix the partitions, to support the furniture, and to camouflage all of the wiring … The industrial character, offered by the raw surfaces of the concrete, the shine of the stainless steel, and the translucent partitions unifying in an entity energized by accents of orange color, loads the space with an aesthetic cohesion emphasizing the re-interpretation of the open-plan office concept.

“The individual and collaborative workspaces, requiring a large area, are set up in a portion subtracted from the huge storage space of the building,” they continue. “In order to maximize the contribution of natural light, the huge garage door is replaced by a curtain wall. On the roof, the addition of six skylights, with dimensions that fit into the existing structural framework, helps provide increased natural lighting. These multiple light sources, filtered by translucent partitions, wrap the space in kinetic lighting that contributes to the theatricality of the experiment.”

Downtown Hub for School and Business

Provencher_Roy announced in December it was approaching the completion of a new downtown hub for HEC Montréal as the business school returns to the area where it got its start 115 years ago.

The architects in their case study note that the location at the intersection of the Quartier des Affaires, Quartier des Spectacles and Quartier International will not only engage the business community but provide space for a school that’s seen its student base grow by 64% in recent years. The facility will house spaces for professional development courses, collaborative research into emerging areas like AI, and conferences, says Provencher_Roy. 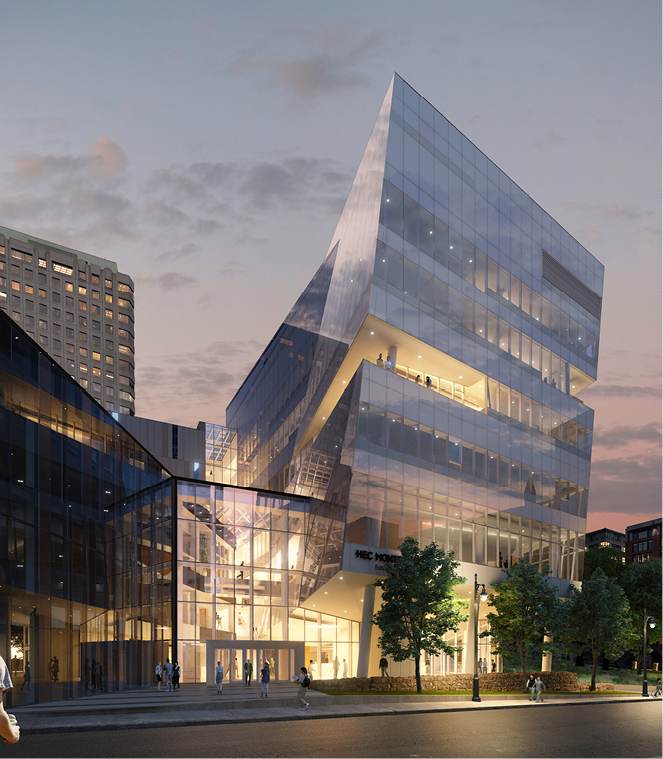 “The design arises from the unique geographic and urban qualities of Montréal, embracing the characteristics of this city built on a mountain to create a building eminently of its place,” they say of the 24,000-sq.-m. (258,342-sq.-ft.) structure. “Open and accessible from all sides, the building functions more like a neighborhood in itself than a stand-alone structure. It forms a linchpin in the historic urban fabric, interfacing with the surrounding business community to welcome students from around the world to the local business culture.”

“We started in the downtown core, and we are thrilled to return to our roots,” said Federico Pasin, director of HEC Montréal. “We wanted to be closer to our business community. Our clientele includes young students, fresh out of CEGEP [Collège d’enseignement général et professionnel or vocational/technical school], as well as professionals who work during the day and study for their certificate, DESS, or MBA at night. Establishing ourselves downtown allows us to better serve the latter.”

Like the EG project, the hub redevelops disused property, in this case an undeveloped lot in the shadow of St. Patrick Basilica that once was home to St. Bridget’s Refuge, a shelter for Irish women during the 1860s.

“The architects favored a co-construction process,” Pasin said in the Provencher_Roy case study. “They organized workshops with the neighborhood, businesspeople and students. Together, they imagined what the ideal campus would look like. We wanted a living space, something spectacular. And we are extremely proud of the result.”