From Batteries To Biosphere 2, Tech Abounds In AZ 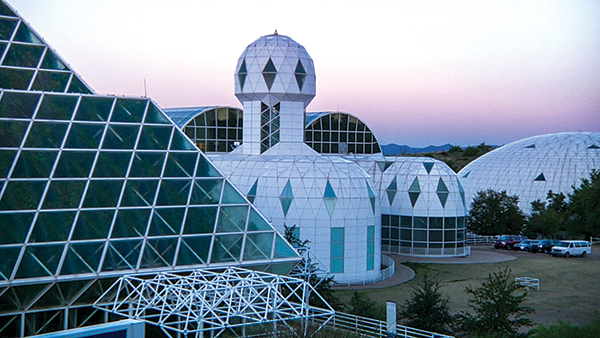 Fifteen years after the University of Arizona took over Biosphere 2, a new incubator has bloomed.
Photo courtesy of Tech Parks Arizona and the UA Center for Innovation
by Adam Bruns
A

rizona is a top 10 state this year and No. 2 in the nation over the next decade for projected tech job growth, says the Cyberstates 2022 report from the Computing Technology Industry Association (CompTIA). There is no shortage of both corporate and academic projects — even those announced in early 2022 alone — to back that up.

Among a flurry of investments across the U.S. in March, global battery manufacturer LG Energy Solution announced it would invest $1.4 billion in its first-ever cylindrical-type battery manufacturing facility in North America in Queen Creek, where it will employ what it says will be “a few thousand people.” Partners who worked to attract the project included the Arizona Commerce Authority, Pinal County, the Greater Phoenix Economic Council, Queen Creek, SRP, Mesa Gas, and Central Arizona College. “This high-tech facility further anchors Arizona as a hub for electric vehicles and sustainable technologies, bolstering our already robust EV supply chain,” said Sandra Watson, president and CEO of the Arizona Commerce Authority.

“This announcement proves once again that Arizona means technology, and we’re only just getting started,” said Arizona Governor Doug Ducey.

Indeed, the state is on a roll, with recent multi-billion-dollar investments from semiconductor leaders Intel and TSMC as well as electric vehicle makers such as Lucid, Nikola, and ElectraMeccanica. 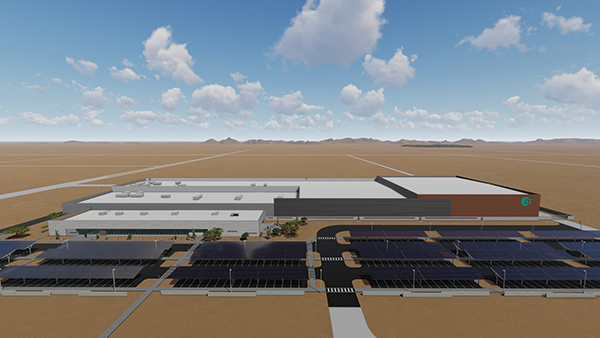 LG’s most well-known customer is General Motors, a company that also knows the value of Arizona’s tech workforce. The company just announced it is hiring several hundred employees for software-based positions at one of only four national GM tech hubs, the Arizona Information Technology Innovation Center located in Chandler’s Price Corridor in the Phoenix metro area. More than 1,000 already work at the facility that first opened in 2014. (The other three GM tech hubs are in Warren, Michigan; Austin, Texas; and Roswell, Georgia, in the Atlanta metro area.)

“As GM transforms from automaker to platform innovator, our IT Innovation Center in Chandler plays an integral role for the future,” said Umesh Murthy, director at the Arizona IT Innovation Center. “On top of the region’s deep existing pool of talent, Chandler offers a wonderful quality of life and strong community to newcomers.

Meanwhile, another major lithium-ion battery manufacturing plant is headed to the region, as Glendale-based developer Mangat Group in April announced the closing of a land deal with U.S. battery company KORE Power to build KOREPlex, a 2-million-sq.-ft. facility in Buckeye.

“The KOREPlex project will cement Buckeye’s position as a leader in cleantech as our highly trained employees deliver the battery cells that will form the backbone of the green economy across the United States and the globe,” said Lindsay Gorrill, founder and CEO of KORE Power.

The company anticipates employing as many as 3,000 people at full production, with up to 10,000 indirect jobs generated for the area. “A large employer like KORE Power allows residents to cut their commute, creating a more sustainable, affordable and convenient lifestyle, and further advancing sustainability efforts,” said Mangat Group founder Tony Mangat, a former trucker and truck stop developer. Buckeye aims to be a leader in green energy and to be known as Sustainable Valley.

The tech and electronics trend extends to Mesa, where FUJIFILM Electronic Materials, U.S.A., a supplier of chemicals and advanced materials for the semiconductor industry with four manufacturing and R&D sites across the U.S., in March completed an $88 million, 80,000-sq.-ft. expansion of its electronic materials facility in Mesa that will mean120 new positions in chemistry, engineering, manufacturing, warehousing, and maintenance by the end of 2024. Reflecting the ongoing national trend toward more employee amenities, the expansion not only includes more process tools, instrumentation and bulk chemical storage, but a new cafeteria and Fujifit, a free fitness center for the company’s employees with work-out equipment and classes. The company has operated in Mesa for 25 years, and currently employs 400 at the site.

“These past two years have shown us just how vital semiconductor chips are to our daily lives,” said Dr. Brian O’Donnelly, president and chief executive officer, FUJIFILM Electronic Materials, U.S.A., Inc., and global vice president, FUJIFILM Electronic Materials Division. “We are proud that we had the foresight to expand our operations here in Mesa to support our semiconductor manufacturing customers to enable the rapid advancement of our digital society.”

In April, JX Nippon Mining & Metals USA, Inc. announced its $29 million acquisition of a 65-acre greenfield site in Mesa as a new base of operations for its semiconductor sputtering target business serving the North American and European markets. The site will become the company’s center for advanced materials in North America. Phase one is targeted to start operations in early 2024 and will be capable of more than double the production of JX’s existing plant in nearby Chandler, which opened in 1991. The project will also lead to the creation of more than 100 jobs by 2025.

“Today’s announcement represents another opportunity for JX to reinvest in Arizona’s vibrant semiconductor ecosystem and support the increasing needs of our customers,” said Masago Kuwabara, president and CEO of JX Nippon Mining & Metals USA, Inc. “We’ve been a proud member of the East Valley and local semiconductor industry for over 30 years, and we look forward to our next 30 years and beyond.”

Return of the Son of Biosphere Part II

Intel estimates that its $20 billion investment in two new chip factories at the company’s Ocotillo campus will create more than 3,000 high-paying jobs and support an estimated 15,000 additional indirect jobs in the community.

Tech enhancements at the state’s major universities include a new Global Center for Technology Transfer at Arizona State University and a new $85 million, 89,000-sq.-ft. Applied Research Building at the University of Arizona in Tucson that will host research in space exploration, advanced manufacturing and imaging technology.

The imaging focus is in keeping with a recent optics investment in the Tucson metro.

In late March, Scotland-based PowerPhotonic, which designs and manufactures wafer-scale optics for advanced lasers and optical systems, announced that its U.S. subsidiary had signed a long-term lease for manufacturing facilities and U.S. headquarters in the Sahuarita Advanced Manufacturing and Technology Center (SAMTEC) in Sahuarita, part of the Tucson metro area. The project brings 20 high-tech jobs initially.

PowerPhotonic said the U.S. expansion would especially allow it to better support customers in the defense sector who require U.S.-based design and manufacturing of high-tech components and modules. “Our U.S. customer base is keen to see PowerPhotonic establish a strong U.S. presence and Southern Arizona is an excellent choice for an advanced optics company because of the strong optics community in the region,” said PowerPhotonic Founder and CEO Roy McBride.

The region in April welcomed a new chapter in the history of the Biosphere 2 complex: the opening of the University of Arizona Center for Innovation (UACI) incubator, which has a structured 27-point road map to support renewable energy and sustainable tech startups at the new outpost. Four startups are already working there. UACI is Arizona’s leading startup incubator network with 72 companies in the program and locations across Southern Arizona.

“The inventions and innovation spurred from the university’s research drive a robust startup scene, and co-locating research and startup support services together will only build on this success,” said University of Arizona President Robert C. Robbins. “This future-focused environment, dedicated to moving innovations forward, provides the ideal platform for technology advancements and business growth.”