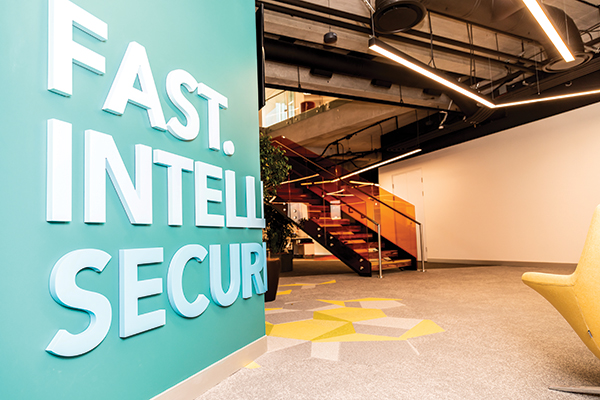 Akamai’s location in San José’s Roble Corporate Center is one of the company’s Global Centers of Excellence.
Photo courtesy of Akamai
by Adam Bruns
I

n the 13 years since Costa Rica opened up its telecommunications market, the country’s competition and infrastructure have continued to deepen and improve alongside its talent base. The World Economic Forum has rated the country No. 1 in digital skills in Latin America. Global companies working in such areas as artificial intelligence, cloud, cybersecurity, virtual reality and special effects/animation have noticed. Among them:

Akamai Costa Rica now employs over 473 people with a deep service portfolio, especially in cybersecurity. “Besides being a Center of Excellence, Akamai Costa Rica has led initiatives that have been implemented in other Akamai offices around the globe,” says Akamai Site Manager Scott Lerner.” These initiatives incorporate the local ‘tico’ spirit, culture and commitment to improving the communities in which we live and work.” They include a “Danny’s Lab” innovation center in Akamai facilities and in a mobile learning center created in remembrance of Akamai co-founder Danny Lewin; and a STEM education program that has worked with over 20 educational institutions for over six years.

Akamai Technical Academy (ATA) is a six-month program that trains individuals without a traditional STEM degree for technically oriented jobs at Akamai. “The program allows Akamai to bring diverse skillsets and backgrounds to its workforce,” says Lerner. “Similarly, Akamai Costa Rica has a solid professional practice program that provides outstanding high school students the opportunity to spend the last two months of their secondary education in a specialized Akamai training. Like the ATA, many graduates are offered full-time positions: their first professional experience and beginning of their technical career.” Once there, they can enjoy Akamai’s “FlexBase” global flexible working program, which allows employees to declare a primary work base at home or at the office.

Within eight years, the headcount at Accenture Costa Rica has grown by over 600%, turning it into a Global Digital Production Center of Excellence. “This remarkable growth is a clear consequence of the digital transformation acceleration, for sure,” Leonardo Framil, market unit lead of Accenture in Latin America, explains in a recently posted video. “But in the case of Costa Rica, no doubt that is completely related to the quality of the human capital that allowed us through a continuous innovation mindset to evolve our operation from traditional service to more transformational and tangible service delivering business outcomes for our clients in areas like data-driven marketing, campaign experience, digital finance, accounting and platform experience.”

In March 2022, India’s Infosys BPM announced it would be adding 400 professionals to the operation it launched in Costa Rica in 2013. Lifetime Value Co. (LTV) is adding 40 new software development positions to its operations in Escazú Corporate Center. And cloud data migration company Hakkoda opened Costa Rica offices in Ultrapark II in Heredia, investing $8 million and planning to hire 150 skilled employees this year.

“In recent years, software and cloud services have been among the fastest-growing sectors” said CINDE Managing Director Jorge Sequeira, “creating a considerable number of the 27,674 information technology jobs recorded in 2021.”

A Place to Land

Want to work from anywhere? Various publications and organizations have saluted Costa Rica for highest quality of life for expats and highest happiness in all of Latin America, as well as the top place to retire in all the world. Now there is also policy encouraging the flexible global workforce.

Concurrent with a resurgence of coworking spaces in the country, a new law was passed in 2021 establishing incentives to attract both expat individual investors and digital nomads — those talented, location-independent software, IT and design professionals who might alight in one place on the globe for six months or a year before dancing off to their next sweet spot.

Whereas remote workers used to have to renew visas every 90 days as “perpetual tourists,” now, as long as they have a steady monthly income of at least $3,000 ($4,000 for a family), they can qualify for a one-year digital nomad visa under the new “Law to Attract Workers and Remote Providers of International Services.” They can also renew the visa for an additional year provided they spent at least 180 days of the previous year in the country.

I looked in on this subculture via one of their go-to resources: Nomad List, a networking website that boasts a network of nearly 52,000 members. Around 1,000 of them are in and around San José.

Their “best countries” list shows a definite taste for independent-minded territories, headed by No. 1 Singapore, and including places such as Curaçao, Estonia and Hong Kong. Costa Rica finds itself at No. 66 on the list, with San José the No. 1 area in the country, followed by Puerto Viejo and Liberia.

With the new law and new regulations in place to complement cozy new coworking spaces opening up at a beach near you, CINDE aims to see that ranking rise fast. When those nomads arrive, they may find — just like the larger companies around them — that it makes sense to stick around for a while, free-roaming souls in a place known for its freedom.