Report: Tonnage Volumes Are Bouncing Back 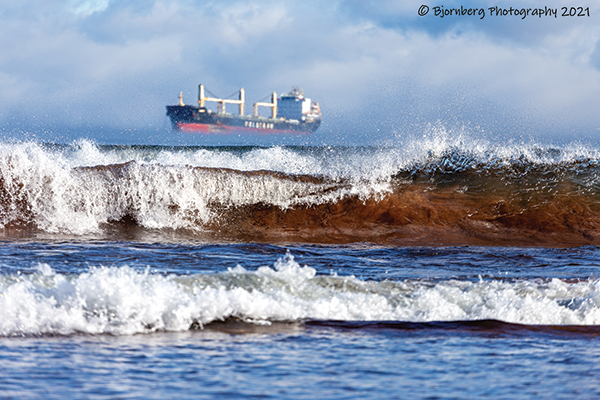 raffic on the St. Lawrence Seaway and Great Lakes is picking up from a pandemic-induced slowdown in 2020, according to recent analysis from the Great Lakes Seaway Partnership, a coalition of leading U.S. and Canadian maritime organizations. The 2021 Navigation Season, from March 22nd through December 31st, saw a 1.66% increase in traffic over the previous year, and total transits 1.61% to 3,918 vessels.

Some of the biggest commodities being shipped are those used in the construction and manufacturing industries, and they all saw significant increases in tonnage moved on the water system. Iron ore, for example, increased 14.38% to 6.95 million tons. Dry Bulk tonnage increased 6.89% to 11.26 million tons. General cargo was the biggest gainer with a nearly 73% increase in cargo to 3.9 million tons.

“We had one of our safest seasons ever, with only four ocean vessel incidents,” noted U.S. Great Lakes St. Lawrence Seaway Development Corporation Deputy Administrator Craig H. Middlebrook in a release. “U.S. Locks were available 99.9% of the time, and the overall system availability, taking into account any reason for not being able to navigate, including weather, was open 99.5% of the time. In a year that’s been marked by sudden, unexpected and prolonged disruptions, the resiliency of the Seaway and the dependability of its operations are worth noting.” 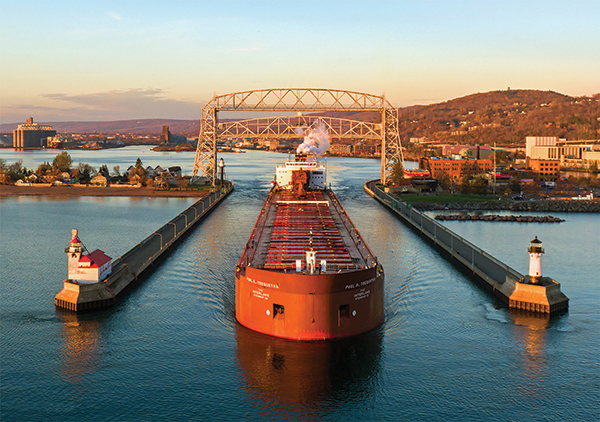 The Great Lakes Seaway Partnership made these additional observations about the 2021 navigation season: “The season opened with vessels moving various commodities for the food and beverage industry and the automotive sector to multiple U.S. and Canadian ports. This binational supply chain network for North American manufacturers was continuously re-stocked throughout the year. While the Great Lakes maintained its role as a dependable food supply chain, both U.S. and Canadian grain export tonnage was impacted by severe drought conditions in the Western states and Canadian prairie. Overall, agricultural export volumes decreased in 2021 with one of the bright spots of the season being a rebound in the Eastern Lakes’ soybean crop yields that were decimated by flooding in 2019. It is anticipated that the rebound for agriculture will continue into the 2022 navigation season.”

Ports that Weathered the Storm

Ports on the Great Lakes saw significant increases in tonnage shipped, according to the Great Lakes Seaway Partnership, and this year will be busier still. The Port of Cleveland, for example, saw a 69% increase in tonnage across its docks in 2021 compared to 2020, which it attributes to significant increases in non-containerized goods, containerized cargo, and iron ore shipments to the Cleveland-Cliffs Cleveland Works steel mill.

“The 2022 Navigation Season is already shaping up to be a strong year for the Port of Cleveland,” says Port of Cleveland Chief Commercial Officer David Gutheil. “We are expecting to build on the success we achieved in 2021 as we continue to position Cleveland — and the Great Lakes — as a key destination for cargo.”

The Port of Duluth-Superior is bouncing back too. Total maritime tonnage climbed to 32.9 million short tons in 2021, a 27% season-over-season increase and a 2.3% improvement over the five-season average. “We hoped for a return to normalcy in 2021 and a tonnage rebound from the pandemic-plagued 2020 season,” said Duluth Seaway Port Authority Executive Director Deb DeLuca. “We’re still waiting on the return to normalcy, but the tonnage bounce back was pronounced, driven especially by strong demand for domestic steel.”

Iron ore, the Port’s leading cargo by tonnage, led the upswing. The total taconite float topped 20 million short tons for the second time in four seasons, an unmatched feat since the early 1990s, according to the Port. In all, 20.4 million short tons of iron ore transited Duluth-Superior during the 2021 season, a 32.6% season-over-season spike and 11.9% gain on the five-season average. “Our port continues to be a key link in North America’s supply chain, and we look forward to playing an increasingly prominent role in 2022 as we hopefully build on the bulk cargo tonnage and expand our containerized cargo services,” said DeLuca. 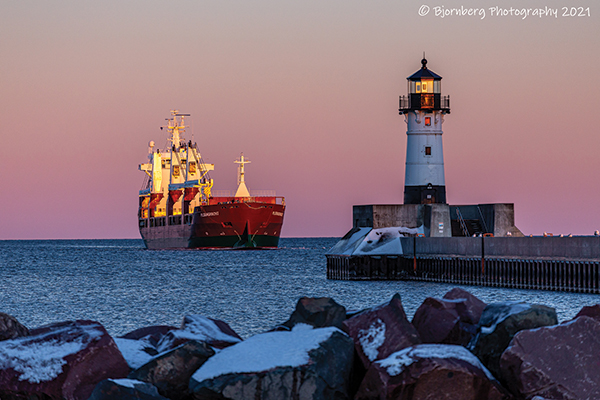 Third Place: An evening arrival of the Floragracht in Duluth amid
a pink horizon.
Photo by Adam Bjornberg