St. George Catches Up With the Times

Or is it the other way around? 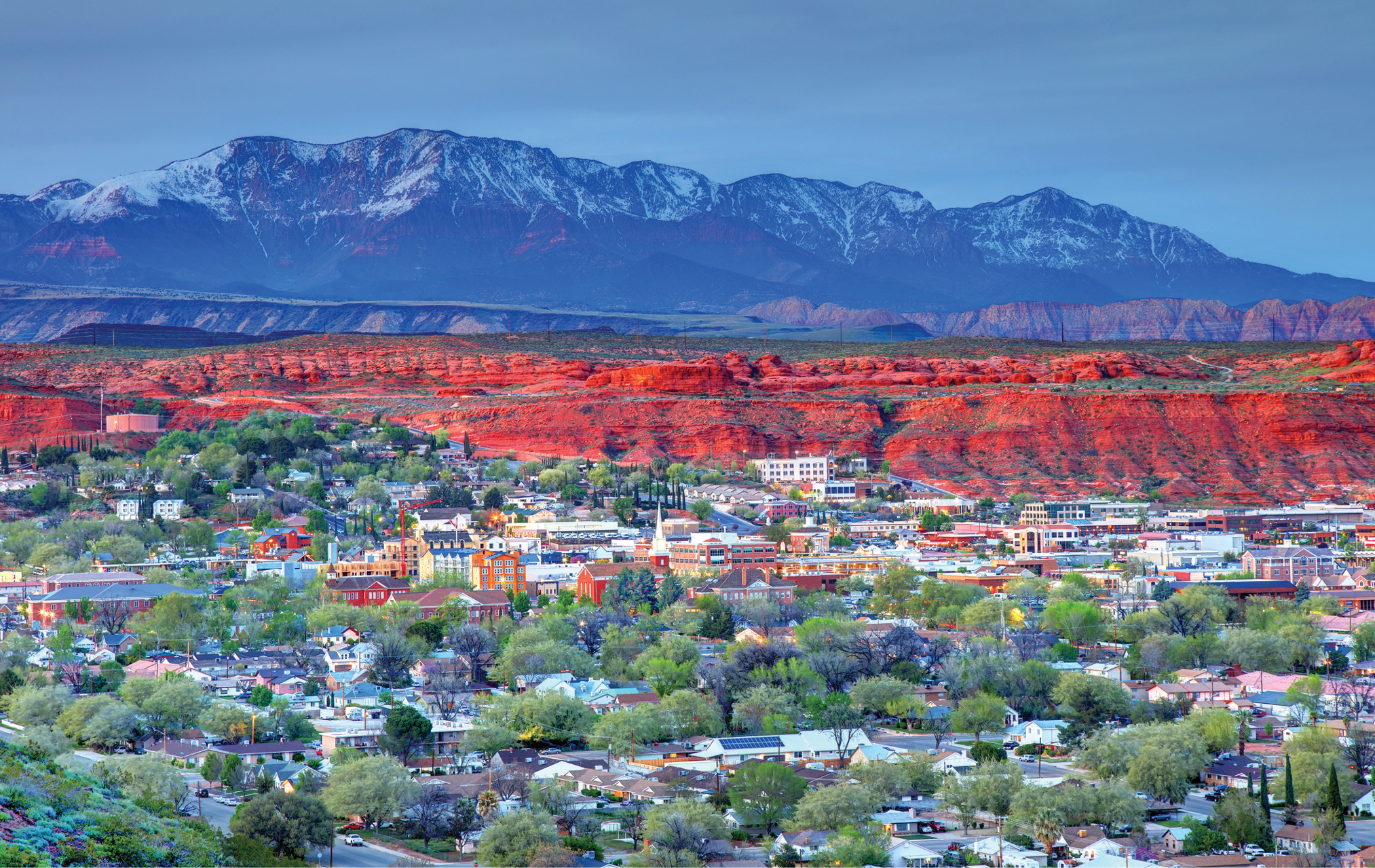 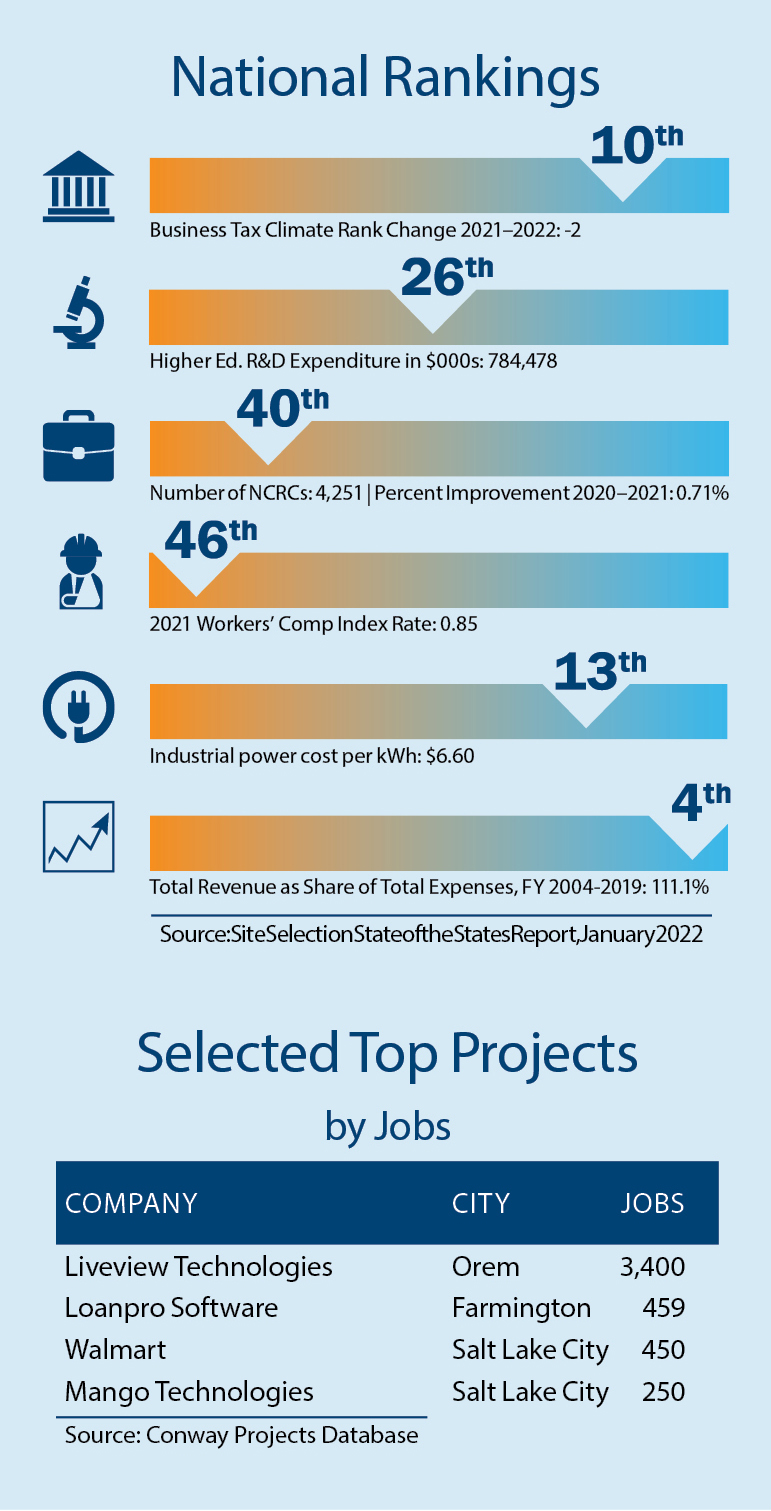 he former Dixie State University in St. George, Utah, now is Utah Tech University. It had to go through the state legislature, but local opponents of the name and its association with slavery won their years-long battle last November against holdouts bound to uphold the memory of the cotton growers who first settled the region. The nearby Dixie Technical College, not to be confused with Dixie State, has no apparent plans for a name change and faces no apparent pressure to follow the Dixie State lead.

If there is an inference to be drawn from that, it might be that St. George, a perennial contender in the Milken Institute’s ranking of top-performing small cities — No. 2 on Milken’s list for 2022 — is moving ahead with due deliberation, even as certain business leaders say that that it has some catching up to do. Down in the desert at the very bottom of Utah, it is not the Silicon Slopes. St. George is closer to Vegas than to Salt Lake City, and shares similar, scorching summers and all manner of red, rocky outcrops, shapes and protrusions.

Catching up probably can’t be avoided, though. For some of the same reasons that it brings in lots of tourists — rugged, natural beauty and a generally slower speed — St. George is one of the fastest growing metropolitan areas in the country, according to the U.S. Census Bureau. From 2010 to 2020, only the Villages in Florida and the Austin, Texas, metro grew faster than did St. George. Today’s population is 85,000 with a bullet.

Tech Ridge could be both a catalyst and an indicator. Sprawled across a narrow bluff above St. George, the master-planned mixed community on 180 city-owned acres is a bet on the continued growth of St. George’s digital and aerospace sectors.

“By far the greatest place to come to in Southern Utah,” is the bar being set by Isaac Barlow, Tech Ridge managing partner. Barlow also is CEO of busybusy, one of the roster of local startups whose numbers have grown to where Tech Ridge is not just feasible, but perhaps a necessity for an evolving local economy branching out from tourism and construction and sliding from heavy manufacturing into technology.

Brian McCann is one of the brainiacs who might in the past might have eschewed St. George for Salt Lake, Ogden, Levi or even San Francisco, but instead is leading an aerospace startup in his hometown. After St. George-based RAM acquired Airborne Environmental Control Systems in 2020, McCann renamed it to Intergalactic and moved operations from Seattle to St. George as CEO.

“With the remote work movement, St. George has a lot to offer people,” McCann tells Site Selection. “A lot of people have wanted to live here. They just didn’t know how to work here. Now, we’re offering them both. And that’s a benefit to us because our costs of being here versus in a traditional aerospace hub like Seattle or L.A. are a fraction of the price. And now we also can attract high-level talent here, because they don’t have to live here if they don’t want to, even though once they come here, they’re pretty attracted to it.

“So,” McCann offers, “you can work from home if you want to, or you can come live with us in this little paradise here in southern Utah.” Visually, he says, it’s “the closest thing you can have to Mars on Earth.”

It’s a fitting metaphor. Because space, says McCann, “is the largest emerging market since the internet. There was a lot of disbelief that it would go anywhere, but you can just look at the money that’s pouring into space from Silicon Valley. It’s just a different environment now. And it’s what Intergalactic was formed to do, which is to bring forth the next-generation thermal management technologies for space.”

Maybe a Fit for the Times

Tech Ridge envisions 2,400 hundred residential units, largely geared toward entrepreneurs, engineers and employees of ventures such as Integalactic and other signed tenants that include St. George startups Zonos — which recently raised some $70 million — Vasion (business processes) and Barlow’s busybusy. Projected office and retail space is over 1.5 million sq. ft. with a network of walking paths and gardens co-mingling throughout. 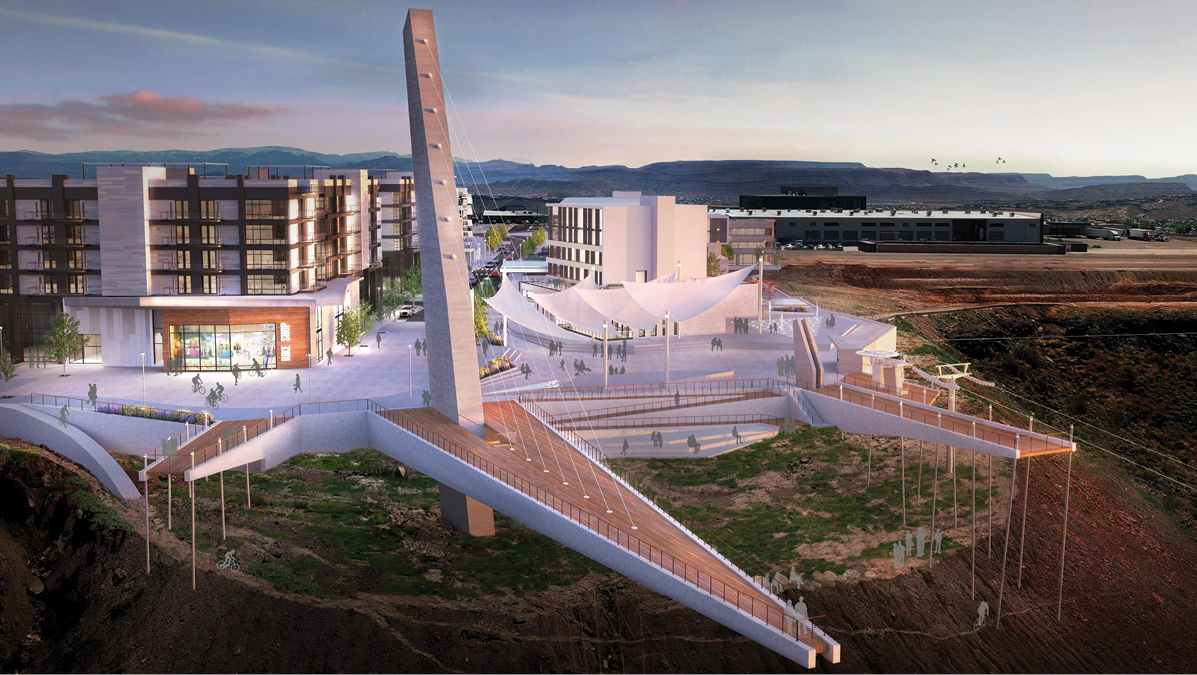 Tech Ridge could be both catalyst and barometer for St. George.

Under a 20-year agreement to develop city land — formerly an airport — Tech Ridge is bound to meet development goals and deadlines. Suffice it to say, it is long-term plan with grand ambitions.

“The timeframe,” says Tech Ridge Asset Manager Mike Gutierrez, “is tough for the entire development. It will depend, at least in part, on economic cycles. But in the next 60 days,” Gutierrez told Site Selection in late April, “we’ll be breaking ground on over 200,000 square feet of office space.”

Zonos is among the initial tenants to be working out of temporary quarters at Tech Ridge. As other new tenants have moved into makeshift containers, expanding Zonos occupies a hangar converted into creative office space. Zonos is to anchor Skyview, the initial phase of the Tech Ridge project, beginning in 2023. A second phase of office buildings is scheduled to open the following year, says Gutierrez.

Take the frenzy, cost and uncertainty of, say, Silicon Valley, then dial that down a notch to, say, Salt Lake City, and the next notch down might look a lot like St. George. And St. George might look increasingly like a fit for businesses sensitive to workers’ increasing expectations for balance.

“People here can enjoy the environment around them and not feel like they’re in the rat race anymore,” says Don Willie, president and CEO, St. George Area Chamber of Commerce. “I think the pandemic changed the dynamics of our situation, and I don’t think it’ll go back. People are going to keep coming here and then find a way to relocate. It’s not going back.”